The second point why I think onboard sound is problematic is the current graphics cards and their interaction with the analog audio branch. After all, after the DAC, the signals have to be processed and amplified by analogy. Here, the industry likes to advertise with high-quality capacitors and other gods, but often forgets enough an elaborate shielding and consideration for the functional board layout. Don't you think so?

For a better comparison, let's start first in absolute idle, where nothing moves on the screen and even the mouse has a pause for transmission. What we now see as measurement curves is the so-called foreign or Interference voltage. Transients can even be cruel! Again, I do not measure myself with the rather simple test setup, but it is always accurate enough to be able to make a reliable statement with it. The lukewarm ness controller is located in the position where the distortion-free maximum level was previously determined.

But what happens if we run the graphics card at full load with maximum FPS number? I determine the values with Witcher 3 in the menu and limit the FPS number to 1000 FPS. If you run the game normally at less than 100 FPS, the peaks for Vrms are at the same level, but the frequency of these peaks is lower. Logical. To do this, I set the audio output to zero in the game, so that I measure only the foreign noises at the output again.

The tangle of curves to be considered at the Oszi also harmonizes perfectly with the "coil fist" and the power consumption peaks, which clearly identifies the voltage converters of the graphics card as the cause. At 0.0151 Vrms, the value of 500 ohms is now over 6 times higher than in the idle, which gives a ratio of just over 1:83. At 32 Ohms it is with 0.0095 Vrms then approx. 5 times what was measured in the idle, resulting in a ratio of 1:49. Here you can quickly get into the perceptible area.

If you have been careful, you will also notice that the above values coincide with my realization that the setting of the volume control for the speaker/headphone output does not really matter when the useful signal is not available. Unfortunately, you always hear these unwanted mixed products!

If you connect an analog amplifier, you should always choose the distortion-free maximum level on the PC and better control it quietly on the speaker. This significantly increases the distance between the signal and the interference voltage. This is only cosmetics, but at least helpful.

Don't be afraid of the unwieldy term, I'll explain it to you. Intermodulation (IM) is the origin of new (mixed) frequencies when at least two (or more) different frequencies enter a system with a nonlinear transmission function and are then processed (amplified). On the one hand we have the audible frequency band of what music or games provide us, on the other hand there are e.g. the voltage transformers, which are connected to approx. 400 KHz clocks. But it's not just this one.

However, the resulting mixed products quickly lie in the audible range and you "hear what you see". The so-called cross modulation is a special form of intermodulation and arises e.g. nonlinearities of the amplifiers. The higher the quality and shielding of the analog signal ling path, the lower the levels of these mixed products ("wave salad"). But that's exactly what you almost always miss with motherboards.

I do not want to make it too complicated, but I have a nice example of how such a mixed product can negatively affect and even distort our original signal. First of all, I set a 50 Hz signal in the idle and control the amplifier in such a way that the curve is not distorted yet: 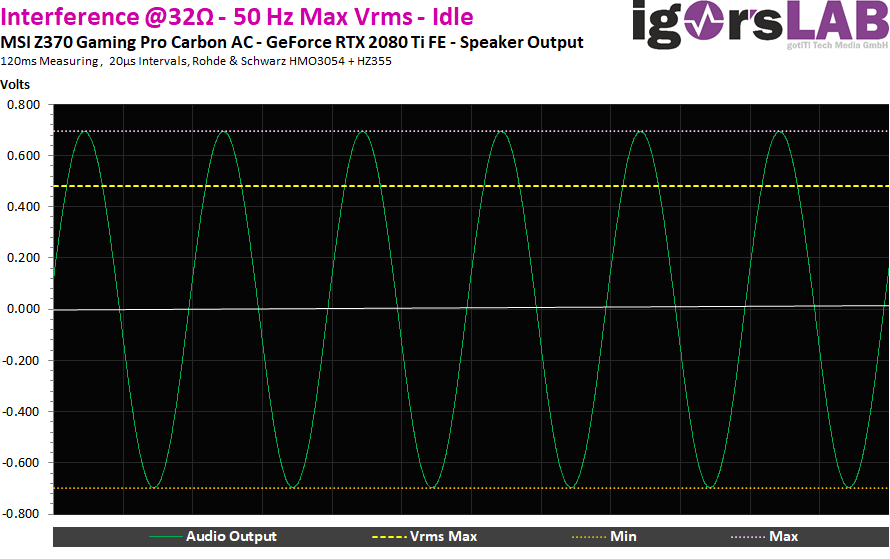 The waveform is perfect and you can hear exactly what you expect. What a beautifully zoomed out and clean half-wave looks like, we had on the previous page.

But what happens when I start the game like I do? Instead of the gaming sound, I just let the 50 Hz signal continue to run and record this curve as well. If you look closely, you can see unsightly fringes in front of everyone in the tips of the curves. But unfortunately they are not only there. 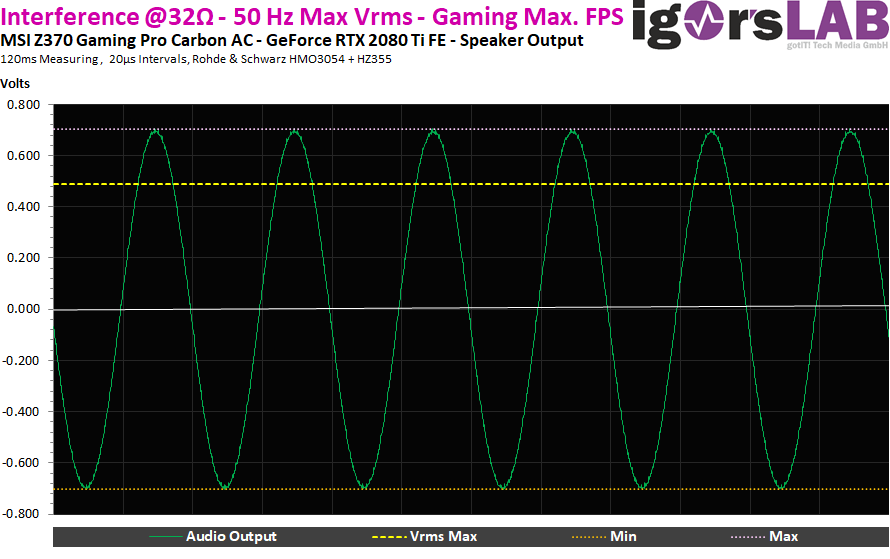 Since it is difficult to see, I zoom out a half wave again. But what I see now has nothing to do with a clean 50 Hz curve! The intermodulation also influences this frequency and as a product a hibernating curve is created! This is annoying, but no longer to fix tricks and tricks. 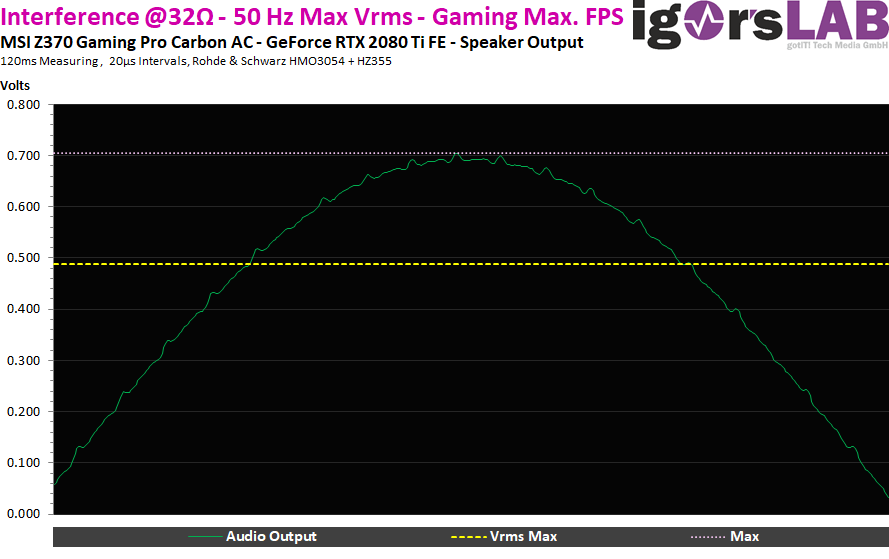 Half at the interference distance still the trick with the volume control, the falsification of the original signal can not be fixed! Even the most expensive DAC doesn't help and the goldiest capacitors become bored extras when the graphics card strikes so hard. And to Nvidia's honor, it's fair to say that AMD's Vega is no less hard to beat.

Let's get to the internal solution and install the Creative Sound Blaster X AE5. Now let's look at the 50 Hz curve. This looks much, much better, but… 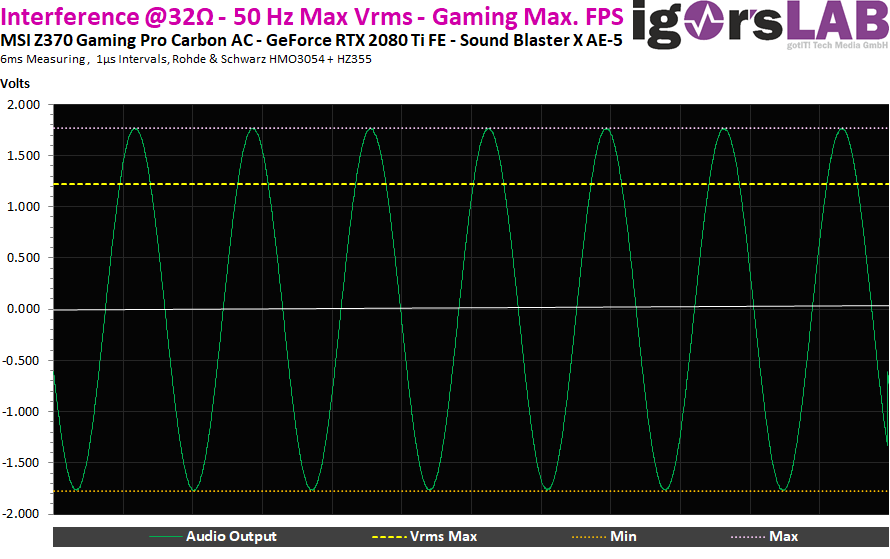 … It's not quite perfect either. But it is enough, because anyone who hears this can have his ears golden at the expense of the state. 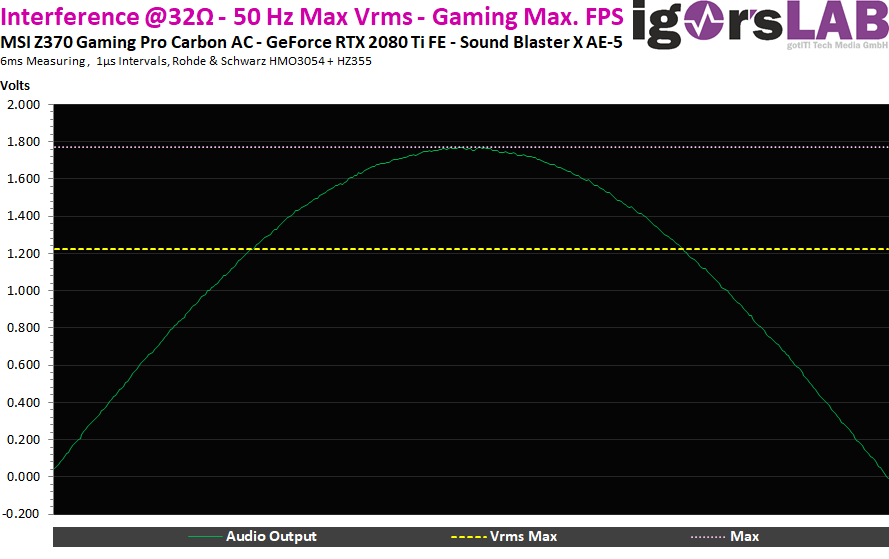 What should be particularly disturbing here is that the back of the sound card does not have a shielding backplate, but the board is fully in the "radar" of the graphics card. The great shielding unfortunately points towards the power supply, how practical! Please think along and improve! We also see very nicely that we can have a whopping 1.2 Vrms at 32 ohms here, if you need it. Runs! 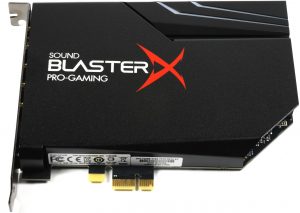 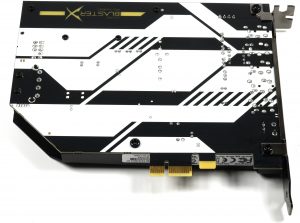 A real decoupling can only be done at the digital output and with an external sound card (USB, SPDIF), which can then certainly cost a little more. I save myself these curves now, because they are as smooth as a baby popo and thus as you would expect. Visual impression see previous page.

If the motherboard is not really one of the extra class, the chaff separates from the wheat at the latest when using a potent graphics card. The annoying chirping is even on the desktop when scrolling and the workaround with the adjusted levels only helps against the interference voltages as such, but not against intermodulation products, which unfortunately can also audibly distort the original signals. Everyone will of course react differently and only the trained or trained ear will normally hear it out. Unfortunately, it's just nice to be different, one way or another.