I now generously explain the fed-in signals to the ideal case and deliberately leave things, such as the graphics card under full load, out of the picture. That will come later. First of all, let's see what comes out of a normal, average motherboard in the first place and why different headphones can possibly reach significantly different volume levels.

This is precisely where a very important manufacturer's specification comes into focus, which our dear trough manufacturers like to conceal. One thing I'm going to do: the appropriate impedance doesn't have to mean that the headphones (or the headset) automatically play well and loudly enough!

The most important factor for the harmony between amplifier and headphones is its so-called sensitivity. This indicates which output power an amplifier must deliver at least at the impedance of the respective headphones, so that it then reaches a certain volume level.

A suitable headphone amplifier therefore offers both sufficient maximum power and amplification at the output to achieve the desired power level with a specific source at all, because the sources also vary greatly in their level, regardless of whether in-game sound or external players (CD, BR).

To be brief, a quiet source must be able to be amplified well enough for the headphone amplifier (onboard or external) to reach full control at all. However, this full control must also be sufficiently high to get the headphones to a desired volume level. Otherwise, it either remains quiet, or it already distorts, because the amplifier has to oversteer in order for it to get loud at all.

At this point, I do not presume that I want to provide exact measurements of the cloning factor for the motherboard, but I also want to make it clear and prove with measured values how beautiful and how often marketing bubbles can run into the void. If the right output power is missing, the best Japanese gold capacitors are no longer of any use. And that is precisely what this is about now

What do Vrms mean and how do you calculate the output power?

Power is the product of voltage and current. But since I measure here only tensions and no currents, one can (and must) change the formula quite simply, because I consciously work with (stable) ohmic load resistors, which I know. And don't worry that it's going to get complicated now, because it's really simple! Let's just look at the measurement on the motherboard, where I determined the maximum distortion-free output voltage Vrms of this model at 1 KHz and 32 ohms: While the upper graph shows several waves of the 1-KHz-Sinustone, I zoomed out a half wave for the lower graphic, also to show that the curve is still displayed reasonably cleanly in the apex. So nothing distorts here and I can use the determined value for Vrms with a clear conscience. We can also see very nicely in the picture that the maximum voltage is actually 0.678 volts. 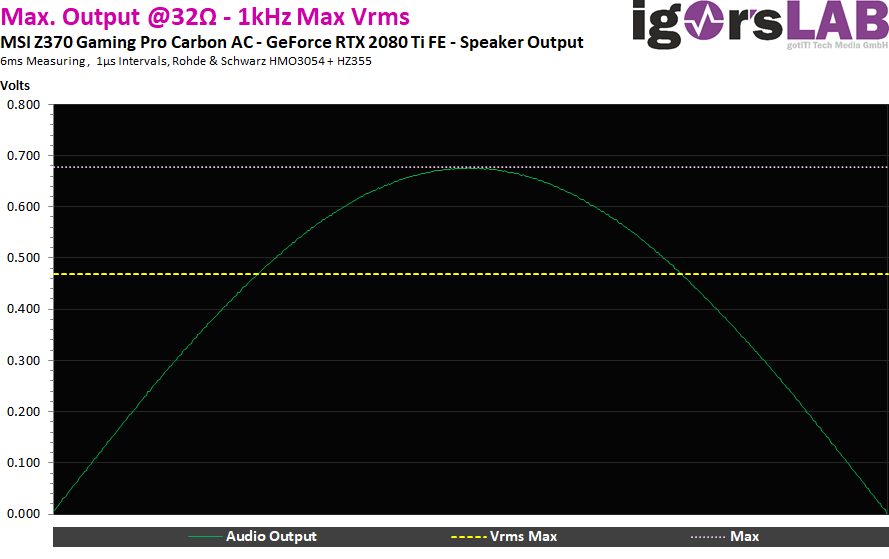 However, since the effective voltage Vrms has been used for years (root mean square = square mean) and I want to remain comparable, I have fixed this calculation firmly and from now on I only refer to this effective value. The motherboard thus delivers a maximum of 0.4691 Vrms at 32 ohms. But what does this mean for the output power? If you now remember the famous URI triangle of Ohm's Law, you can easily change the formula.

Now we at least know why the wattage data in RMS is used on the speakers and amplifiers. Even before approx. 20 years and earlier, output power was given in watts of sine-continuous tone power at 1 KHz. But since almost everyone has now bowed to the diktat with the RMS and thus the chaos is perfect for the layman, I also stick with the Vrms and Watt RMS, even if it looks a little more complicated. 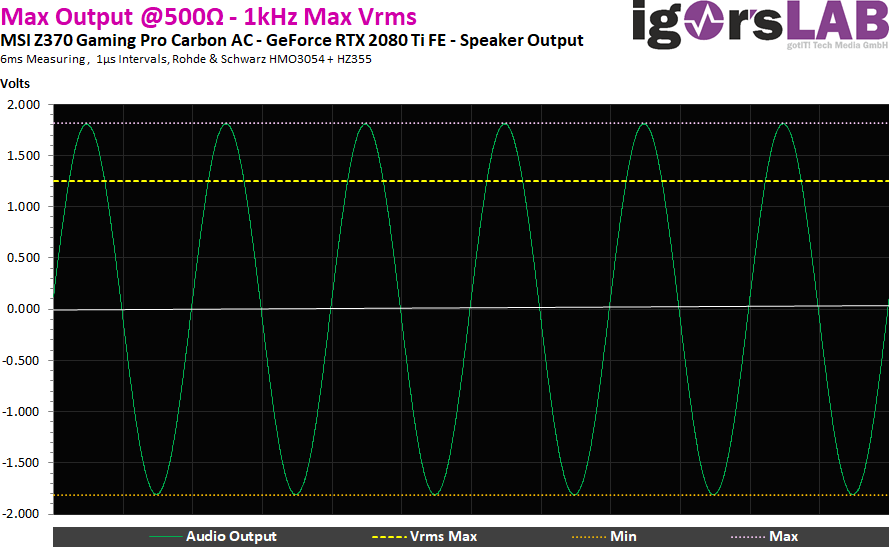 Since the manufacturers often only specify the power in watts and deliberately omit the abbreviation RMS, I will handle this in the following text so that the quoted manufacturer specifications and the curves do not confuse us. However, this does not make it any more correct.

Good amplifiers therefore have a so-called "gain" switch, which ensures that the voltage at the output is increased by a resulting, higher gain factor. This is followed by an increased output power, which is required for higher volume levels. However, the gain switch is primarily intended for a voltage increase in order to achieve the maximum output power at higher impedances.

With output power of less than 10 mW, you rarely reach the desired volume level and those who want to use high-impedes headphones are almost punished with the onboard sound. This sounds thin and wrong and also distorts the smallest sneering! If you buy headphones, the so-called sensitivity is a very important indicator of how loudly it can be operated in the end, i.e. which sound pressure level SPL (Sound Pressure Level) it can still reach cleanly at which amplifier power.

But you don't always produce a certain sound pressure in the same form. A lot depends on the recorded material. So if you have an average, well-tolerated level (SPL) of e.g. 85 dB (child-proof and not harmful in the long term), e.g. in classical music and its high dynamic range for the peak values, add 25 to 30 dB. This also applies to good games with 12 to 18 dB. Pop music, on the other hand, is usually at "only" 8 to 12 dB serve as a fist formula.

Unfortunately, for a given SPL value, the manufacturers either specify milliwatts (mW) or required the effective voltage (Vrms). Or nothing at all. And now we also know why I had to reckon with you in the previous section, because now you can't care less about the different information, as long as something was given! We can now convert it ourselves.

My Beyerdynamic Amiron Home is e.g. with 102 dB / 1 mW, which would theoretically be even more with the 3.15 mW of the motherboard at 500 ohms, because the impedance of the headphones is 250 ohms, so still significantly lower.  But – and now comes the nasty but: we also need the Peak-SPL for a good dynamic reproduction without distortions! In order, for example, to To get the 115 dB (85 dB average + 30 dB peak mark-up), I would need almost about 20 mW, which the onboard sound can not deliver at all.

Depending on the headphone quality and the resulting sensitivity, the 115 dB SPL required up to 1 watt output power on the required impedance! Onboard sound (with a few exceptions) can never deliver anything like this! And now we also know why this doesn't work with the dynamics on the motherboard and why some things just sound cruel, even have to sound downright. The better (and more sensitive) the headphones, the better it harmonizes with the motherboards. But it's almost always not good, just less bad.

I've prepared something for the all arithmetic lazy… The first table shows us rather bad headphones with a sensitivity of 85 dB/mW up to 94 dB/mW and which amplifier power to set in order to reach maximum sound pressure levels between 90 and 115 dB. Whether the parts will endure and survive at all is, of course, another matter. Here I would have the slightly better headphones, which are limited with the output power. Which should also make the sense of a good headphone amplifier clear: it always delivers a sufficiently high output power or Vrms to be able to play pieces with high dynamic range without distortion and limitation. Sound back and forth at nursery volume, here it is about the exhaustion of the technology. This is precisely why the solution approach of many blind tests to use the highest possible high-quality and expensive headphones for such tests on the motherboard is completely misleading.

Because these very high-priced specimens are extremely sensitive and require significantly lower output power than the usual suspects with less than 100 dB / mW. What goes so well with the noble listener on the motherboard, as long as you listen to music in the idle, goes with the normal headphones magnificently into the pants. And most of the time, they are nams up for the dilemma! That's why I always measure headphones on a high-quality device in order to exclude exactly this problem from the outset.

The more insensitive the headphones are, the better the headphone amplifier must deliver. And this is where the low-cost on-board solutions almost always reach their limits. By the way, this also applies to many headphones with built-in USB sound card, because the provider does not consider what their headphones really need. But there would really have been the point where the industry is playing along again and offering things that can also be used in good conscience.

That's why I think the usual tests of motherboards with a few OC benchmarks are also somewhat incomplete and I can only advise colleagues to measure the output performance and Vrms. Because exactly this information is essential and yet never found in the data sheets of the motherboards.