As already mentioned, CTR 2 has the ability to switch between the different profiles dynamically, depending on the parameters set and the current load of the CPU. We’ll now look at how to get our saved profiles to interact with the CPU’s standard boost algorithm (Precision Boost Overdrive). 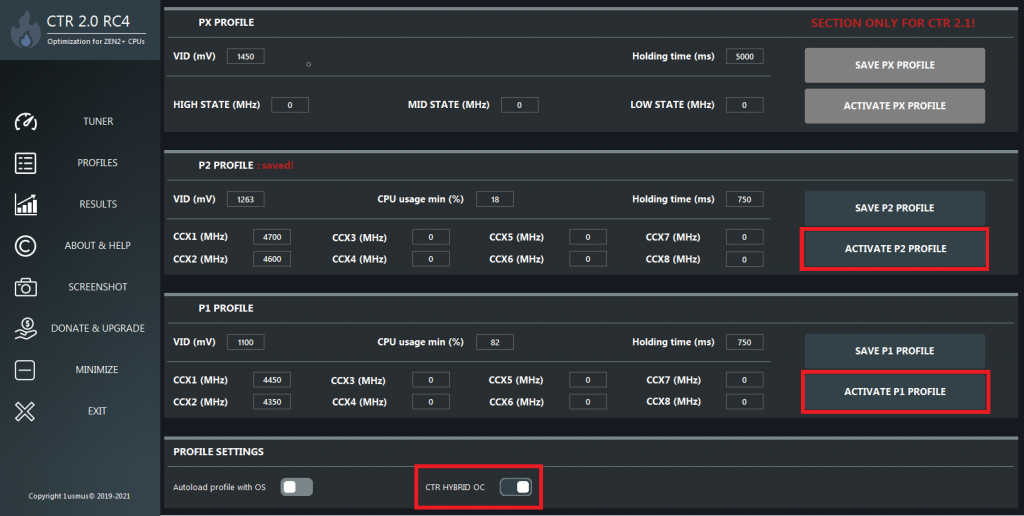 First you have to activate the switch “CTR Hybrid OC” in the “Profiles” tab and then activate P1 and P2. Now the CPU usage thresholds and holding times come into play, with the default values already working very well for my CPU and usecases. Short explanation : Below the CCX usage min threshold the CPU is operated in “P0” or PBO, so that high single-core boost clock rates can be achieved. A profile is always active only over its CPU usage min (%), goes immediately to the next profile at higher usage and waits the holding time (ms) before switching to the previous profile.

The sequence is P0 -> P2 -> P1 with increasing load. By the way, if we want to have only one profile in use and e.g. P2 is empty, CTR switches only between P0 (PBO) and P1 according to its thresholds and ignores the thresholds for P2.In the same menu “Autoload profile with OS” can be used to activate the start and activation of CTR in the Windows Autostart. After activating Hybrid OC and applying Profile 1, the CTR Hybrid OC mode is displayed as active in the log. Now we can test whether CTR behaves as promised. 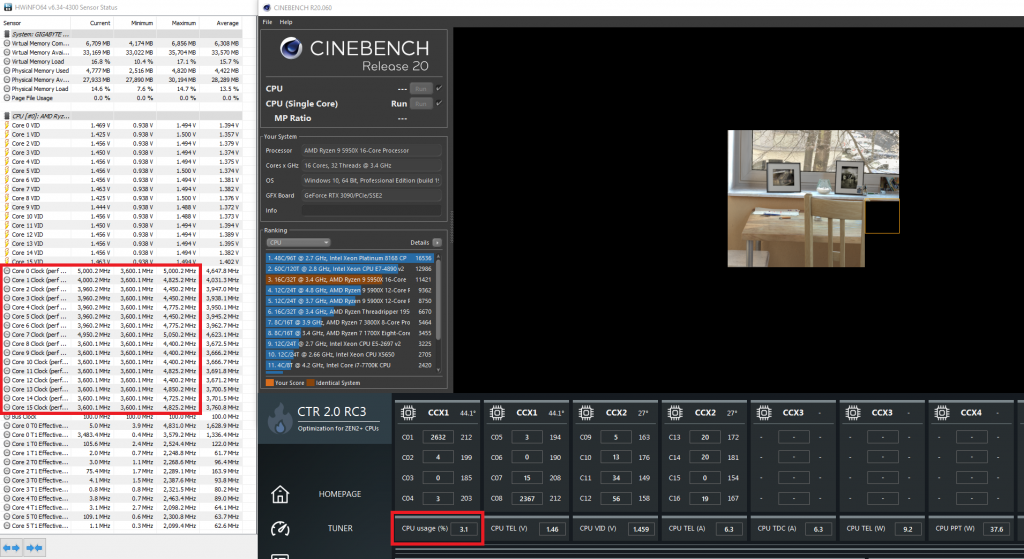 If we now start a single-core workload, like Cinebench R20 Sinlge Core here, the CPU remains in the P0 profile, i.e. AMD’s standard Precision Boost Overdrive mode. Accordingly, clock rates of over 5000 MHz can be achieved with my 5950X. While the two cores “1” and “8” from the first CCX with the highest CPPC tag happily boost themselves above 5 GHz, the CPU usage remains at 3-5% and thus the CCX usage at 6-10% according to Adam Riese. This is because although HWinfo reports 3600 MHz for cores 9-16, in reality the cores are parked and effectively in power saving mode. Seeing that alone, even though an OC tool is active, is cool to me as a hardware nerd. 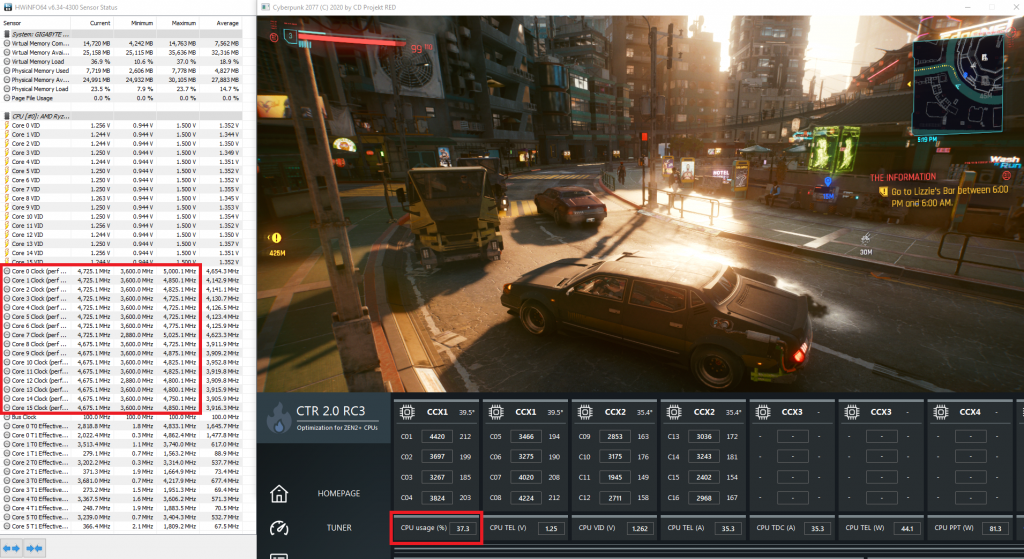 But it gets much better, because as soon as a load is above the CCX usage min threshold of 25%, CTR automatically activates the static OC according to determined profiles. However, since Cyberpunk 2077 only generates a partial load of 30-50% in this case – below the CCX usage max and CPU usage trigger thresholds, CTR can even enable the P2 profile with about 275 MHz the higher clock speeds than P1, which can definitely be noticeable in the FPS in such a CPU-dependent game. If you want to learn more about Cyberpunk 2077 and its penchant for fast CPU and RAM, you can read about it again here and here. 😉 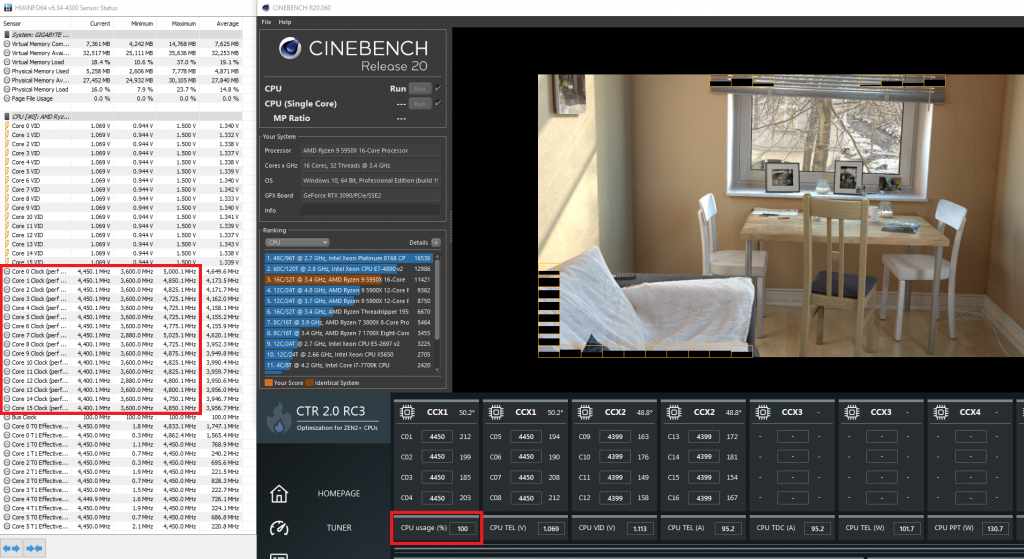 If we now start an all-core workload, here Cinebench R20 All Core, and thus put the CPU under full load, CTR automatically switches to the more conservative P1 profile with a lower clock rate and voltage for maximum efficiency. Switching between the profiles works completely automatically and without any manual intervention. Also, in the almost 2 weeks that I was allowed to test the tool before release, there was not a single crash when changing profiles, as you might think at first. Here the CTR again benefits from the new direct communication with the SMU, which according to Yuri works 400 times faster than the old way in version 1 via the Ryzen Master. CTR 2 knows well in advance when a load change is imminent and can react preventively.

Here, I’m afraid I also have to pick up where I left off in the introductory update on the first page. Of course there is always a residual risk associated with overclocking, but if an OC software has documented protection functions, they must work in any case! Fortunately, CTR doesn’t leave any traces and so even the isolated silicon victims of CTR 2.0 RC3 should be able to RMA the CPU through AMD. What the reason for resturcturing the protection function in the last version was, can’t be said definitively. Somewhere between language barrier, misconceptions about AMD AGESA, lack of trust in community feedback, and shirtsleeved software development processes, I think the answer lies. Either way, it’s not supposed to happen.

Accordingly, we can’t blame the one or the other user if he deletes CTR from his system for the time being and prefers to keep his distance. That’s what we reviewers and testers are for, and the tinkerers in the community who are willing to experiment and accept a certain amount of risk. Currently CTR is not yet the “OC tool for everyone” that it should be. The idea itself to get more users excited about overclocking and to lure unused potential out of everyone’s Ryzen CPUs is good, but it will take some time and a lot of testing until the feature set and quality of the software will get there. There are already enough new features on the roadmap and with each release hopefully some trust of the community in CTR will come back. 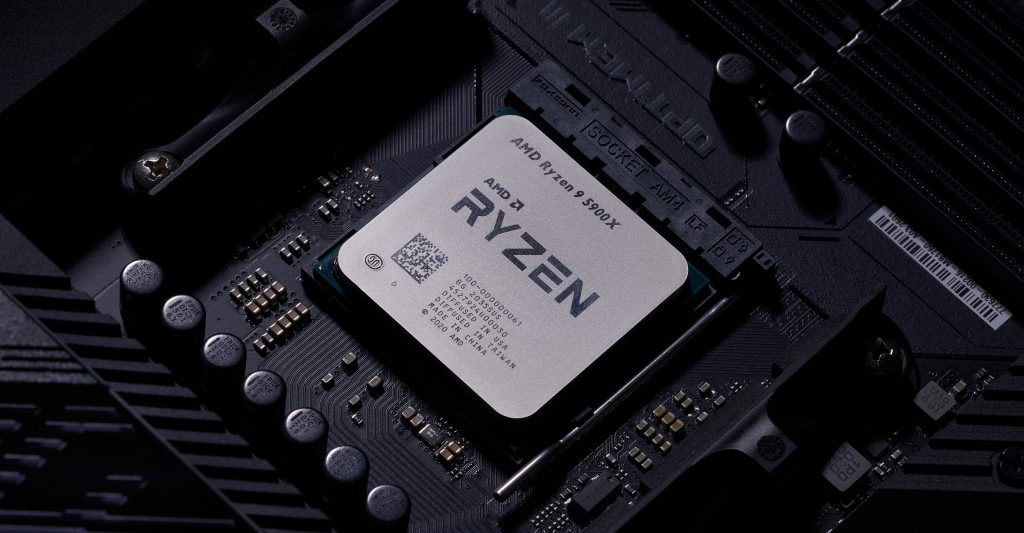 Unfortunately there is still no “AVX Heavy” test mode. Prime95 Large-FFT and Cinebench R20 are not definitive stability tests for all use cases and even with some games like Cyberpunk 2077 with short but intense AVX loads, it can already lead to instabilities with an “AVX Light” tested profile. Of course there is still the workaround to adjust the profiles manually and add 50-100 mV, but this will increase the power consumption and decrease the efficiency. I wonder if you’re still that far off from the standard AMD’s PBO performance that works in any case?

For the time being we will continue to offer German support for CTR, because the idea behind the software is good and could already convince many users. We hope that upcoming features like the automatic Curve Optimizer in CTR 2.1 will soon bring more advantages and arguments for the CTR and that the software quality will continue to improve. Because it would be a real shame if the rosy times were really just rose-colored glasses. If you have any questions or ideas about CTR or this tutorial, or just want to share your experiences and results with the community, feel free to drop by the forum thread (linked below as comment function). The community and Igor are happy about every new (and active) member! 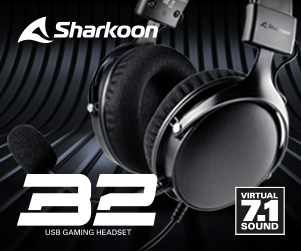 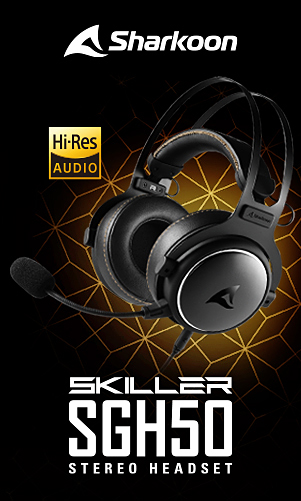