If you were able to purchase an RTX 3090 Founders Edition (FE) at launch for MSRP like I was, you can’t really complain. Ample performance for 144 FPS in most games even at the highest graphics settings and, if we’re being honest, the value increase of over 50%, naturally add to the appreciation. Only, as is so often the case, there are also negative facets, in this case the cooling and especially that of the GDDR6X VRAM.

Nvidia has gone all out for Ampere to make the Founders Edition cooler as powerful and efficient as possible. 3 slot design and even a trimmed board for better airflow are probably the most prominent features of the RTX 3090 variant. And for the most part it works quite well for a Founders Edition, but with up to 400 W TGP, which the pixel accelerator is allowed to use, physics are inevitably becoming a limiting factor. This is noticeable in the noise of the fans, which have to run at over 70% of their maximum speed at full load to keep the heat in check, and in the temperatures of the GDDR6X. As Igor already pointed out shortly after the launch, the memory is also a thirsty part of Ampere and accounts for a significant portion of the total power consumption of the card. The cooler for the radiant memory chips from Micron would have to be correspondingly powerful.

Conditional phrasing intended, because while one could still help oneself with a pad mod on the 3080 and thus macgyver the backplate for cooling the memory on the other PCB side, this spot is already occupied on the 3090, by the second half of the 24 GB of GPU RAM. Nvidia hasn’t skimped on thermal pads with the 3090, but the few square centimeters of anodized aluminum backplate are already overtaxed after a few seconds of full load with this number of memory chips and without active airflow, it’s just a drop of cooling on the hot PCB.

As an example I started a memory intensive task by doing some Etherium mining. Even though the Excavator mining software can only allocate 8 GB of VRAM, i.e. graphics memory, by default, and the GPU itself is only partially utilized, the cooler’s deficit already shows after a few seconds. In HWInfo, which can now also read out the GPU Memory Junction Temperature, we see after a few seconds the 110 °C maximum temperature, as specified by Nvidia and Micron, quasi the TJmax as known from CPUs.

Even though the fans switch into hysteresis here and resemble the noise of a vacuum cleaner at 100% speed, their efforts are in vain, because the airflow of the fans never reaches the VRAM. The temperature doesn’t exceed 110 °C, but only because the working memory is now automatically throttled down, at the expense of performance of course.

Granted, mining is a very memory-intensive use case, but even here just one third of the 24 GB VRAM of the RTX 3090 was allocated and thus utilized. The picture is correspondingly similar in gaming or 3D benchmarks. As a reproducible and representative usecase I used the 3DMark Port Royal today and let it loop for 10 minutes per test run. Test settings are +100 MHz core, +1000 MHz memory, maximum temperature and power limits of 90 °C and 115 % and the standard fan curve.

If you now judge too hastily and attribute the too high heat load to the overclock, I unfortunately have to disappoint you. Although the memory needs a few watts less and a few seconds longer to heat up in stock mode, the maximum temperature remains the same. Actually this is to be expected, because for heat dissipation the backplate without airflow remains a dead end. To be fair, the GPU memory junction temperature can only be read with an accuracy of 2 °C, due to technical limitations of the GPU. In this respect, the difference between stock and OC could also be in the range of a measurement error. 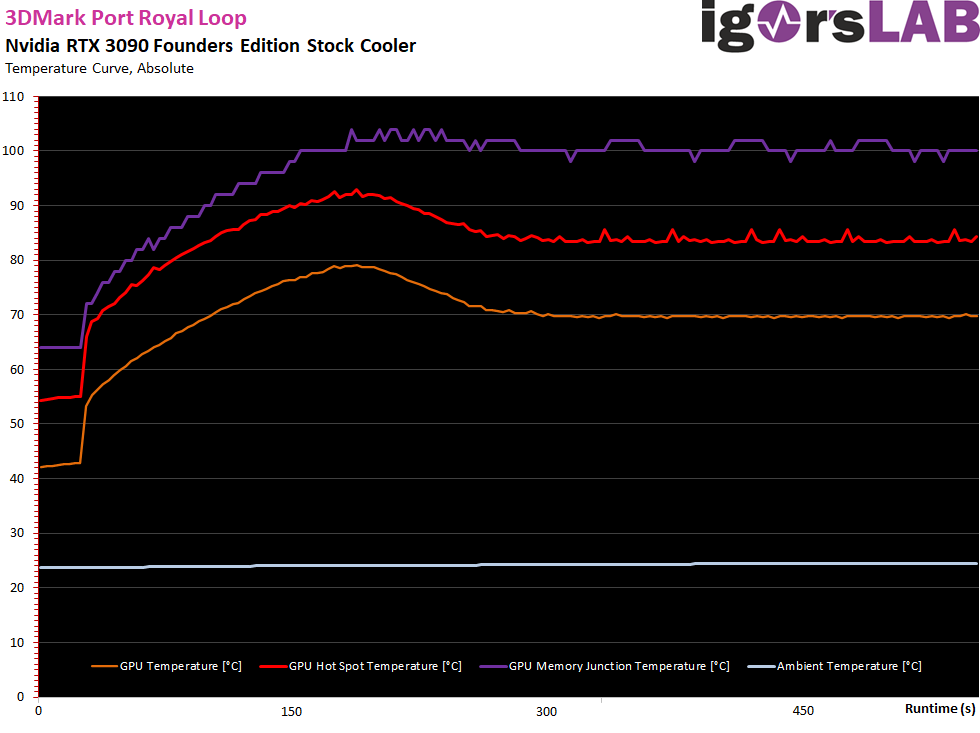 However, the bottom line remains the same: While the GPU settles at a reasonable 70 °C, the memory also reaches the 100 °C mark after a short time in 3DMark Port Royal and stays there. It is also interesting that the standard fan curve has a certain inertia and the fans only switch to their final operating speed as soon as 100 °C memory temperature has been reached – again keyword hysteresis.

It’s just a shame that the memory doesn’t get any of this higher potential cooling power, because it never reaches there. The GPU itself does get cooler, but there’s actually no real reason for that, as it’s actually still fully within the limits at just under 80 °C. Unfortunately, the noise emission is much higher – the result: You can hear the fan hum through headphones and game sound, which can be quite annoying.

Is the Empire striking back? NVIDIA with new chip (GA106-302) and hardware ID against miners and beta drivers!
Cooler Master MasterAir 624 Stealth CPU air cooler in test- A dark threat in large