Powercolor uses the board design of the Radeon RX 5700 (XT) Red Dragon, but despite the low TDP, this rather economical board still uses a 6+2 phase design, in which the 6 GPU phases (VDDC) each drive a single control loop. Doubler or a parallel connection is not found. This task is performed by the IR 35271 from International Rectifier, which uses special gate drivers to drive the power stages as voltage regulators. Each of the VDDC loops is equipped with a NCP302155, which combines the high and low side as well as Schottky diode in one package. This is then smoothed out with a 150 nH coil. A similar control circuit for the SoC is also located underneath with a smaller NCP302045 including a 330 nH coil.

The memory (MVDD) is supplied with two phases generated by an ON Semi NCP 81022N. The voltage regulator is again a NCP302045 with a 330 nH coil for smoothing. The total of six 1 GB memory modules from Micron with 14 Gbps are then connected to these phases. The 8-pin connection runs via a 560-nH smoothing coil to the four connected control loops, as the other two phases are located on the 12-volt rail of the motherboard slot. 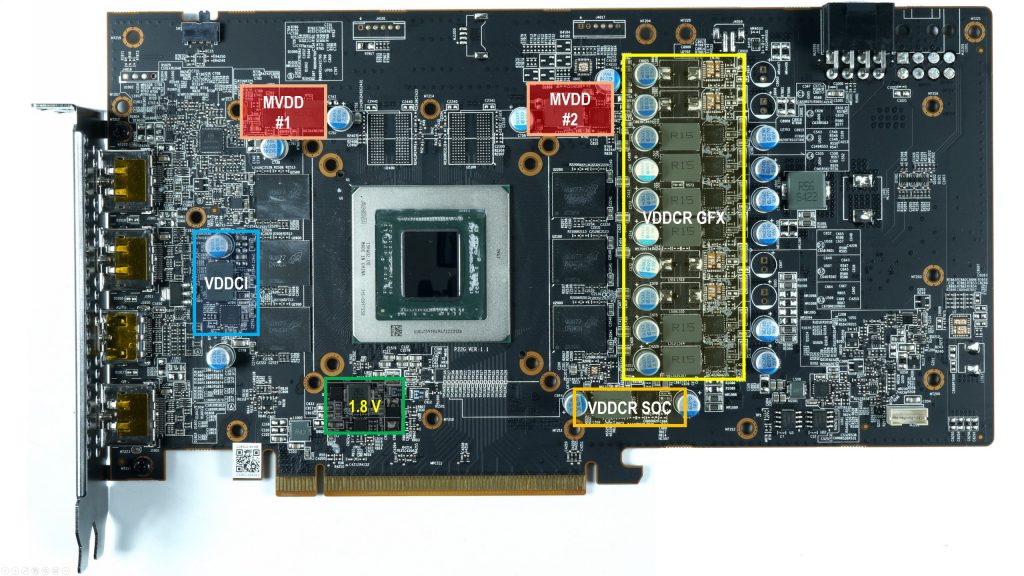 Apart from the PWM controller for the GPU and the SoC, there are only a few active components on the back, including the voltage regulators for various partial voltages. 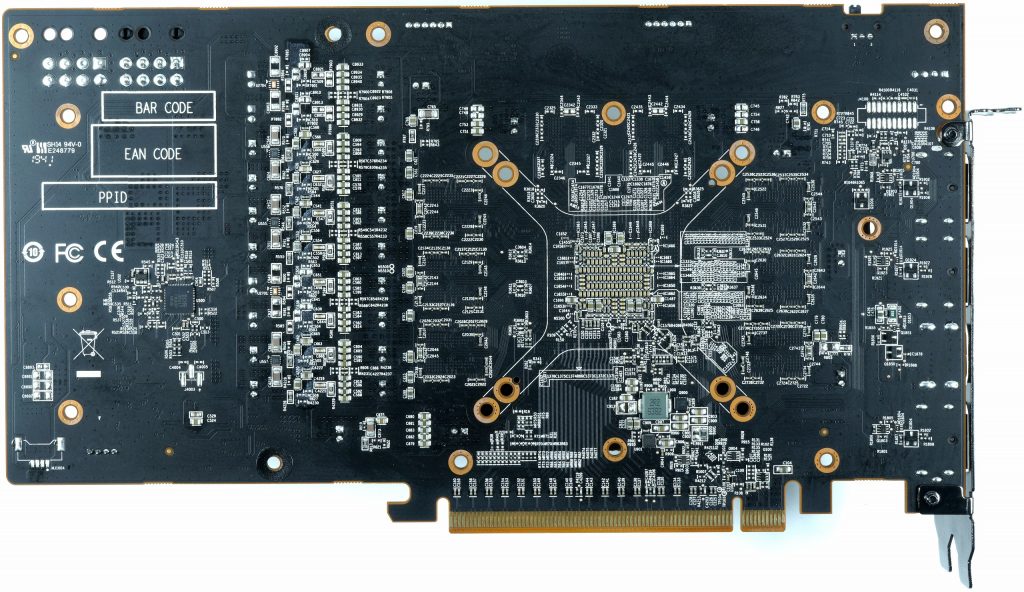 Here once again the summary of the most important components:

The card has a base plate supporting the cooler, in which a copper heatsink has been inserted above the GPU. The four 6 mm heatpipes made of nickel-plated copper composite material have been flanged to the back of the base plate. This baseplate also cools the six memory modules but not the two MOSFETs of the MVDD voltage regulators, which (can) remain uncooled.

The close-up shows once again very well where the one heatpipe has been saved, which will now be on board again from the second delivery.

The voltage regulators are cooled by a separate heat sink anchored in the cooler. Exemplary. The cooling fins are arranged vertically, which forces the exhaust air towards the side of the case and the motherboard.

The backplate actively cools the areas of the board below the voltage converters. All in all, a mature cooling system has been installed on a rather economical board. This makes one hope for a very quiet operation, especially later with a heatpipe more.