Let’s start at idle and low load. AMD has been able to catch up nicely there and it’s really been a long time since an AMD graphics card has taken up so much less power at idle if it hasn’t turned itself off tricky. So you may like this, even if the card with the new BIOS consumes almost 4 watts more. As soon as a bit more 3D load is applied, it becomes almost 158 watts during gaming. I measured this value in both Metro Exodus and Total War. Easier tasks, like WoT, still use a moderate 147 watts. If we compare the MSI RTX 2060 Gaming X 6GB with the measured 170 watts, that’s more than 10 watts less for the AMD card in gaming!

The old BIOS is up to 30 watts less, which makes the card even more efficient, but also significantly slower. These values show very well that a lower clocked “big” chip can work much more efficient than a high speed small chip, which is operated at the physical maximum. At least the argument power consumption in this performance class is now open again. The card is much more efficient than an RX 5500 XT, which is operated with much higher clock rates. The RX 5600 XT, on the other hand, is more of a cosy cruiser.

If we now compare the voltages, we can see very clearly the range within which the specifications fluctuate. The old BIOS is balanced in the course, the new BIOS has more frequent adjustments. 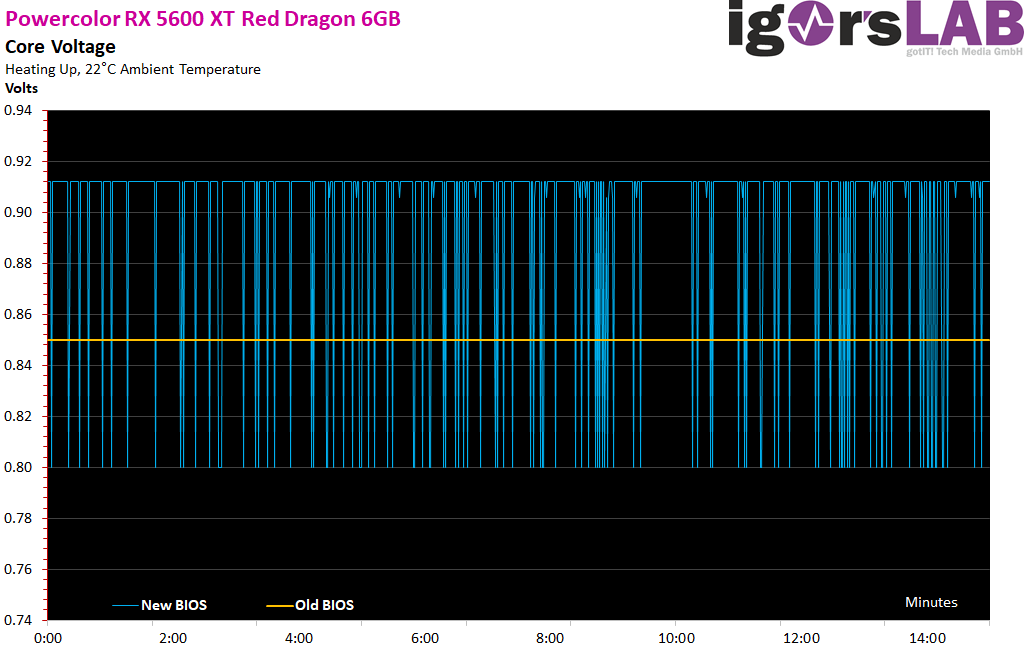 Let us now look at the high-resolution measurements of power consumption. One can already see the type of regulation for Power Tune: 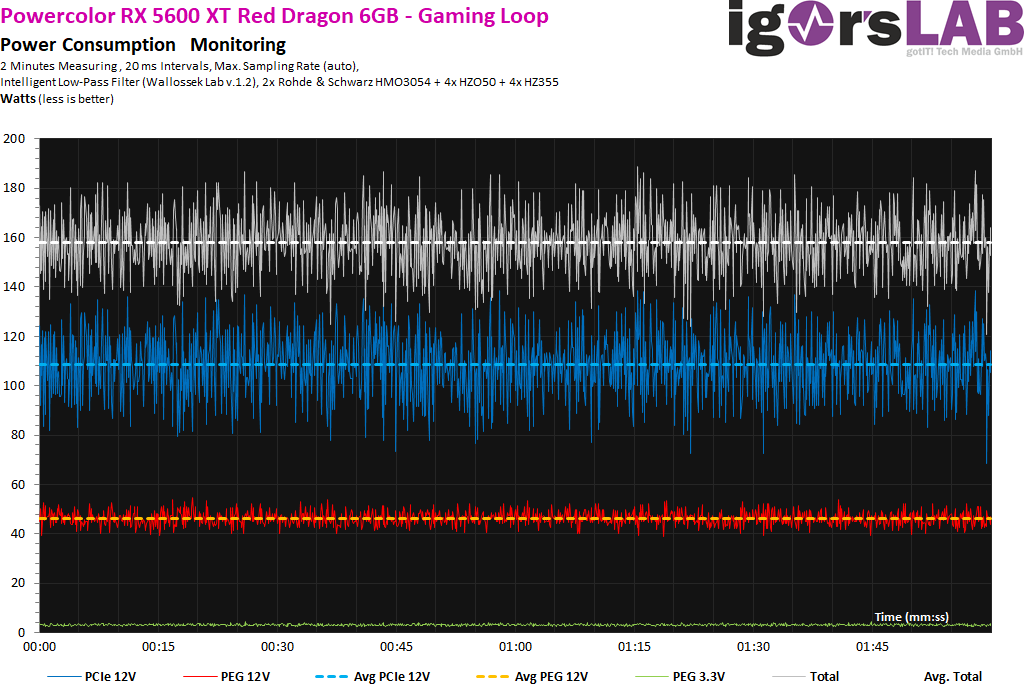 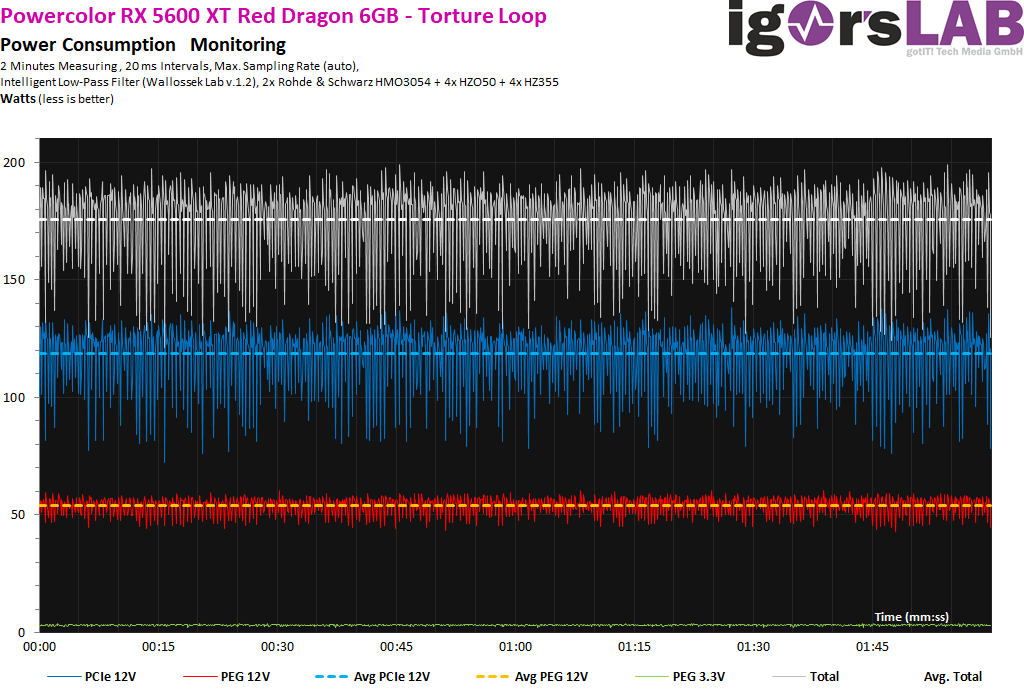 Compliance with standards at the motherboard slot

Even with the new BIOS, the card is in the grass-green area when the motherboard slot is loaded. Here I have also made a diagram for both cards: With the Navi card the load distribution is exemplary, whereby the phases fed from the slot will never lead to an overload, not even with the torture loop. 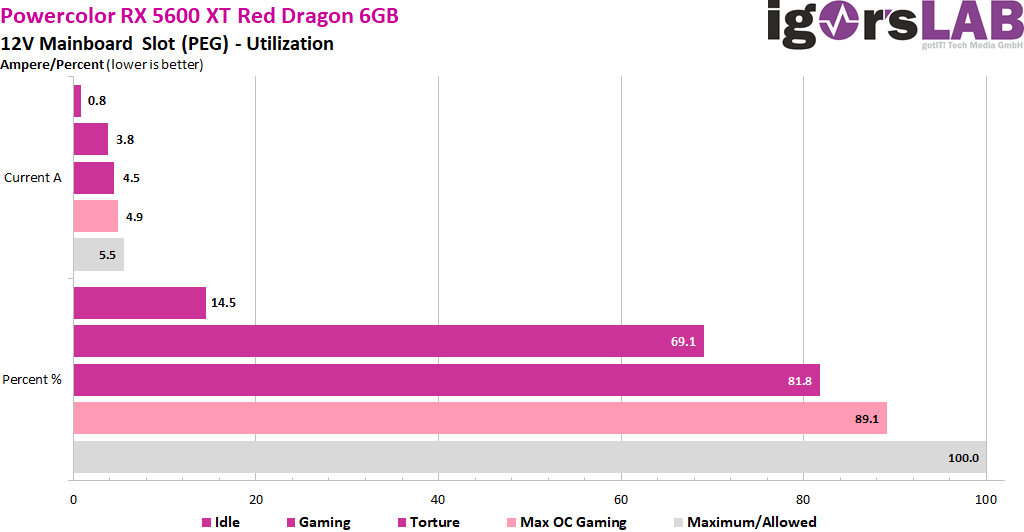 As I have already proved in detail in my basic article “The battle of graphics card against power supply – power consumption and load peaks demystified”, higher loads in the millisecond range do exist for a short time, which can lead to inexplicable shutdowns with unfavorably designed or not appropriately equipped power supplies. In this case, the TBP (Typical Board Power) measured by the graphics card manufacturer or reviewers alone is not really helpful for a stable system design.

Peaks with intervals between 1 and 10 ms can lead to shutdowns in very fast-reacting protective circuits (OPP, OCP), especially in multi-rail power supplies, although the average power consumption is still within the standard. For the Powercolor RX 5600 XT Red Dragon 6GB I would therefore calculate with 200 to 250 watts as graphics card load proportionally to the secondary side total power consumption of the system, in order to have enough reserves for the worst case scenario. A short excerpt with higher resolution is now shown by the 20 ms measurements (10 μS intervals), as I let them run automatically to determine the value: 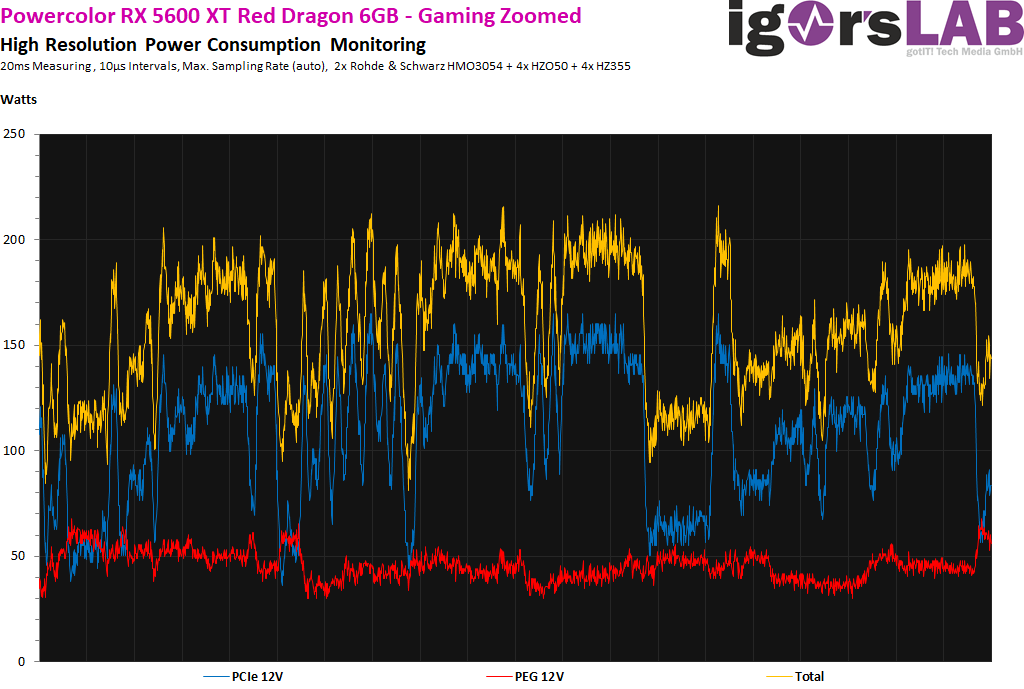 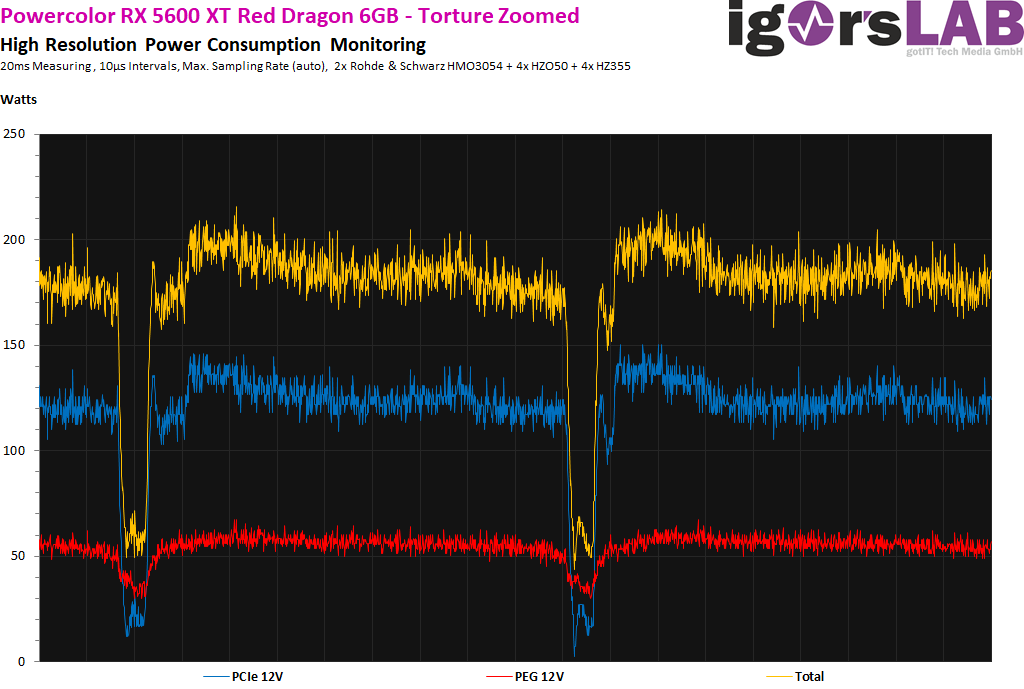