Alphacool has given the Aurora Acryl GPX-A Eisblock a complete redesign, promising better flow and lower temperatures across the block. So why not test the 2022 version together with a Sapphire RX 6950XT Nitro+ Pure, which was already disassembled in the 3D scanner anyway? Of course, I don’t want to spoil anything, but the temperatures as well as the significant clock gain and performance increase made me publish a complete retest.

We still don’t quite have Big Navi on Ice, but at least we can get the chip and its circuit board under water as a well-cooled submarine. Water cooling really makes sense with power dissipations of the entire card of 400 watts and it also creates real added value in the available clock. The cooler was provided to me by Alphacool as part of a compatibility test for testing and will then go out to the community. Compatibility test because it is actually the cooler for the Sapphire RX 6900XT Toxic variants and the Nitro+, and it also fits Sapphire’s new RX 6950XT cards. Today’s test is also a plausibility check, so to speak.

The manufacturer has completely revised the cooler compared to the direct GPX-A predecessor, which will be clearly noticed later in the test, but everything in its time. The edge design of the Plexi front is not really new, only the rest of the substructure has been redesigned from scratch, as was the case with the new GPX-N for the Ampere RTX. What you see at first glance is the omission of the O-ring armada from the predecessor model. But more on that in a moment.

Everything is the same for the accessories, so let’s see what we can find in the box. What you get for just under 140 Euros (predecessor 127 Euros) is a pre-assembled and very cleanly manufactured cooler with terminal including recessed 5V aRGB stripe and matching Preci-Dip adapter, a backplate with cooling function, two rimless plugs including screw-in aid, screws, appropriate thermal pads and decent thermal paste. The manual is available in printed and digital form, exemplary.

With which we can now elegantly move on to the water block. As already mentioned, Alphacool has completely redesigned and simplified a lot of things. Based on the specified leave-out areas of the PCB, it was finally possible to create a solid cooling block with a starting material of 11.5 mm thickness and obviously also to further reduce the residual base thickness above the relevant areas.

With the changed design of the water flow, the feedback from the users, who have been asking for a less restrictive cooler for years, has finally been taken into account. In my test measurements at 150, 200, 250 and 300 l/h, the loss in throughput was around 18 percentage points, which is a very good value for the very balanced and good cooling performance. This cooler can still be used in a system with a weaker pump with only minor performance losses, since the pressure drop is also no longer so extreme.  The upper picture shows the new cooler, the lower of the two pictures the previous model.

The backside shows the material usage very clearly. The new design again allows the GPU to determine the actual footprint without increasing, the slightly lower memory chips and also the VRM again require 1mm thick special pads that are soft enough to distribute the pressure well because the actual gaps are much smaller. Alphacool’s new ultra-soft pads are used here, which can adapt to almost any thickness below one millimeter without pressure and which also adhere perfectly and do not oil out. 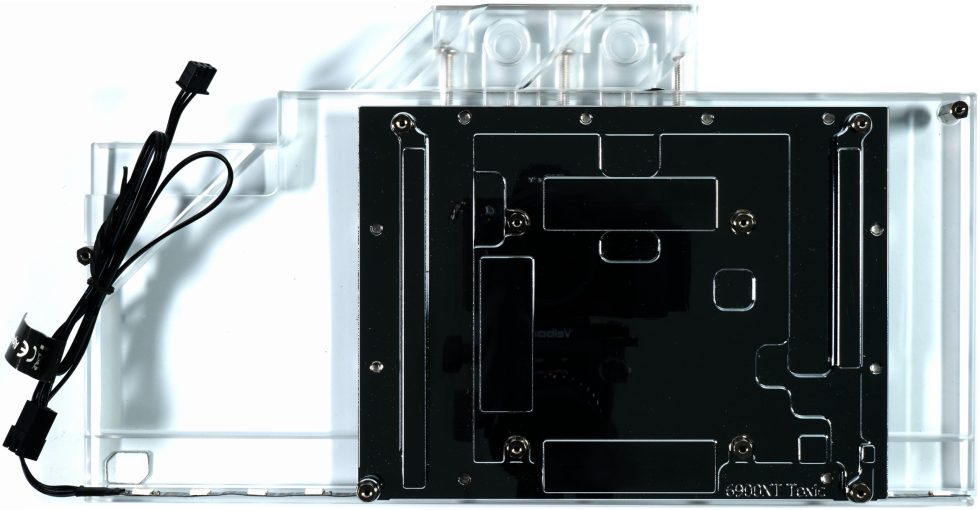 The water block has slightly changed dimensions and is now 25.9 cm long, 14.45 cm high and 25.4 cm thick. The material used is nickel-plated (new process for more acid resistance) and 11.5 mm thick electrolytic copper. The cooling fins are again 0.6 mm thick. Unfortunately, no official data exist on the channel width and the residual bottom thickness. The lid is completely made of acrylic and the angular corners reflect the beams of the aRGB light bar back and forth nicely, resulting in a pretty colorful, large-scale picture. Of course, this is purely a matter of taste, as always.

The backplate is part of the scope of delivery and is actually not needed for cooling the RAM modules on the back, because they stay really nice and cool, as we will see in a moment. That’s why I didn’t mount it in this case, because I also want to measure the board from behind. If you want, you can of course screw the part on and be happy about 1-2 Kelvin less board temperature at the relevant places. But it’s more optics than technical necessity. Thank God.

Here is the data sheet for the new cooler for you to skim over: