With today’s Sapphire RX 6600XT Pulse 8GB I want to introduce you to another board partner card, which follows a completely different philosophy than the model from MSI used in the launch article. There is no electric crowbar here, but a clever compromise of what you really have to spend for a similar performance and the possible savings effects in the construction to cover also the cheaper segment. Whereby the “cheap” ends at the factory gate at the latest, when greedy dealers are just waiting for the next victim fodder.

The built-in Navi23 chip of the RX 6600XT is new and we’ll take a closer look at it in a moment. In general, however, graphics cards are really a sensitive topic at the moment, so that one has to separate very strongly between technical and emotional considerations. Therefore, let’s please leave miners, scalpers and the partly already megalomaniac retail sector aside for now and dedicate ourselves purely to the technology for the time being. 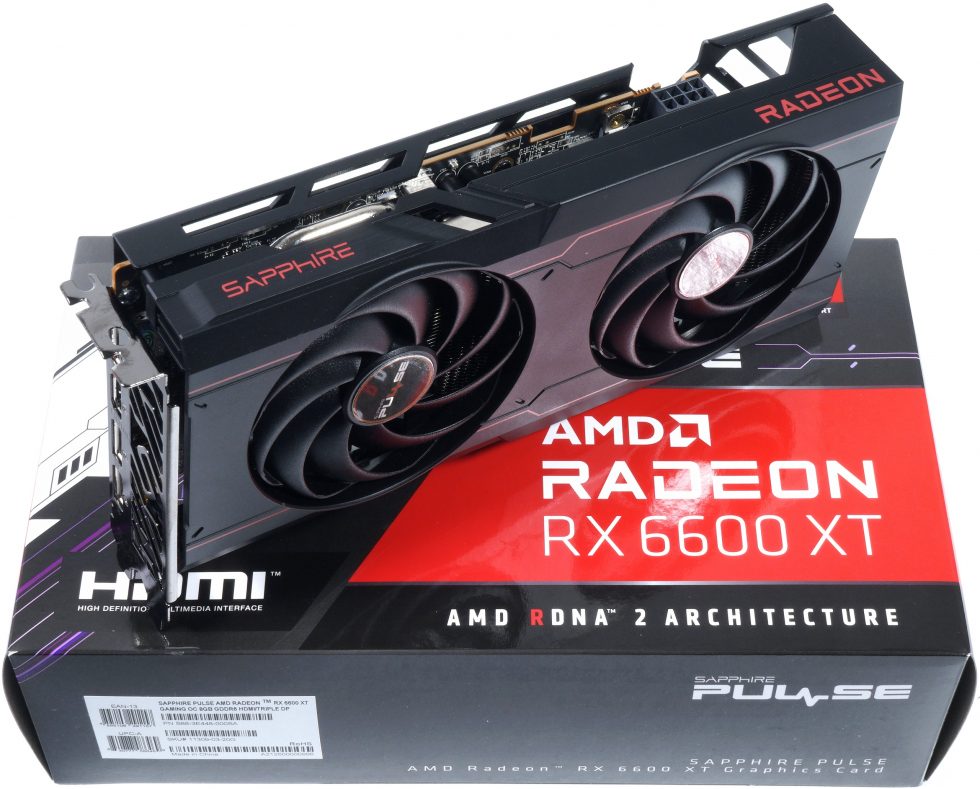 The Sapphire RX 6600XT Pulse 8GB uses the Navi 23 XT GPU, which has 32 compute units or 2048 stream processors. The card also features 32MB of Infinity Cache and 8GB of GDDR6 memory running over a 128-bit wide bus interface. The Navi 23 GPU itself measures 237 mm2 and consists of 11.06 billion transistors. However, the GPU is still not the smallest chip in the RDNA 2 family, as Navi 24 is still expected here for the absolute entry-level range. Storage speeds will be at the usual 16 Gbps, which will then give a total bandwidth of 256 GB/s. The Sapphire RX 6600XT Pulse 8GB clocks with 2382 MHz and could reach a peak of almost 2607 MHz, which looks nice on paper and is even surpassed in practice. 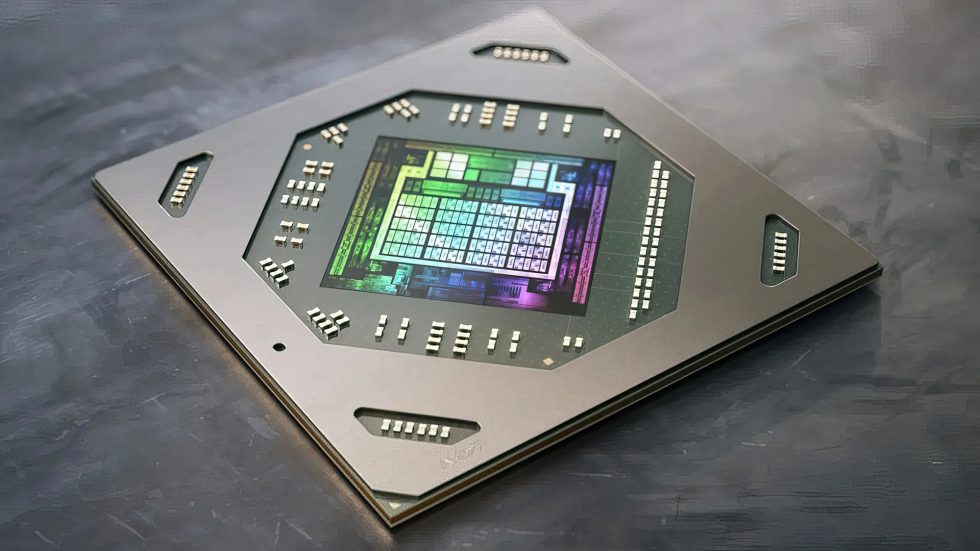 The Sapphire RX 6600XT Pulse 8GB weighs only 602 grams and turns out to be an absolute flyweight. The front is dominated by two exchangeable 8.7 cm fans (opening 9 cm), whose design we already know from the other Sapphire cards. The rest is ABS in black and red along with an unlit logo on the top. So it’s not really an excitement, but it’s not a visual aberration either. Economy de luxe, but it’ll do. 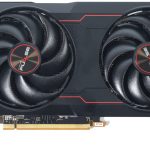 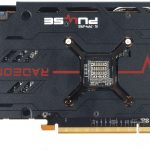 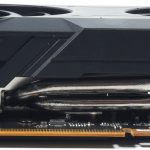 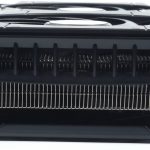 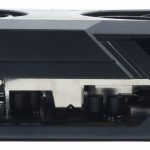 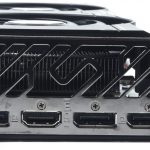 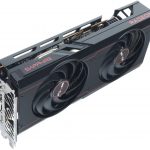 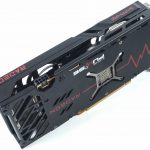 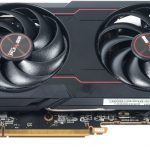 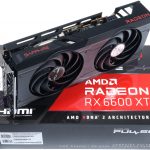 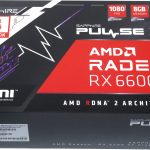 The board is already 4 cm thick without the backplate and needs another 0.4 cm for the rear planking. The cooling fins are vertical and on the top we see a single 8-pin power supply connector. The rest, however, is completely unspectacular. 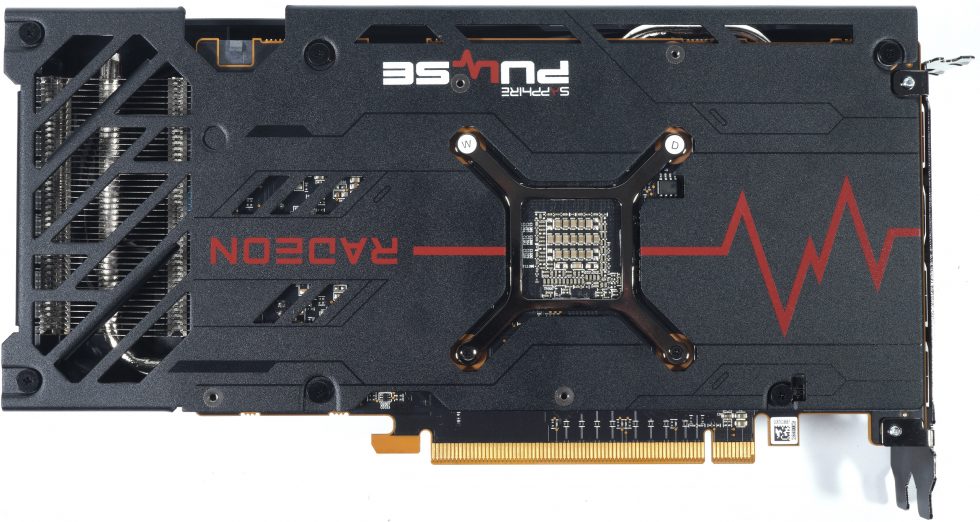 The backside of the board is covered by a backplate. the air opening also reveals that the board with its 19 cm length is quite a bit shorter than the 24 cm long card (slot bracket to card end).

The slot bracket is open, carries 1x HDMI 2.1 and three current DP connectors. The USB Type C is omitted. The whole thing is powered via an 8-pin socket. Of course, you will find out in detail what electrical power is actually consumed. 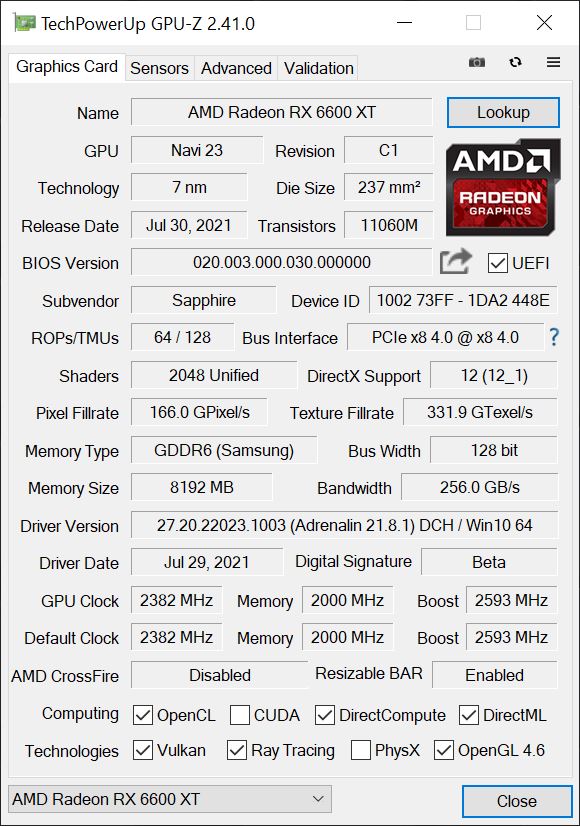