The next generation of first-person shooters – that’s how EA announced the latest addition to the Battlefield series. At the release there was a huge shitstorm of angry buyers and the reviews on the popular platforms piled up endlessly. As an editor, do you then finish writing your test, or do you get annoyed at the superfluous effort and hand the whole thing over to the digital wastepaper basket? I stayed fair for now and gave EA the chance of a few days to at least explain themselves plausibly and to improve by means of possible patches. And yet, at the current state of affairs, you’ll probably have to decide between cremation or burial at sea, because the game is unfortunately still not really complete.

To understand my frustration as a long-time lover and buyer of the series, I need to take a moment. Back when Battlefield 1942 came out, I had just bought a fresh AMD processor and a GeForce graphics card. Was that perhaps a feast for the eyes, the way the edge-smoothed palm leaves on Wake Island moved in the wind! Now came Battlefield 2042 and as luck would have it, I also had a fresh AMD processor and GeForce graphics card installed in my computer just before this release. Joyful déjà vu? Not really.

There are almost two decades between the two games, in which not only the hardware has developed massively, but also the development effort of modern games is no longer comparable to the “classics”. No wonder that there are always delays due to the extensive production. Especially in the current time, where from one day to the next half the staff of a company must be quarantined. Although Battlefield 2042 was also delayed, it was forced to forgo some features not yet implemented at release, thus unleashing an unfinished polished game on buyers. Of course, they were annoyed, because after all, prices of up to 109,99€ were called for the special editions.

Hardened by other disappointing releases like those of Anthem, Cyberpunk 2077, Horizon Zero Dawn and the like, we asked ourselves: how bad could it be? For my review, I also revisited the old games and checked out all the game modes in the new title. Because I already wrote it above – you have to be a little fair. And I’m capable of suffering now, too.

After I unlocked and downloaded the game, I wanted to start it right away, of course. But I had made my calculation without Origin, because the launcher crashed directly when starting the game. Origin no longer works. Well, unfortunately one is already somehow used to that. So reinstalled the whole lot, started it up again and (not only) gave it another go. Although the game started at some point, it only filled a good quarter of the screen. VGA in the early 1990s feeling says hello. 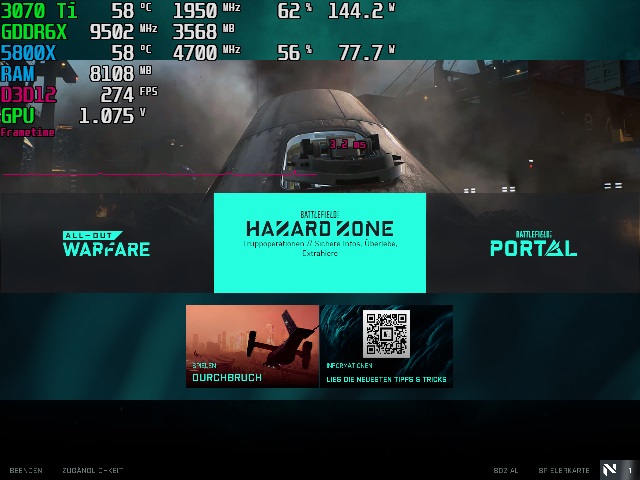 Switching to full screen mode via Alt-Enter caused the footer menu to disappear. We’re off to a good start! By the time I had clicked through all the pixel mud and finally found the settings menu, I had no desire or inspiration to actually play the game. When I finally fixed the problem, I also realized why I couldn’t make sense of all the menu items. Back then it was called “settings” (which made a lot of sense), it had a hambuger menu or a little cogwheel as an icon, and it was housewife-friendly enough to avoid any mistakes.

In Battlefield 2042, the settings menu is now called hip and modern “accessibility” and I wonder who translated that. Alexa or Siri? Or did they perhaps outsource the translation package to India or Pakistan as a tender to further maximize profits? No, we don’t want to buy a carpet, certainly not roses. Linguistic localization should not and must not puzzle, but help. This also applies to other linguistic stylistic blunders, but we prefer to scatter them over the unpurchased carpet of silence out of honest sympathy. It’s bad enough as it is.