DDR5 is known to be rarer and harder to come by than some GPUs at the moment. Therefore, the question arose for me: Does an Intel CPU of the 12th generation, codename Alder Lake, really need the new memory standard, or is the performance with DDR4 on a similar level? Alder Lake now also uses two separate memory controllers (IMCs) for DDR4, one for each memory channel, where the 11th generation only used one in total. For this I again recommend our interview with Kingston, where exactly these fine differences are explained in detail.

We could already prove that Alder Lake’s memory interface is used more efficiently in benchmarks in a previous article. But now I was also interested in the effects of this on single- or dual-rank topologies. Since I am one of the lucky few with several DDR5 kits, I just tested this and of course I don’t want to withhold the results from you. 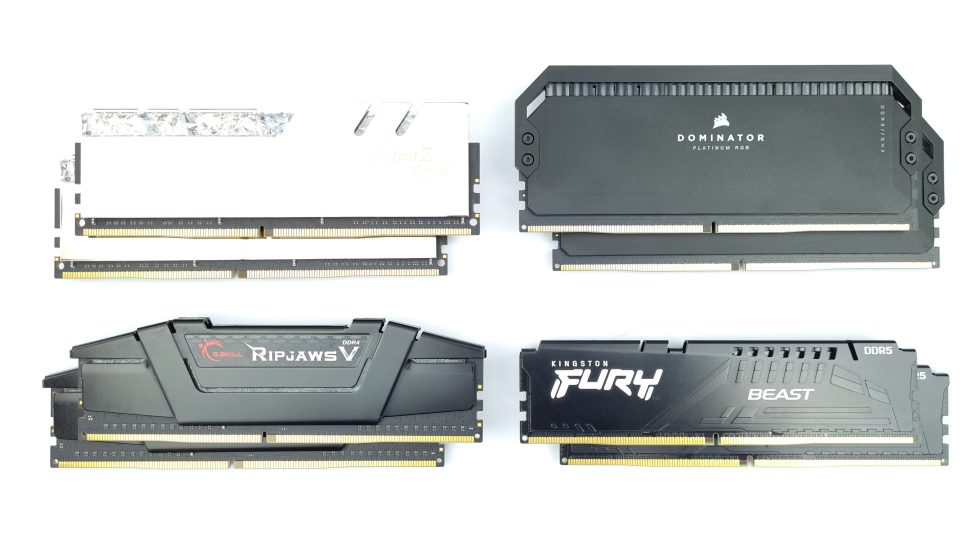 A 4-DIMM motherboard from MSI serves as the base in each case, the Z690 Carbon WIFI for DDR5 and the Pro Z690-A DDR4. When it came to RAM settings, I was looking for a good compromise between performance and affordability. Because even if you can achieve clock speeds of up to 4400 Mbps with Alder Lake in the Gear 1, assuming appropriate RAM and BIOS optimizations, that’s probably out of reach for most users. Accordingly, DDR4-4000 is operated with timings 15-15-15-30 at 1.5 V, which also works without problems in the dual-rank. The exact settings including subtimings and stability test I have here as a screenshot:

With DDR5, I aimed for a similar compromise, although much higher clock speeds are possible here due to the inevitable Gear 2, depending on the memory IC. While Micron 16 Gbit RevA can be clocked up to a maximum of 5600 Mbps, the Hynix 16 Gbit “M-Die”, which I have not yet been able to test myself, manages close to 7000 Mbps and Samsung’s 16 Gbit B-Die is somewhere in between. Since my configuration is supposed to work in dual-rank mode, I finally settled on DDR5-5600 36-36-36-72 at 1.3V. For this purpose, 2 kits with a total of 4 single-rank modules are used, which are divided between the two channels and effectively operated in dual-rank mode. The details about subtimings and voltages are again available as screenshots:

After DDR4 and DDR5 configs are set, only the CPU remains. An i9-12900K is used here again, with the “efficiency” cores disabled, the performance cores set to 5.1 GHz, and the cache set to 4.6 GHz, both staticly. Also these settings are not the absolute maximum of what can be achieved on the Alder Lake platform with good cooling and luck in the silicon lottery, but are relatively straightforward to achieve for most CPUs and users. As always, a complete listing of the hardware and software used is still available as a table:

For better clarity, the following abbreviations are used in the diagrams:

Why no REAL workstation benchmarks? l want to se what DDR5 6000MT does to Solidworks, if any

Intel Core i5-12400 Workstation Review – How does real work succeed without glued-on E-cores? | Part 2
Upcoming game changer in the mid-range? Intel Core i5-12400 Review and Gaming Benchmarks – more efficient without E-Cores and with DDR4 instead