We’ve had it so many times: NVIDIA and AMD workstation graphics cards can’t (and shouldn’t) be overclocked. And yet, by chance, I found a way to do just that with the RTX A5000 for once. After the first test, I now go one better and even cool the card with waterblock and chiller to really expose all available boost steps. And yes, there’s really something going on, because the beat is skyrocketing! The performance of the card with 230 Watt TBP is far above what you get from the factory! 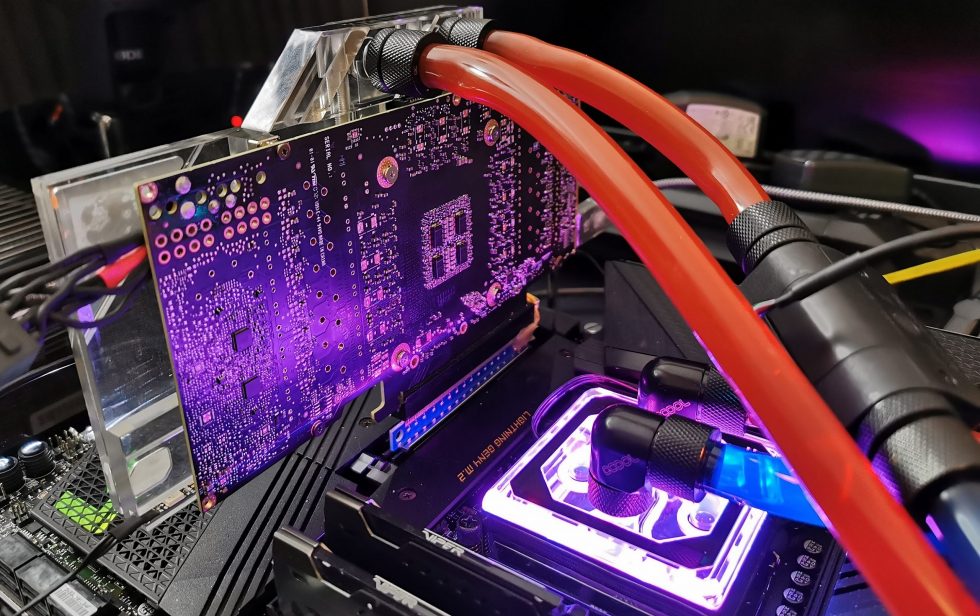 The fact that you can’t (and shouldn’t) overclock the workstation graphics cards of both manufacturers has a solid reason: stability. The productive area is not a playground for curious gamers or hardware enthusiasts who want to show what works. Overclocking ECC-RAM is almost decadent and I also ask to see today’s article as a pure feasibility study proving that you could do other things with this hardware than just work through Jensen’s and Lisa’s specification corset.

So let’s not take today’s article too seriously, because I personally wouldn’t want to affect the stability of my workstation with this, or risk anything going wrong, even if it’s a simulation. But I had already written it: we are doing a little feasibility study today. And if I am to be honest, with a little modesty when overclocking and the use of brain and reason, it is quite possible to save expensive time when working with the settings used.

First article: NVIDIA RTX A5000 and RTX A6000 properly overclocked! Workstation overclocking as a benefit or pure oversight?

In principle, the board of the RTX A5000 corresponds in terms of keep-out areas to the reference board PG132, which NVIDIA has provided for the GeForce RTX 3080. Thus, all water blocks for the GeForce RTX 3080 should actually fit in the reference design. However, you have to pay attention to smaller details, like the connector being very close to the RAM with its bare contacts. For safety reasons, I taped them off with thin insulating bath, because better safe than sorry. No one really needs a short.

Afterwards I covered the necessary areas with suitable, very good heat conducting pads (Alphacool Apex with 11 W/m*K), applied the heat conducting paste and screwed everything together again with a final and very thorough visual inspection. The thermal contacts fit, the rest is safe. We still know the Alphacool GPX-N from the previous tests with the GeForce RTX 3080. 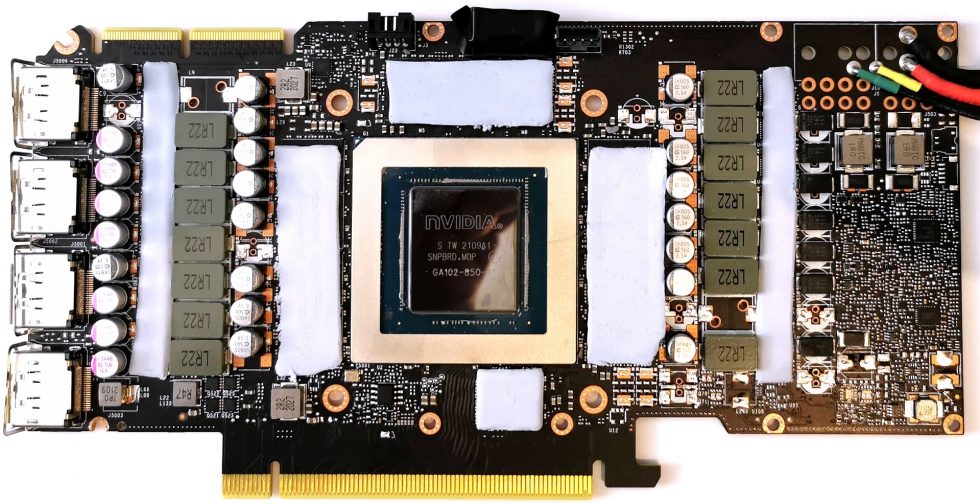 So there is nothing standing in the way of a new overclocking test. and one can be curious which new possibilities will open up. If you only use the card like this, you can enjoy up to 150 MHz more boost clock even without an overclocking tool. so just as much as you would have gotten with the manual overclocking and the afterburner including 100% fan speed. The only thing is that without OC, you would certainly be more likely to meet the stability requirements of a workstation graphics card and thus get an indirect and “legal” overclock.

We know it, usually the relevant overclocking tools such as the MSI Afterburner bring us a clear rejection. Either the relevant input fields or sliders are grayed out, or the changes are simply not applied, but reset to the default value. While it was at least possible to increase TGP and TDC in the MorePowerTool of the current Radeon Pro, nothing was possible with NVIDIA’s Quadro cards until now.

I was able to add quite a bit of clock with the Afterburner (i.e. shift the offset in general) and in the load tests I was amazed at the boost frequencies that were suddenly possible when the highest boost step was applied! With an edge temperature of the GPU of about 28 °C and GDDR6 temperatures of about 42 °C the card suddenly ran with 300 MHz more, as if it wanted to collect new world records now: 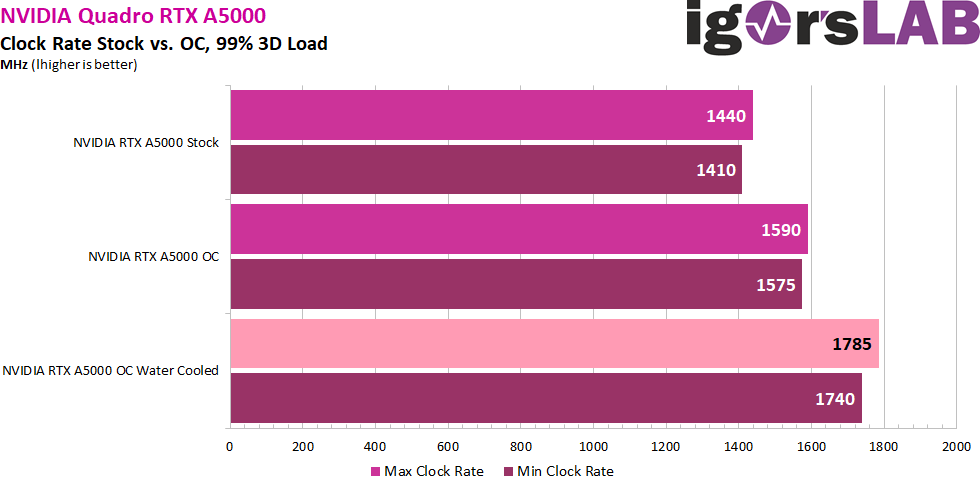 Well then? The question arises, what of the set offset really arrives at the clock in practice. When it comes to memory, yes, it’s clear, though I didn’t overdo it much. On the one hand you are happy about ECC and on the other hand you question it again by exaggerated settings. You don’t do that. But when it came to the GPU clock, I was brave. Incidentally, the cards can also be made more economical, i.e. quieter. Right down to the undervolt, which would have been a nice gimmick as well.