The NVIDIA RTX 3090 Ti FE was unfortunately quite rare as a sample at the launch and only made it into my well-stocked archive much later. But postponed is not canceled and since I didn’t see any sense in testing an even higher clocked (and energetically much more inflated) board partner card in my workstation at that time, exactly this part has been open for quite some time. Since there have been some similar reviews with more or less scarce content lately, I simply prepared a GeForce showdown for today before the next generation is sent into the race slice by slice starting in the fall. 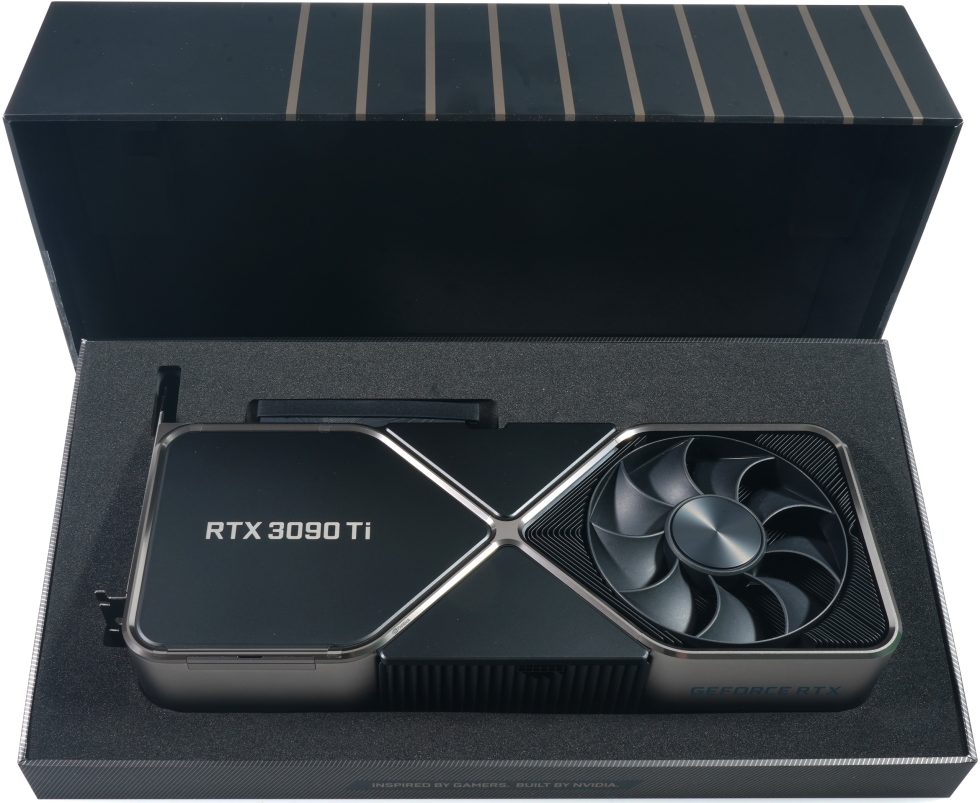 And so, a total of 11 cards meet today, whereby the duel of the GeForce RTX 3090 Ti FE against the other full chip in the form of the RTX A6000 should be particularly interesting. And because I kept getting letters asking me to please do the same with the 300-watt cap for the studio and workstation range, it ended up being a joint effort. I don’t have to write much more about the RTX 3090 Ti FE, as I had already gone through all this information in the launch article.

The test card was provided to me by NVIDIA some time ago to test it, and they were of course not negative about today’s project, even though they probably saw the use of the RTX A6000 as a counterpart with a teary eye. Thus, there was no obligation to publish today’s article, however, I face the challenge of this test more than just voluntarily, because curiosity gives wings, as we all know, and I just put several things together in one article. However, in order to remain objective here, I deliberately did without the assets from NVIDIA’s reviewer guides, but used my own settings and workloads or proven standard benchmarks from the industry.

If you look at the current prices, the current top model has dropped quite a bit. With street prices of a good 1400 to just under 1500 Euros, some of the not so highly overclocked board partner cards are still no bargains, but are meanwhile already somewhat within the bounds of affordability again. In contrast to the RTX A6000, which of course serves a completely different clientele as a certified workstation card. The boundaries are becoming increasingly blurred in the studio area as well.

To the savings variant as 12. Setting I should write something briefly after all. Once again, I’ve narrowed down the power limit of the Founders Edition, as well as adjusting the VF curve. I used the curve of the NVIDIA RTX A6000 from today’s review as a blueprint, which is also slowed down with a power limit of 300 watts and has the same, uncut GA102. The fact that I took the trouble to test the consumer card and the RTX A6000 is also due to the fact that the RTX A6000 only has the significantly slower GDDR6 RAM.

Depending on the game, this costs between 3 and about 10% performance, but the memory expansion of 48 GB is twice as big. And since today it’s mostly about studio applications, this comparison is also quite interesting. By the way, the GeForce RTX 3090 Ti FE also has the more powerful cooler, so the disadvantage of the slightly higher RAM power consumption should be compensated by lower temperatures (and thus higher boost rates).

By the way, the frequency setting was easier this time, because the chip was not quite as bitchy as the one on the MSI card. The curve could be adopted 1:1 this time, which saved a lot of time.

The benchmark system in the lab and the editorial office is known and redundant. I’m going with PCIe 4.0, the appropriate X570 motherboard in the form of an MSI MEG X570 Godlike, and a select Ryzen 9 5950 X. Add to that fast RAM in workstation configuration on 4 banks, and several fast NVMe SSDs. For direct logging during all games and applications, I use both NVIDIA’s PCAT and my own shunt-based measurement setup that can monitor all lines to the graphics card and motherboard (10-channels), which increases the convenience immensely. I have also summarized the individual components of the test system in a table: