You probably remember Intel’s DG1 and the somewhat unsuccessful attempts to get the dedicated DG1 to work at all on the original evaluation system. To those who accused us of negligence and outdated drivers at the time, let me wink and confirm: even with the latest sofware snippets, nothing still moves. Because whether this system was ever able to present games really executable by itself is still an open question. The combination as DG1 from Asus with a special board might be able to do that better in the meantime, but much more than office should hardly be possible there, too. Well, and then came DG2.

Reading tip: Set with X(e) – DG1 including Intel Iris Xe MAX Graphics in an exclusive teardown and with massive driver problems in benchmarks

Intel is currently planning DG2 in the notebook as well as in the desktop area, whereby the latter is left to the board partners and is obviously not active itself. I know from employees from Asus and MSI that Intel has made representations to some of the big names in the industry. But what exactly was agreed (or not) there is still a well-kept secret The diagram below is a bit older and shows the connection to Tiger Lake H. 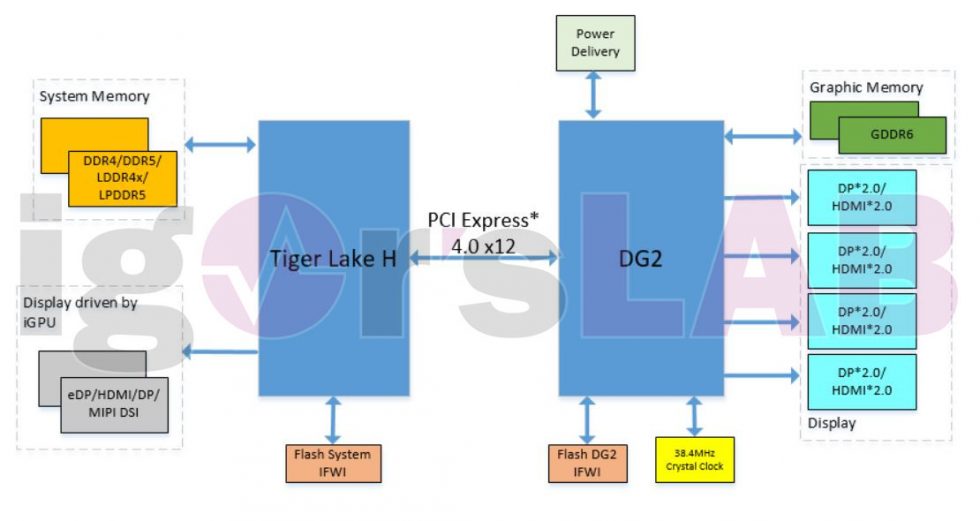 In the meantime, however, Intel is planning to use Alder Lake-P in the notebook sector, i.e. CPUs as 1-chip BGA with a TDP of 15 to 45 watts. The production of DG2 for the mobile sector is supposed to start already in calendar weeks 43 to 50 with the two smaller SKUs (4 and 5), if the current plans go, so that one is probably aiming at still very close to the Christmas business. The major SKUs (1 to 3) should then follow between week 50 in 2021 and week 10 in 2022.

Whether and especially when the three big models will also find their way to the new board partners as desktop GPUs is still uncertain, because the focus is clearly on the mobile area of notebooks according to the sources. The following table is a first indication, but not yet complete. I see a need for clarification especially with the TDP ratings. What you state with the maximum 100 watts should refer to the chip alone. With memory, you’d quickly be in the 125+ watt range – a lot of cooling work for a notebook. The dedicated cards are not mentioned in the current data in this regard, but you should be able to expect well over 200 watts for the entire card.

The following picture now shows a layout draft from the design kit for the notebooks with 4 or 6 memory modules, which could indicate the expansion with 4 (SKU4 and SKU5) as well as 8 or 12 GB (SKU2 and SKU 3).

The chip itself is also still a little unicorn, but at least the socket BGA2660 could be “procured” as a graphic. Interesting all the same, if you look at the number and arrangement of the pins. I don’t have any further details for now, but that certainly doesn’t mean there aren’t any yet. So some more content needs to be gathered here. 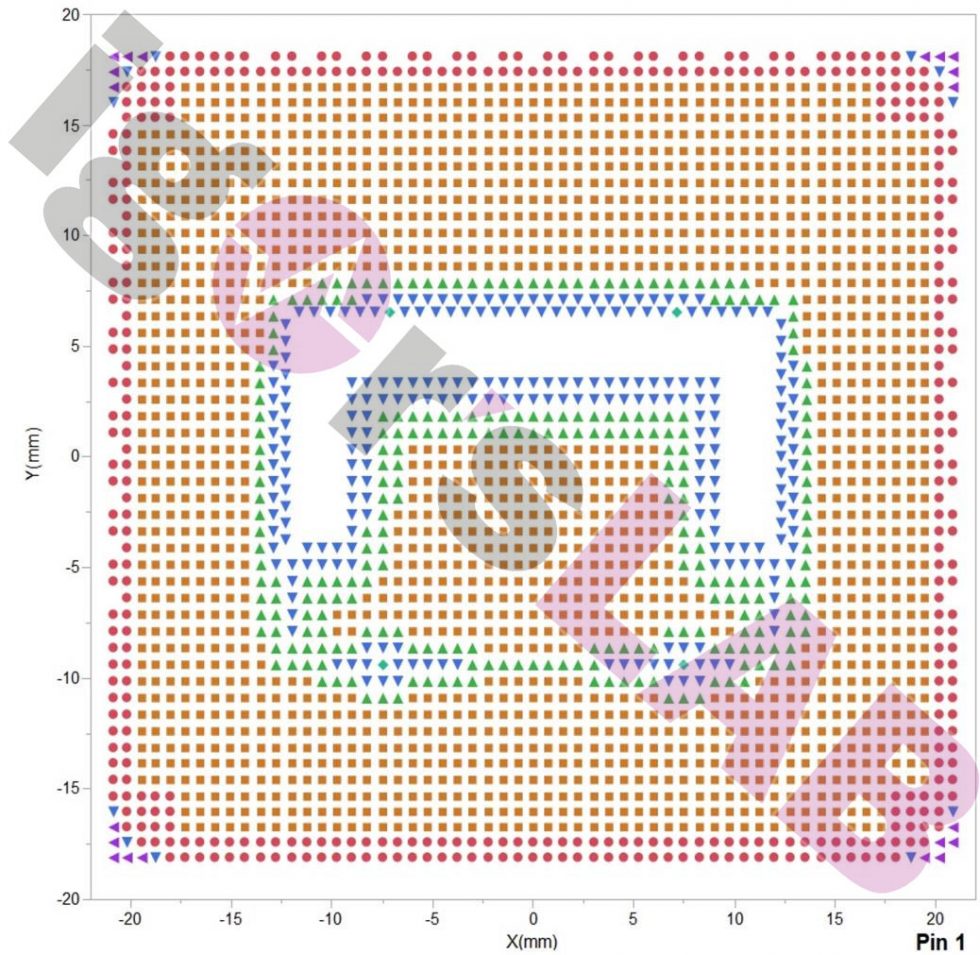 Which brings us to the software and drivers. I had already written several times about who has left the team since the Odyssey event at Computex 2019, from PR to the desktop control center team for the dedicated cards. There were quite a few of them, and even die-hard Intelians have (re)ended up at AMD in the meantime. Now they are clearly looking for replacements and again for new people. So Pete Brubaker had recently tweeted that Intel is now looking for a Senior Game Developer Relations Engineer. The fact that Intel is now actively recruiting people who also have experience in working with game developers obviously proves that Intel does see new opportunities in the booming gaming market for the DG2 cards. Where and when this “Odyssey” will end for the time being, however, is still more than open. Especially as a dedicated desktop card. 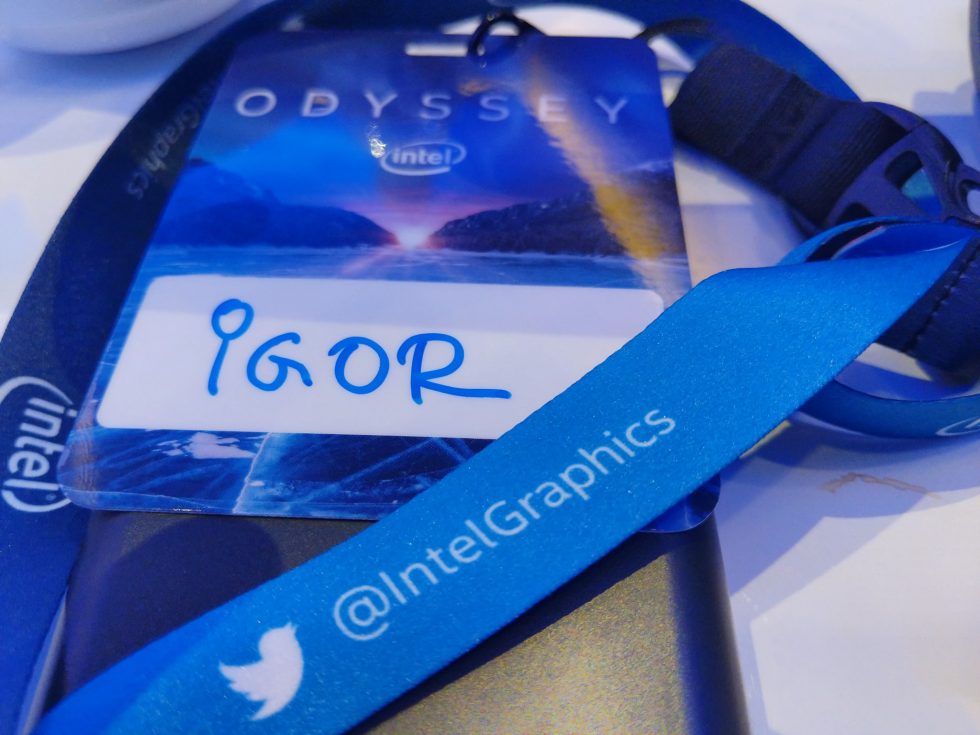 Is AMD’s FidelityFX Super Resolution coming soon in June as a real DLSS competitor?
Exclusive info about Intel’s Alder Lake-S – Will the Intel Core-1800 be a threat to AMD?