Personally, I was very excited about these two mechanical keyboards from Cooler Master, as I have been using the Cooler Master Masterkeys Pro S for years and am very satisfied with them. The two models not only have different layouts and sizes, but also very different features. The larger one is the SK630, it has like the masterkeys Pro S a conventional layout only without the number block, which is also called tenkey-less (TKL). The smaller SK621 has shrunk in both height and width, and belongs to the class of compact keyboards. 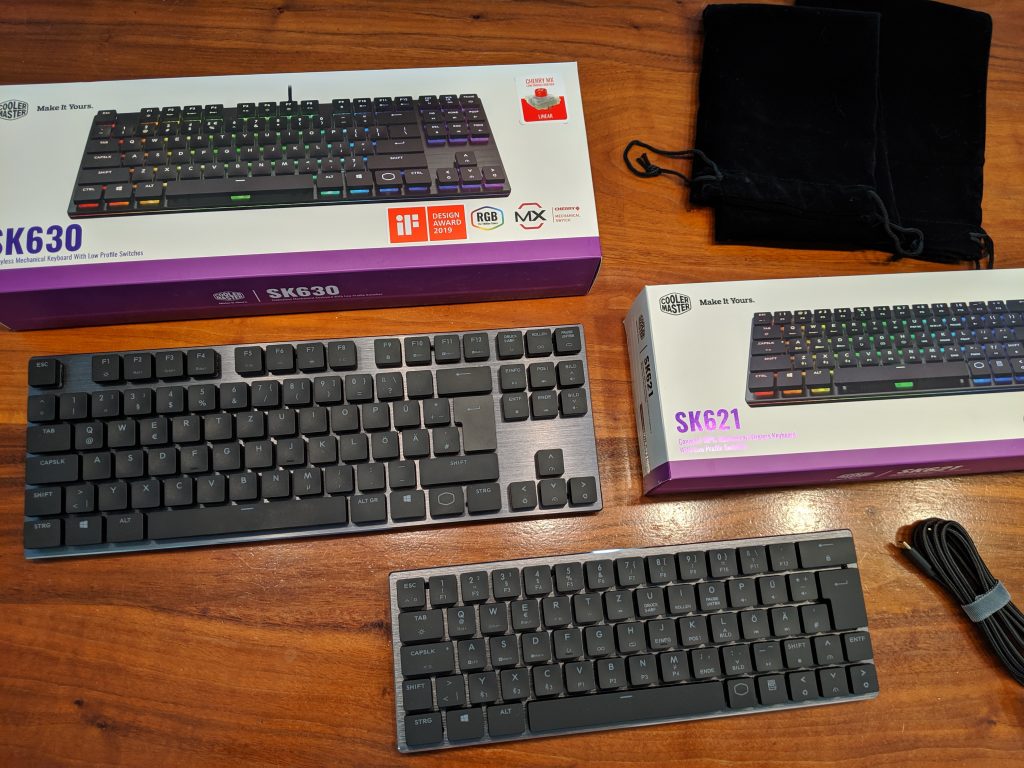 With these keyboards, the F keys are combined with the number keys and the arrow keys are integrated into the layout to make the keyboard smaller without changing the size of each key. However, the SK621 also has a feature that sets it apart from the SK630: it can be connected to any compatible device not only via USB-C, such as the SK630, but also via Bluetooth. They are very similar keyboards but in my opinion they are created for two completely different purposes. The SK630 is designed for stationary use at a desk, while the SK621 is also designed for use on the go due to its size and wireless functionality. 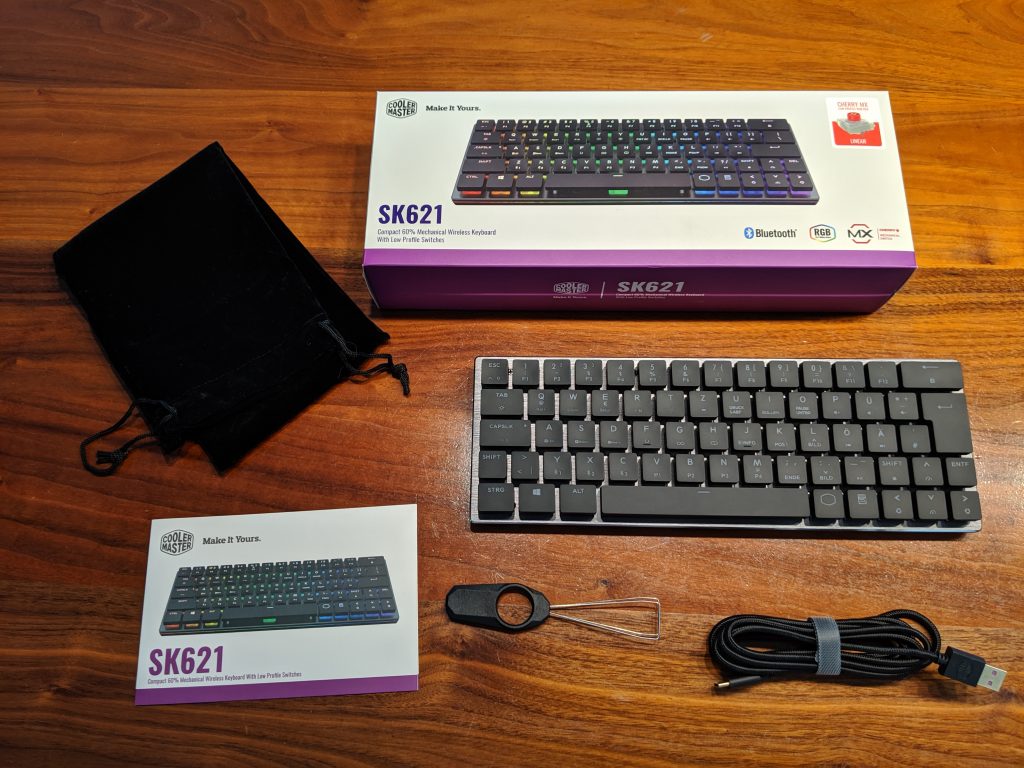 Included are the keyboard, a 1.8m USB cable, a fabric bag for transport, a tool to remove the keys and a quick guide. 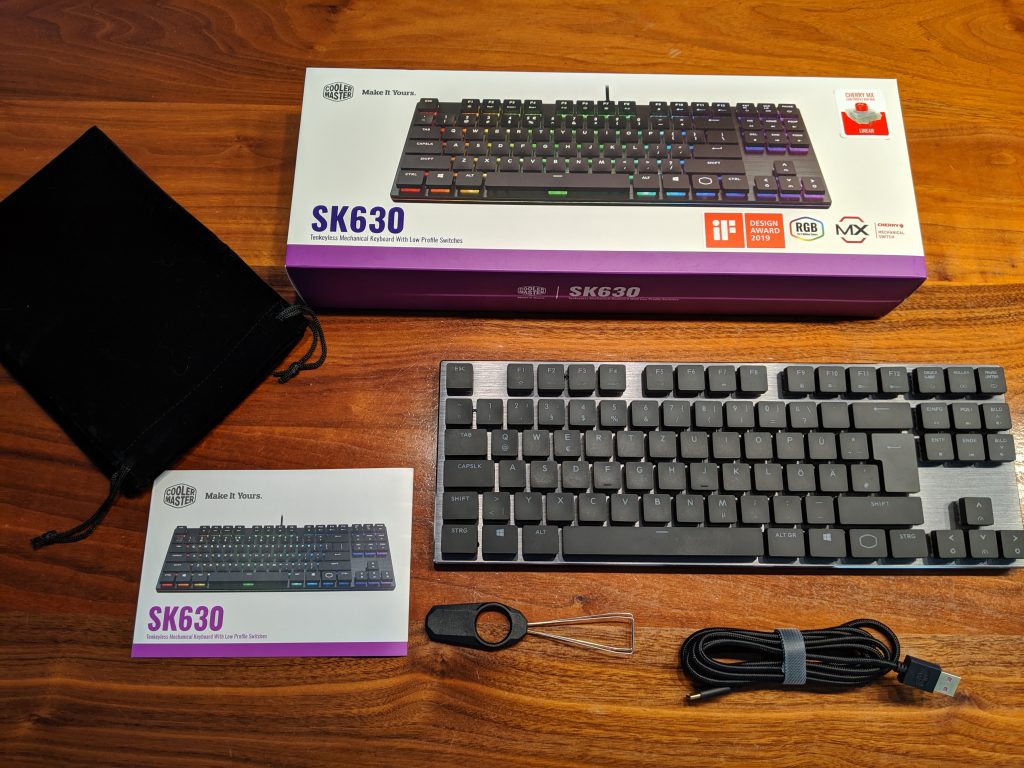 Visually, both keyboards are a real eye-catcher. The top of the case is made of brushed aluminum, the underside is made of matte plastic and at the back there is a simple USB-C port. The flat buttons with the RGB lighting look very modern and of high quality, with the aluminium under the buttons creating a kind of underglow effect and highlighting the lighting. The lighting of each button can be controlled individually, which allows a large degree of personalization. In addition, there is an external LED ring that stretches around the entire keyboard and draws a soft contour around the device in the dark. I also like the fact that the labeling of the buttons is simple and modern, which fits perfectly with the rest of the aesthetics. 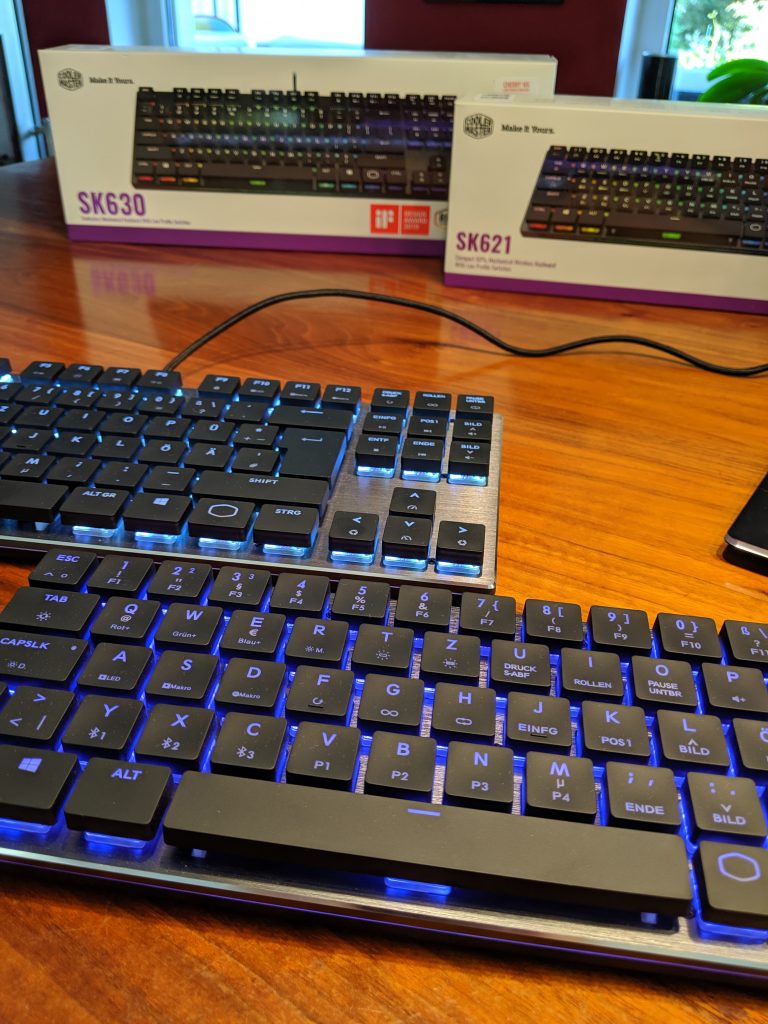 Overall, I find both keyboards visually very appealing, but one thing bothers me a little; the SK series is marketed as Low Profile. However, if I put the keyboards next to a normal Mechanical Keyboard, they are not as flat as you would expect from a Low Profile keyboard. This is due on the one hand to the height of the case, but on the other hand to the height of the keys, which are quite high for a low profile keyboard. Nevertheless, for me, both keyboards are visually very appealing. 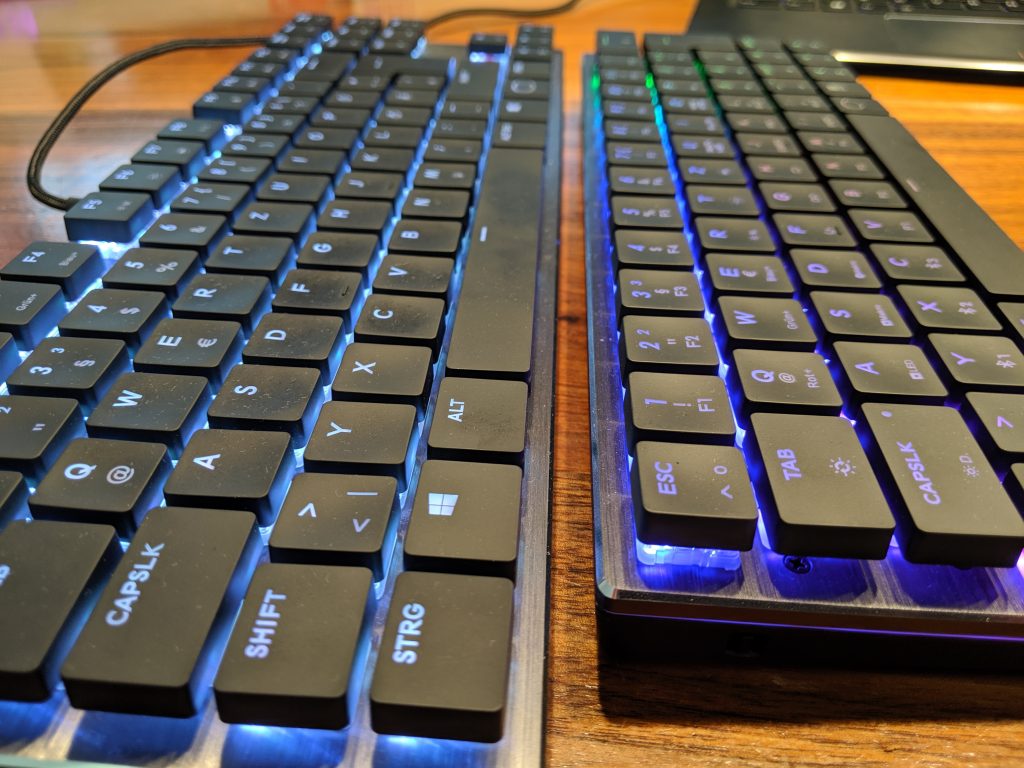 The feel, and thus the type and quality of operation, is my only and biggest problem with both models of this keyboard. This has to do with the flat keycaps, which are very nice but need to get used to. Yes, they look very good – but they make it very difficult for me to type. I can easily write blind on any other keyboard. In doing so, I orient myself to the curvature of the individual keys. At this curvature I can determine the exact position of my finger on the corresponding button and thus find the next button. Here, however, I am confronted with the problem of SK keyboards, because their keys are almost completely flat, which completely denies me this orientation possibility. I can't write keyboards on either SK without looking down again and again. I've heard from other users that with enough practice this is possible, but even after several weeks of regular use, I can't write without any errors without constantly turning my gaze down. 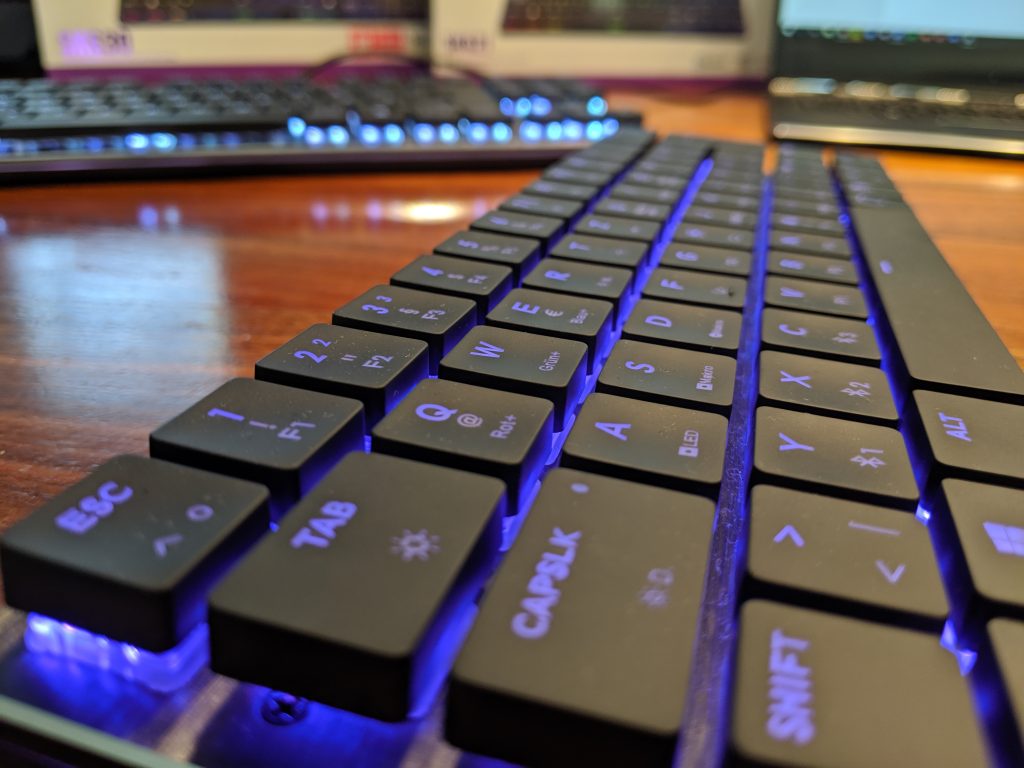 In addition, it happens to me from time to time that I press two adjacent buttons at once. This is due to the particularly tight distance between the individual keys. For me, this combination of the flat buttons and the narrow gaps between them ruins the user experience. 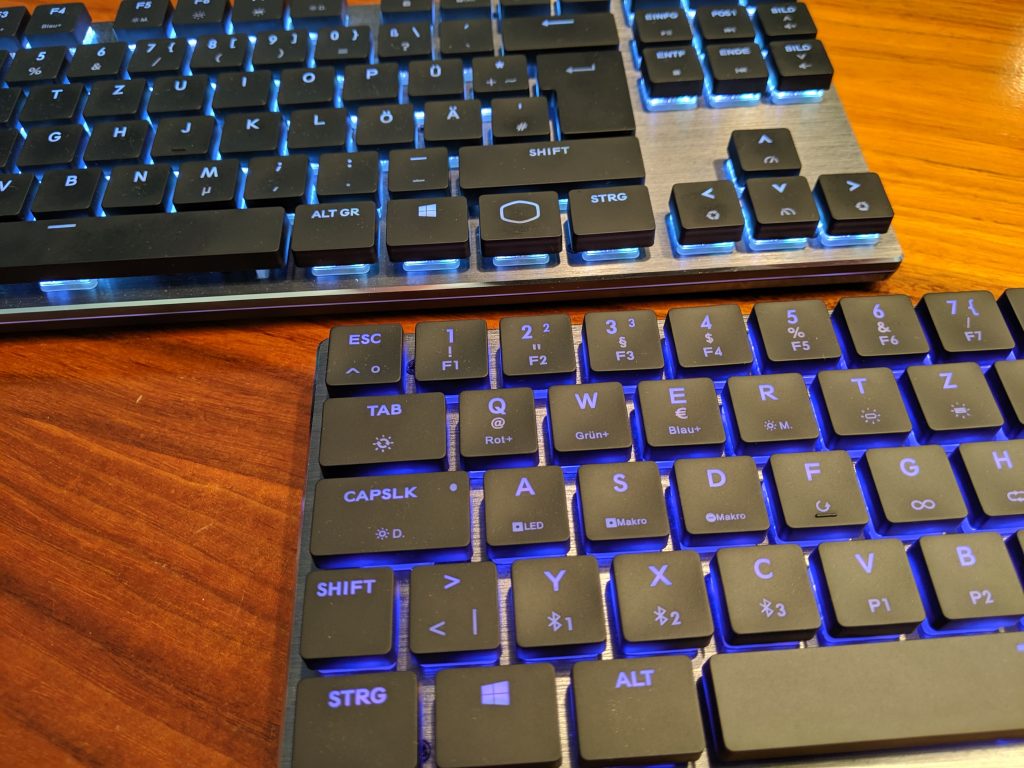 It may be that other users have fewer or no problems, especially if you're used to writing on laptop keyboards. But for me, the key design is one reason why I will stick to my old mechanical keyboard. 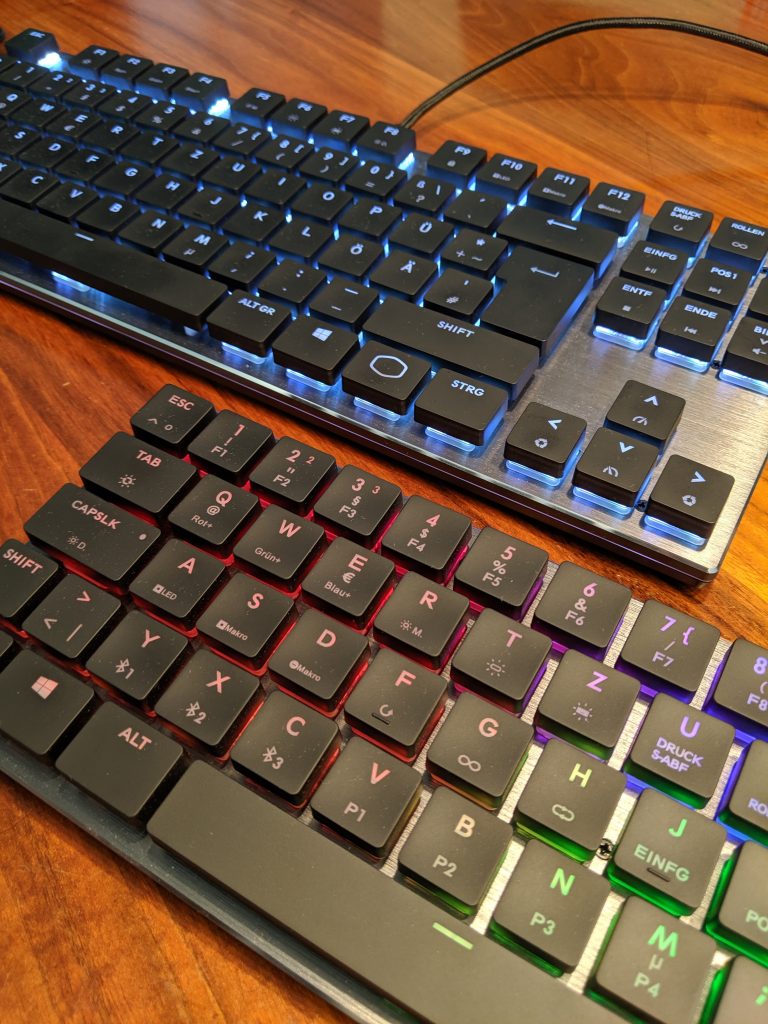 The built-in switches are Cherry MX Red Low Profile Switches, the 'Red' stands for the switch to switch when pressed without changing resistance and 'Low Profile' means that they have a flatter design than the normal switches. Personally, I prefer switches with tactile feedback when pressing, such as the Cherry MX Brown or Blue versions. But the Red Switches were also able to convince me. I was also skeptical that the low profile variants could compete with the normal switches. In fact, I couldn't see any difference in the writing feeling between normal MX Red and the low profile switches, which surprised me positively. The only difference, of course, is that the low profile switches installed here have a slightly shorter travel distance (distance to the stop). In general, Cherry switches are among the best on the market – so you get the usual quality. 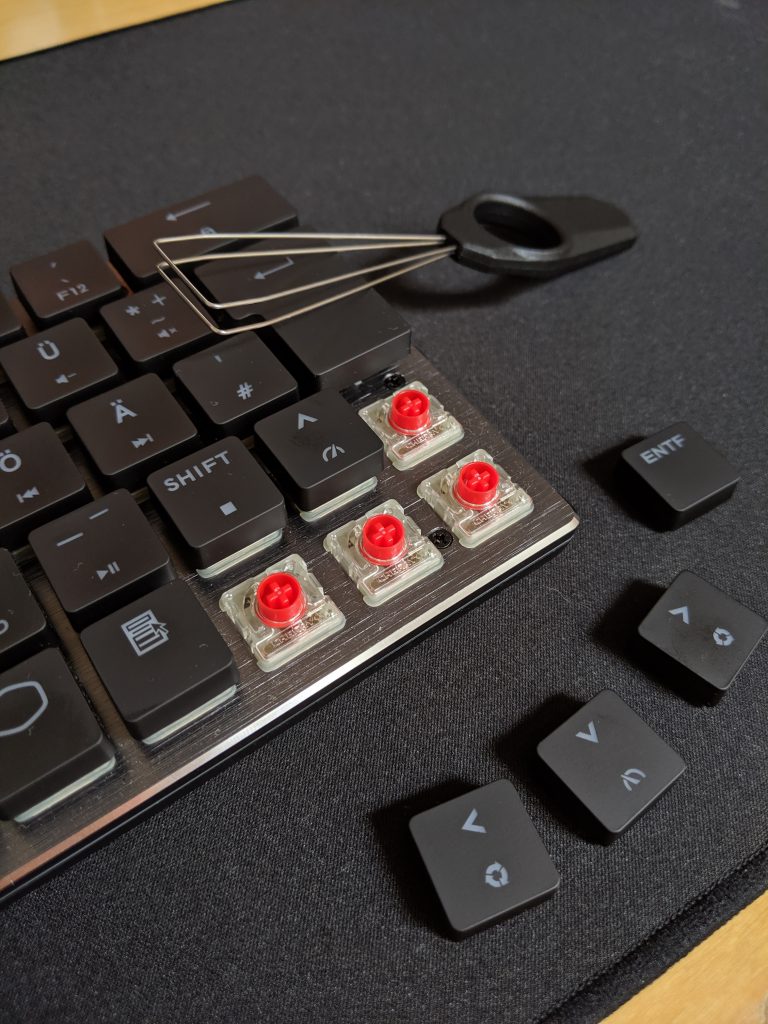 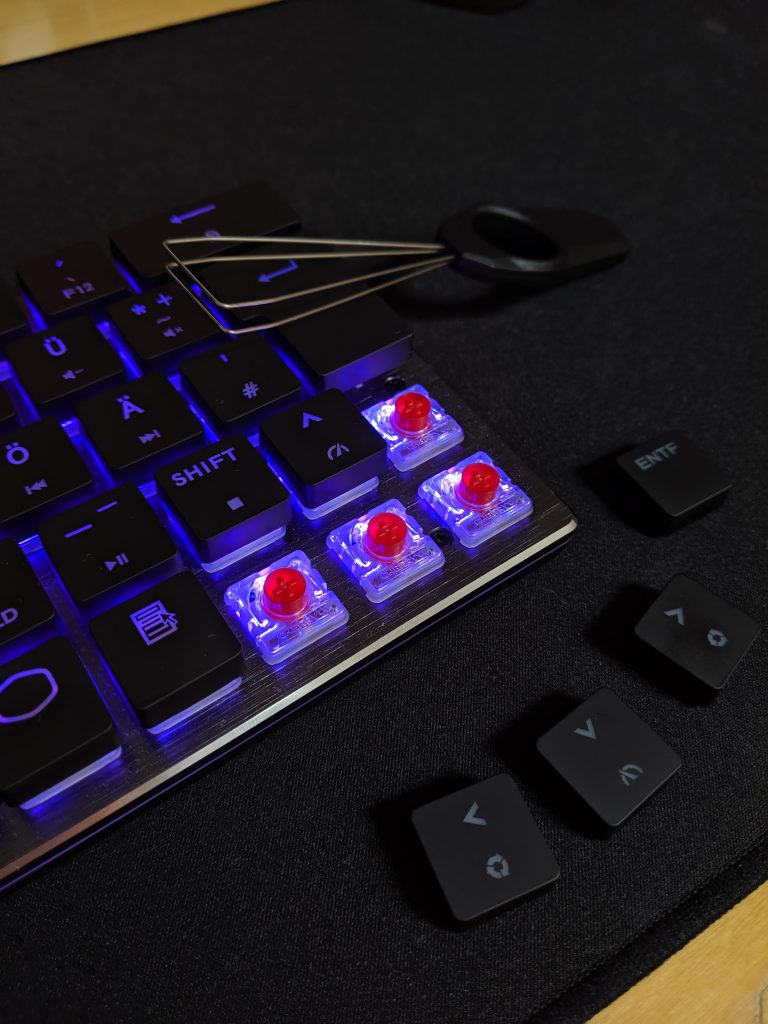 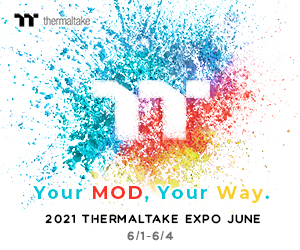