I have been following the trend of extremely lightweight mice for some time, so I was very curious as Cooler Master announced the MM710 a few months ago. It is a direct competitor to the Finalmouse Ultralight 2 and the Glorious Model 0. The idea behind these mice is to build them as easily as possible, which improves precision and ergonomics. When Finalmouse launched the first Ninja Air58, demand was so great that the price soared, making Lightweight mice simply out of reach for most of us. Today, in addition to Finalmouse, there are two other manufacturers that are priced in a more realistic range, and the latest is Cooler Master. The MM710 will cost 50€ at release and is therefore offered at a very reasonable price, for a high-end gaming mouse. 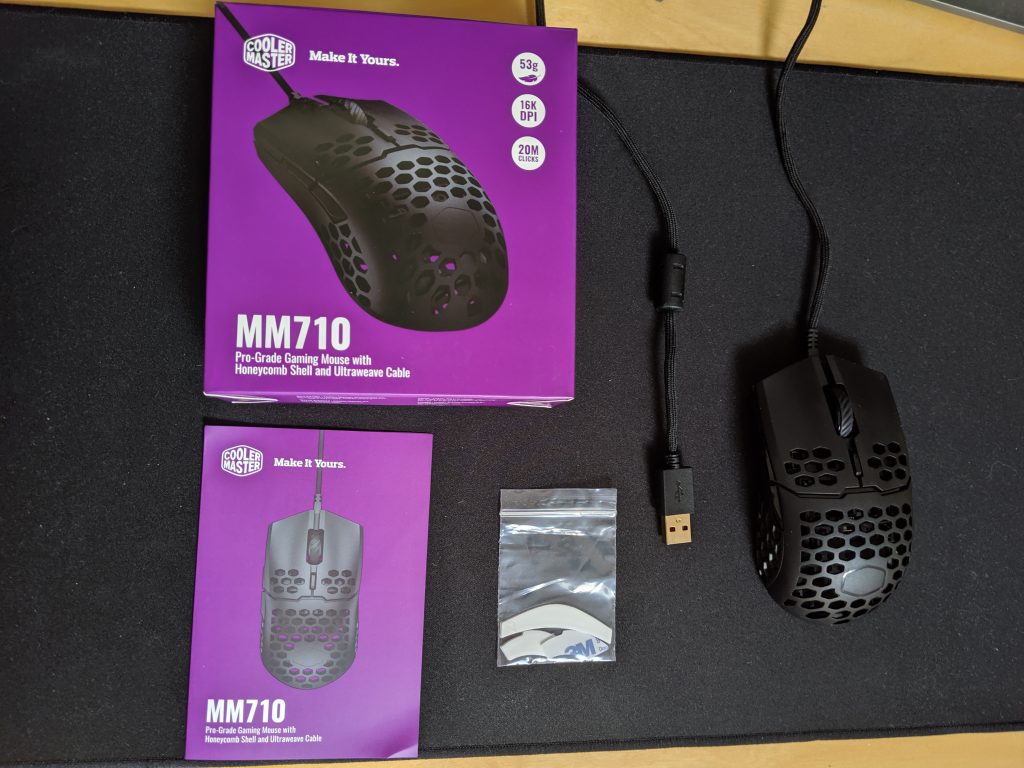 The packaging is extremely small and minimalistic, which is very much in the spirit of this mouse. In it you will find the mouse, a set of spare sliding feet and a quick guide.

Optics
The MM710 is available in four versions, the colours Weis and Black as well as matt and glossy versions. I have the matt black version here and I have to say that I like the minimalist design very much. The mouse has no lighting and only stands out due to the unusual holes in its housing. In addition, it does not have a illuminating logo, but only an etched octagon, which represents the outline of the Cooler Master logo. But even the logo fits perfectly into the design, as the holes in the mouse have the same shape. Visually, the MM710 is not an eye-catcher, but it is not its purpose either. It is beautiful without attracting attention. 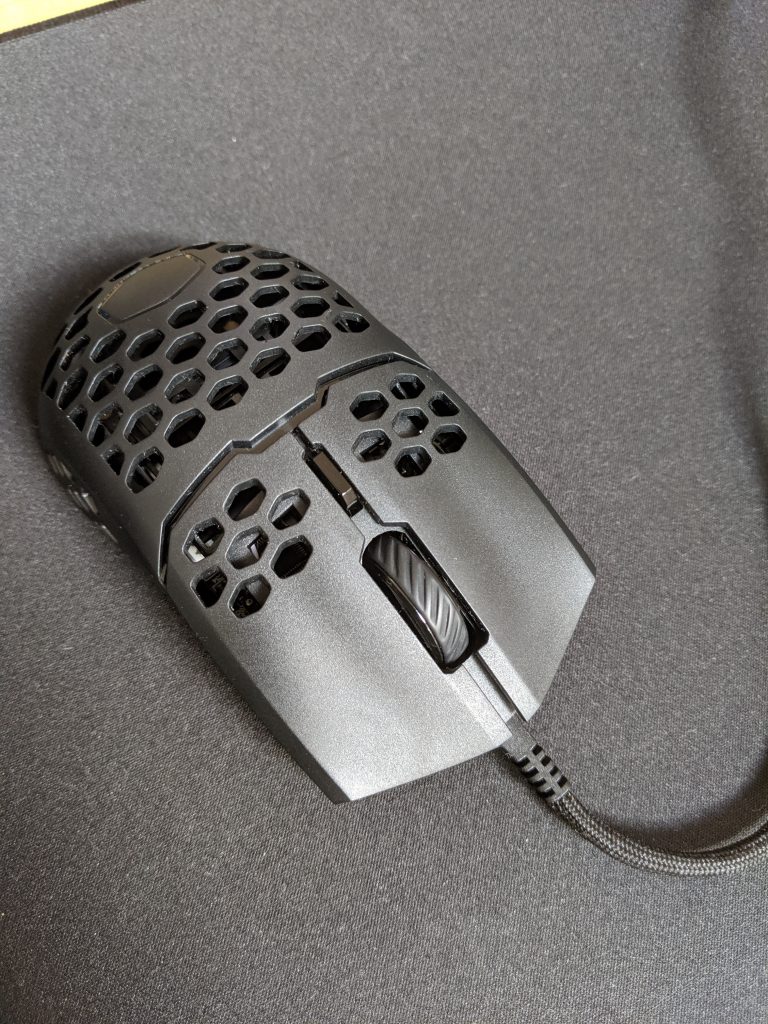 Feel
This is where the low weight of 53 grams comes into play and in my opinion the MM710 has kept all the promises that the marketing department made before the market launch. The light weight in combination with the low-friction mouse feet as well as the extremely light and flexible cable make the mouse an extremely smooth rodent. Both when playing and working. I can move the mouse faster and more precisely than I'm used to from all my previous mice. I was particularly surprised by the cable, because before the test I was unaware that a cable could make such a difference. The mouse actually feels like a wireless mouse, because there is simply no resusretriev. 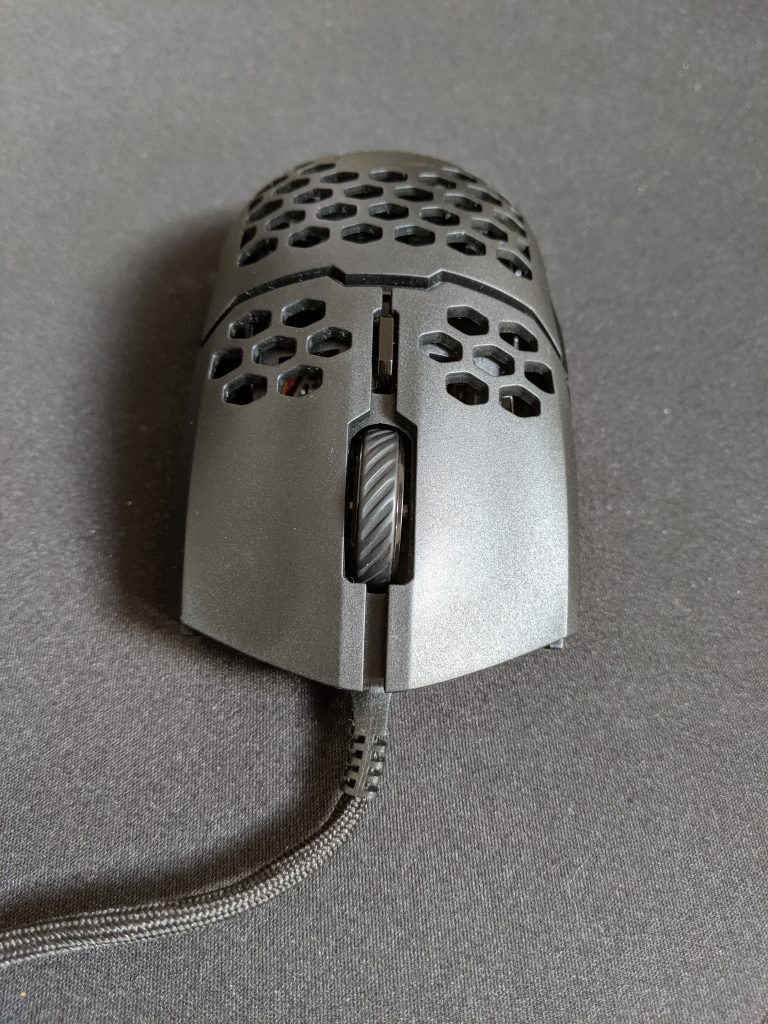 What struck me during longer sessions was that even after several hours of use, my hand became less tired and I didn't feel any discomfort with my wrists, which is always the first sign of fatigue for me. This is to be attributed to the low weight and lightness of the movements. 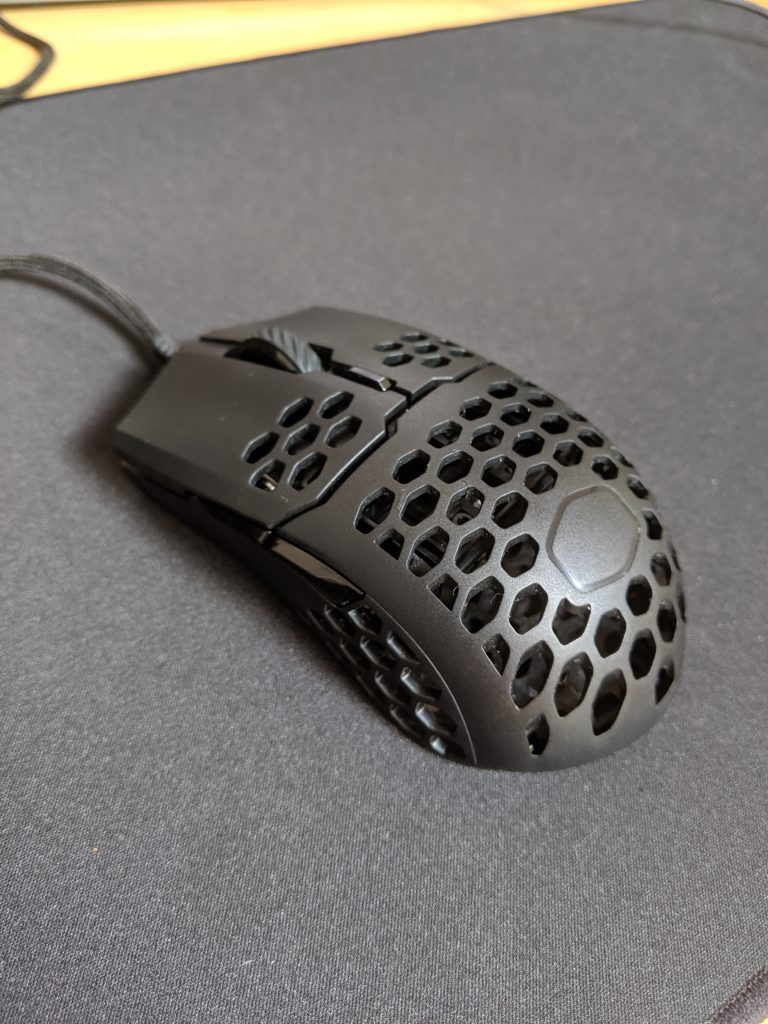 The shape of the mouse was a bit unusual for me at first, however, because the climax on the back of the mouse is relatively far behind. But after a short time I got to cope with the curvature. I think a flatter mouse back would be more optimal for my grip technique, but the shape is definitely not unpleasant. 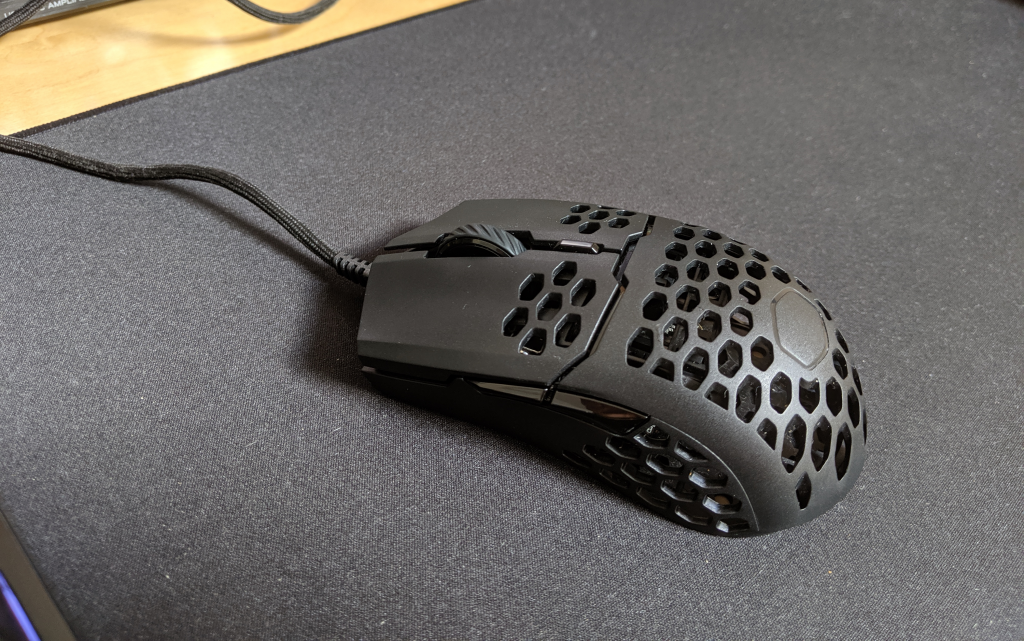 Build-Quality
The first batch that Cooler Master sent to testers in advance had several reports of problems with wobbly mouse buttons and rattling mouse wheels. The MM710 I received was from the second batch and is more like what we can expect as a final product. I couldn't find shaky mouse buttons or a rickety mouse wheel. The whole mouse makes a very stable impression. Only one thing struck me: The two buttons on the left side can be activated through the housing by pressing too hard directly under the buttons. However, this is not accidental to me – and fortunately does not happen while playing – because you need a relatively high pressure for it. That is why, in my view, this small mistake is not a drastic flaw. 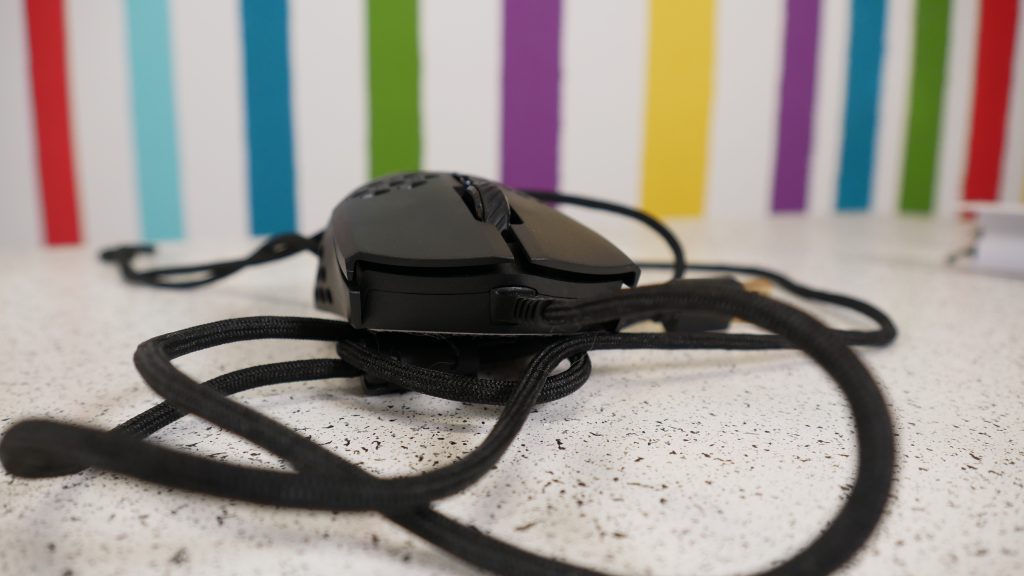 Buttons
The MM710 has a total of six buttons, the two main keys, two buttons on the left, one button behind the mouse wheel to choose between DPI levels and a mouse wheel click. The two mouse buttons use an OMRON 20M switch, which feels very tight when clicked and gives a quiet click when activated. The clicks are very satisfying and the low power required for activating greatly enhances the precision. 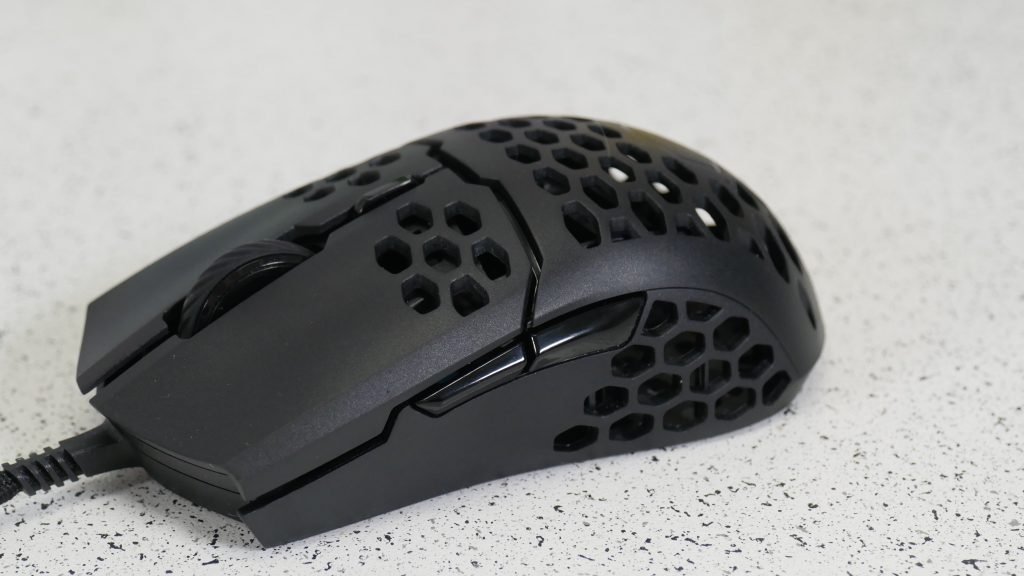 The mouse wheel scrolls a bit heavier than I'm used to, but the individual steps are so much more accurate to hit. Mouse wheel clicks are just as precise as the normal mouse clicks and are not too indulgent, otherwise they could be triggered accidentally while scrolling. The button behind the mouse wheel is easy to reach and almost impossible to activate due to its position. In my opinion, the two buttons on the are perfectly above the finger and are therefore easy to reach. The clicks are absolutely satisfactory and not too easy or too difficult to activate. 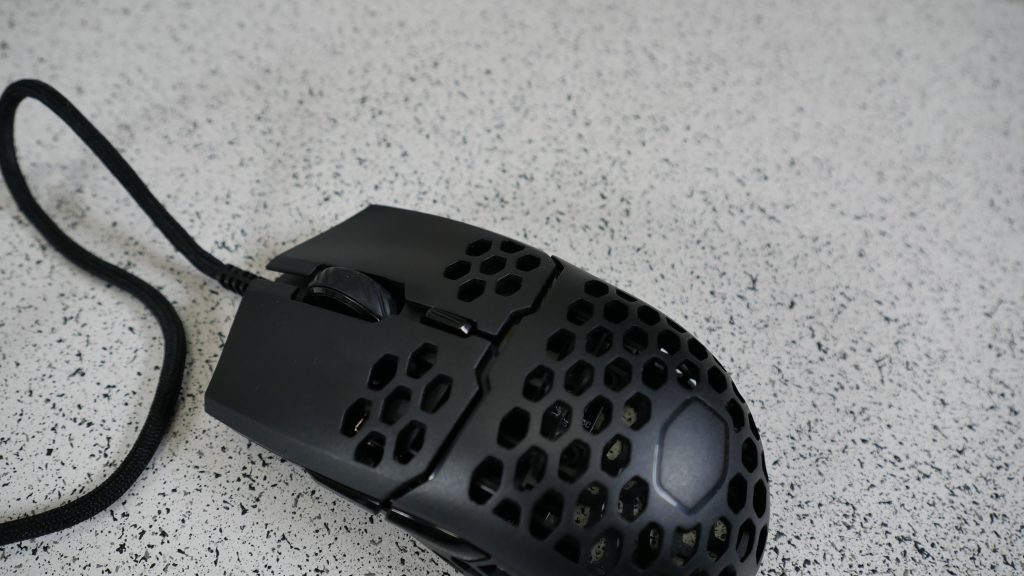 Eliminate Wi-Fi problems and optimize the network: what you need to know about MIMO, 4×4, thick walls and the right technology | Test
1More Portable Bluetooth Speaker – A cheap entry into the middle class?