Since we want to test as soon as possible how such a solution behaves compared to closed compact water cooling, we simply reconstructed and assembled the Alphacool Eiswolf GPX-Pro 120 AiO ourselves, because the used... Easy conversion - if you know how to do it Alphacool provides an assembly instruction in the form of a leaflet, which describes with text and graphics each of the steps that you have to perform. However, at this point we want to... Temperature measurements on the GPU diode First, we measure tmeperature development in the GPU by completing three one-hour runs with different scenarios. First, the Metro Last Light card must be in 4K resolution. Noise emission ("volume") In order to be able to measure this construction neatly and objectively, you need not only a suitable measuring room but also a calibrated, broadband neutral measuring microphone with low-cut (via a calibration...

Since we want to test as quickly as possible how such a solution behaves compared to closed compact water cooling, we simply reconstructed and assembled the Alphacool Eiswolf GPX-Pro 120 AiO ourselves, as the components used for the GeForce GTX 1080 are also available as line items. However, we use a 24 radiator instead of the smaller 12 – so in the end our model would be more of a (sometime coming?) Alphacool Eiswolf GPX-Pro 240 AiO.

We combine the NexxxoS GPX-N 1080Pro-M01 as a pre-filled cow block with integrated pump and two hoses with quick-release fasteners as well as the matching 24 cm radiator (instead of the 12-series of the AiO solution) with two additional hoses including quick release.

This cooler fits the reference boards of the GeForce GTX 1080 or GeForce GTX 1070 from Nvida. The scope of delivery includes the actual cooling block, which could later be easily replaced with another model (e.g. graphics card update). It carries the already assembled pump and full-fledged threaded connections with two connected hoses with quick-release fasteners and is already pre-filled. 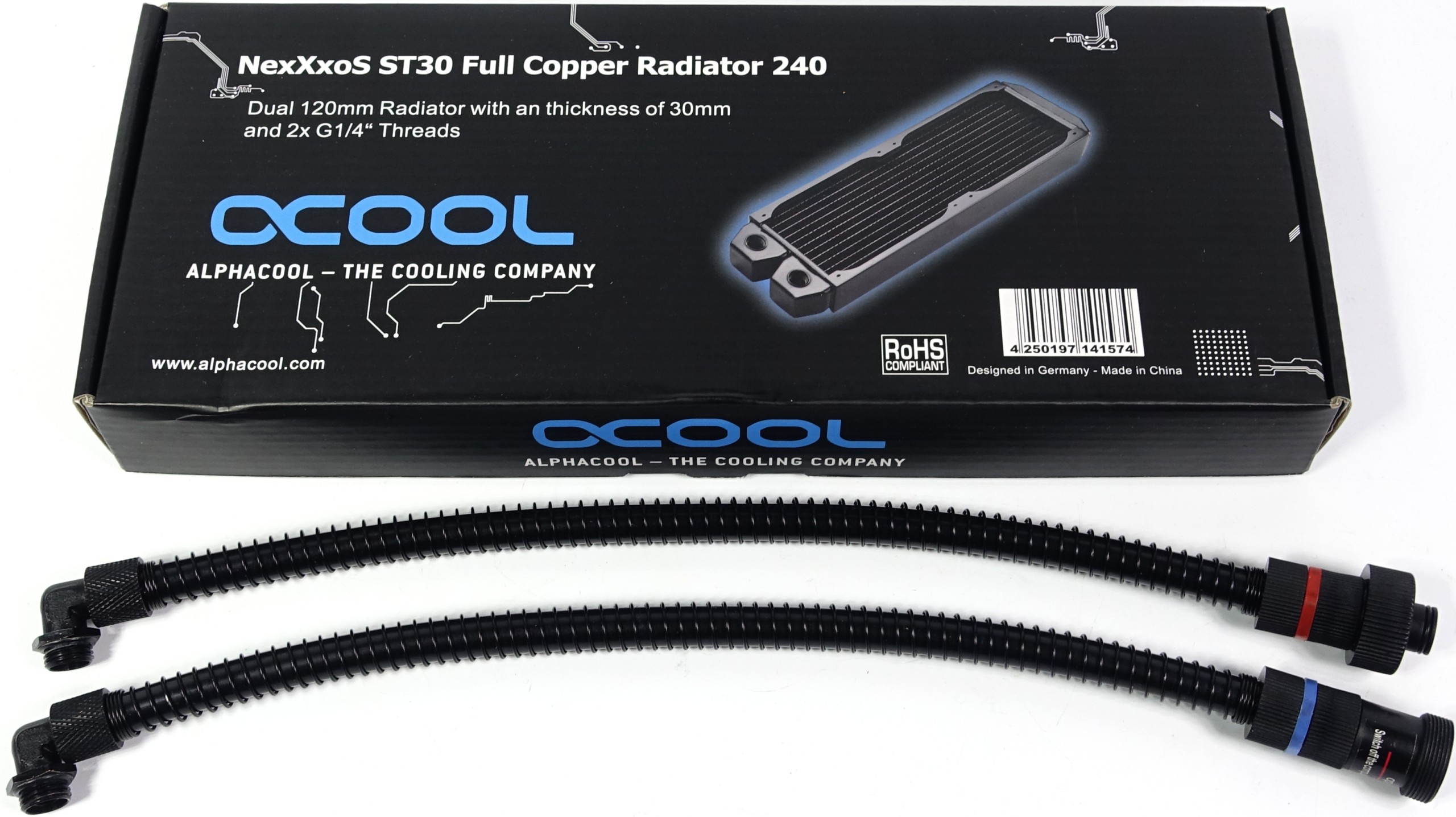 In addition to the instructions, the required thermal guide pads, screws, washers, mounting aids and of course also thermal conductive paste and a backplate are included in the scope of delivery, which not only offers a better look, but also an important cooling function, such as we will see later. The matching hexagonal key is also encased. 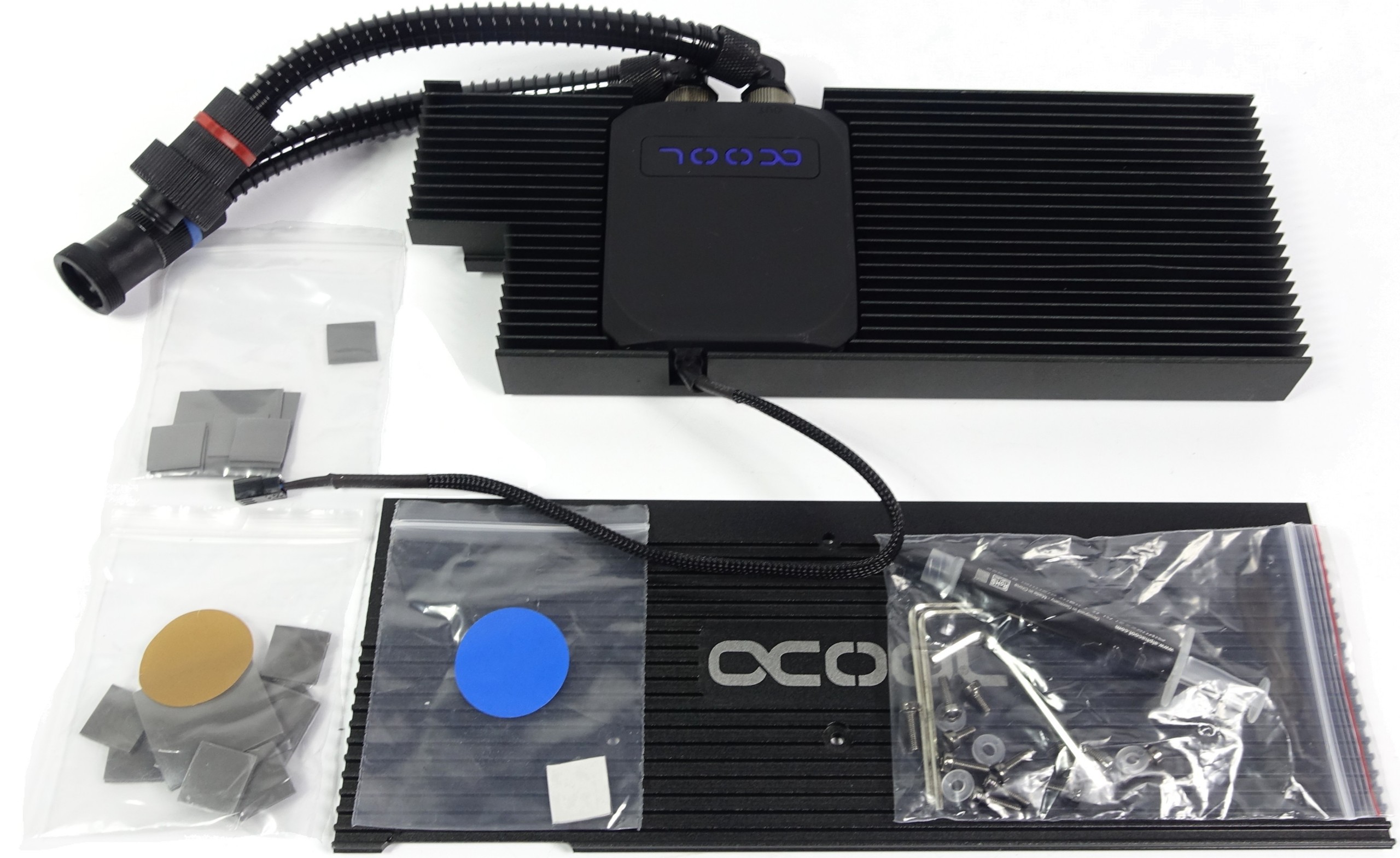 In direct comparison: two coolers, one board

However, like the Corsair cooling system, we do NOT rely on a 12-seater radiator on MMI's Sea Hawk graphics card. After all, users who plan and realize a conversion almost exclusively resort to 24 radiators (or larger) when analyzing the order lists and shopping baskets. We can therefore beat two birds with one stone in the test and find out whether, firstly, the larger cooling circuit brings benefits and, secondly, whether the absence of active airflow will be significant at all.

Thus, also during the acoustic check two fans on the Sea Hawk (1x 12 cm on the radiator with 1200 rpm and 1x 9 cm hybrid fan with 1100 rpm ++) compete against two firmly set fans at 1000 rpm on the Alphacool solution (both on the radiator). By the way, we use an interesting solution from Alphacool for this, because they are actually bionic eLoops from Noiseblocker, which as an OEM product were labeled and color-coded only, but are technically identical in construction.

In doing so, we are also consciously taking a perceived disadvantage. Presumably because it has now been practically proven that such fans can perform quite well on non-excessively thick radiators up to 4.5 cm thick and normal slat spacing – even if the large static pressure is missing.

The core of any water cooling: the pump

Now it's time to get down to the real thing, although we still have to pick up a little further at the beginning in order to be able to correctly classify Alphacool's drive to take a completely new approach to the solution. Who remembers various scandals and scandals – for example, the trials against Cooler Master in the heartland of patent trolls, the USA? This is exactly what you have to protect yourself from as a provider.

Asetek, a pioneer of all-in-one coolers and AN OEM for many vendors, has become quite petty when it comes to AiO cooling solutions with pumps integrated in the heat sink. The present also shows very clearly that, as market shares fall, we are increasingly moving to overrun competitors with more or less justified patent claims.

To stay out of all this mess (i.e. when it comes to what is patentable and what is not), Alphacool has simply turned the skewer (in this case the rotor). So what is so beautifully called a "reverse flow" pump in New German is actually a "sauge", in which the cooling water is not pressed on to the micro channels, probes are actually sucked in the opposite direction and "spit out".

Let's take a look at two sheets of Alphacool's patent specification that we were able to obtain to understand how something patented is depicted and described as a pattern.

The right figure shows us the actual pumping or Suction process pretty easy to understand. The advantage of this solution is a significantly more swirl-free water flow, which, in contrast to ventilation cooling in this form, is also desirable. In addition, it also reduces the formation of small bubbles ("micro bubbles"), which can lead to noise or "zirpers" of water coolers.

However, we must not hide the disadvantages, which primarily include a little less efficiency. Our test must now show how Alphacool ultimately came up with the trade-off between cooling and operational noise emission. Desahlb we build our new cooling system on the next page.