In this article, we don't just want to limit ourselves to a thermal paste comparison with (de-)assembly instructions, but also to show why some cards simply can't cool better and why you can't cool the entire cooling system, including the fans... Dismantling without depression Before screwing, for example, with GPU-Z you should log the temperatures in the idle and under load for at least 30 minutes and record the room temperature. This will help to better incorporate the result later... Test setup and measurement methods In order to guarantee a truly comparable state (ambient temperature, airflow) between the individual measurements, we use a very light, indirect airflow in the measuring room, which allows the waste heat at the end of the map and... Thermal guide pads for advanced users: miracle or glare? Let us now turn to what is often neglected enough, including by industry. Next, let's look at the tape used by XFX on the voltage converters. Here is...

In this article, we don't just want to limit ourselves to a thermal paste comparison with (de-)assembly instructions, but also to show why some cards simply can't cool better and why you absolutely need to keep the entire cooling system, including the fan control, so that there is no evil awakening later on.

We also want to investigate the Urban Legend that the thermal pastes of the manufacturers are cheap and bad per se, and check whether at the end of the hype of sharply lower temperatures after a graphics card conversion, perhaps other causes than the use an expensive noble paste.

With the XFX RX 470 4GB in this article we use a card that shows us all facets, more or less gratefully accepts all changes and also shows what can go wrong – albeit unintentionally. This starts with the manufacturer and ends at the domestic table. In order to cover the remaining facets, we will of course also use other products on a case-by-case basis.

IMPORTANT PREWORT: We would like to draw attention to the respective warranty provisions of the manufacturers. After all, a possible loss of warranty can outweigh any small gain in cooling performance!

If even a screw necessary for dismantling carries a manufacturer's seal as shown on the following picture, then one should be absolutely aware of the consequences of an intervention! Destroyed is destroyed and discussions in the aftermath can be lengthy (and often unsuccessful).

Manufacturers such as EVGA explicitly allow the conversion, other companies (e.g. XFX) explicitly ask for this. So here only a look at the terms and conditions and the warranty provisions of your own graphics card, which must be visible to everyone, helps.

Companies such as MSI occupy a medium position, which insist only on the professional assembly of the cooler when sending back in the RMA case and point out that the damage caused is not caused by the conversion or its direct or direct indirect consequences may be the result. Or – and this is the grey area – the manufacturer dispenses with such a seal, but explicitly does not write anything about the cooler change or. -conversion.

Note pad #1
The manufacturer's warranty terms and/or It is best to check goodwill directly before purchasing and, if necessary, ask for it yourself.

There is nothing worse than over-the-top and no longer grasping threads or threads. damaged screw heads. Therefore, the following applies here: the best is just good enough! Cheap precision mechanic sets from the discounter's burial table are useless and are often produced so cheaply that the bits or screwdrivers are softer than good butter in the midday sun.

Ideally, you can get a good torque screwdriver that protects against unintentional damage (and is also used in a similar way by many manufacturers). As a general rule, avoid crude violence and always remember that these are mainly very small and sensitive parts that want to be treated gently! We can only advise restraint and caution, because when something hangs or gets stuck, violence is always the wrong way to go.

Good mini-bits are often preferable to the bigger brothers, but then require an adapter to the 6.3 mm hexagon, if you want to use the torque colleague, which is available at prices starting from about 50 euros and actually for the basic equipment of an ambitious computer hobbyists. For this you need models, which are indicated with 0.2 to 0.4 Nm as the lower limit, because we will only rarely or never need significantly higher values – at least in what we intend to do.

We will now talk about the right torque, because our test object is actually the best proof that the Schlendrian is a quite present journeyman from time to time in Asia.

Before you go on an adventure safari, it is always worth checking all the screws. Because it may well be that we can save ourselves all the effort, just because too little care (and power) has been put into it.

Obviously, XFX did not have enough force to tighten the four screws around the GPU socket. The use of the torque screwdriver on these four screws alone brought a sofotous improvement, which was not directly in degrees Celsius, but was reflected in slightly lower fan speeds.

However, we can already spoil the fact that you can't get past the temperature target of a map – exactly the target temperature on which the whole fan cue is almost always based. But that's more than that, if we track the temperature differences.

Note sheet #2
There is nothing better than good tools – only better tools! In order not to damage screws, the right tool must always be at hand, which also sits perfectly in the screw head. A functional torque screwdriver from 0.2 to 0.4 Nm is not an absolute must, but the best you can and should buy for money in this regard. Mini-bits often fit better, but you usually need an adapter for this.

At the end of our introduction, we will briefly return to the topic of thermal paste and the legend formation mentioned above. The difference in quality between a cheap third-party paste and what manufacturers use is smaller than you think – and often non-existent.

It is not uncommon for a more careful screwing of the components alone to achieve a leap in performance and then, of course, to credit this to the new paste. We will see how big the difference can be without further material use!

There are only a few real manufacturers of thermal pastes or their basis, which is then often only more or less marginally individualized in order to establish a "new product" on the market through other consistency and color. The rest is marketing – and very often just wishful thinking. Many differently labelled pastes are even (almost) identical in the end, but can differ considerably by the price. In addition, physics and chemistry cannot be raped. 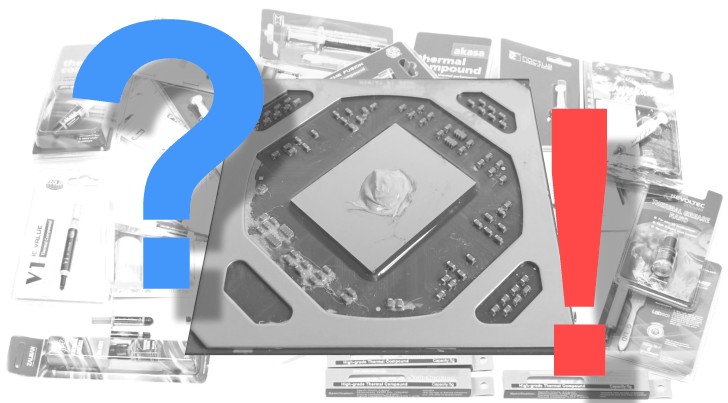 Based on this finding, it definitely makes no sense to use mediocre to good products, because here the effort tends to outweigh the benefits. You really have to switch to very good to outstanding pastes if you want to achieve a measurable and tangible success. Very cheap silicone pastes like Arctic's MX-2 are easy to apply and don't cost the world, but they don't take anything out of work and have long been out of date. Improvements will hardly be achieved, rather a deterioration.

Liquid metal must be rejected in general in this case, because the process is difficult to control; you need a lot of experience. Secondly, there is the problem with the possible guarantee or Warranty, because these "pastes" can never be removed without residue and without a trace, if a hardware defect occurs.

However, we will deal with the pastes and the possible preselection separately later on. As proof of what has just been written, we will compare the newly applied original paste with an inexpensive, a good and a very good thermal paste, which unfortunately also occupies the absolute top position in terms of price.

Note pad #3
If you are already daring to venture into such a project, then it must be the best of the best, because even the manufacturers do not slut. Often poor results are due to production, but almost never depend in full on the industrial paste used in each case.