With or without a subwoofer, caught up in nuances and the desire to cut the most tonally clean video possible. And no, I chose the headline with the question of whether the Nubert nuPro X-3000 RC or the nuPro X-4000 RC would do the trick, again anything but by chance, because actually, as with the first test, I wanted a treat for both: precise work in the video studio without annoying headphones and the standard sound after work as a reward and relaxation for stressful hours. And then the question remains, is the setup sufficient to be happy without a subwoofer and to use it only for fun?

From the outside, the nuPro X-3000 RC hardly differs from the X-4000, because the few centimetres more in the outer dimensions allow for a slightly larger mid/bass driver, but since the proportions are similar, you really only see the difference at second glance. Well, when lifting you notice the 2 kilos more and also the stand reports overhangs, where previously flush terminations were to be found. That’s exactly why I’m grabbing the first review today, reworking it and supplementing it with the nuPro X-4000 RC in direct. The nice thing for potential customers is the possibility to test and compare the products in their own rooms for 30 days without any obligation. After all, the room also has an indirect effect and not every loudspeaker is suitable for every location!

Because you have to hand it to Nubert, the 30 day trial is a great thing. You don’t have to go through the usual hassle with the right of withdrawal and put some middlemen in their place – Nubert still relies on honest direct sales and you can have everything delivered to your own home for testing. However, this should hardly be a risk for the manufacturer, as there will hardly be any unpleasant surprises during testing.

Accessories and scope of delivery

The speakers are not supplied as a pair in both models, but you buy two self-sufficient and absolutely identical individual speakers for stereo operation. Thus also the accessories turn out identically so that one must imagine everything now simply twice. By the way, this also has advantages, because you even have the remote control twice. One for the wife and one for herself. But what’s in the box now besides the quick start guide (linked below) and the manual?

In addition to the magnetic front cover, each box comes with the aforementioned remote control with battery, a useful HDMI-ARC adapter, a power cable (3 meters), a jack RCA adapter cable (1.5 meters), an electrical digital cable (coax, 3 meters), an optical digital cable (SPDIF, 1.5 meters), a stranded USB cable (type A/type B, 1.5 meters), and the aforementioned reading material for the beginner faction. That’s all you need, I just sorely missed the little nubi. Only, unfortunately, this one has become a kind of globalization victim, because for the manual belly brushing with paint you would need a new German manufacturer. Kitschy Asian Erzgebirgskunst does not fit into such an accessory box, that must remain original. Too bad, though.

Speaking of globalisation: the active nuPro range is now manufactured entirely (under supervision) in Asia. Together with a main manufacturer known in the industry, the products of the “furniture joinery” together with the products of the specialised suppliers of all components such as the chassis and printed circuit boards together with the practical selection of components also form a well-rounded picture. The sentence that you get what you pay for still applies here – with the necessary addition that this is then also monitored sufficiently well on site.

The rounded longitudinal edges, which we also found on the predecessor models, are supposed to avoid damaging edge dispersion and so Nubert remains more or less true to itself, at least with the body, which is a solid MDF box with the familiar black or white sanding varnish. Little excitement, but with consistency. Let’s look at the slightly smaller nuPro X-3000 RC first. The dimensions of 30 cm height, 18.5 cm width and 23.3 cm depth (including cooling fins) make the box considerably more compact than an older A-300, but no less potent because of that, as we will see in a moment. But that’s where the similarities end.

The loudspeaker inlets and the mountings have changed, especially as the front mounting screws are now covered by neatly fitted rings and a kind of implied wave guide has even been smartly implemented for the tweeter. The bass reflex port is located on the rear panel. The control unit with the OLED display has also improved, but I’ll come to that in a moment. With the 6.6 kilos per box you already have a decent heavyweight, which stands securely and non-slip on a total of four already glued rubber feet. If you want something different, feel free to upgrade. 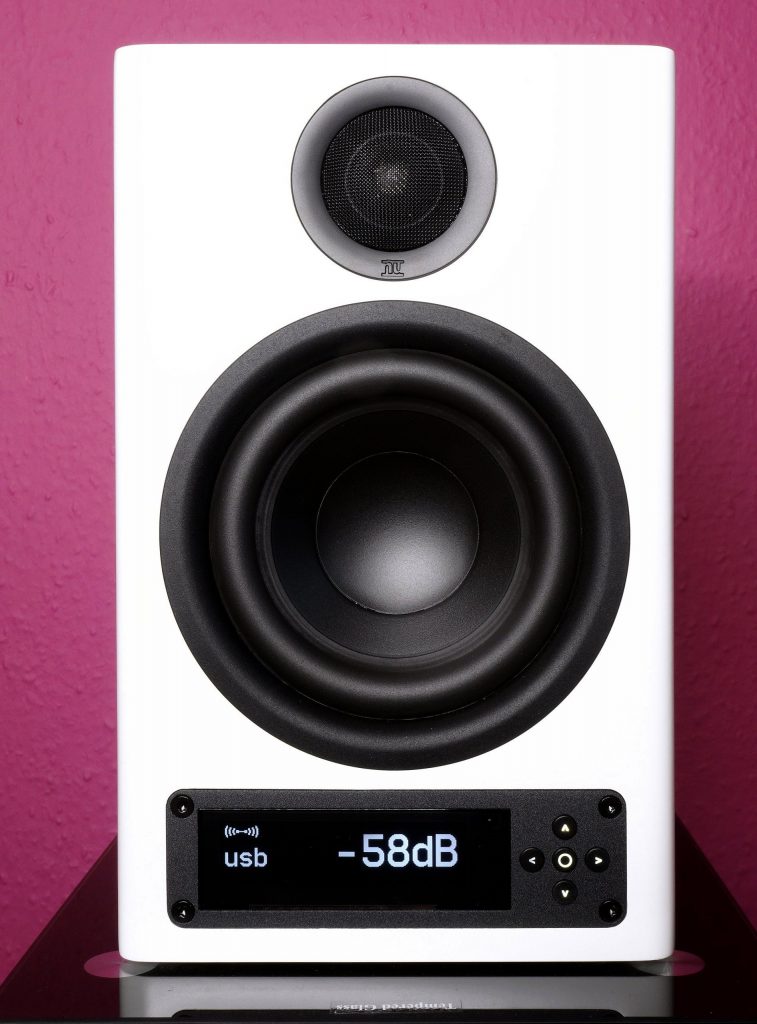 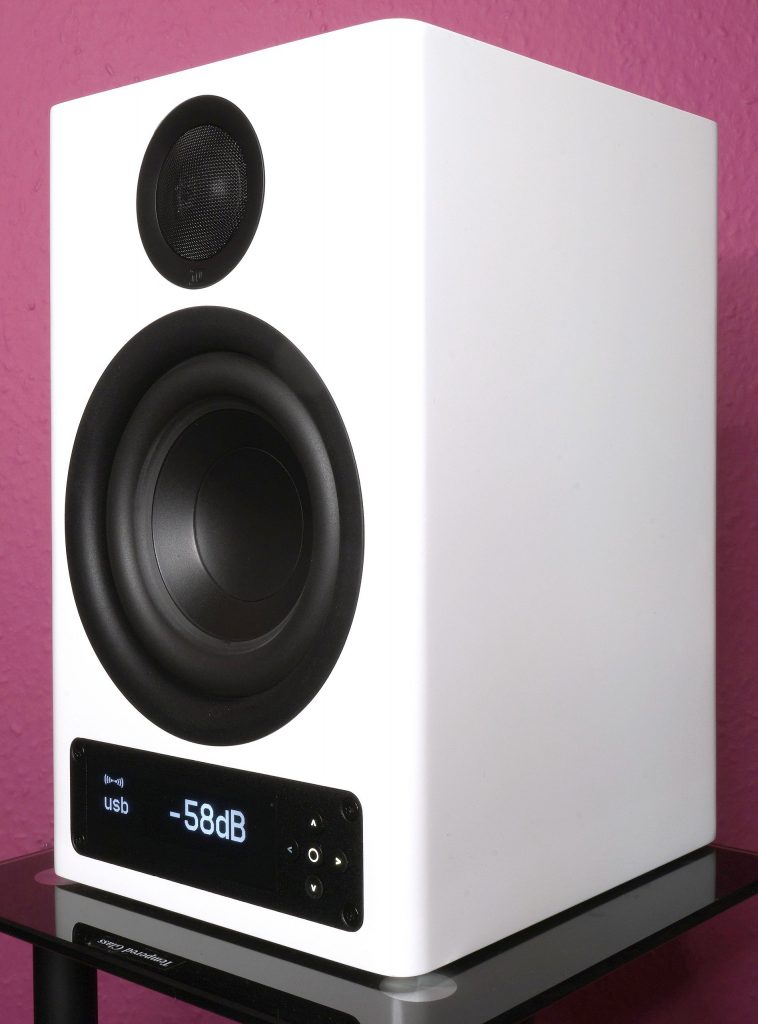 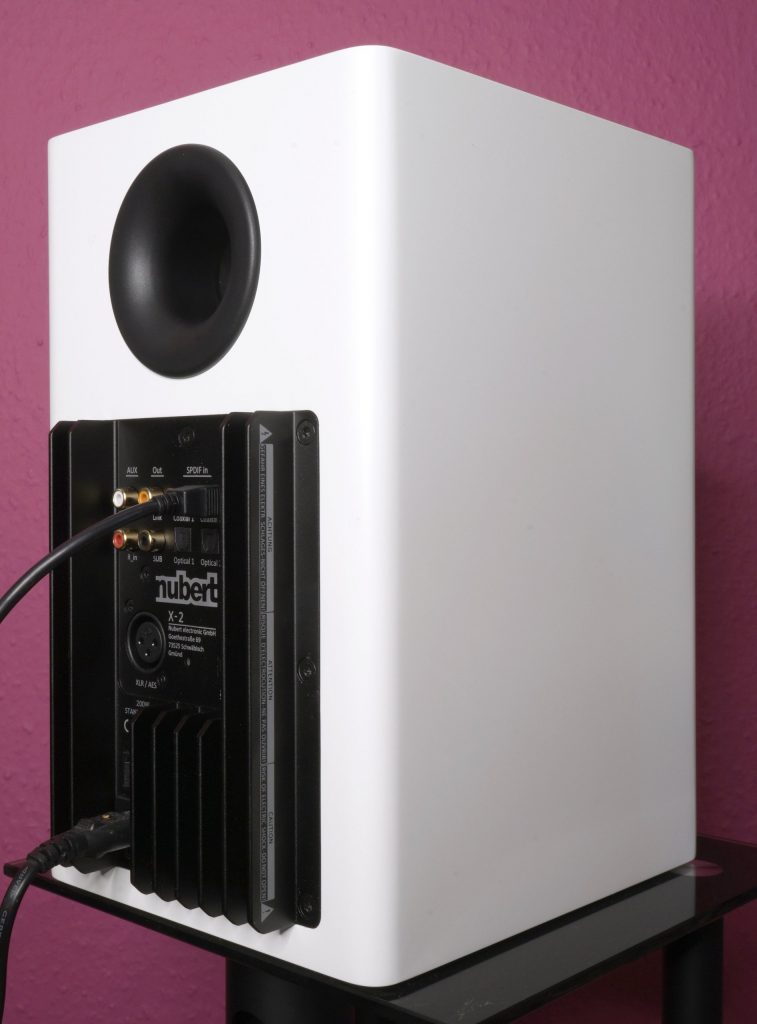 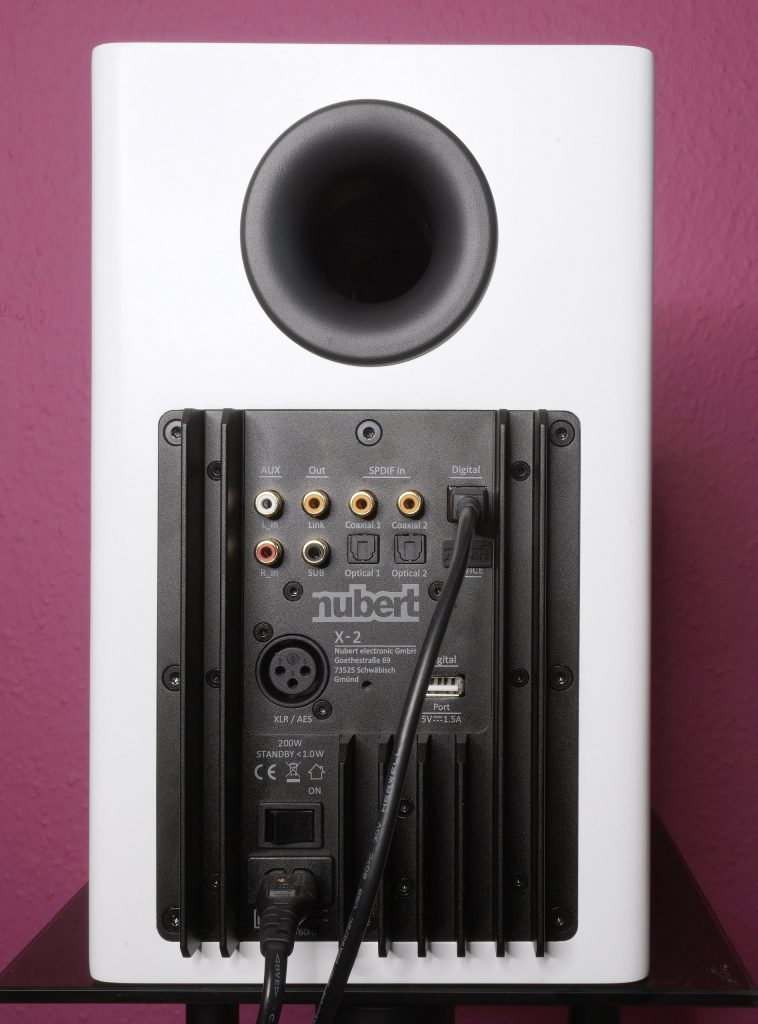 The nuPro X-4000s are a little more overbearing. The height increases by 2 cm to 32 cm, the width from 18.5 cm also by 2 cm to now 20.5 cm and the maximum depth including heat sink increases by 3 cm from 23.3 cm to 26.3 cm. You can hardly see that and you have to compare both boxes to notice the increase in size. Oh well, when you take a picture you notice it immediately because it doesn’t fit into the frame anymore. And yet the few extra centimetres allow a slightly different, harder pace – I’ll come to that in a moment. 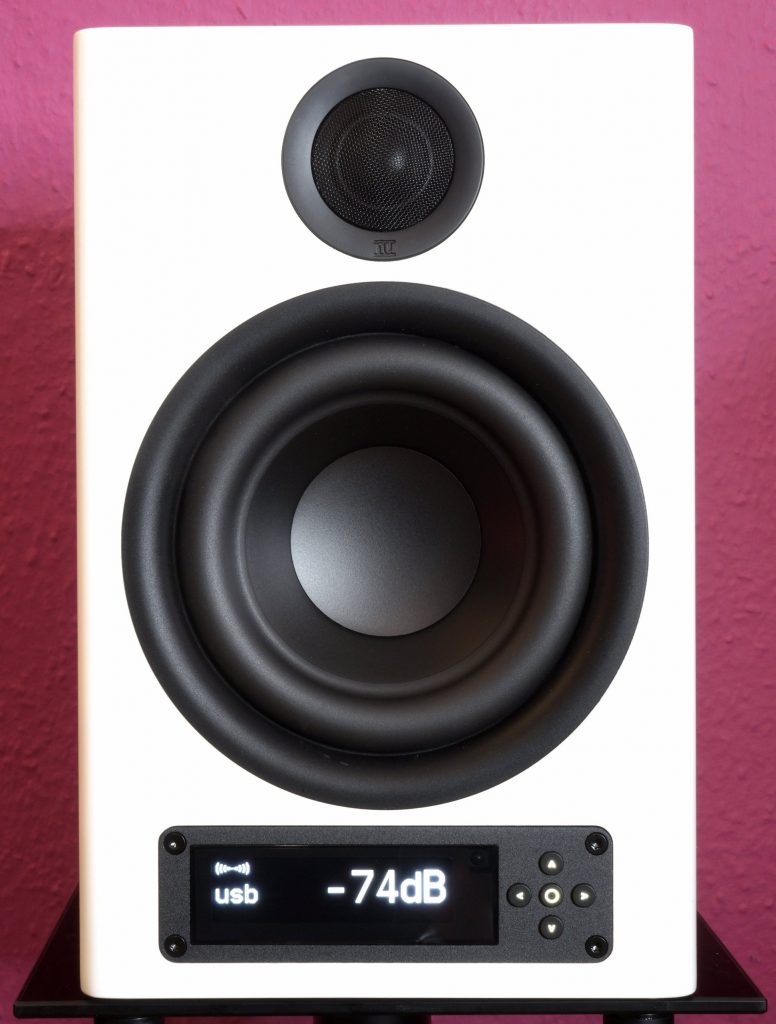 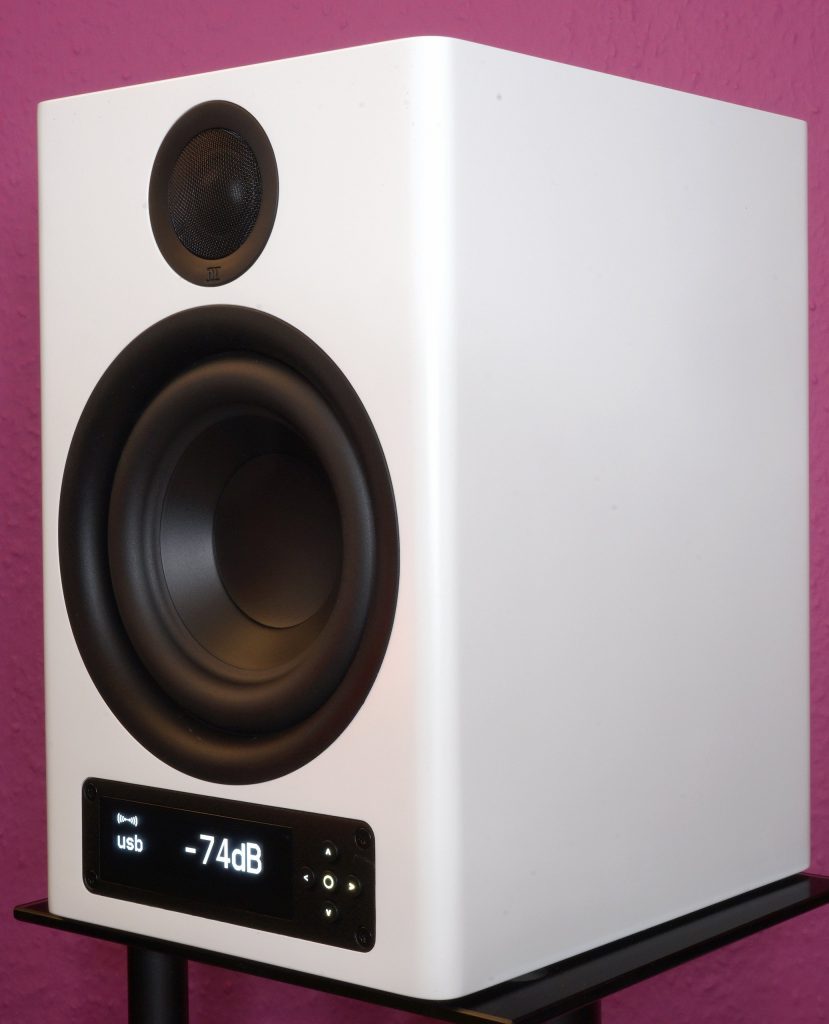 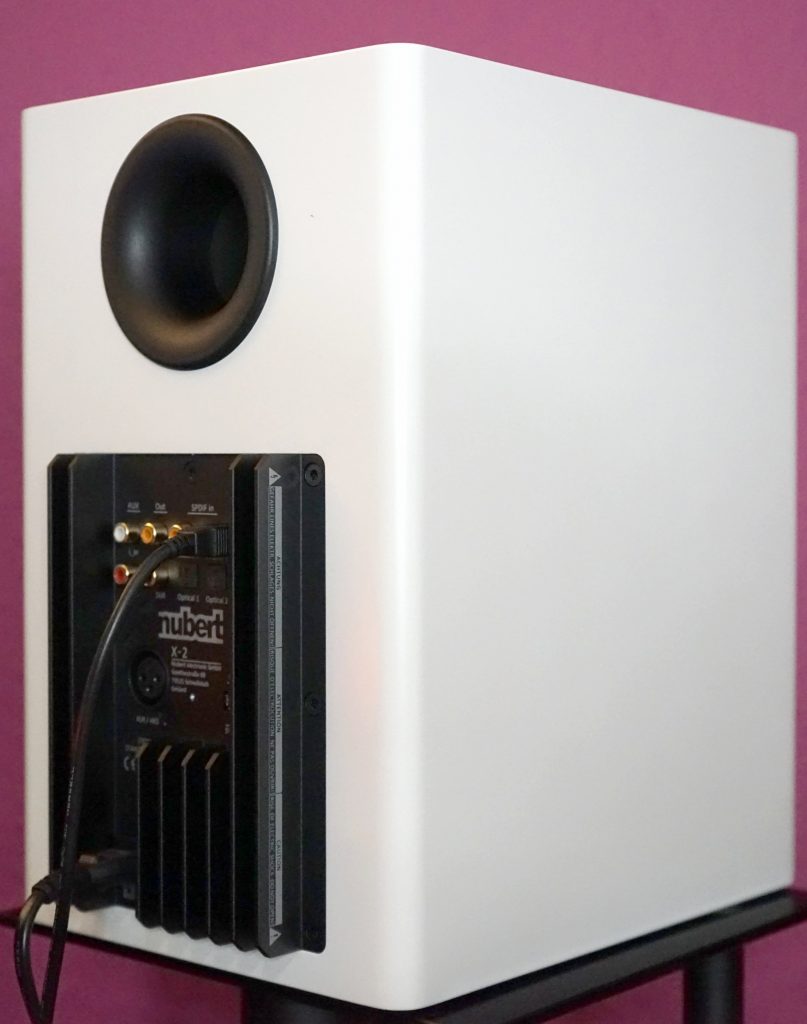 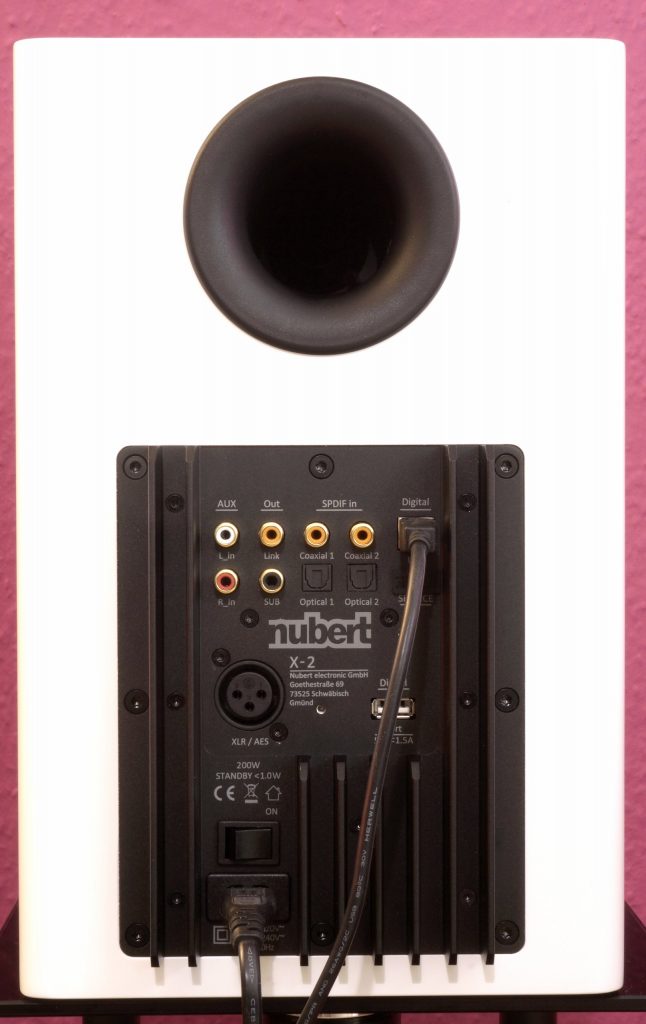 The chassis of the Nubert nuPro X-3000 RC and nuPro X-4000 RC still come from Peerless, although the Danish company is now just a pure brand after being bought out by Tymphany, and like almost all American offshoots has become “made in China”. At least with Peerless, this doesn’t detract from the quality for now. Moreover, it is always quite practical to produce the chassis, for example, right where you have large neodymium deposits. Rare earths are at least there not so rare and above all cheaper. The rest is an appealing series consistency, which Nubert would hardly manage so perfectly with a complete in-house production. This way, however, one can build on the existing and further optimize it oneself.

For the mid/bass range, Nubert relies on a newly developed 15 centimetre driver with a polypropylene composite cone for the smaller X-3000 RC; the driver for the X-4000 has a 1.9 cm larger diameter of 16.9 cm, which will be noticeable. The very large maximum excursion enables impressively deep and crisp bass despite the actually small diaphragm diameter of both drivers, because it has been possible to further increase the effective diaphragm area. Improved omnidirectional sound distribution and lower distortion are then included for both drivers. The die-cast basket and the rear ventilation suppress a possible heat accumulation quite effectively, which we can see later in the teardown. This significantly increases the load capacity of the chassis, especially in continuous operation.

The newly designed dome tweeter with the usual diameter of 25 millimetres has even more effective damping and improved dispersion characteristics, which is certainly also due to the implied wave guide. This tweeter is identical on both boxes. The (optional) front covers then hide exactly these two drivers, each of which is driven by its own power amplifier.

I’ll go into the circuit details in the teardown in a moment, which by the way are absolutely the same for both models except for small differences in the programming of the DSP and the supply voltage. However, for a better understanding, it is important to know in advance that these are not just simple active loudspeakers with an electronic crossover. Nubert relies on a D2-3(S) Audio SoC as the Digital Sound Processor (DSP). All analogue signals are converted to digital immediately after input and the entire processing up to the actual output stage is completely digital.

In addition, there is also a sophisticated active crossover, which enables perfect phase alignment of the high and mid/low frequencies and virtually eliminates group delay problems of the drivers. It’s at this point that the slightly larger-volume X-4000 RC is tuned a little differently, but not much. The bounce and impulse behaviour of both speakers is almost ideal. The largely identical power amplifier is a so-called UCD (Universal Class D) switching amplifier, which significantly improves the performance of an analogue switching amplifier. More about this on the next page in the circuit details.

The rear panel is dominated by the mounting plate, which houses not only the cooling fins for the power amplifiers but also all the connections. Which brings us elegantly to connectivity. A total of six digital inputs for Hi-Res signals should be sufficient in any case. Two coaxial, two optical inputs , as well as two USB ports are really sufficient here. The USB-B should not only be able to handle HiRes resolutions with 24 bit / 192 kHz, but also DSD 64. I was able to test it (not for now).

The USB-A can be expanded into a true TV companion by screwing on the included HDMI Arc module, and the power supply on this port can provide up to 1.5 amps at 5 volts. This could even be used to power a Google Chromecast or any usable Ethernet or WLAN adapter, because the network is left out of the factory for now, which is a real shame. However, the covered service port is off-limits for everyday use. 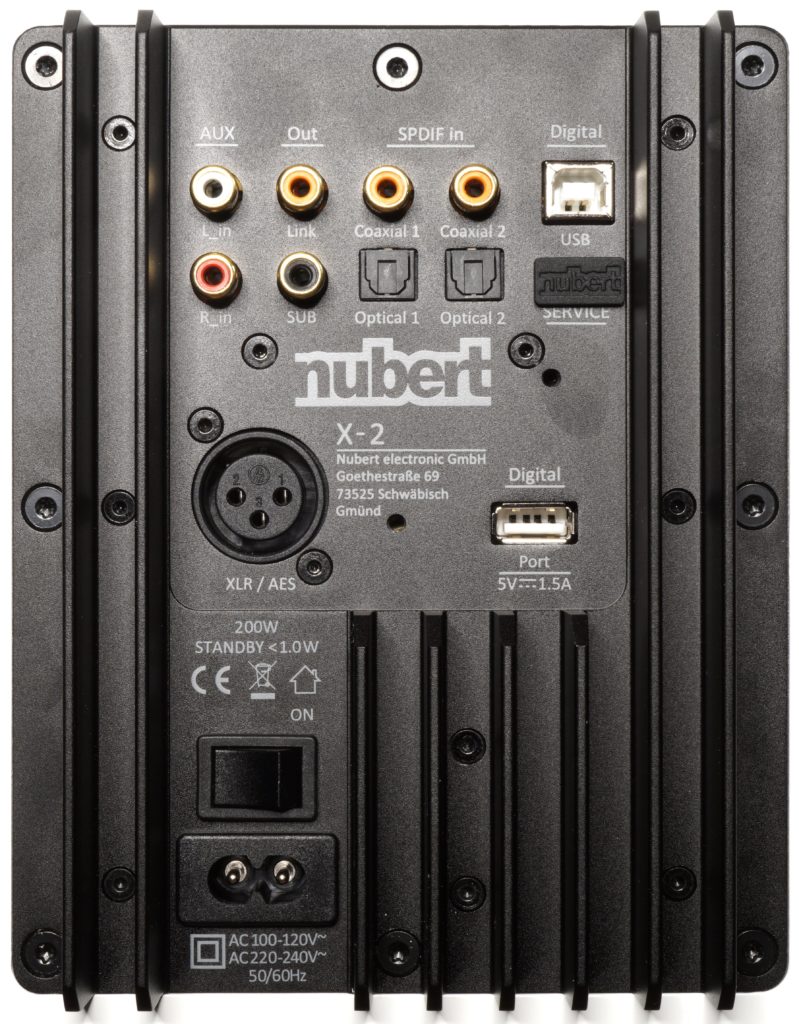 Interesting and new is also the combined XLR / AES input, which can be switched between analog and digital. This connection, which is already more special, makes it possible to keep analog signals free of interference, especially with long cable runs, thanks to the balanced XLR line. My mixer and microphones are happy. The digital AES/EBU input is the upper end of the digital connection chain and allows the direct loop-in of a re-clocker. You do have to have the proper technique and a trained ear, but then you are rewarded with even better resolution.

But analogue is still possible. A normal RCA input supplements the whole thing with input from analog sources. However, the input sensitivity is not very high and when connecting turntables, depending on the type of pickup (piezo or magnetic), there may be a level or impedance problem, with all the negative consequences. So you won’t get very far without a preamplifier or a suitable turntable output. Even in the significantly lower price range, manufacturers are showing more practical input variants.

The link port can be used to connect another box as a master-slave system for stereo operation. Or you can connect the two boxes through an internal, largely latency-free and lossless wireless connection. This also applies to the optional subwoofer, which can be connected analogue or wirelessly. What else? There’s still the usual Bluetooth transmission, relying exclusively on AptX. Hi-fi definitely works with it, although there is slight latency when using it on a TV.

A real power switch disconnects the device completely from the mains if desired, so it also fits. The standby power consumption of up to 0.7 watts (measured) per speaker is still acceptable. But I’ll get to the power supply and the special solution in a moment, which is the same for both boxes.

Now let’s quickly compare the technical data of both boxes as a summary: 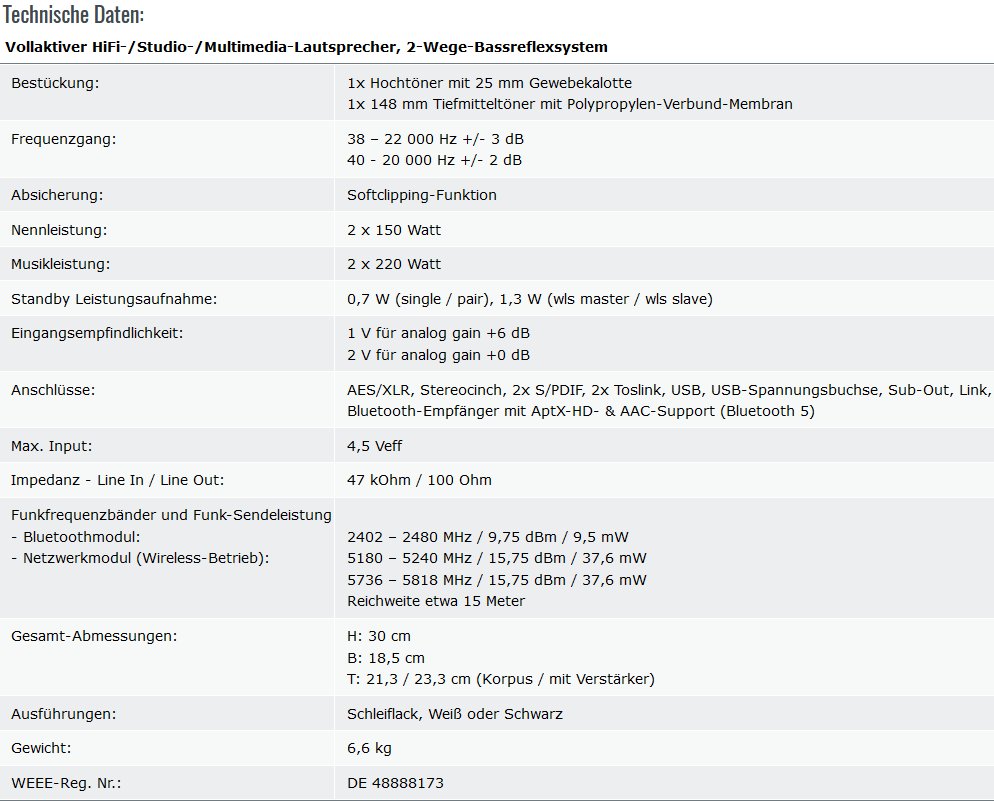 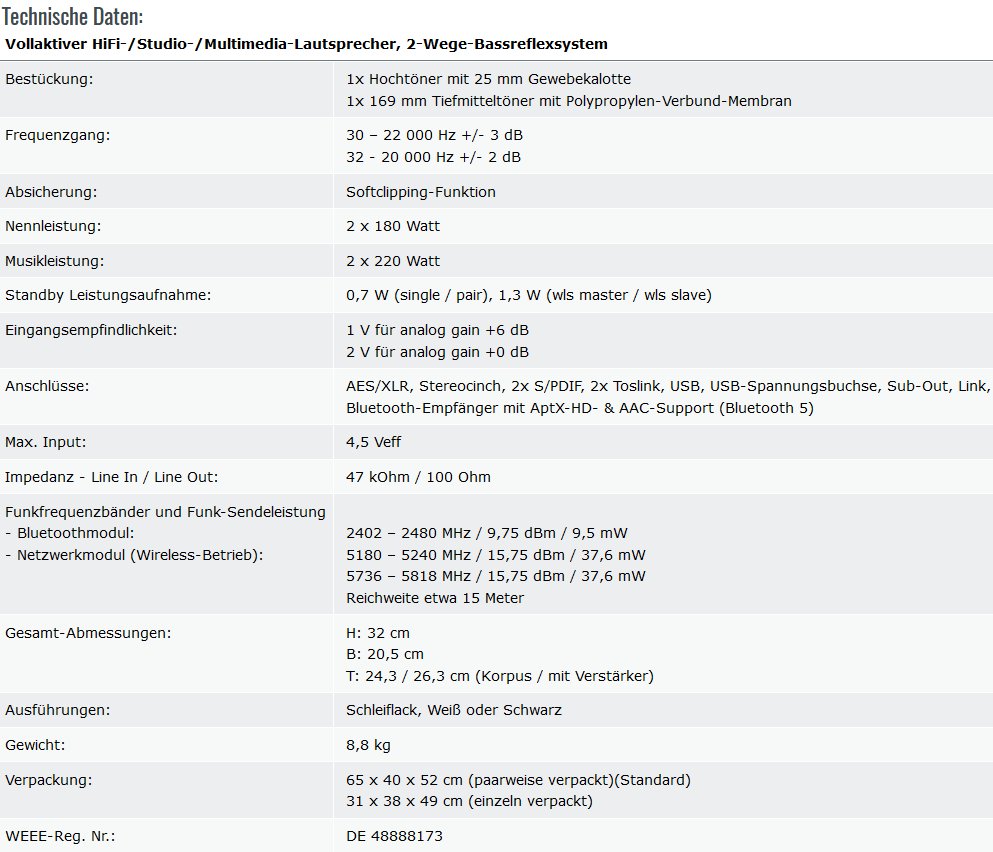