The part has already irritated me, if only because of the size, which should have been called small. Well, the Corsair One is completely custom loop, but here I don’t have the Frickelei with the watered graphics card. On a footprint of just under 19 x 19 cm and a height of just under 39 cm, the H1 from NZXT is quite compact. In addition, there is a decent mini-ITX motherboard in the form of the Asus ROG Strix X570-I Gaming and a Ryzen 5 3600X, which I have emulated for technical reasons with your Ryzen 7 3800X. There is also a longer video where you can watch me screw ingesth. 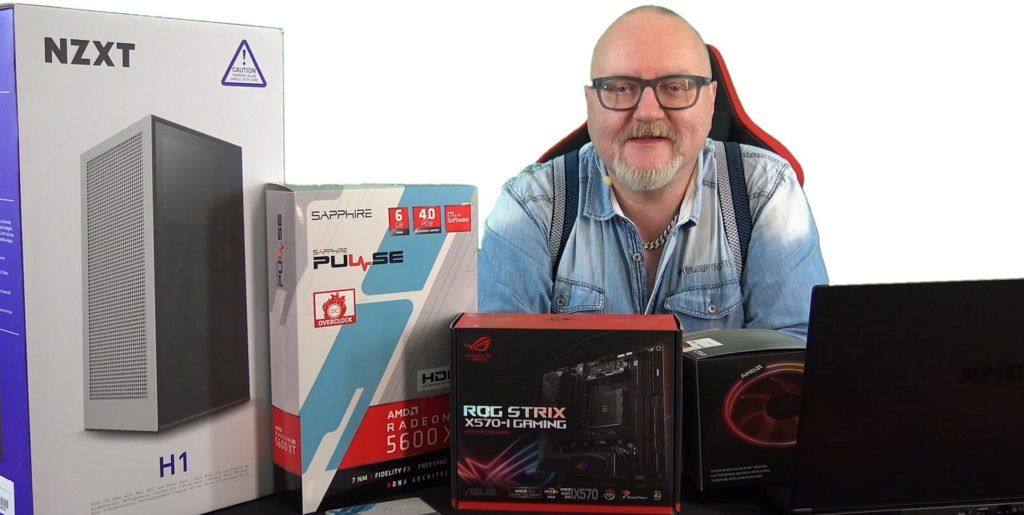 The motherboard is an Asus ROG Strix X570-I Gaming, one of the currently only three X570 motherboards available on the market in mini-ITX format. And it was also the only thing on which I could mount the two NVMe SSDs at all, because I really wanted to do without SATA components. With regard to RDNA2 and PCIe 4.0, all the old boards are eliminated down to the A320 anyway. Thus, you have a great selection with generous two options: buy or not buy.

However, the board is not bad, even if the HD audio connection is only accessible after the complete cover of the I/O area and the cooling has been unscrewed. The format is also much smaller, whereby Asus has at least thought of the appropriate adapter. The cooling of the SSD on the front is good, but the rear has to do without. It is also a pity that there is no 20-pin header for a connection of the Type-C cable (USB 3.2 Gen.2). You could trick with an adapter, but you only find a single large USB 3.x Gen.1 header on the board. So you can’t connect more than a single font USB like that, it’s a pity.

Well, you could have installed the Ryzen 9 3900X and wouldn’t have failed on the board and housing, but I just liked the idea of putting together and putting together something medium-class. By the way, this also applies to the graphics card, even if the Radeon RX 5600XT Pulse from Sapphire used here is not one of the absolute top sellers. But for less than 300 euros together with a game bundle (until the end of March) at the participating dealers, the 10 to 14% performance disadvantage compared to the RX 5700 is at least somewhat relative.

Because one thing should not be forgotten: in q4 we already expect RDNA2 and then the cards are reshuffled again – in the truest sense of the obligatory AMD word game box. The RX 5600XT isn’t even so silly as bridging and full HD pixel thrust, because the loss on sale in winter 2020 will hardly be greater than with the more expensive navi-cards. And an RX 5500XT I also felt a bit out of place for this project, 8GB back and forth. Hence the downgrading of the CPU to the 6-core, which makes much more sense in context. 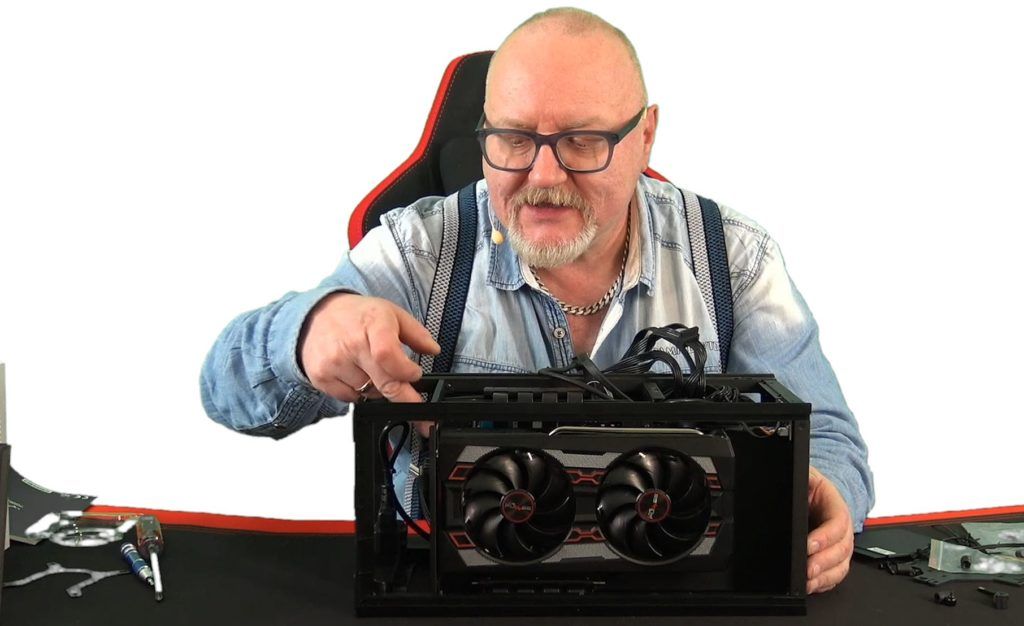 The Case – Unboxing and Facts

The H1 comes to the customer in two colours – in black or white. The use of neatly thick, but also extensively punched steel sheet is fine, because I measure in places a little ca. 0.9 mm, if you take off the powder coating. It’s neat and you can even feel it haptically. There is nothing swirling and swinging, which means that the price of approx. EUR 350 is also appropriate. You don’t see any screws on the outside, because the glass front and also the back can be easily taken out (clips). Then you can simply peel off the U-shaped hood with grooves held on the longitudinal sides. The technical data shows the following table 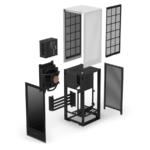 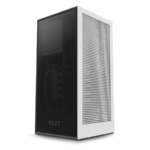 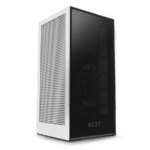 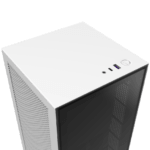 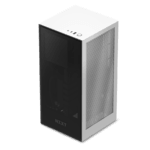 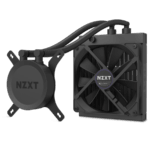 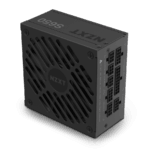 The case itself is quite cleverly designed because it relies on a solid SFX-L power supply with 650 watts of power and 80 Plus Gold certification. By the way, the part comes from the Seasonic shelf and is completely modular. In addition, NZXT has already pre-assembled and laid all cables in the maximum required lengths, so that the cable salad is largely avoided. This is exemplary and saves a lot of work. The graphics card is connected by riser cable (picture above) and is located in a different cooling zone. By the way, turning the cover to present the graphics card behind the glass, as some reviews show, is quite stupid, albeit physically quite possible. However, the card will be miserably sprained in schnapps, as its RGB ice lighting does not help.

The cooling is carried out by an AiO compact water cooling system, which is based on a system of the 7. generation of Asetek. The special feature is that the pump is no longer located above the cooling block, but in the front chamber of the radiator. The hoses are perfectly matched in length and the entire cooler can be folded out by medium tray and hinges quite comfortably. This way you can also get the motherboard mounted. wherethe 140 mm fan is protected from cables and hoses by a kind of grid. 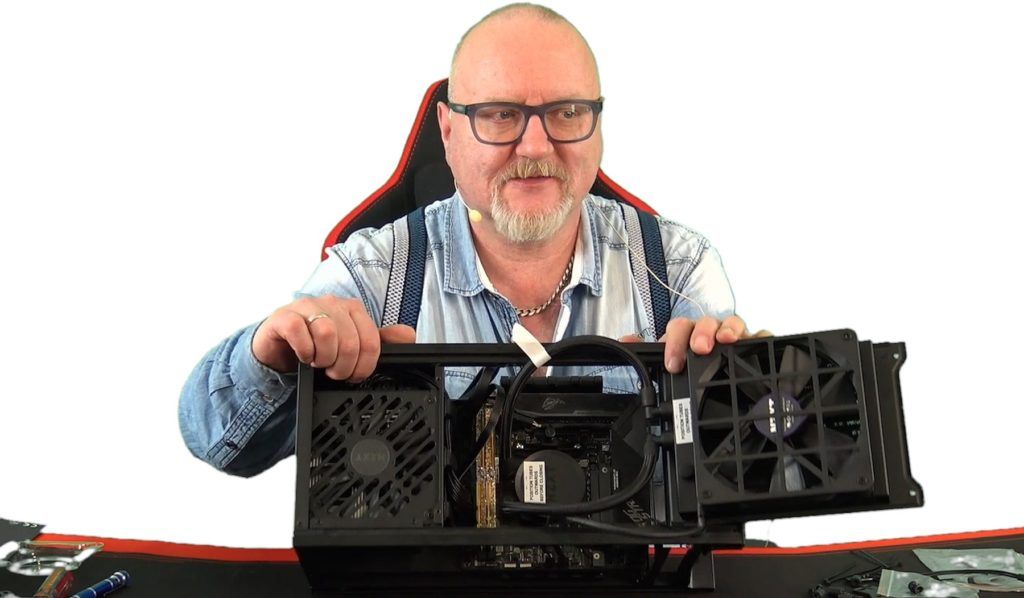 What remained somewhat unclear is the existing Type-C connector at the top, because in general you get into conflicts with the small mini-ITX boards (see note on the motherboard). Sure, downgrade would go, so USB 3.2 Gen.1 by adapter to 2.0 and the 3.2 Gen.2 to the big 3.2 Gen.1, but what’s the point? At least you would have a more jack externally. Well, yes.

The temperatures reached are really good. The CPU as an emulated Ryzen 5 3600X is hardly warmer than 50 °C even in the stress test and together with the full graphics card running at the limit you stay loosely below 55 to 56 °C. If you let the Ryzen 7 3800X run full without castration, it will only be 2 to 3 degrees warmer thanks to fan control, but then a little louder. But the measured< 40 dBA fürs Gesamtsystem mit Grafikkarte bei Volllast nach 30 Minuten sind vollends akzeptabel. Overclocking potential is there and with up to approx. 140 watts of power dissipation on the CPU remains just below the 80-degree mark. In addition, however, the temperatures explode extremely.

The graphics card still runs at 72 to 74 °C and is on average only 10 to 15% slower than a comparable Radeon RX 5700 from the same Pulse series from Sapphire. You can also live with this if you want or need to hold the penny together. 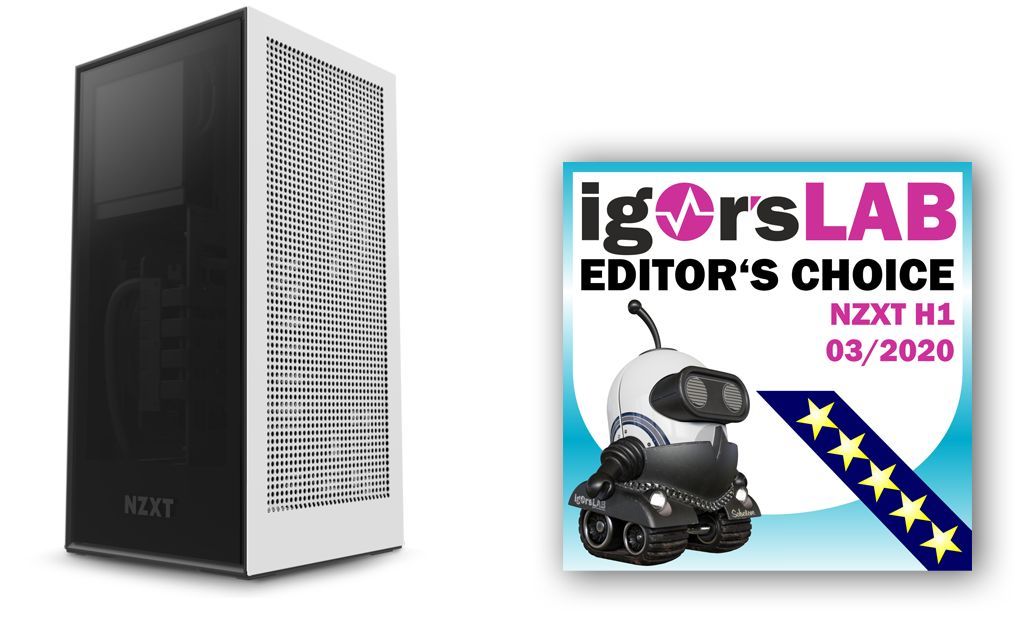 The case is well thought out, clean and solidly implemented, as well as explicitly something for mini-ITX noobs or at least people with big hands (like me) who would otherwise have physical problems with miniaturization. Everything in it and it even works really well. There’s even an award for that, at least. 🙂 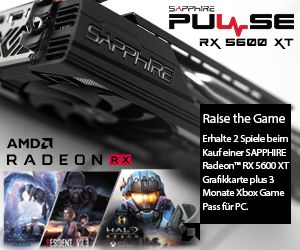