G.Skill is probably one of the best-known brands in the desktop memory market and of course, the Taiwanese manufacturer also has several interesting SKUs for the new DDR5 standard on offer, of which we finally get to test one for you today. Specifically, it’s a Trident Z5 RGB kit with silver heatsinks and DDR5-6400 CL32 XMP profile, which we will of course overclock, disassemble and scrutinize down to the last detail. 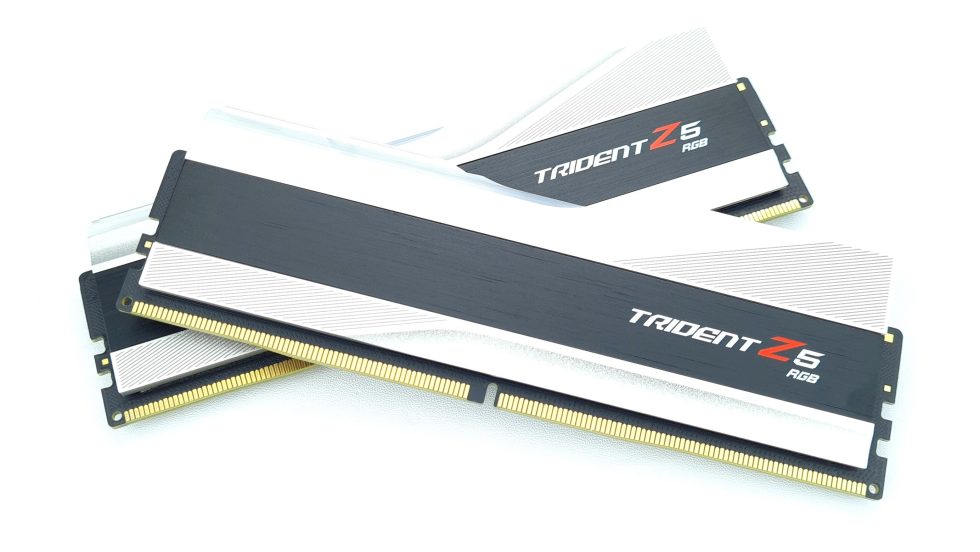 G.Skill’s new DDR5 kits have also appeared several times in our news recently. Whether with extremely fast DDR5-6600 CL34 2x 16 GB or the lush DDR5-6000 CL30 2x 32 GB variants, the Trident Z5 offerings continue to set impressive new standards for the industry. But G.Skill also has the cheaper Ripjaws S5 product series on the other side of the spectrum, so there really is a suitable model for every gamer, creator or hobbyist.

If you have ever bought a TridentZ RAM kit, you will already be familiar with the packaging of DDR5. The two color variants of the RGB modules in black and silver are shown on the outer carton, while the contents can already be seen through a viewing window. Of course, the modules support XMP 3.0 for the Intel Z690 platform. 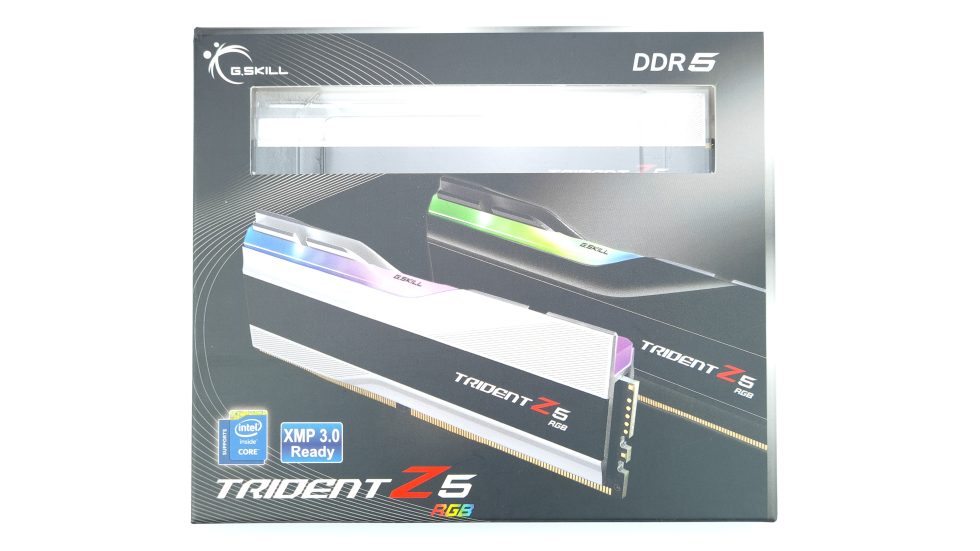 On the back, there are two more viewing windows through the box to the modules’ stickers, their product number, XMP profile and individual serial numbers. The product number of this kit is F5-6400J3239G16GX2-TZ5RS, where the front part already reveals the XMP specifications of DDR5-6400 at timings 32-39-39-102 and 1.40 V VDD/VDDQ voltage, and the second part stands for the type and color of the heatspreader. 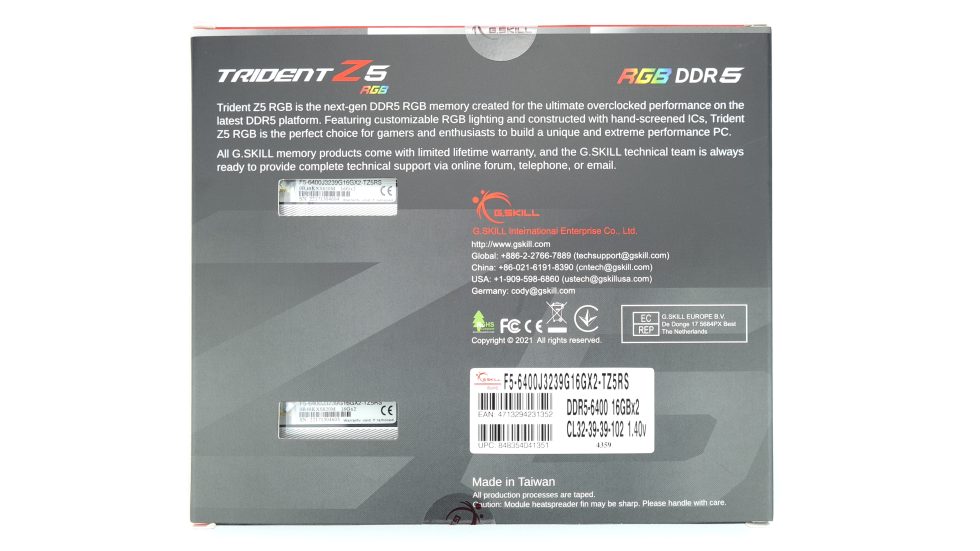 As usual, the RAM modules are then found inside a carrier frame made of transparent plastic, together with a red G.Skill sticker. 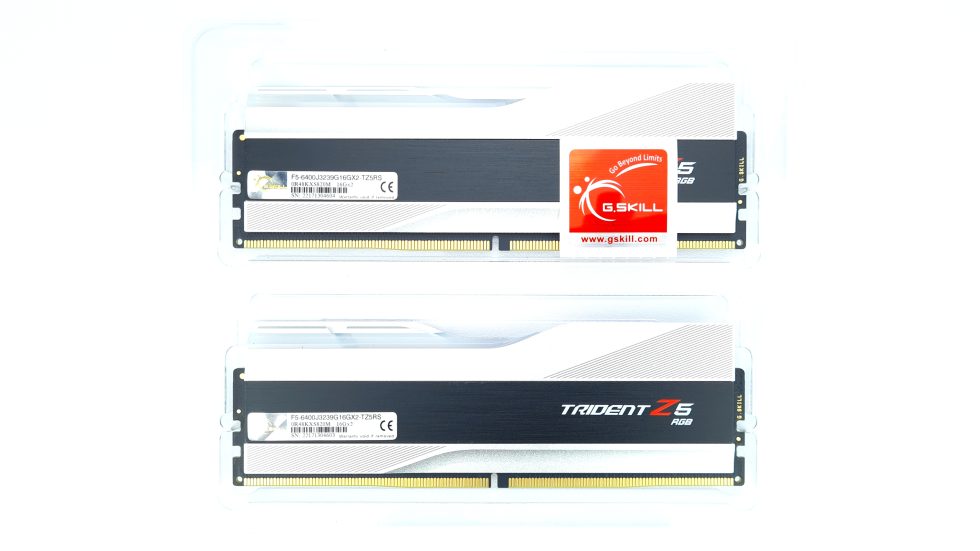 As a contrast to the main component of the cooler made of silver anodized aluminum, a black brushed element is still inserted in the center, which bears the Trident Z5 RGB lettering and the spec sticker on one side. 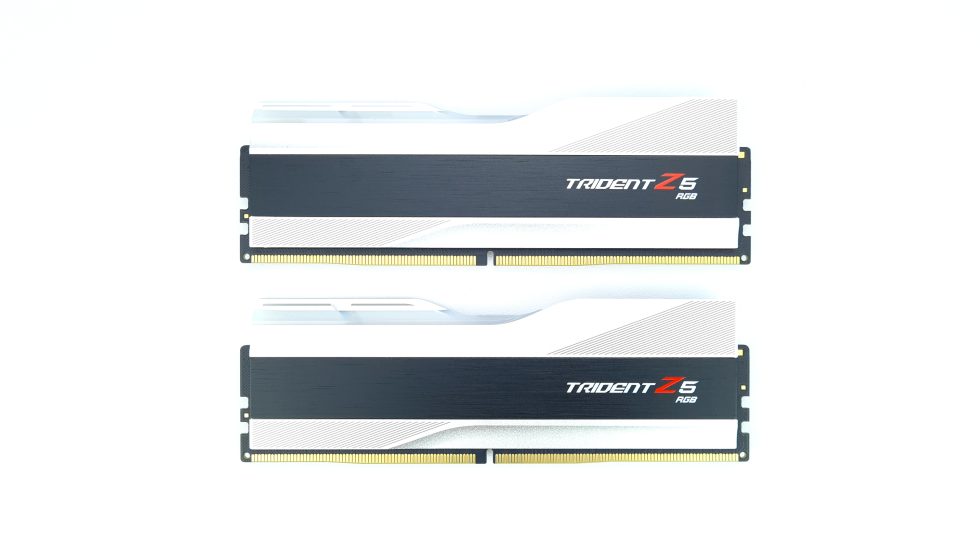 On the back, the modules look effectively identical, except that there is no sticker here and the G.Skill lettering on the PCB is also not present here, which results in an even simpler aesthetic.

The mirrored design of the cooler can be seen well from above. The two aluminum halves hold the white acrylic element between them, which serves as a lightspreader and still has a black G.Skill lettering in the center.

You can already see from below that they are based on a single-sided construction, as usual for 16 GB DDR5 modules. The back is filled with a spacer made of black foam. 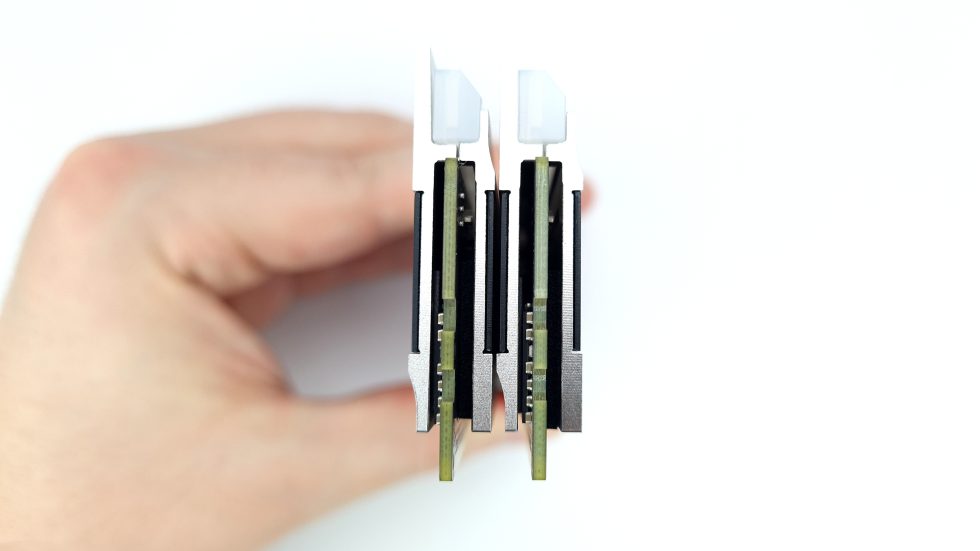 Finally, the two cooler halves, which hold the acrylic element in position in their center, can be seen well from the side. Also, from this angle you can nicely see the black aluminum strips that are flush with the silver cooler plates.