For the launch of the board partner designs of the smaller ampere cards with the GA 104 I have today the MSI RTX 3070 Gaming X Trio 8GB at my disposal, which MSI also offers with a RRP of 559 Euro incl. VAT. prices. But what the trade will then really approve of will probably also depend on the availability and range of competing graphics cards. Here we should also remember AMD, whereby the smaller Radeon RX 6800 already has a significantly higher RRP as a reference card. So it’s going to be exciting. NVIDIA has delivered, now the board partners have to make the most of it. 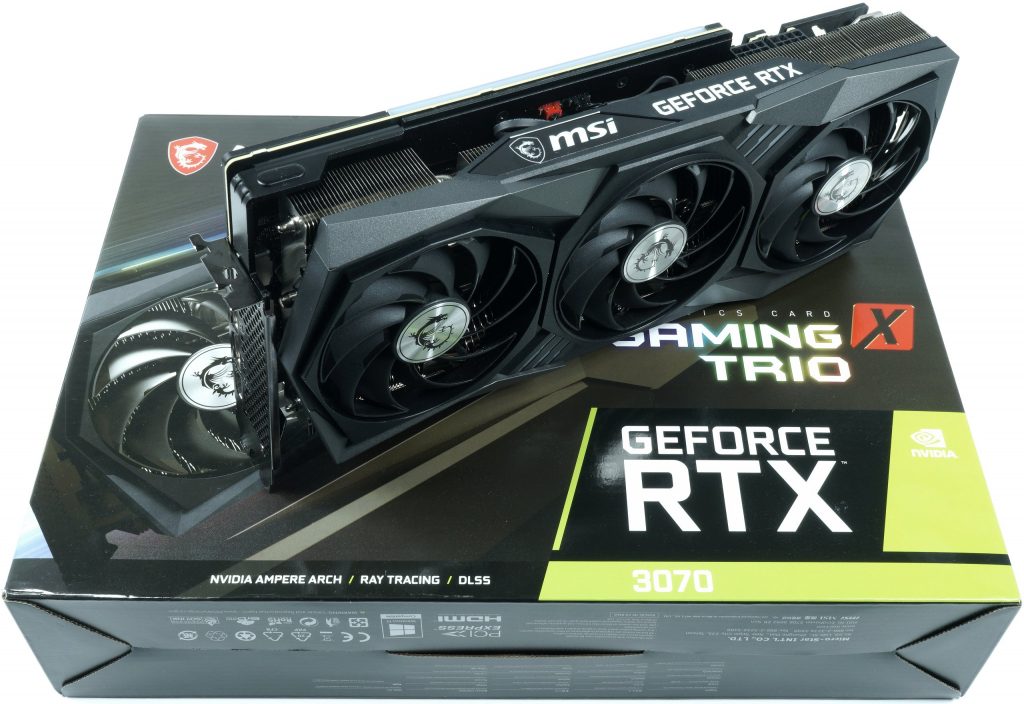 First of all some basic data about the used GA104 chip. For the GeForce RTX 3070, NVIDIA has enabled a total of 46 SM units, resulting in a total of 5888 CUDA cores. In addition to CUDA cores, NVIDIA’s GeForce RTX 3070 is also equipped with next-generation RT cores (ray tracing), Tensor cores, and the all-new SM or streaming multiprocessor units. In terms of memory, the GeForce RTX 3070 has 8 GB of GDDR6 memory with a speed of 16 Gbps, which has a cumulative bandwidth of 512 Gbps on the 256-bit interface.

If you now extrapolate the 46 SM, the already mentioned 5888 CUDA cores result. Ideally and only if all units are allowed to work with FP32. However, the gap to the GeForce RTX 3080 is quite large, so that many still dream of a GeForce RTX 3070 Ti even now. As a counterpart for a Radeon RX 6800, which at least for rasterization should be rated more highly, such a further slimmed down GA102 would certainly be an option, but this is purely speculative and could later be realized together with more memory than upgraded RTX 3070, in whatever process.

The case of the card is dominated by plastic, the design language is typical for MSI and based on the larger models of the RTX 3080 and 3090 Gaming X Trio. This also includes the sheer size with the three 92 mm fans. so that a high and, above all, also long card results.

With its 1544 grams, the card is significantly heavier than the Founders Edition, which weighs just under 1000 grams, but does not offer a separate holder for the card in the scope of delivery. The length of 32.4 cm is in the upper part of the Customs, but the installation height of a whopping 12.5 cm from the top edge of the PCIe slot with the card installed to the top of the cover is not easier to handle if the case is too small. The funny 12-pin Micro-Fit 3.0 on the top side was replaced by two normal 8-pin sockets, which were installed turned 180°. The usual RGB lighting system is available on the upper side under the logo and in the front as LED stripes next to the propellers.

On the one hand, the back shows two threaded inserts for optional attachment to a matching graphics card stand or bracket, the rest is a completely closed event with a view of nice five heatpipe ends. 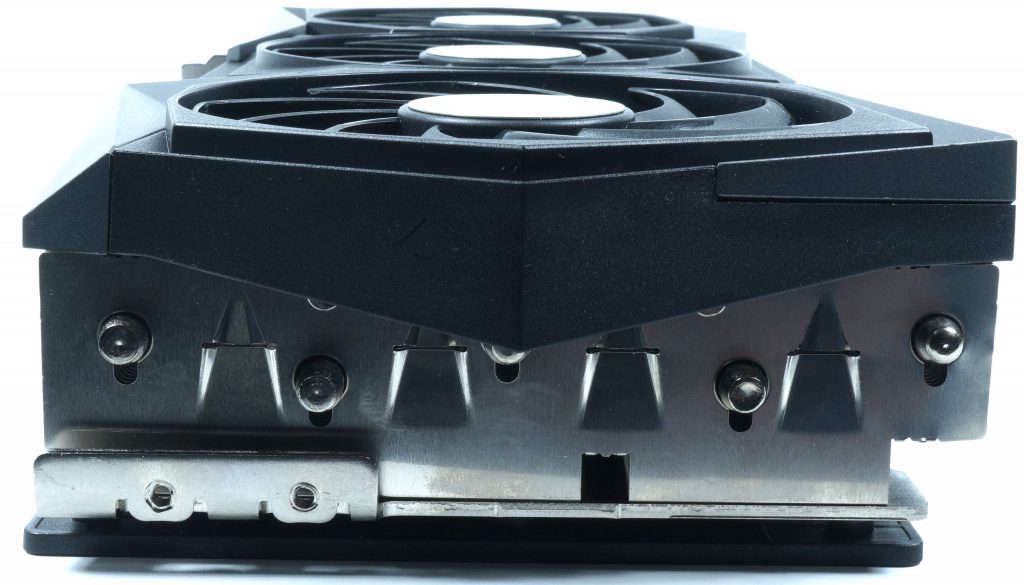 Like NVIDIA, MSI does without the USB Type C on the slot panel. Interestingly, AMD will re-record this feature on Big Navi, while it seems to have already finished here. The HDMI 2.1 connection should not be missing, and of course the three current DisplayPorts. The large cooling openings show that it could well be warm. Well, a little.

The data in the BIOS is slightly above that of the Founders Edition, even with a power limit increased by 20 watts to 240 watts. We already know the 1500 MHz base and the 1830 MHz boost clock is 100 MHz above the values of the Founders Edition. The rest like the 1750 MHz memory clock and the memory expansion with 8 GB GDDR6 at the 256-bit interface are then again identical. 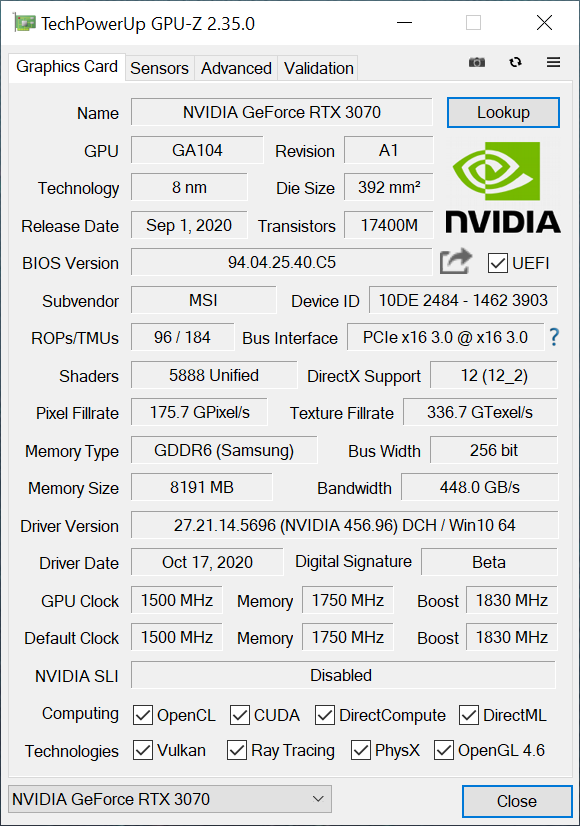 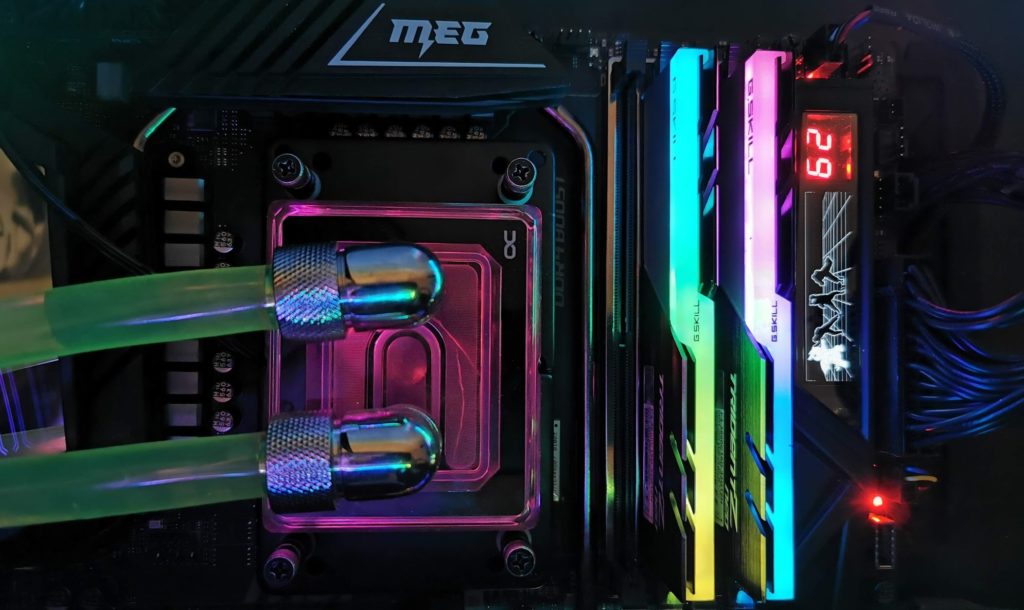 Challenge: BeQuiet must fight against the ampere transients today – igorsLAB in danger?
Crucial Ballistix 3200 MHz CL16 Review – Can Micron’s own brand keep up with the B-Die Top-Dogs?