I will not presume to call the Alchemist project a failure, because time and the market alone will decide whether it succeeds or fails. It’s definitely not my place, and there’s no need to belittle the developers’ invested work based on just one tested product. However, more and more pieces of the puzzle are coming together to form a conclusion that I don’t like at all in its development and form. Today’s article, however, reflects the concerns of system integrators and ready-to-use PC manufacturers as well as the OEM business of the big board partners and the mood of many a decision maker as to whether it would not be better to pull the plug now as a preventive measure or to continue.

In order to protect my sources, I will deliberately refrain from mentioning company names and persons, and I will also mark the whole thing as conjecture and not as a fact check, even though I am not sucking my information out of my fingers.

Let’s start at the top of the food chain first. Currently, many of the larger board partners are still sitting on massive amounts of inventory. This are unsold but already produced goods such as graphics cards, mainboards and other products. A lot of capital is currently tied up here, which in the end also leaves little financial room for experiments like the market launch of a new graphics card line. In order to be able to produce economically, it must be possible to produce certain minimum quantities and also sell them at a reasonable price.

However, it is a fact that Intel very clearly “suggested” to the board partners right at the beginning to (predominantly) do without the retail business for the Alchemist cards and to concentrate on the system integrators and OEM customers. Several representatives have confirmed this to me in the meantime. In addition, only local markets were released (as is known by now) and at least the first cards and also the ready-to-use PCs of the private brands were only available in Asia. However, if the focus is on the OEM business, there should also be customers for the products. Worldwide and in quantities. However, this is exactly where it starts to get interesting.

I have asked some dealers, potential distributors and also manufacturers in the European area about Intel’s Arc cards and the plans of these companies in this regard. However, there was predominantly little to no interest in even embarking on the adventure with this new product. And mind you, that was long before the first benchmarks and also our own tests of the Arc A380! The most important argument was always that Intel, in contrast to NVIDIA and AMD, could not or did not want to give any price guarantee and that the framework conditions and bases for cost drivers like RMA and returns were significantly worse than those of the competitors. 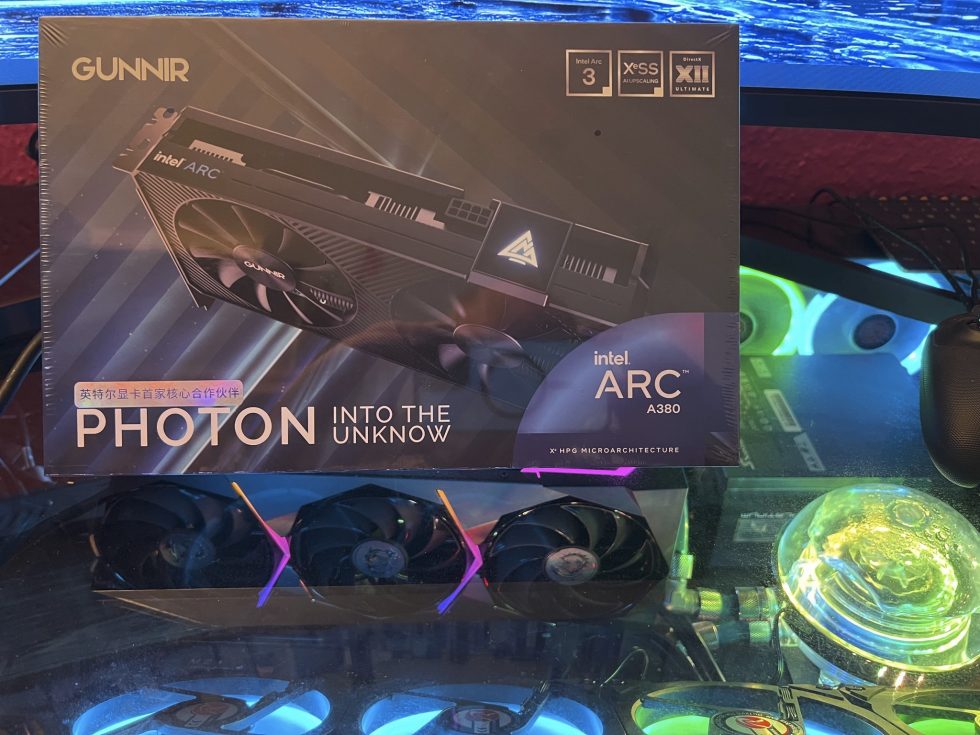 A product that no one really knows what it can do, however, needs a completely different framework for acceptance by the processing industry. I wouldn’t want to call that arrogance right away, but Intel has to accommodate the risk takers a bit (and offer something) and not just insist that everything with Intel on it sells itself. This is certainly exemplified by the fact that Intel is said to have had a hard time finding suitable launch partners in Germany. I know of more than one company that declined with thanks due to the general conditions.

Without this interest from commercial customers, however, board partners are completely left out in the cold, which unfortunately closes the circle at this point. OEM all well and good, but without customers this business just doesn’t work. It is logical that an AIB then simply packages the already produced units in its own finished PCs, but real market penetration works differently. In this context, I also wonder what might have driven ASRock to give up its status as an exclusive AMD AIB. The fact that there was already a fight between the two partners back then, when it came to protecting the other AMD partners and their markets, was exclusively reported from me in some news and an actually “forbidden” test of the first ASRock graphics card. Whether ASRock was dissatisfied or decided out of other interests, I couldn’t find out yet. But it’s kind of spicy.

The news behind the news: At least one of the big board partners has even stopped the production of Intel cards completely (“due to quality concerns“), as I could find out yesterday and today. Which brings us back to pulling the symbolic plug. If this proves to be true across the board and continues even further, Intel will have a real problem and would have to live off its own, self-produced reference cards for the time being.

But that would stand in the way of widespread use and customer acceptance. Other board partners have at least already completely capped their marketing activities, and it does not currently look as if there will be any real launch offensives from the board partners in the time window I mentioned between August 5, 2022 and September 29, 2022. What will really arrive on the market (as retail) will be seen in the next few weeks. From the customer’s point of view, I can only hope for the best, I alone lack faith.