Since there were explicit questions in the forum regarding the chip prices, I would like to publicly post an update in the article to save redundant discussions. For certain reasons, I cannot disclose all prices, but I can clarify that the statements of the retailer quoted in the news definitely do not correspond to reality. The basis for the orignal news and also this update are the statements of a total of three AIC, which also do not belong to a common group of companies, as well as NVIDIA itself.

The basis for the chip purchase of the board partners (AIC) is, as strange as it may sound, still the so-called MSRP of NVIDIA, so quasi the recommended retail price for the respective card. This price is the best indicator for whether the purchase price for the lot as such has also increased. As long as NVIDIA does not raise these prices, the AIC will buy the respective kit (consisting of GPU + memory) at the same price. The margin, which remains in each case with the AIC, lies only in approximately between 10 and 15%, also this is no secret (I wrote already several times about it), but it is generally not so well-known and lies in the end also clearly lower, than so some may think.

The general shortage of goods has made many other components more expensive, this is also no secret. Only here, too, the respective AIC will (have to) calculate hard as far as his margin is concerned, since he will of course also have to invoice and explain the additional costs to his customers. Only it is definitely not so that one can simply use NVIDIA and the LHR kits as an argument here, like the dealer from my news, because it is definitely wrong. Especially since many of the currently still delivered cards are not LHR cards at all. However, there are already first LHR models in circulation, since especially at the end of last week not small amounts of cards have also reached Germany.

What of course plays into the dealers’ hands is the fact that NVIDIA not only requires the special LHR labeling on the boxes for better transparency, but that these LHR cards also almost always have different item or order numbers. This means that, also from a legal point of view, it is no longer the same product, but only a comparable one. We know this from certain markets, where they advertise that they will refund the difference if you get the same product cheaper elsewhere. Tricky, with articles created especially for the buyer.

So if the retailer claims that NVIDIA has raised the prices for the (LHR) chips, then this is definitely not true. This has been confirmed to me personally by three major AICs from Asia. The dealer would also have been free to contact NVIDIA himself in this case, which I did. I am sure that NVIDIA would not let any AIC get away with using such arguments to justify their own, now perhaps higher prices. This is the kind of thing that really causes trouble. Mostly, the opposite is the case and NVIDIA has even supported board partners with Turing with a cash back campaign, just to “pacify” the market again.

The example presented today by Digitec from Switzerland is purely exemplary, but nevertheless so cheeky that I would like to present it and also comment on parts of it. We all know that the market situation for graphics cards has changed a lot due to many circumstances and can continue to change daily. Whoever as a retailer has already taken an infinite number of pre-orders at the launch, is actually to blame. Well, you can of course promise your bank great sales, but there is always a certain risk involved. So far the launch prices were almost always higher than the street prices after several weeks or months. Only this time just not and it might have gambled away so some traders with it grandiosely now try to correct this still. And at the expense of the customers. 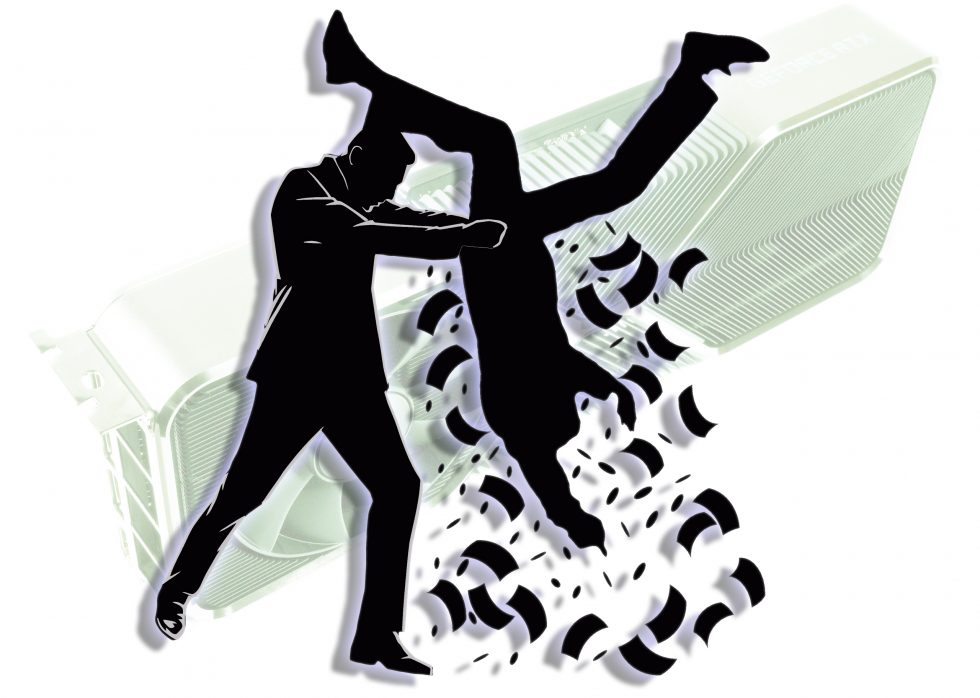 Now one must remain also fair and state that there is in Germany for example no legal obligation of the dealer to supply these orders also, as long as there is no explicit confirmation of order or was already paid in advance, but at the most a moral one. And a dealer can do without them with a clear conscience, because you can’t nail him down on that. So it is annoying in any case and as a customer you will have to think very hard about the extent to which you trust such a dealer for other things in the future (or maybe better not).

I know customers who have ordered online from a large German retailer – albeit staggered several times over months – and are currently pleased with the last orders that have already been processed, while the first ones are still open since the launch. It is therefore not processed according to the time of receipt of the order, but according to the agreed price. Always hoping to get rid of the old burdens automatically in this way at some point. But back to the retailer from Switzerland, who supposedly cleverly presents the prices on his homepage and passes the buck to the manufacturers or NVIDIA, because the core statement is definitely not true.

Well, that’s how it goes, of course, and there will certainly be quite a few customers who will now perhaps even grudgingly show solidarity with the retailer and ultimately accept the whole thing and dutifully cancel. The graphics cards had already become more expensive before and the LHR chips supplied as a bundle together with the RAM to the board partners were not made even more expensive. It’s even the case that some of these cards ended up being passed on to the distribution at a lower price, because the factory again had to focus in part on the target group of gamers.

On inquiries to various board partners it was communicated that the cards with the deliberate LHR chips were not specially raised in price because of it, rather the opposite was the case, if at all enough LHR chips were delivered to the board partners! Here the Swiss dealer lies against his better knowledge and it reads almost like a novel about his homeland, where the grocer is always the good guy and one should please show solidarity with him, because everyone is in the same boat. Except that’s not true…

I also find the current situation completely unsatisfactory and would like to see more customer-friendly prices. But despite all the justified emotions, one must also remain realistic and not distort the overall picture with such comments. It’s all annoying, as are many other things and prices, but here the customer is simply lied to for the sake of maximizing profits. Because one may also ask the justified counter-question: Would the dealer have cancelled the orders if the prices had collapsed? I don’t think so, do you? Stupidly run, so eyes on and not always believe everything!