I admit, the title sounds a bit martial, but you have to let it all roll off your tongue. Because all the proprietary sensors that EVGA places and evaluates with the now third ICX generation are not only technically outdated by now, but also so inaccurate that you really have to question the sense of the whole thing. Thereby the first steps in 2017 were really very promising and especially necessary , because there were hardly any monitoring possibilities of certain components and of course you could sell it all very promotionally effective. But time marches on and therein lies the problem. But first, let’s start in the now…. 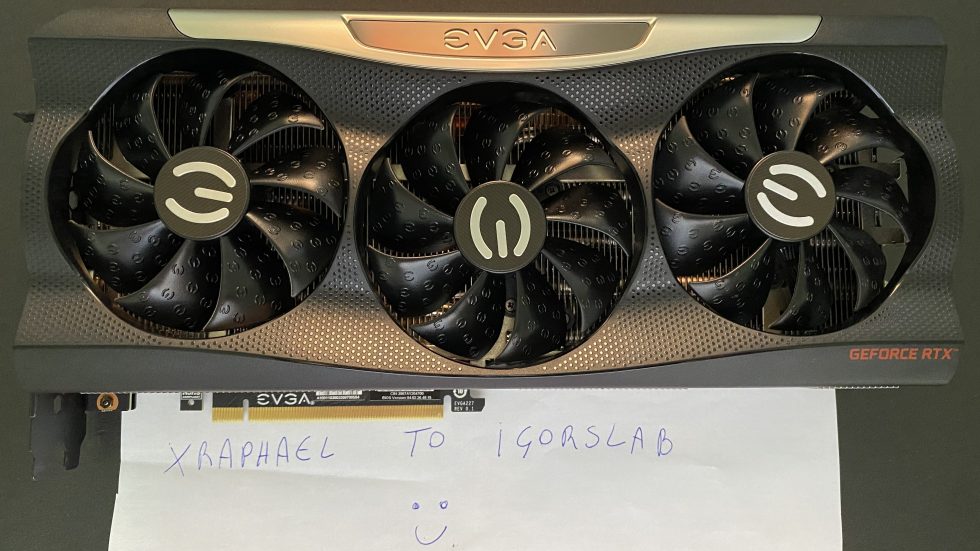 Of course, it’s understandable that EVGA won’t send me any of the potentially affected cards as test samples, but that’s what the community and loyal readers around the globe are for. Information and retests can of course be delayed in this way, but they cannot be ruled out either. In this case, my thanks even go to Brazil (!), because the new findings are quite interesting. It’s also a good thing that HWInfo64 can now also capture the ICX “sensors” and so the second thanks goes explicitly to Martin Malik, the creator behind this ingenious software. For those who still don’t know what it’s all about, let’s quickly refer to the previous news:

Reading tip: EVGA GeForce RTX 3080, RTX 3090 and (not only) New World – when design flaws cause graphics cards to run amok

In the meantime EVGA distributes a firmware for the affected cards with this ICX hardware so it was interesting to draw the usual before and after comparison first. And I had emphasized it often enough that the visible problems with the fan control and the utopian high revs are not readout errors of the tacho signal, but must have primarily other reasons. First, let’s look at a screenshot with HWInfo64 before the firmware update. We can of course ignore the fact that some values look different here because the upper limit of the variables used is also a smaller one. What is concerning, however, is what you can occasionally read out of the ICX registers under full load. The fan controller therefore reacts to completely absurd temperature values of the total of 9 sensors, although such values are technically impossible.

The highest flame temperature that can be measured at all under ideal conditions is about 6,000 °C, and the flame of a candle only manages 1,400 °C. With over 6,500 °C, what the system believes to have measured is therefore miles off the mark. The PWM number with 255% is probably due to the fact that here in the program only one byte is used for saving, but the fixed value could be much higher – also the one for the speeds. But you can also see that in this moment of madness, the limits of the GPU have been reached. New World can easily do that in the menus. 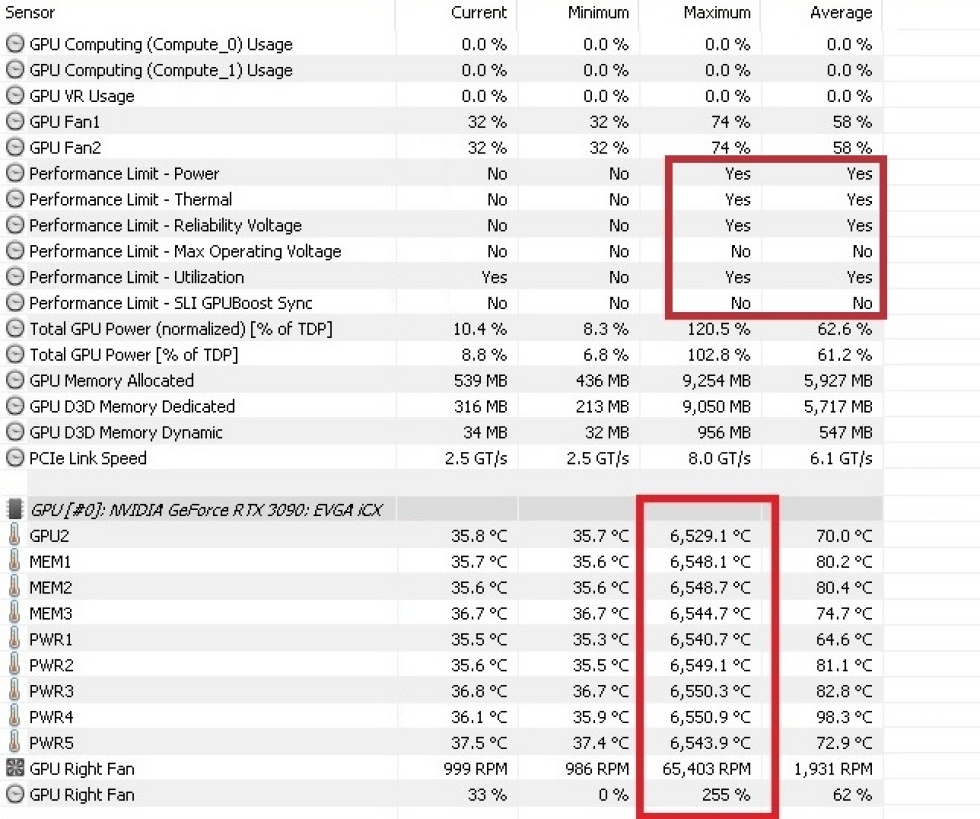 And then came the firmware update. At first glance, the values from GPU-Z or the MSI Afterburner looked a bit more normal, but the howling of the fans remained. Time enough to scan the ICX sensors again. Same load, same problem, but slightly different return values in the registers. Except that what you can read out now is still not real. Let’s take a look at the new measurement: 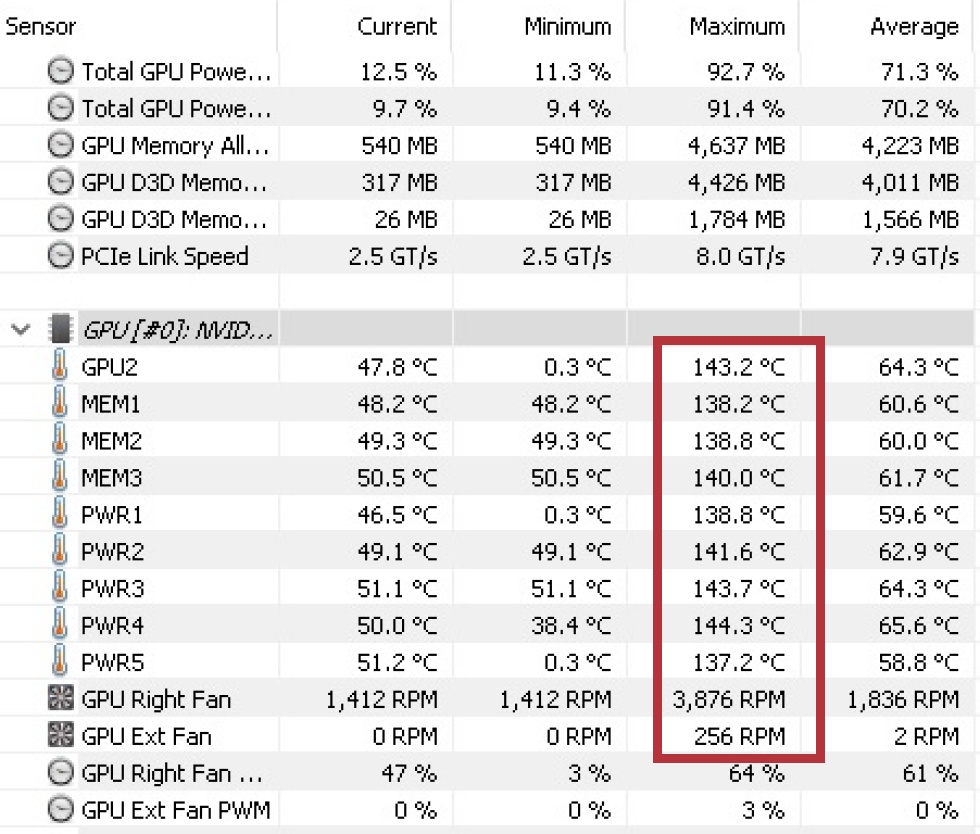 The course of the value determination shows nice spikes on almost all sensors, which cannot be explained in this form by normal readout errors.

The fact is that the new firmware is only cosmetic with regard to the return values, but it can’t solve the actual problem either. This is where EVGA is really challenged to either turn this off, or turn off the ICX module’s non-functioning controls and use NVIDIA’s much better values. Because there are now. I’ll show you how to do that on the next page and the one after that.

AMD Radeon RX 6600 XT with 8 lanes on PCIe 3.0 and without Resizeable BAR – Dream or nightmare for upgraders?
NVIDIA RTX A2000 – Ampere for professional use in low-profile format unveiled | SIGGRAPH 2021 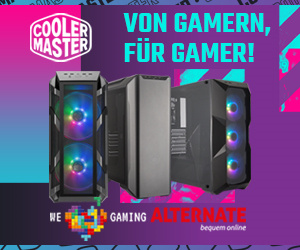