I had discussed it last week and also thoroughly tested how the Gigabyte GeForce RTX 3080 GAMING OC WATERFORCE WB can behave in the water cooling loop. The problems around the aluminum used and the rather rustic build quality including a holey anodizing were also and primarily based on the amount of complaints and hints received and a detailed test in the lab. Since I didn’t even get an answer from the responsible persons to my very detailed and elaborately compiled hints about another graphics card a few weeks ago, I had refrained from contacting them in advance this time. I don’t like to write into the blind if no one answers back anyway.

But secretly I had the hope that after the publication maybe still someone seeks the contact, because a few years ago it was actually no problem and there were more than a few improvements in the course of such conversations and exchanged laboratory data. So in the end, it’s almost a real win-win situation for both sides. However, I must also note that I absolutely disliked, for example, the way my friend Aris (Dr. Aristeidis Bitziopoulos) was dealt with in regards to his recent critique of inferior power supplies. You can’t handle an issue like that, and even if it’s just the new directive in dealing with the media, then I can’t think of anything else to say about it. Also a reason why I didn’t write directly to HQ.

But I digress. If you want to know what the aluminum story was about, you are welcome to read it again here:

A simple line of correction

However, a subsequently added paragraph on the product page for both revisions of this card shows me that they did read my article at Gigabyte. Since I had some idea of how the whole thing might be handled, there are of course screenshots of various websites and stores in addition to the archived PR material. On its own product page, the card presented itself like this until my article:

After publication, the right of modification was exercised (without explicit reference to it) and another line was added to the listing below. Small, hidden and also suitable to be quickly read over, but still: 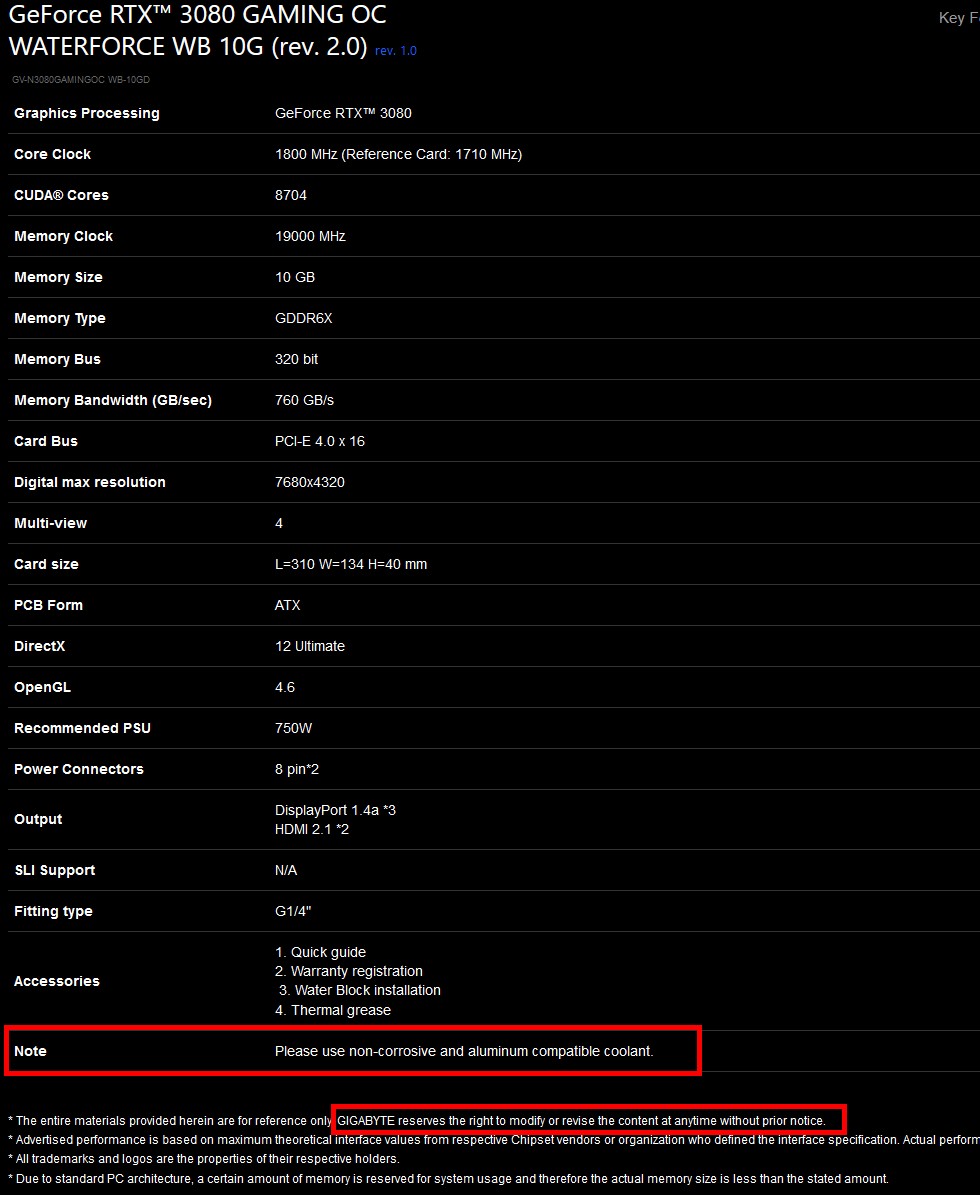 However, the technical problem does not lie in the coolant additives used, but in the general lack of information about the material of the heat sink, which even now many still consider to be copper. I therefore still consider the omission of information to be questionable and worthy of criticism. After all, even the best coolant must fail grandiosely if the surface treatment of the water block was done so shoddily. And there is no such thing as an “aluminum-compatible” coolant; the corrosion inhibitors are the same.

The only difference is that the proportion of glycol mixed with inhibitors must be significantly higher, and normal distilled water is completely ruled out. Why is it so difficult to explicitly refer to aluminum? Because then the customer could also plan his loop better and, for example, better go completely for aluminum right away, even for the radiators. As it is, however, it is still a blind flight through the impenetrable material jungle. By the way, honesty, transparency and detailed information are a costfree matter that could significantly lift the image of a company. Introspection is also part of that, by the way.