We recently already tested the Dominator Platinum RGB modules from Corsair, but not yet in the SKU with 6200 Mbps and Hynix M-Die ICs. Today, that is changing. Besides the usual tests, a teardown and overclocking, we also compare the modules with the mentioned Samsung B-Die based variant and RAM sticks from other manufacturers, but with identical ICs. So let’s dive in and see what one of the highest end variants of Corsairs DDR5 offerings can deliver. 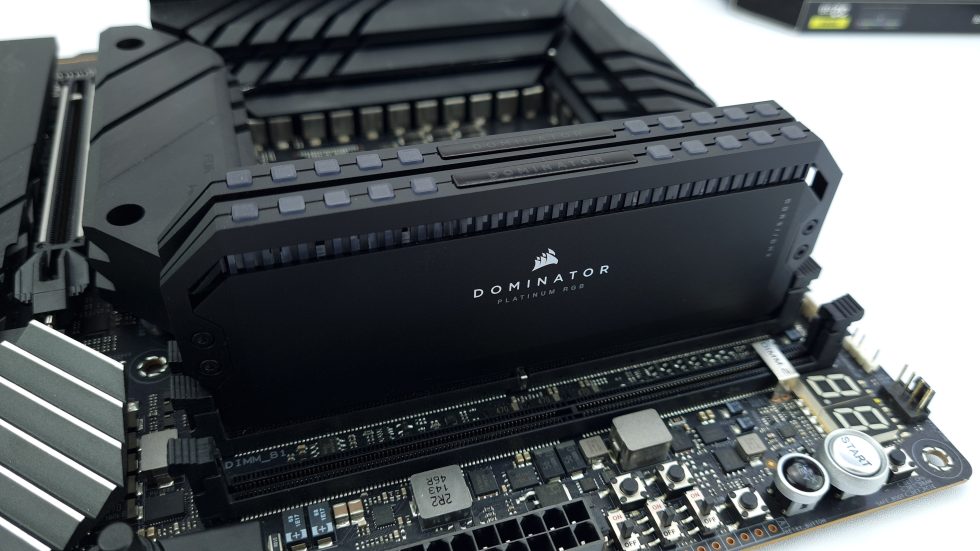 The outer dress and packaging of the modules does not differ between the Dominator Platinum RGB DDR5 series SKUs, except of course for the product number and the specifications stated. Thus, besides the capacity of 2x 16 GB, we find the speed specified as “6200MHz”, which is of course stored as Intel XMP 3.0 profile. The lighting is provided by the “CAPELLIX” RGB technology, of course compatible with Corsair’s iCUE software. 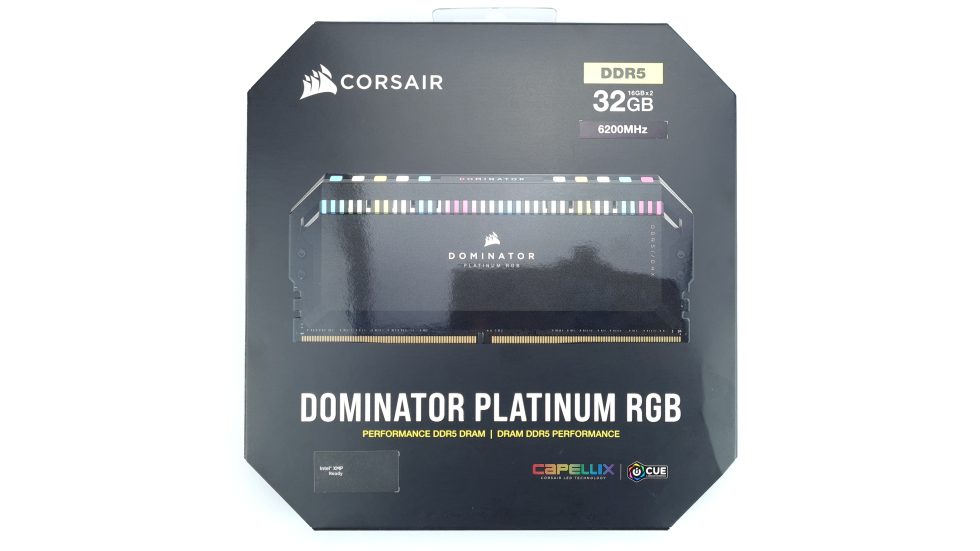 On the back, we find another hint about the “DHX” cooling technology of the heatspreader, which is supposed to keep even hot-headed DDR5 modules cool and thus stable. The kit’s product number is CMT32GX5M2X6200C36 and so here we already find the first hint at the tCL primary timing of 36, which is relatively nimble for DDR5 conditions with an effective latency of 11.6 ns. Through two viewing windows we can already see the stickers of the modules with further specs, but more about that in a moment. Unfortunately, the kit with this XMP profile is only available in black – I would have liked to show you the white heatspreaders as a contrast. 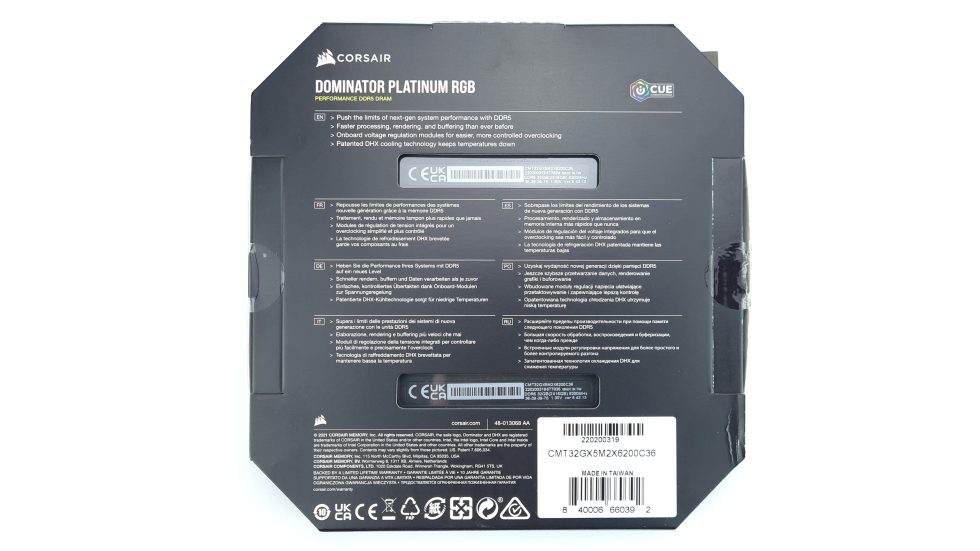 Freed from the outer carton, the modules are still held in carrier frames made of transparent plastic and foam. There is also a quick start guide and safety instructions in paper form. The modules themselves are simple in design, but at the same time convey a certain grandeur of the “Dominator” series. The black anodized heatsinks only feature a Corsair logo in the center and Dominator Platinum RGB lettering in white. A discreet, vertical “DDR5 // DHX” note can be found on the right edge. 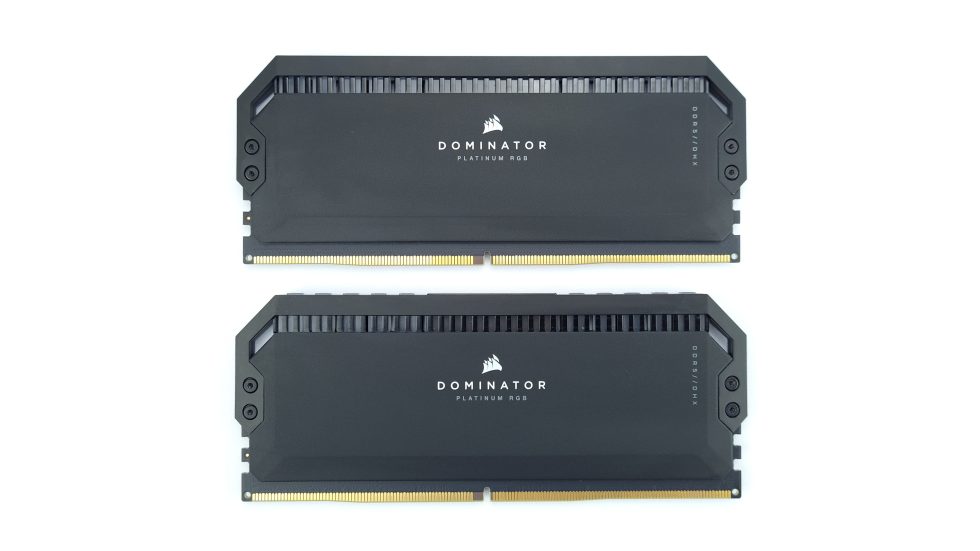 Between the two cooler halves and above the circuit board, the lighting element is placed behind a grille made of glossy black aluminum and is held in position by likewise glossy black frames, each fastened with two 1.5 mm Allen screws. Below the center lettering, there is a recess in the heatspreader where the sticker with the kit’s specifications is placed. In addition to the already mentioned product number, the serial number of each module, usually adjacent, the capacity and speed, as well as the timings can be found here. The “6200MHz” are operated at 36-39-39-76 with 1.30 V. Finally, we find Corsair’s RAM module version here, which can be used to infer the installed components. Here we have ver 5.43.13, whereby the major version 5 has already pointed to Hynix memory components even with DDR4. 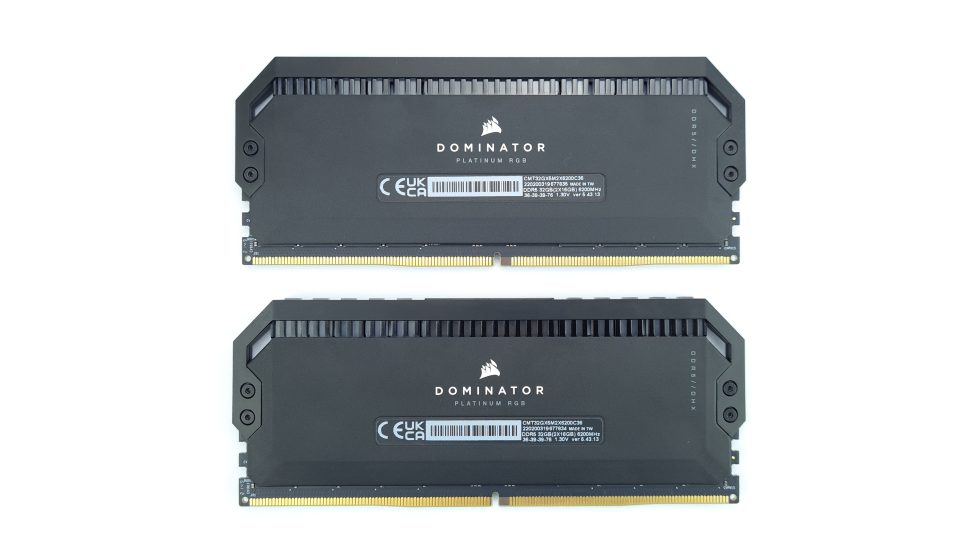 From above, you can clearly see the two halves of the frame that hold the plastic lighting element with its 10 light points in position. A black glossy “Dominator” negative print is found in the center, so the letters are then also illuminated accordingly from behind. 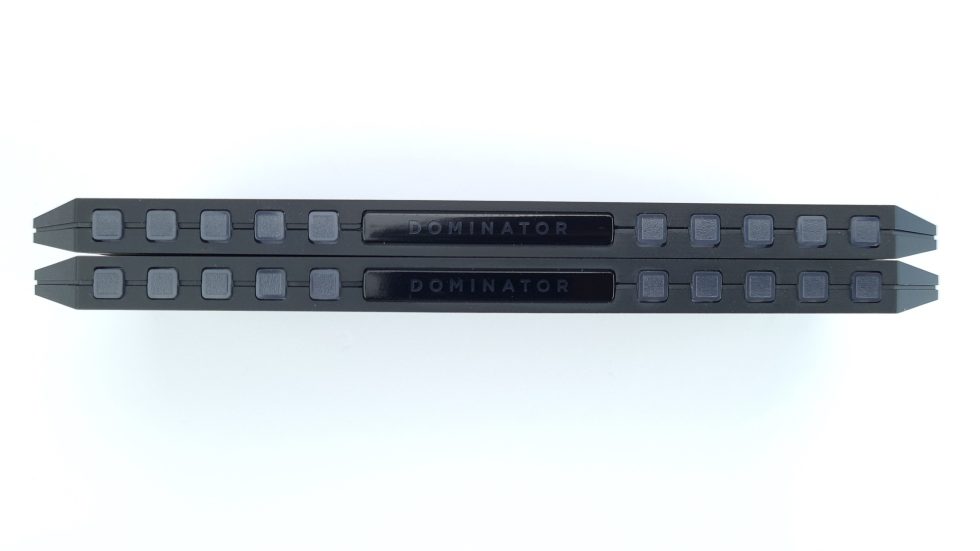 From below, you can already see that these are single-sided modules, as you would expect from DDR5 modules with their standard memory density of 16 Gbit per chip. The other side of the board is filled accordingly with black foam towards the cooler. 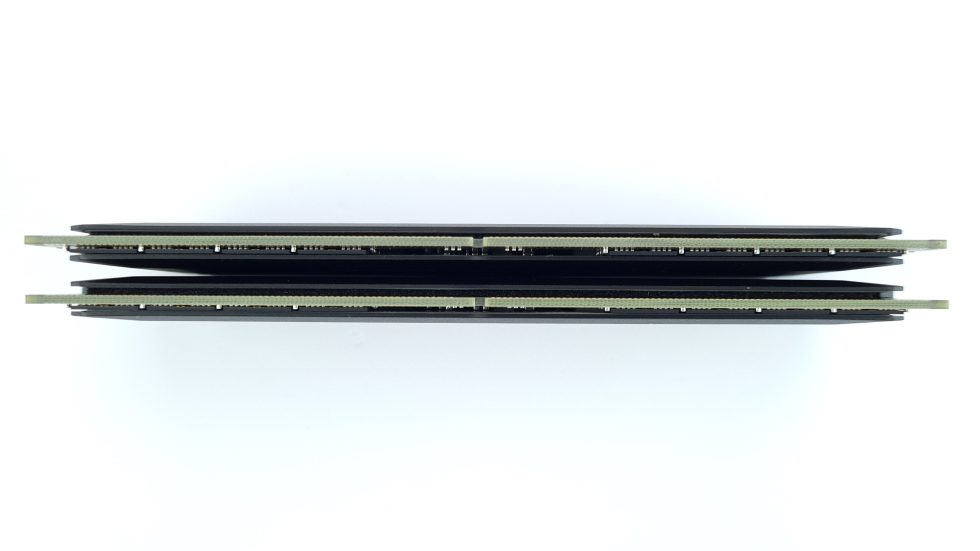 From the side of the DIMM caps, you can also clearly see the two halves of the frame and the heatsink and how they are held together as a sandwich by the screws. The conical shape towards the edge or lower edge of the modules rounds off the design nicely. 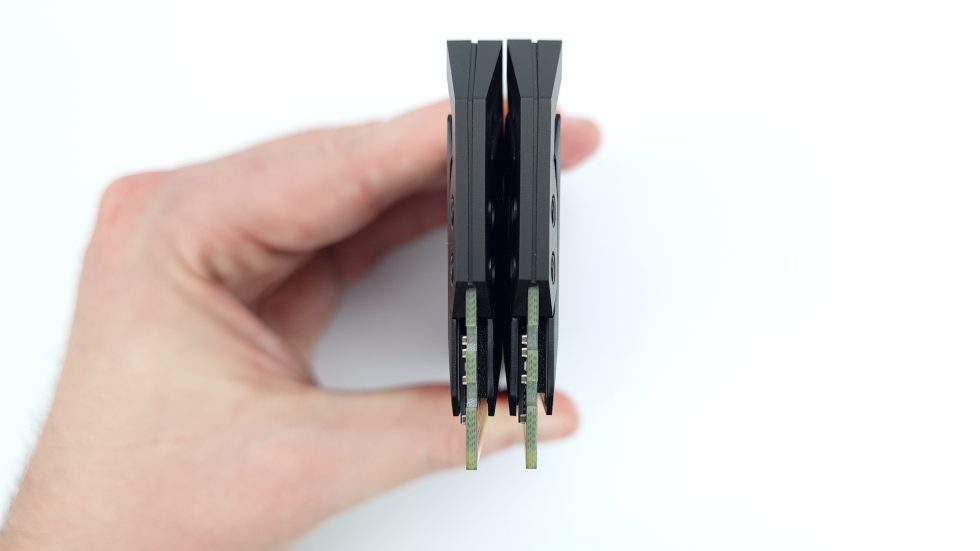