Today we too start with the kit reviews for DDR5 on the new Alder Lake platform. At the launch at the beginning of November, the availability of the new memory kits was more than sparse, but since then one or the other DDR5 memory module has actually shown up as “in stock” in many online shops. Perfect timing to take a closer look at the features of the different kits and for which use case the upgrade from the previous DDR4 standard is really worthwhile, or maybe not. 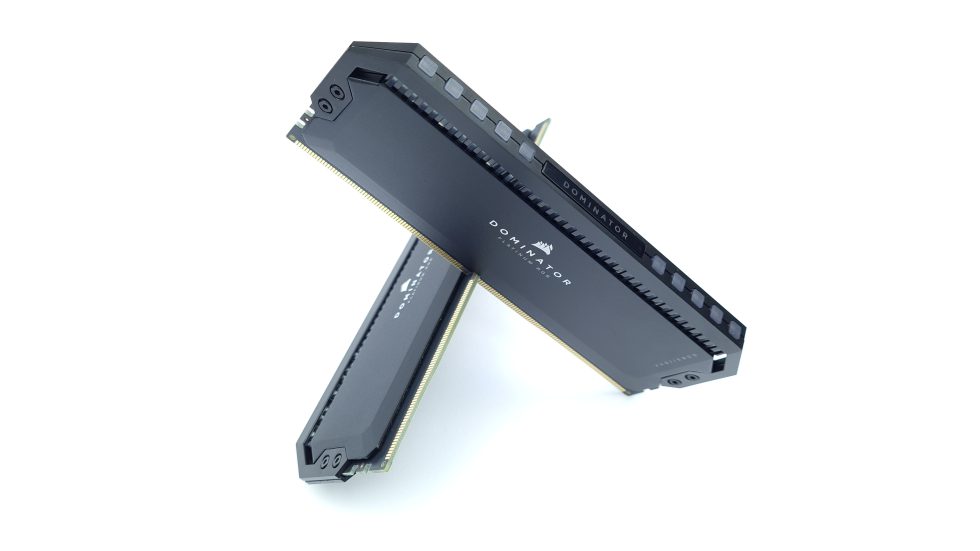 In today’s review we’re looking at a Corsair Dominator Platinum RGB kit, consisting of two 16 GB modules with an XMP 3.0 profile of DDR5-5600 36-36-36-76 at 1.25 V. The Dominator product line has been around for a long time and has been refreshed in design and relaunched for the new memory standard. The available SKUs range from the JEDEC-standard “4800 MHz C40” to the current flagship model with “6400 MHz C38”. Accordingly, the components and inner workings of the kits can vary, only the outer dress with black aluminum and RGB lighting remains the same.

The kit in today’s test with the aforementioned XMP profile has the product number CMT32GX5M2X5600C36 and is thus positioned in the midfield of the product portfolio. Corsair could not confirm which memory ICs this SKU uses. But since Micron’s current 16 GBit Rev A memory chips already reach their limits at 5600 Mbps and the manufacturers also have to save reserves for binning, Samsung or Hynix memory chips will probably be used here. But more about that in detail later. Now let’s take a look at the packaging and appearance of the modules first. 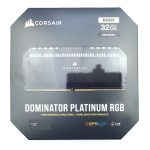 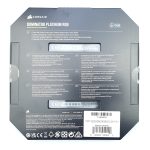 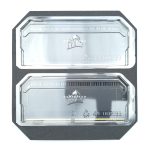 Typical for Corsair, the outer box is black with neon-yellow accents. In addition to the capacity and speed of the kit, the “Capellix Corsair LED Technology” and the compatibility with the Corsair “iCUE” software are also advertised. In addition, the RAM kit is “Intel XMP Ready”, not “Intel XMP Certified”, so it was not directly validated by Intel itself, but this should just be mentioned for completeness. On the back side we find some more interesting information like the now standardized power supply for DDR5 via a “PMIC” (Power Management Integrated Circuit) on the modules themselves and the “patented DHX cooling solution”, which is supposed to provide the lowest possible temperatures. Inside is a frame made of foam, which in turn houses the two modules, each in a single plastic carrier. 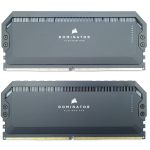 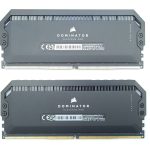 The modules themselves consist of a black circuit board with a heatsink also black, made of anodized aluminum. On one side, there is only the Corsair logo and product name printed in the middle with white lettering, while in the upper right corner there is a small “DDR5 // DHX” inscription vertically.

These letterings can also be found on the back, whereby the sticker with the characteristics of the memory kit is also attached here in a shallow recess. Here we find the product number and XMP specifications as well as the version number, which typically reveals the ICs used by Corsair. But what “ver 4.43.02” means in this case is not known at this point. The community will have to do some detective work for a few more weeks and months, but we will already provide a few hints today. 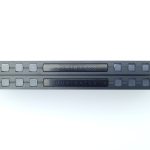 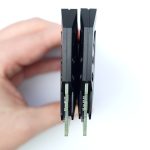 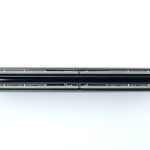 Viewed from above, the two halves of the cooler can be seen. Here, an attached frame half grips around each of the 10 RGB LED light points of the modules and the central “Dominator” lettering with black negative print. The fit of the frames around the light elements is not quite perfect, but hardly bothers at first or when the lights are turned on. From the side the frame halves attached with screws can be seen even better and from below the one-sided layout of the module is visible. Since DDR5 is initially only produced in 16 Gbit-dense memory chips, this also makes sense, since a 16 GByte module can be produced with 8 memory chips.