If you want to (or have to) separate, then there are two ways to announce this: one emotionless and one where you once again seek the big stage. EVGA chose, what a coincidence, the time shortly before NVIDIA’s in-house exhibition GTC (after that, the whole thing would have gone down a bit) to drop the bombshell that wasn’t really a bombshell anymore. This media uprising and aftermath is really just the long overdue flashback after a smoldering fire that lasted for months and in which the green fuse was even shorter than Jensen’s wood screws in his old Fermi mock up.

I thought long and hard about whether to write something about it (and about what), because I also have my own private opinion about the circumstances in general and EVGA’s appearance in particular, which has been formed in the last few years also due to my own experiences. That’s why I also used the weekend to chat or talk on the phone with one or the other competitor and colleague, in addition to all the benchmarks. Because the way in which and where the reason is now located and the way in which a suitable culprit is presented at the same time has caused quite a stir among many people. It’s not about defending NVIDIA, but using Jensen as the ideal object of hatred is a bit short-sighted and only distracts from one’s own failures. But you have to throw something down the throat of the investors and brand-affine customers. And that’s where the green leather jacket Hulk is best suited. 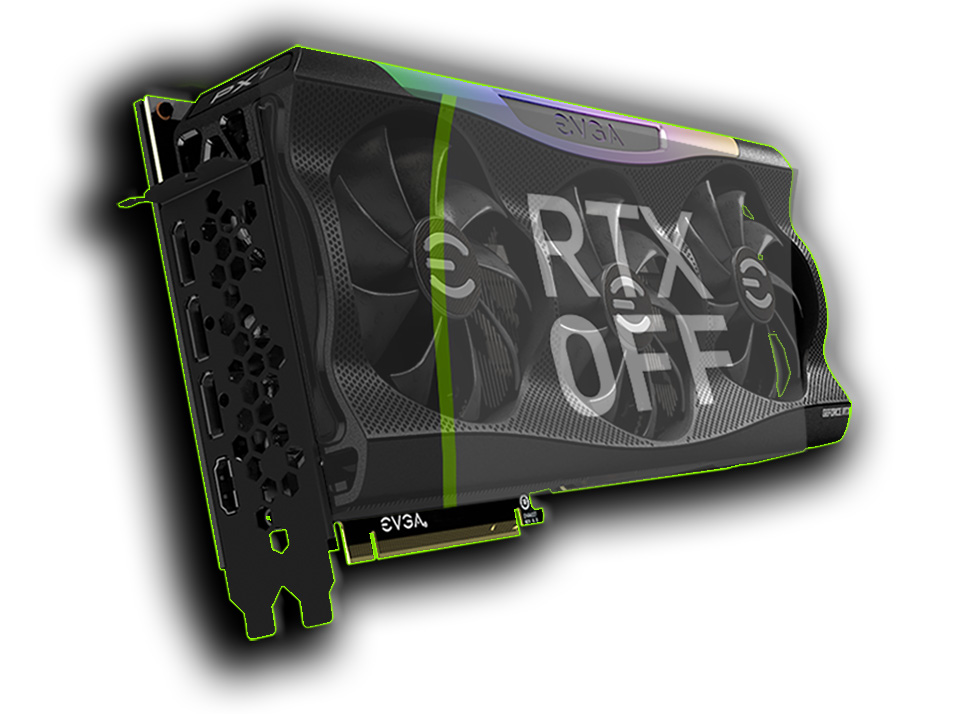 My colleague Stephen Burke from Gamersnexus has actually already said most of it, I don’t need to dissect and regurgitate that again. I’ll just post the short quote from EVGA CEO Andrew Han again now before I get my own thoughts on it.

We are not going to be on Jensen’s lap on stage, so I don’t want people to speculate what’s going on….EVGA has decided to nat carry the next gen. (Andrew Han, CEO)

The business model: Let others do it

In principle, EVGA is nothing more than a brand without its own production. Of course, the company has its own R&D department for the engineering, but the level of creativity is not particularly high here either, if you only have to rely on the abilities of third parties in the end, be it the circuit boards, the coolers and the complete production as the final implementation. Unfortunately, having it done instead of doing it yourself costs money. And while this very concept mitigates risk and effort in manufacturing, it also reduces the margin that can still be achieved with such a highly complex product. Therefore, I asked several competitors and found out that the currently achievable margins in the worst case (like EVGA) are still 5%, and up to 10% for the do-it-yourself manufacturers, who can manage an own production.

This is not less than in 2021 or 2020, only this year merchandise sales have dropped significantly due to orders staying away and a change in demand. However, that one produces at a loss because of NVIDIA’s money-grubbing claws, as EVGA colports, is considered by many to be an urban legend. These are rather homemade problems with faulty designs and a RMA rate that was beyond good and evil. I don’t want to quote myself again, but the disaster with Amazon’s New World and the scorched circuit boards was expensive, really expensive. To attach this to every card as a loss is definitely too short-sighted.

Let’s say they made 10x profit than normal business last year, if you are the boss, will you quit now or waste another 10 years just to make the same profit amount last year? (Competitor)

The business of brands is actually like the good old stock market business, because you should sell at the peak and best take what is still to be taken. If you have to buy almost all services at a high price, there is not much left in the graphics card business. A large manufacturer (not EVGA) easily produces around 200,000 graphics cards per week, which puts the 5 to 10 percent in a different light. In the system gastronomy, business also only works via sheer mass, which is no different with graphics cards. However, EVGA lacks exactly this mass (which can also be seen as a buffer), which can cushion smaller outliers.

If you ask the competitors why they haven’t copied EVGA’s warranty, upgrade and exchange model as well, you actually only see grinning faces or shaking heads. Statements such as “economic suicide by default” are still the most polite thing to say. I wrote that the cards have become more and more complex and that the risk of failure has increased dramatically as a result. Therefore, the RMA processes do not become more favorable, on the contrary. Goodwill and generosity, as EVGA has made its trademark, must also be afforded and what was manageable 10 years ago can end in collapse any day today. House of cards and all. Here, EVGA simply lacks the critical mass to easily pull off something like this financially. Being the US market leader is all well and good, but how big is the DIY market there?

If it were profitable, we would have done it long ago (Competitor)

Peripherals and power supplies are much easier to keep track of and now offer much higher margins of up to 30 percent. Power supplies are just the new thermal paste and the run is still properly fueled by ATX 3.0. Speaking of power supplies, I remember how EVGA at the time (this was back in the Kepler days) made the sampling of graphics cards dependent on a positive review of the newly introduced power supplies. Back then, I was still writing for Tom’s Hardware and very stubbornly resisted the “reward for award” system. At that time, however, the “Just buy it!” philosophy did not yet exist there and one was still allowed to do such things as a reviewer.

As a result, I was then excluded from sampling for a few years. By the way, I’m still alive, which shows once again that you don’t have to go along with something like that if you don’t want to. I also don’t want to repeat how EVGA products later failed my tests and the engineering used my findings (pad mod, area increase on the cooling frame, RAM monitoring in the ICX design), but the PR kicked nasty in my direction. I never asked for money for my support, but would probably have been happy to receive a thank you now and then. By the way, this is exactly where you notice the difference between a US company like EVGA and a German medium-sized company. EVGA is extremely profit-oriented, and when things don’t go so well, they just part with a division. By the way, this is not reprehensible, but the explanations should then also be more honest.

The Green Light Program as a buzzkill

And what does NVIDIA have to do with it now? Yes, even the competitors are properly pissed off that they still don’t know NVIDIA’s prices and don’t know at which dumping or scalper rate Master Jensen will beat his new Ada into the market as a playmate (depending). That’s why you won’t see so many completely new designs, and what I had already called “Playground” in the GeForce RTX 3090 Ti will mostly be continued. This is then economic prudence and not even stupid. EVGA could have thought of that as well.

However, you also have to know that NVIDIA strives for total control and also mercilessly enforces these policies. There isn’t much room left for technical gimmicks á la EVGA’s special models and both sides have clashed hard not only once. EVGA always explores how far you can go and NVIDIA then intervenes to correct the situation. I have already explained this in detail in the article linked above and I don’t want to repeat myself. However, it is also a fact that NVIDIA only provides replacements if you follow “NVIDIA’s rules”. You can approve of this or not, but it leads (at least in theory) to more durable products.

Things like EVGA’s Kingpin models break those rules, but that’s where they’ve found a clever loophole because it’s effectively declared a mod. Galax does the same with the HoF series. Various overclockers give their face for it (for good money) and it is not a consumer product. That’s why you don’t get a real HoF including unlimited OC tool as a normal customer, but only the “roadworthy” version under the same name. The rest is then expensive cannon fodder for the LN2 artillery. Such marketing escapades also cost money, of course, even if they can boost the company’s image. The good Kingpin must now look for another place in the money rainforest, but the choice is rather manageable there.

I didn’t really want to go that far, but once you’re in such a nice writing flow, the shore you’re aiming for gets further and further away. In order to come to some kind of conclusion at the end, I’ll make it simple for myself, because I can perhaps also question some things differently: It is certainly not a loss for me (and many others), because it became apparent that the model practiced for years would no longer have been financially viable in this way. And before one admits this publicly and meekly, one looks for the last big performance and says goodbye to the shocked audience with a big bang. I only hope that all previous customers will still be dealt with gallantly and treated fairly. Then it will surely work out with the power supplies, housings and other stuff.

After all, I haven’t heard from any other small Jensen exclusive customers that they now have to throw in the towel for the reasons I mentioned. But they can probably calculate better and also produce themselves. It is a pity about a colorful facet on the graphics card market, which I will also miss, but the customer will get over it.

Microsoft Security Patch for Windows 11 with a PIN disaster in the offline trap
RED BIOS EDITOR and MorePowerTool for Polaris, Navi and Big Navi – MPT 1.3.17