The Trident Z RGB and Neo series from G.SKILL have been around almost as long as DDR4. However, for the new Ryzen 5000 CPUs, G.SKILL has refreshed their SKUs and added new XMP variants specifically optimized for Ryzen. Today we’re looking at the top of the line model of the new variants, a 2x 16GB kit in dual-rank configuration, with Samsung 8 Gbit B-Die memory chips and impressive RBG color wonder on top.

Briefly about the concept: For several generations AMD has been using a chiplet architecture for its CPUs, where the silicon for CPU cores and cache (Compute Cluster Die, CCD) is manufactured separately from the memory controller and the rest of the input-output (IO-Die). The chips are combined depending on SKU and “glued” together on a package. The data connections between the CCDs and the IO die, the “Infinity Fabric” (IF), and its clock (FCLK) thus has a major impact on the performance of the CPU. Since the clock of the memory controller (UCLK) and the main memory (MCLK) are also controlled by this same IO die, these three clocks should be operated simultaneously as fast as possible and synchronously with each other in order to keep the data exchange optimal and thus the performance as high as possible. 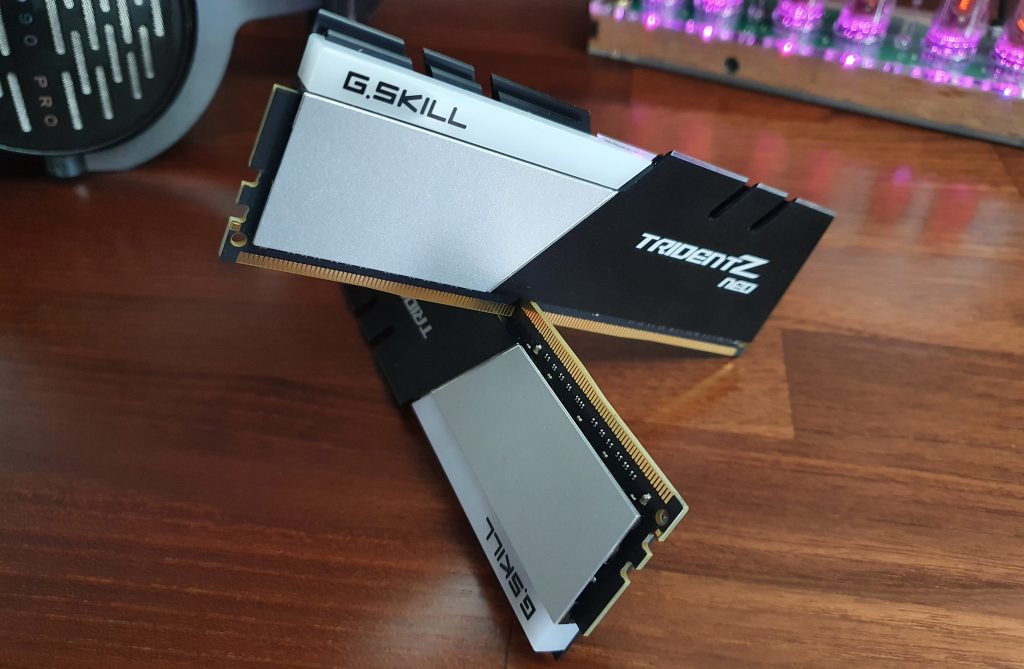 To get the most out of a current Ryzen CPU, you should therefore install RAM that can keep up with the maximum possible FCLK of the CPU and at the same time keep the latencies and thus access times low. And exactly for this G.SKILL has designed the new Trident Z Neo SKU with DDR4-3800 and XMP timings of 14-16-16-36 at 1.5V. The 1900MHz clock is in line with the FCLK maximum of most current Ryzen CPUs, and the timings are lower than almost other DDR4 kits on the market, thanks to Samsung’s well-known high-performance memory in the form of the 8Gbit B-Die. The icing on the cake is the double-sided assembly of the modules and thus another theoretical performance boost through dual-rank operation. We’ll now take a look at whether these fabulous specifications can also prove themselves in practice. First, however, the usual a brief look at packaging and optics. On the front of the outer box we see the modules on the one hand through a small viewing window and on the other hand in the illustrated form. Besides the name of the product series, G.SKILL advertises the AMD Ryzen-specific conception and the European Hardware Award 2020. 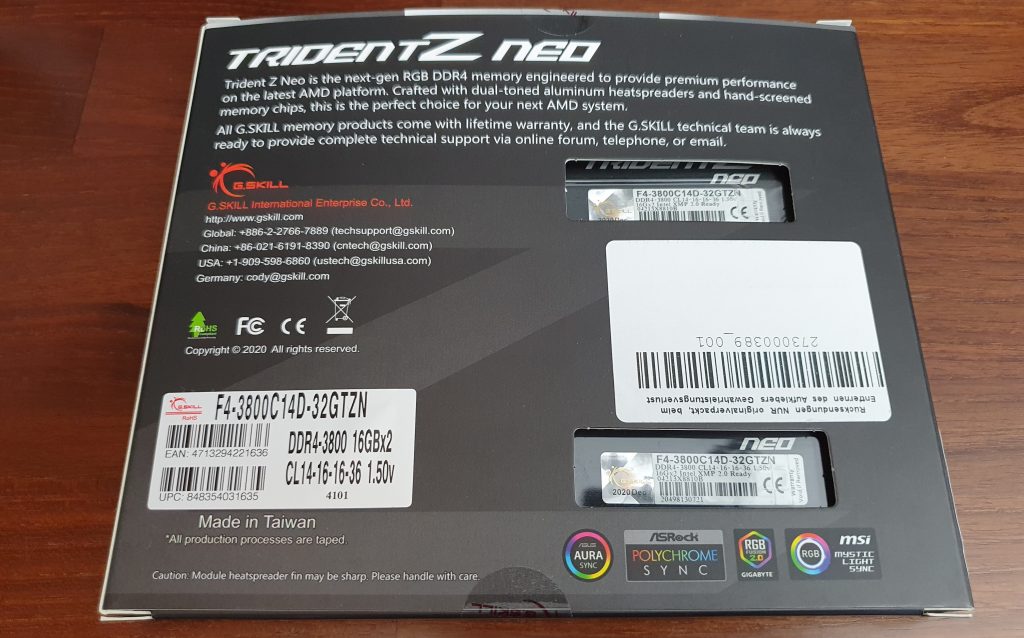 On the back we find a short text that once again focuses on the suitability for AMD Ryzen systems and lists G.SKILL’s lifetime warranty for RAM modules, commendable. Below on the left side you can find the exact name of the product variant or SKU: F4-3800C14D-32GTZN, as well as the capacity, number and XMP profiles of the modules: 2x 16GB DDR4-3800 CL14-16-16-36 1.50V. Typical for G.SKILL we can see the stickers on the modules through two additional windows, which also tell us their serial number and manufacturing time. Useful, also for a possible resale. Finally, the compatibility with the RGB software of all common motherboard manufacturers is pointed out at the bottom. 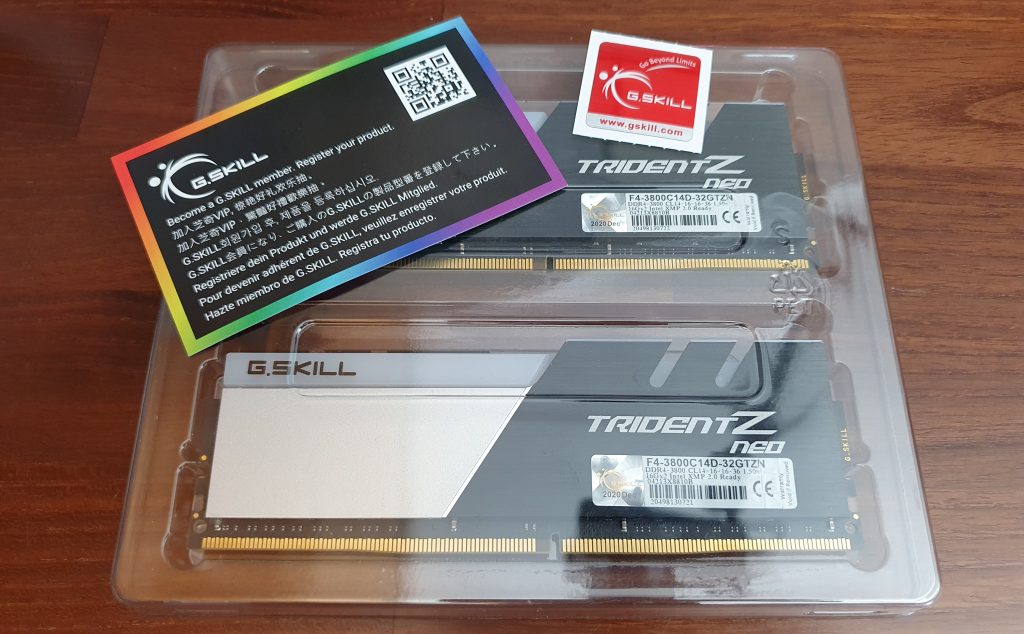 Inside we find the modules in a transparent plastic carrier, a G.SKILL case sticker, as well as a small card with a reminder to register your product on the manufacturer’s website. 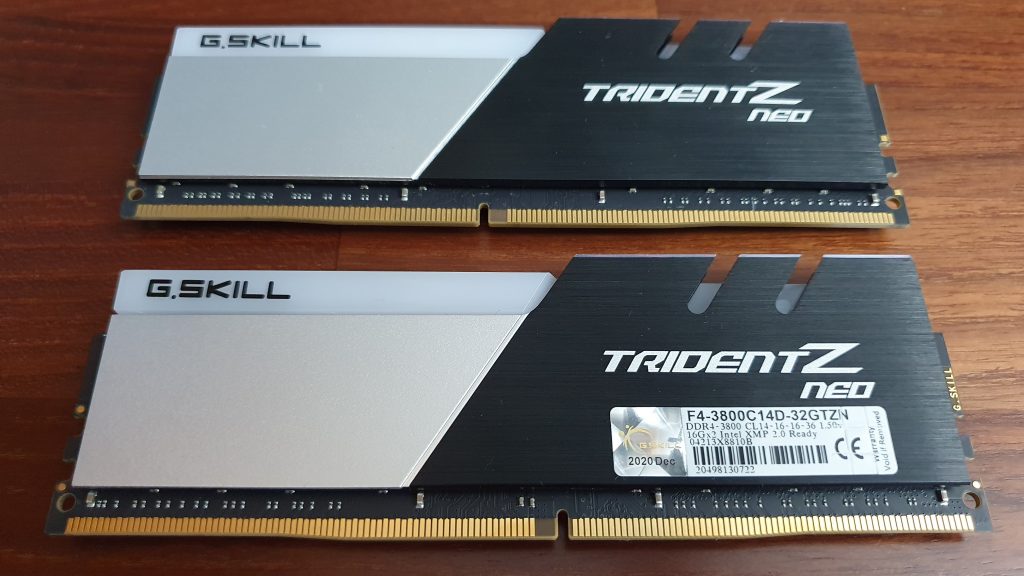 The aluminum heatspreaders are the first thing you notice when you take them out of the box. Both sides are identical and only differ by the sticker with the serial number. While the surface on the right side is brushed and painted black, decorated with white TridentZ Neo lettering, the left side is anodized in silver. Towards the top there are cooling fins on the right side, while on the left side the aluminium is a bit shorter and instead a white acrylic element with black G.SKILL lettering is set on top, which is used to distribute the RGB illumination – lightspreader so to speak. 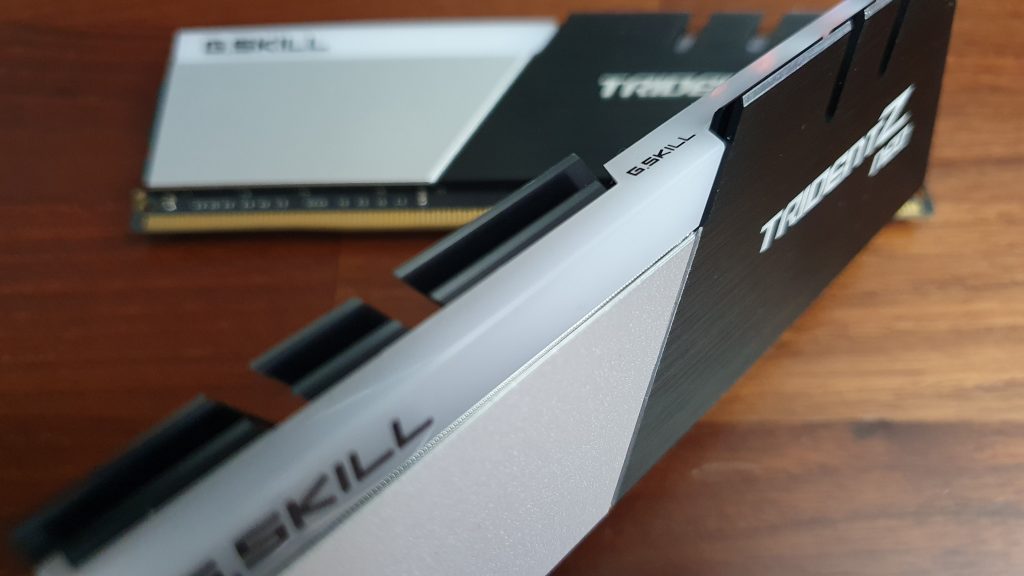 The left and upper edges of the black, brushed element are milled at an angle so that the bare aluminium is visible as a contrast. The transitions between the two metal elements and the white acrylic are not seamless, but they are even and identical between the modules. So the German gap fetishist in me can’t complain either. The height of the heatspreader is 40mm from the top of the DIMM slot and the weight is about 70g per module, which is a considerable amount of heat-spreading aluminum.

With a look from below we can see the 10-layer PCB with its memory chips an almost symmetrical configuration of MLCC capacitors on both sides along the DIMM contacts. In the background, four of the LEDs that illuminate the white acrylic element from below can also be seen in the middle. 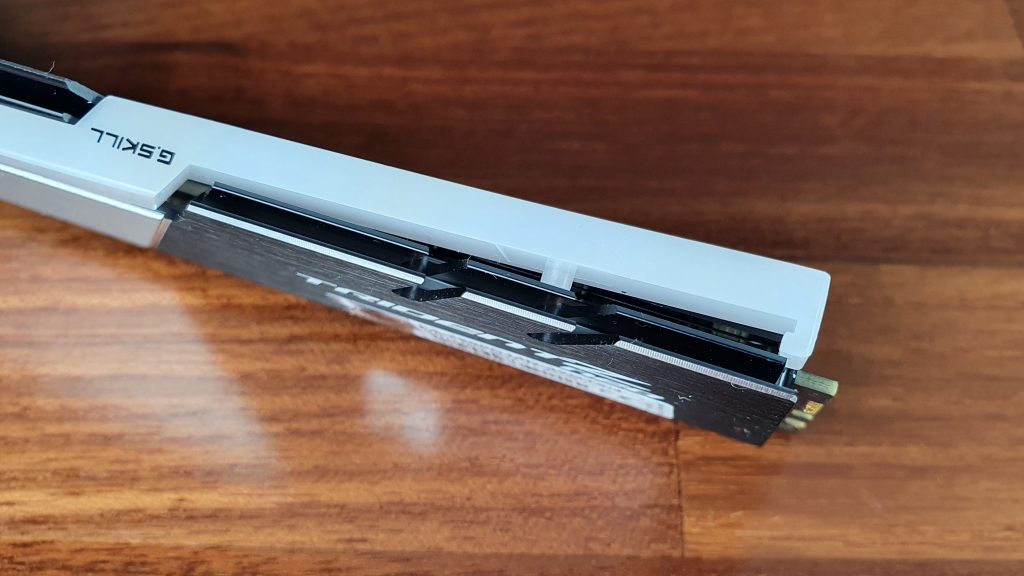 Today we also dare to take a look at the pcb of the RAM without heatspreader. Removing the latter is relatively simple. First, we need to use a plastic spatula or fingernail to pry the lightspreader out of the guide at one end of the heatspreader. 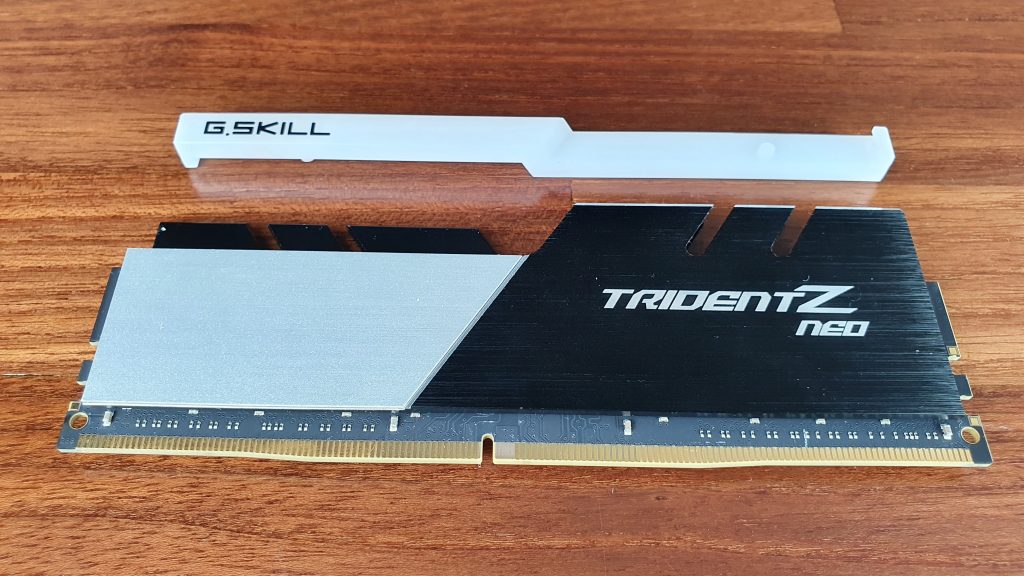 After that it can be easily removed and only the aluminum heatspreader on both sides remain. 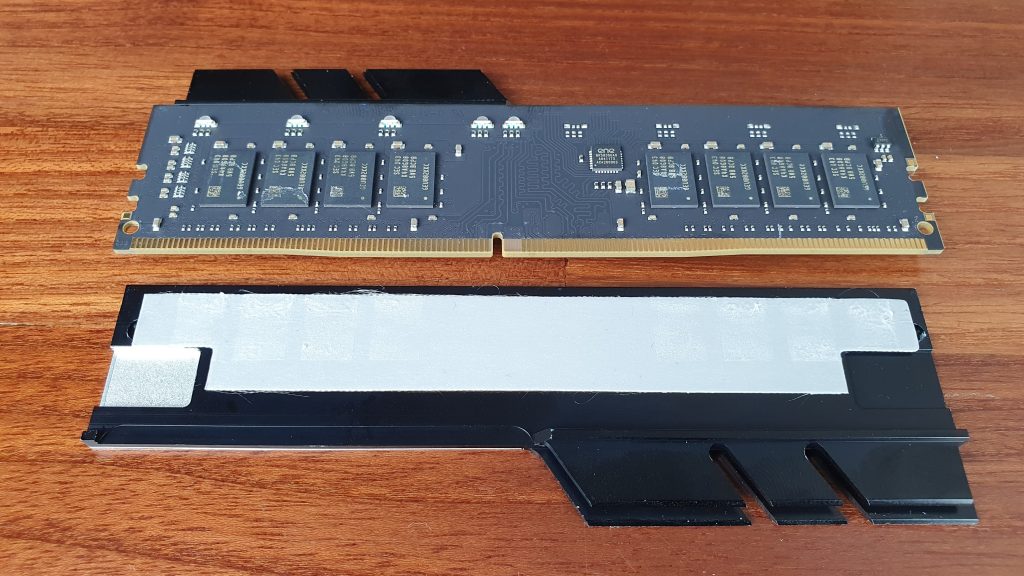 To loosen the heat conductive adhesive tape between the heatspreader and the ICs, heating with a hairdryer is recommended. Once brought to temperature, the heat is distributed throughout the aluminum body and the heatspreader can be released with little leverage.

At first glance, the two sides of the board appear identical, each with the 8 memory chips divided into 2 groups relatively far out and the 5 LEDs at the upper left edge. We can already identify the memory chips with their labels “SEC” (Samsung Electorics Corporation) and “5WB” (B-Die Stepping). At a second glance you can see the differences in the SMD components and the G.SKILL logo on the right of one side. The RGB controller is located on the PCB side without lettering, recognizable by the second largest package after the memory chips and the labeling “ene”.

Speaking of RGB, here is a short video demonstrating the lighting at system startup.

For all, without a webm compatible browser, there is of course a small picture gallery.

The aesthetics are familiar and unchanged from previous Trident Z RGB or Neo variants, but this is by no means a negative comment. The design of the heatspreader with the different surfaces is refined but discreet. The RGB illumination is powerful and thanks to the white acrylic element evenly distributed over the entire top of the modules. It doesn’t always have to be the flashiest LEDs and the most sensational heatspreader shapes and this concept has proven itself, so no reason for G.SKILL to reinvent the wheel.

Finally, of course, a look at the SPD is not to be missed. Besides the known info like product number and capacity we also find the definite confirmation that each module consists of 2 ranks. As PCB reference Samsung’s B1 layout is used, accordingly extended by 2 layers and RGB. The 8 Gbit B-Die ICs are also listed here again, along with their part number and the binned XMP specification. 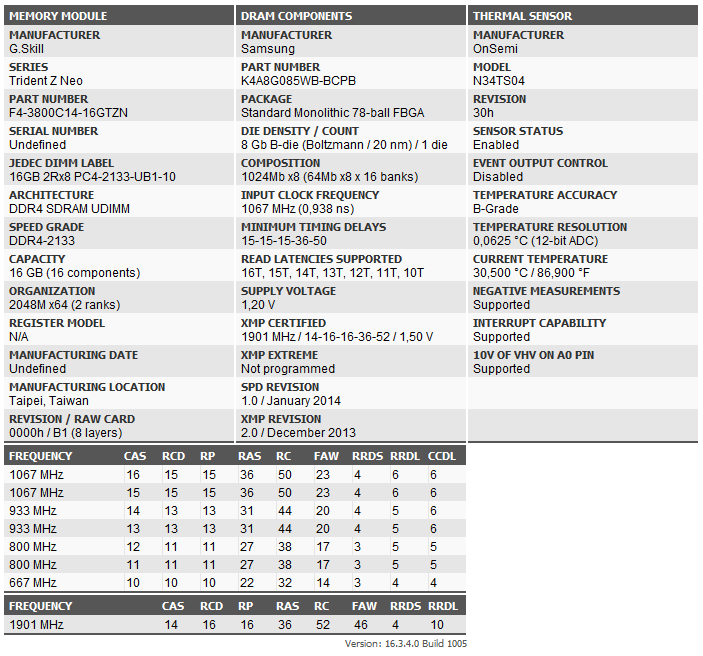 Unusually, these DIMMs also have a third column in the Thaiphoon Burner, because the modules have a temperature sensor, more precisely an N34TS04 from OnSemi. This is almost a unique selling point of G.SKILL modules and will prove to be extremely useful later on when overclocking. Finally we find a table with the JEDEC timings and the extended XMP specification: CAS 14, RCD 16, RP 16, RAS 36, RC 52, FAW 46, RRDS 4 and RRDL 10. The FAW timing is unusually high and should usually be RRDS x 4. But since most mainboards only take over the 4 primary timings anyway, this shouldn’t matter.

What’s that chirping? Pitfalls with an external USB DAC and an Oehlbach PureClock as a possible solution | Audio
A quiet pump for Gigabytes GTX 980 Ti Xtreme Gaming Waterforce | Retro 5 years ago