What happens when Schubert’s trout goes down the Oehlbach acoustically grandiose and takes the invested 20 Euros right along with it? That’s exactly what I thought when I spontaneously ordered an Oehlbach PureClock to solve my nasty chirp problem and wasn’t really sure whether such a passive stick was pure snake oil or a passable solution. And yes, I kind of have to apologize to the Oehlbach company, at least for this part, even though I tend to be skeptical of other products. The stick didn’t eliminate the problem completely (I don’t think that’s possible), but it at least shifted it into the background so that I can live with it very well. But first things first… 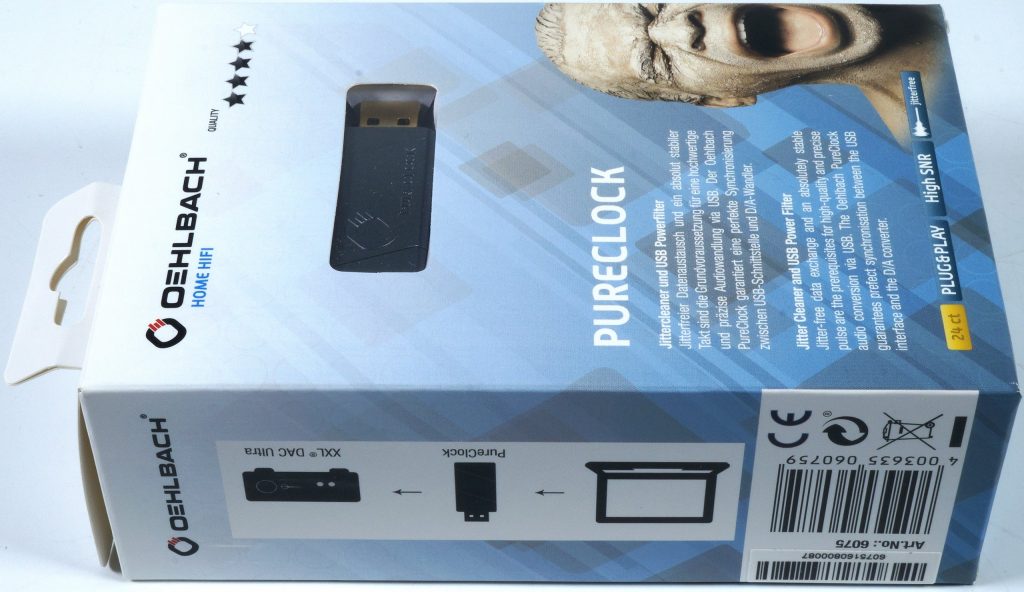 We know that especially high-resolution digital audio signals need a precise and stable clock as well as a clean and interference-free 5V power supply as a basis for high-quality D/A conversion in addition to good signal transmission. In addition, motherboards and their components (graphics card, SSD, hard disk, CPU) produce unpleasant electromagnetic interference and unwanted signal noise. Flippant sayings like “You can hear what you see” are unfortunately the normal reality and by no means an exception.

The dreaded clock jitter is also called “jitter” and also the high frequency noise signals quickly find their way via the USB cable to the external DAC. It can be as great and expensive as it wants, almost no device has a clean galvanic ground separation and really effective filters. This is exactly where the Oehlbach PureClock comes into play, eliminating this interference and guaranteeing perfect synchronization between the USB interface and the converter. At least that’s what the manufacturer says. And since I didn’t want to connect another device with another power supply between PC and DAC, this passive stick came in handy. Snake oil or real solution? In any case, I was already excited, bought the part and also unpacked immediately.

Besides the stick, you don’t get anything else in the rather large package, but since the part is plug &amp; play, you don’t need anything else. Still, I was curious to see what was actually in and on it. I didn’t want to break it open, so I first measured the power consumption via a special adapter. A whopping 0.000 watts in the measuring process prove that the PureClock works completely passive, so unlike many other solutions there are no built-in electronics, which could even distort my signals with a bit of bad luck.

So if the completely passive PureClock should really do something, then probably by the fact that inside components like common mode chokes, capacitors, resistors and various other coils should be installed. An empty stick would be plenty cheeky, so I’m certainly not going to come across an empty case here. I don’t think anyone would go that far. But how effective is the whole thing in practice?

The starting position is clear. Since my Beyerdynamic A20 has only one analog input, I have to connect a proper DAC between the PC and the A20. But then I’m effectively listening to my desktop if I set the level high enough to give my headphones decent to full. It chirps like boozy cicadas behind a Mexican dice booth. If I now put the stick in between, the chirping is minimized to an almost non-existent minimum, even with a fully loaded graphics card. When idle, it becomes virtually inaudible. Then I can move the mouse again without getting a nasty tingling in my ear every time. So for now, the PureClock does what it’s supposed to. But how good is it really once you measure it?

The PC relies on an MSI Z390 Gaming Edge WiFi, a Core i9-9900K, a Corsair RM650X, and a GeForce RTX 3090 FE. But then the measurement results do surprise me, so please keep scrolling and reading.

The complete Big Navi UV Guide: Undervolting and power saving with the MorePowerTool simply explained | Practice
Does the new high-end RAM for Ryzen 5000 live up to its promise? – G.SKILL DDR4-3800 CL14 2x 16GB kit put through its paces