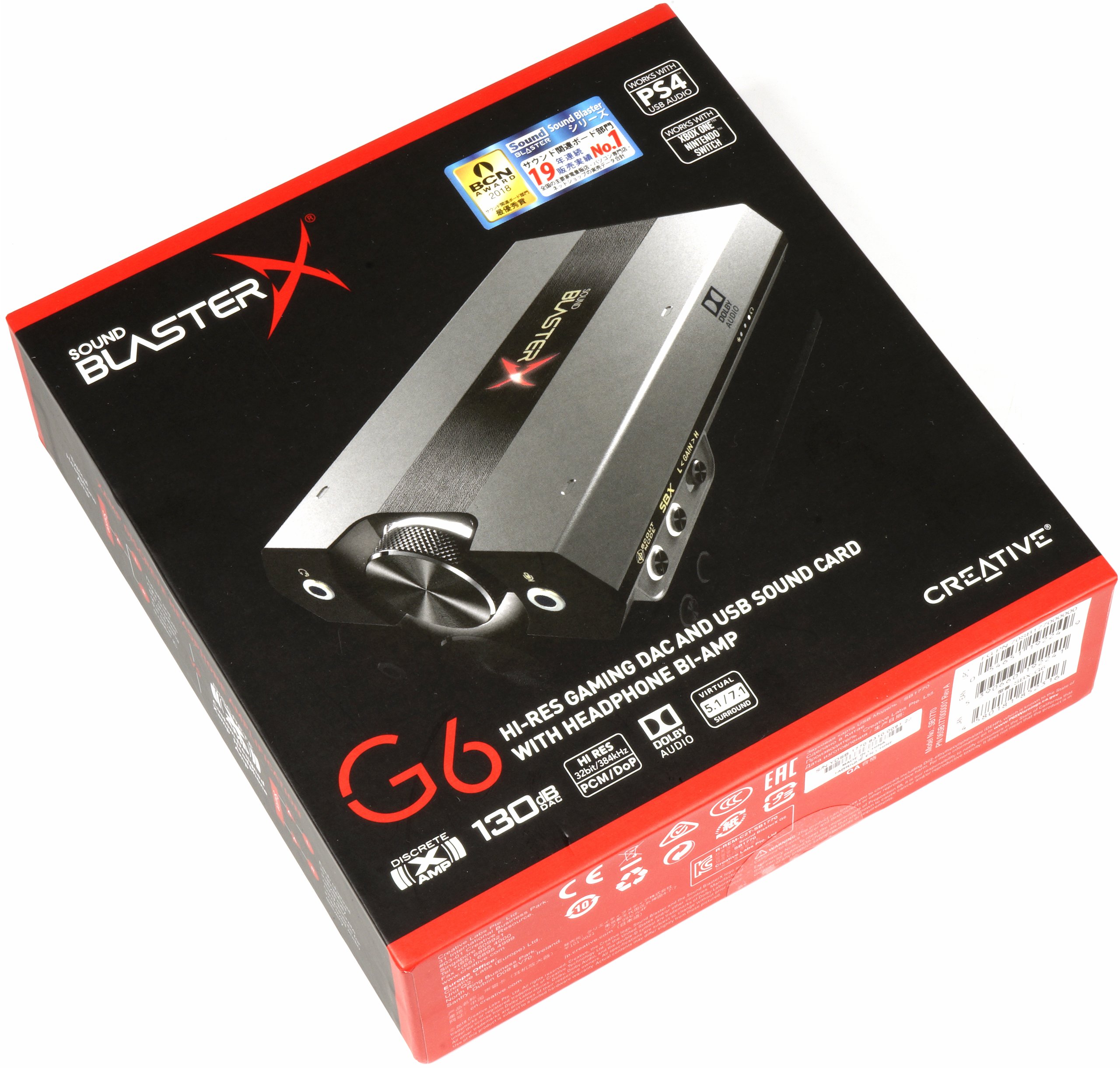 6 looks like a G5, at least at first glance and as long as you don't look at the price tag. The 149 euros on the Creative homepage are a whopping 30 euros above the current street price of the predecessor. Of course, the legitimate question arises as to whether the whole thing is really worth the extra charge. With its USB compatibility with PC, PS4, XBOX and Nintendo Switch, the G6 is at least something of an acoustic Swiss pocket knife.

Whether the advertised connectivity represents a real added value and whether all the software functions work (and above all, how), I will also test. But before you can even find out anything more specific, you have to unpack the sound card first. Exactly what I do now and find in the box the sound card itself, a USB connection cable and an optical cable along with instructions. There is no more, but you don't need it either.

But who proudly advertises with the possible connection of professional 600-ohm head-listeners and only uses 3.5mm jacks, could at least have thought about a 6.3mm adapter. The optical cable does not need a human being, because the connection to the TV is likely to take place rather rarely, Dolby decoder or sir. Of course, this is nice, only then one should have occupied a remote control or at least made the part controllable via app. Who gets up all the time and runs to the sound card when a movie is running?

But the design can be disputed, but it is at least somewhat timeless. With an entrance fee of just under 150 euros, however, one would have expected cool-looking metal and a little more weight and no bleak plastic landscape. The price, demands and expectations of the customers must already be better coordinated than here, because the value of haptics and optics is also an important acceptance factor for such a product. The following gallery shows the G6 from all sides:

The volume control is then still made of light metal and nicely grippy, albeit slightly shifted inwards and thus not quite as airy easy to reach. The obligatory RGB LED logo on the top can also be dimming, colour-changing and illuminated by software. One of the best effects included is the off function, while Kevin-Klaus should be happy about the illumination pulsating to the music. But more on that later.

On the front side, next to the center-mounted volume control, are the headphone output (left) and the microphone input (right). Here you will have to be a little careful if the lengths of the Y-separation are too small and you constantly reach into the tightly tensioned cable when adjusting. An asymmetric split would have worked much better, but the designer probably just wanted it that way. It's a pity, but that was already a little nuisance at the G5.

On the back, from left to right, we find the combination jack for the analog 3.5mm input, which can also function as an optical input. Creative cleverly saves an extra jack and a separate area switcher. Depending on what is plugged in or not, the part switches back and forth between USB, analog and optical input. The same applies to the output, which can be switched on both analogue and optical. The USB port can then be found on the right side of the outside. It serves as a digital input as well as for power supply.

Also new is the Dolby logo, which indicates the new integrated codec. The button for scout mode is not really needed by the professional, because this gaming effect has never really convinced me. Listening to the enemy before he was even born? Well, PR has to live on something. With the SBX button you activate the DSP profile and the gain button decides on the output voltage at the headphone output.

The specified resistance of now only one ohms is structurally determined, because the two amplifiers, now also separated and discretely constructed per channel, need at least this minimum value as a de-facto short-circuit fuse. The level reached is easy for normal mainstream headphones up to 32 ohms. If you want to operate headphones with higher impedances, you should set Gain to H to provide more voltage.

This works quite well, but with my Beyerdynamic Amiron Home I couldn't get a real full control. However, they have "only" 250 ohms. I couldn't lure a DT880 Pro out of the full reserve. Yes, it was loud, quite loud even. But not at the level that such headphones would create without distortion. Especially the Tesla headphones can do much more. Sorry, could.

The Sound BlasterX G6 acts as a 32-bit 384 kHz DAC with a dynamic range of up to 130 dB. The chip offers the usual functions in such price ranges as oversampling and mismatch shaping and it supports high-resolution PCM and DoP audio formats. You can also live well as a music-only listener if you need it and can use it. Appropriate one-players, of course, because the performance of the G6 also depends on the quality of the recorded material, logical.

In a direct comparison of the features, one can then also decide whether the 30 Euro surcharge is worth the thing (or maybe not):


Of course, I do not want to withhold the handbook from the interested reader either, because if you want to read one or the other detail, you are of course welcome to do so:

Technical details of the GeForce RTX 3000 – more than just a miraculous increase in shaders
With NVIDIA and DLSS 2.0 on the eco-trip from Turing to Ampere? Saving power against the trend is more than a nice gimmick!