Corsair has long been an established name among the manufacturers of AiO water coolers, and despite its high price level it can always hold its own in the first places in price comparisons, provided you sort by popularity. This makes it all the more surprising that of the 16 Corsair AiOs currently on sale, only one model with a 360mm radiator has been available to date. The now 3 year old H150i Pro RGB was finally given a refresh some time ago under the sonorous name Corsair Hydro Series iCUE H150i RGB Pro XT. Whether it was worth it, you’ll find out in a moment

The carton is printed in colour and has the typical Corsair yellow/black design. On the outside, pictures of the water cooling system, listing of the contents and rough specifications and dimensions of the AiO are printed. The release seems to have been delayed a bit, because there are several lettering with “2019” on the sides. 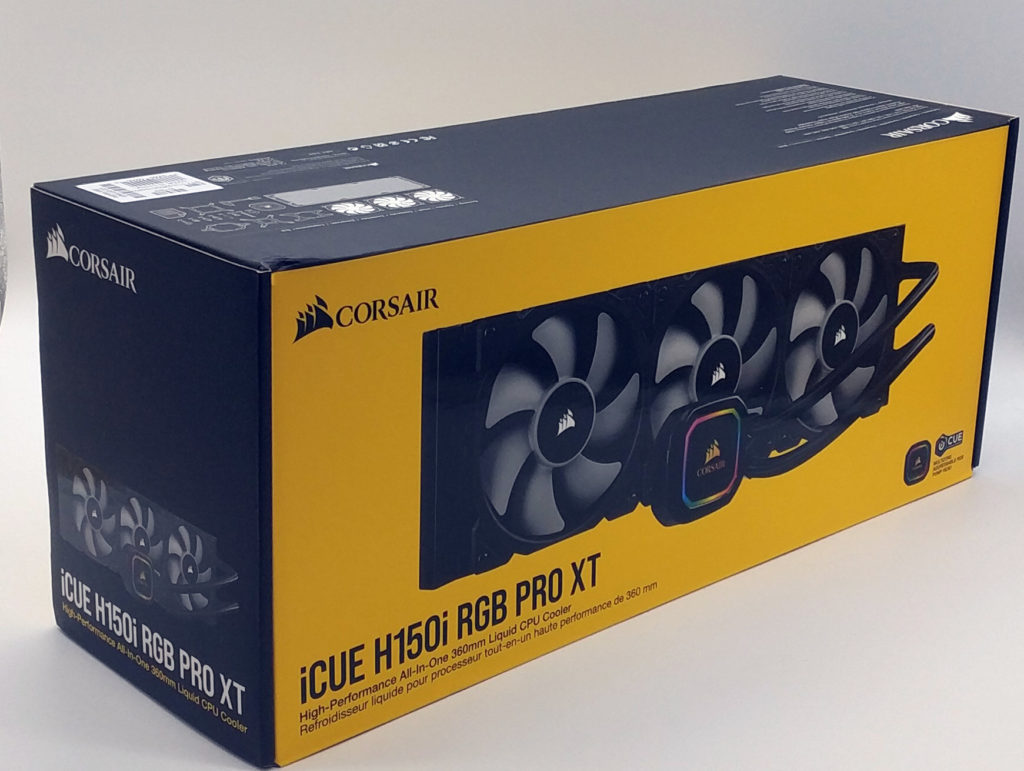 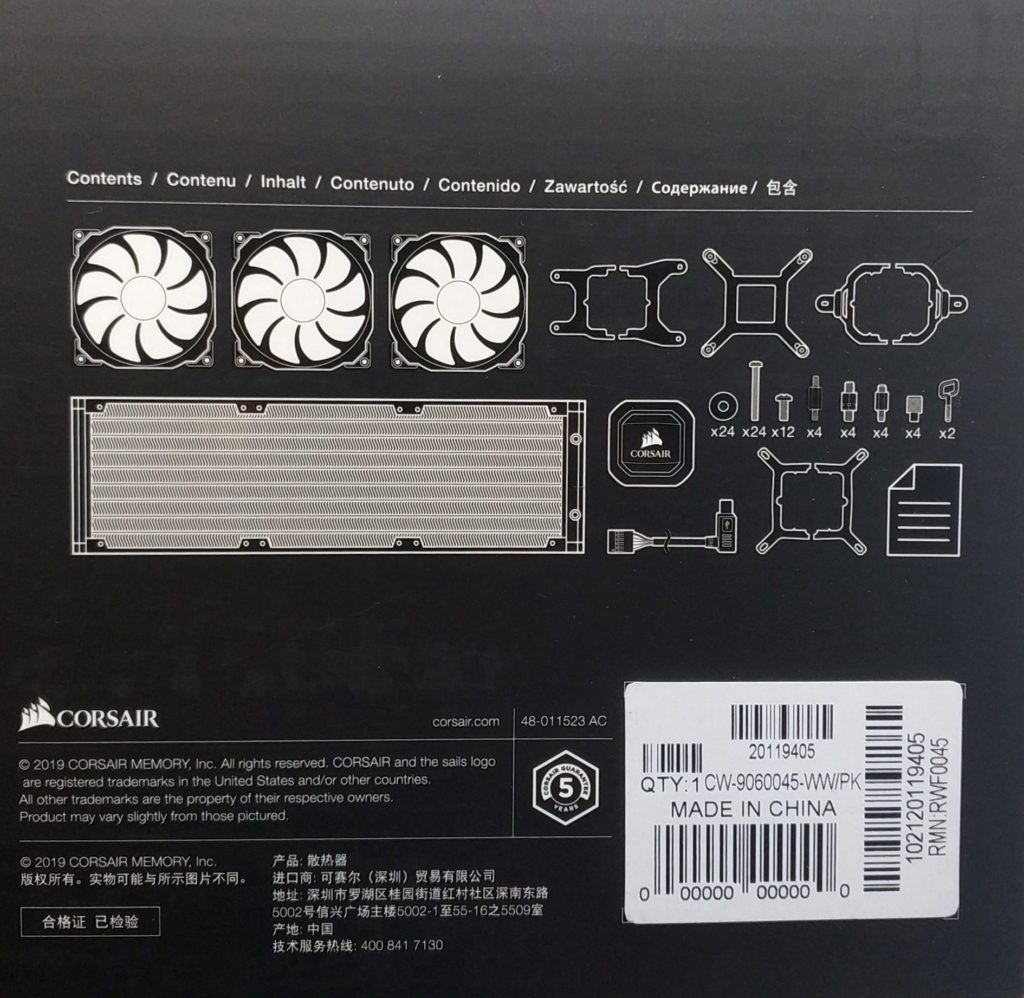 Inside the packaging, the usual picture awaits you: cardboard trays to safely enclose the water cooling system and lots of plastic bags.  In addition to the warranty information, the English manual is included, which is also available as a download in English only. 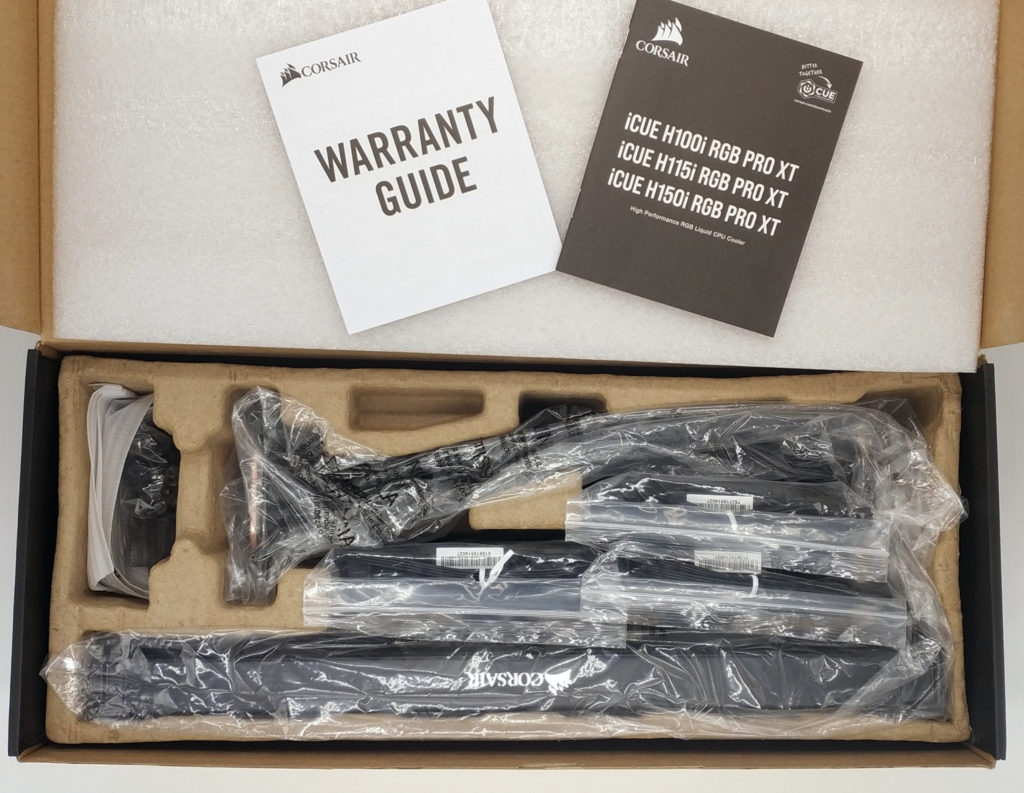 Freed from the bag madness, you can take a first look at Corsair’s new 360mm AiO. Visually, little has actually changed compared to the old version. The pump block got a completely black makeover and the RGB lighting gave way to an ARGB lighting with 16 individually controllable LEDs. According to the specifications, the new radiator is also exactly 1mm longer than the H150i PRO RGB. 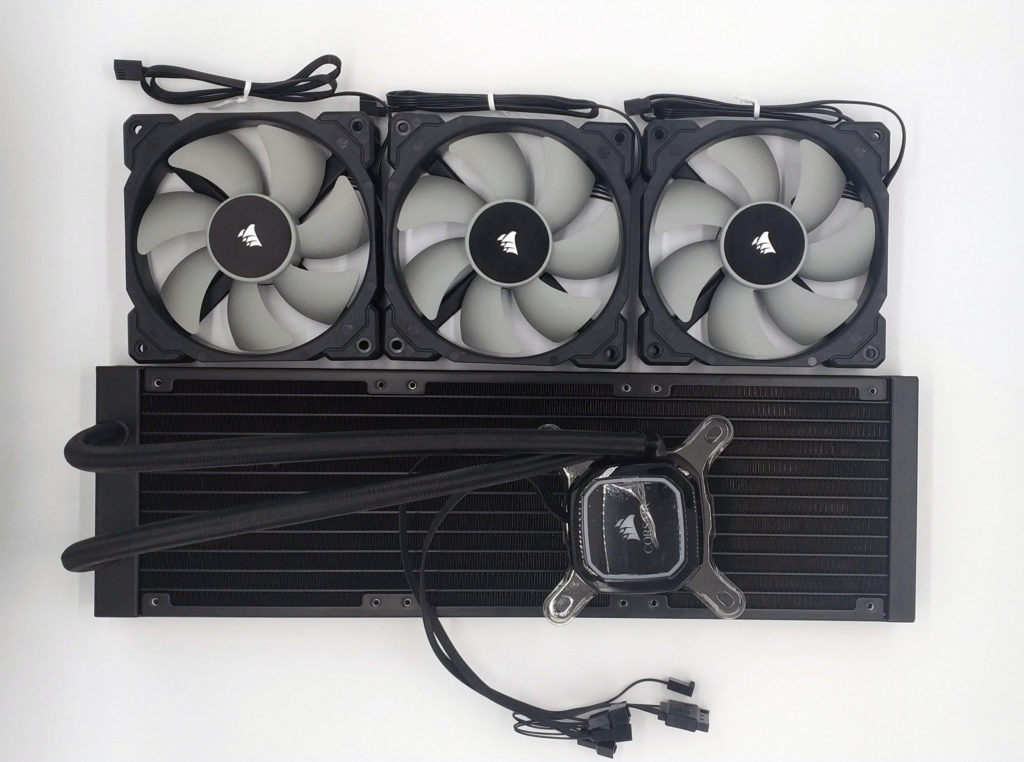 The new ML120 fans are therefore likely to make the biggest difference:

Corsair uses a similar bracket to Alseye coolers (or vice versa) with brackets for Intel and AMD sockets that can be plugged into the pump block. In addition to the brackets, a Micro USB to internal USB header cable is included, which is needed to connect to the iCUE software. For the price you might have expected an extra tube of thermal compound to the one already applied, but unfortunately this is missing. 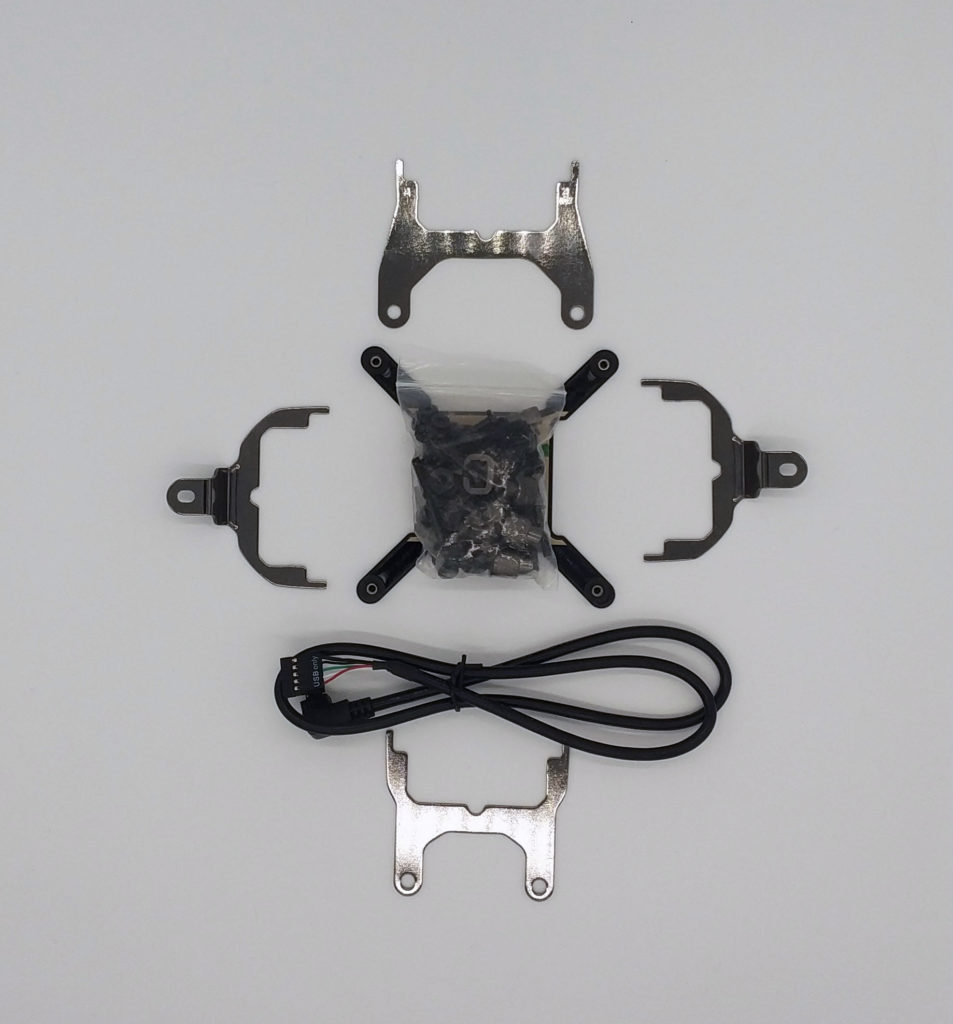 The mounting of the pump/cooling block for the AM4 socket is again similar to the Cooler Master AiOs, the block is simply placed on the CPU and tightened with 2 eyelets and hand screws. The original backplate of the mainboard can still be used, an exchange is not necessary. A backplate is included for Intel sockets, which also has small adhesive strips for easy attachment. 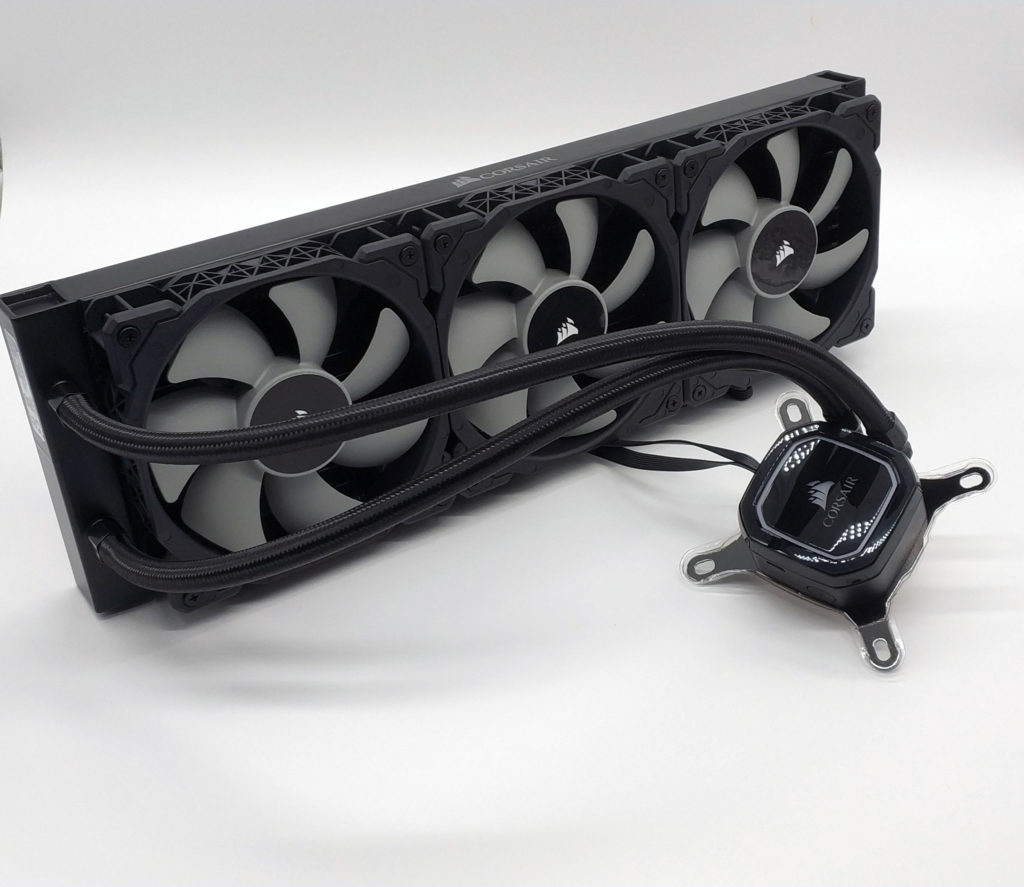 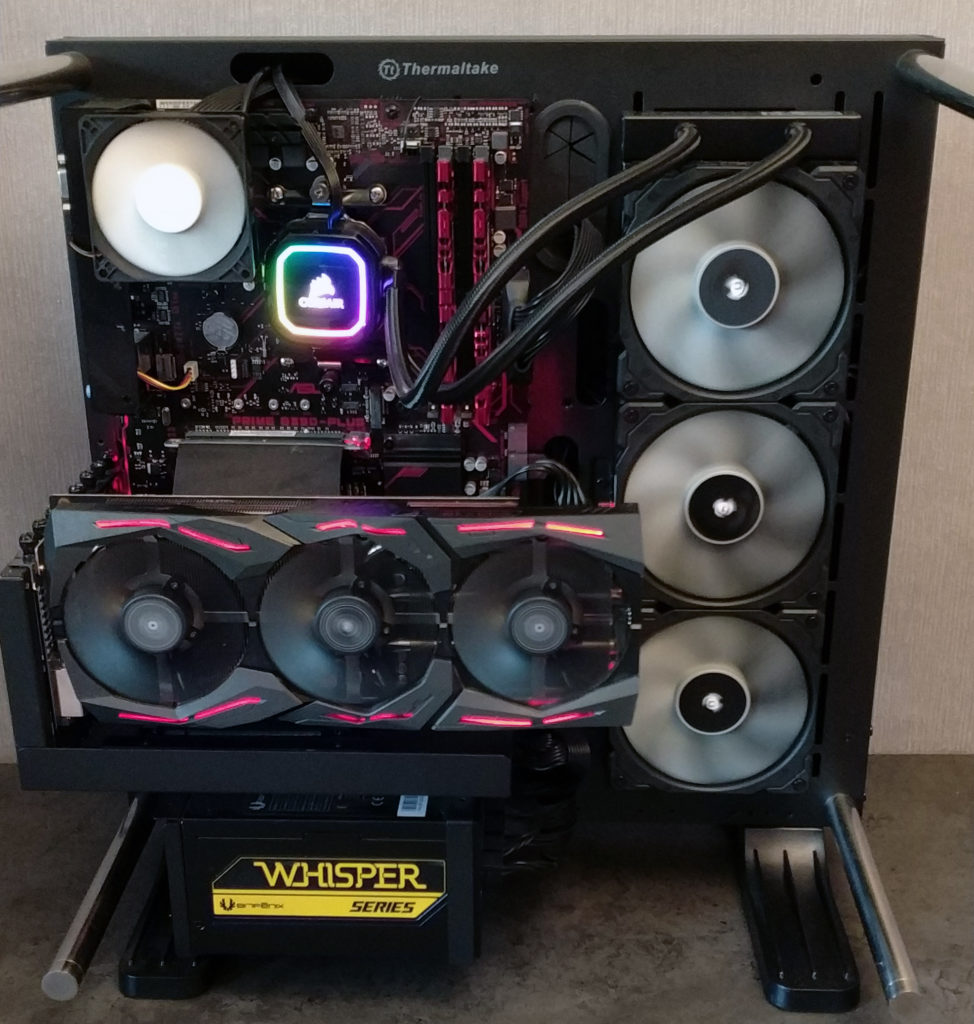 The radiator has some scratches and irregularities on both sides of the fins, which do not affect the performance, but depending on the visibility they affect the optics. 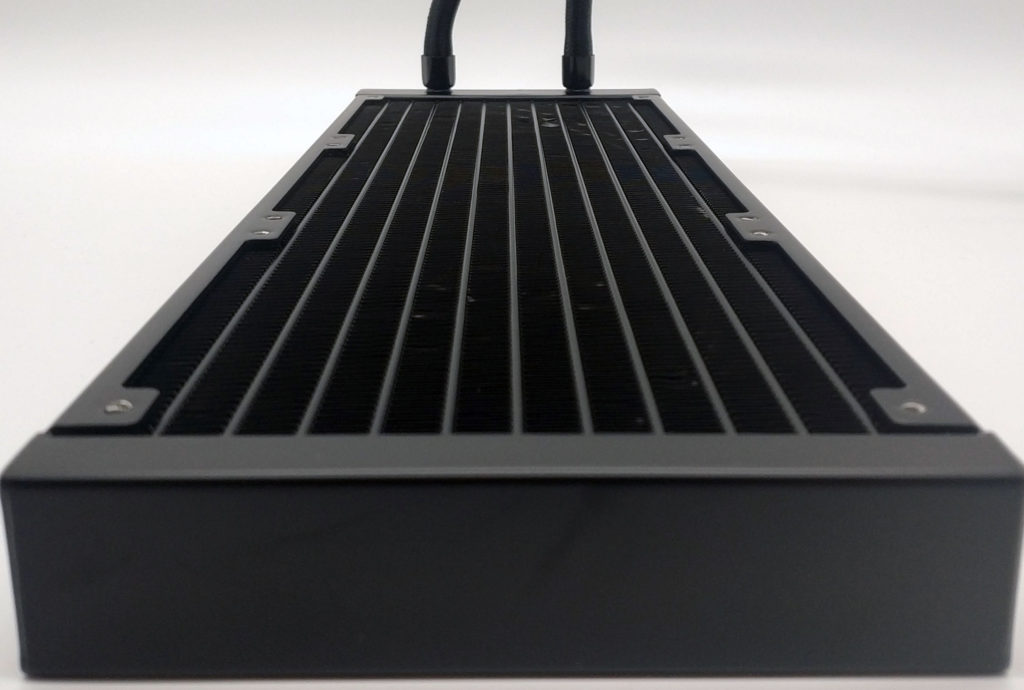 The complete control of the pump speed as well as fans and LEDs is done by the iCUE software. Once saved, the settings are retained and the program does not need to be permanently open in the background.

Besides different presets and self-creatable curves per device, iCUE also shows the current RPM and temperature of the cooling liquid. Interesting is the “Emergency Shutdown”, which shuts down the system at 70°C of the coolant. Silence enthusiasts might be thrilled by the zero speed mode, which can completely switch off the fans up to a definable temperature, for example in idle or desktop mode. 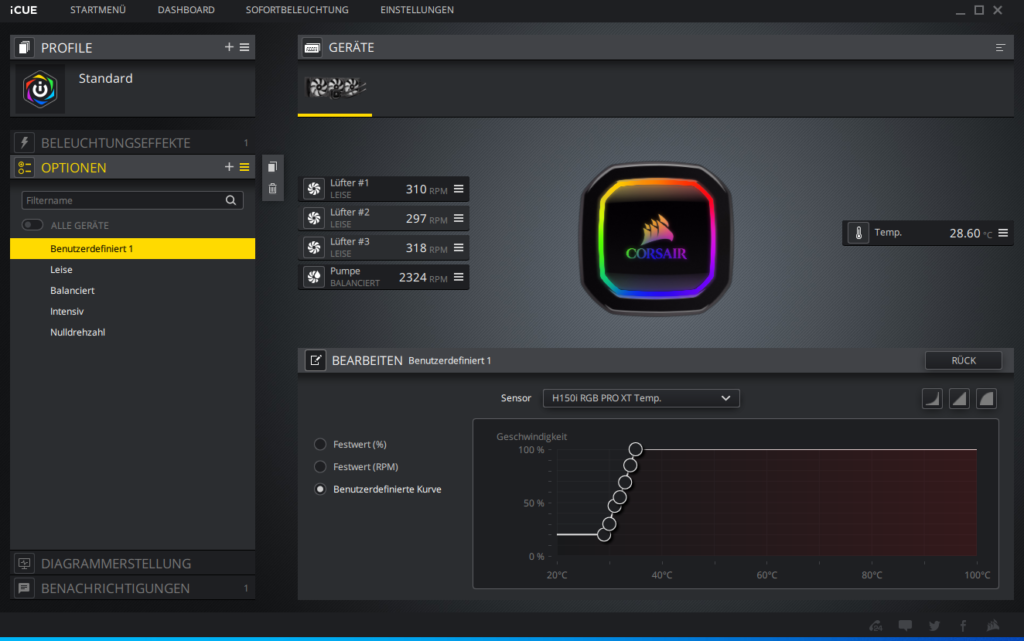 In the following I have the overview of the technical data for you: 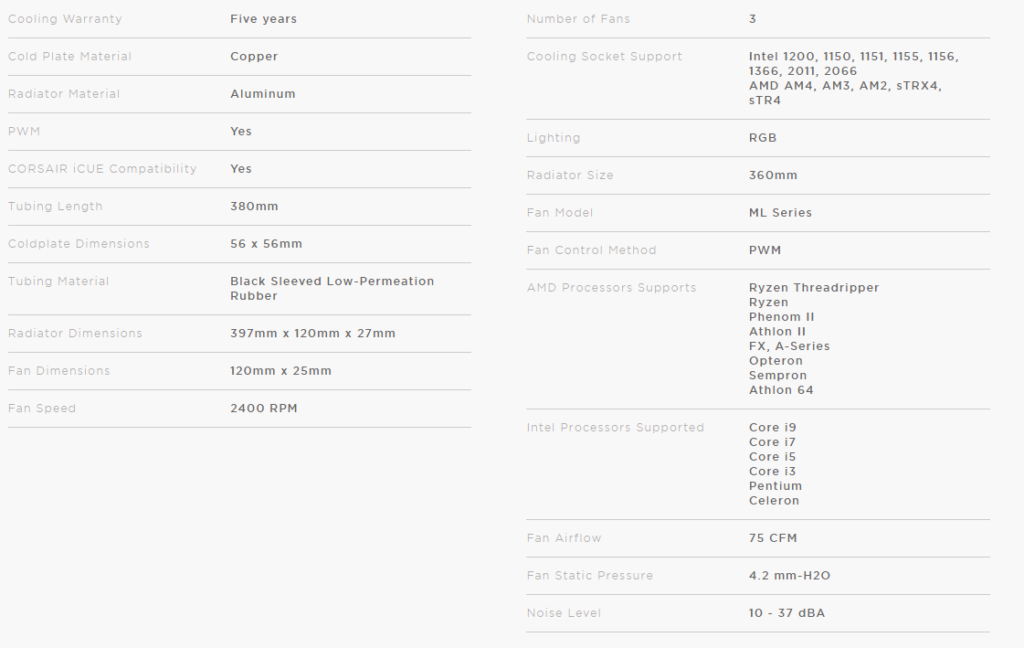 As always, you can find further information on the product page