Does that sound very lurid? Not at all. The whole thing isn’t that absurd, because such a Ryzen is actually a complete SoC (System-on-Chip). But you would have to bring such a processor to life first. That there are other possibilities for this, apart from all the known chipsets, is no state secret, but at least it seems to be uncomfortable enough for the chip manufacturer to at least classify it as confidential.

This bridge to chipset-free bliss is built by AMD itself, by the way, because it provides a kind of chipset dummy for those who really need something like that, which ultimately makes it possible to start the CPU even without an external chipset. By the way, this chip is called “Knoll Activator” (for whatever reason) and I will come back to this in a moment. But first let’s look at a Ryzen block diagram of what is exposed to the outside of the processor. 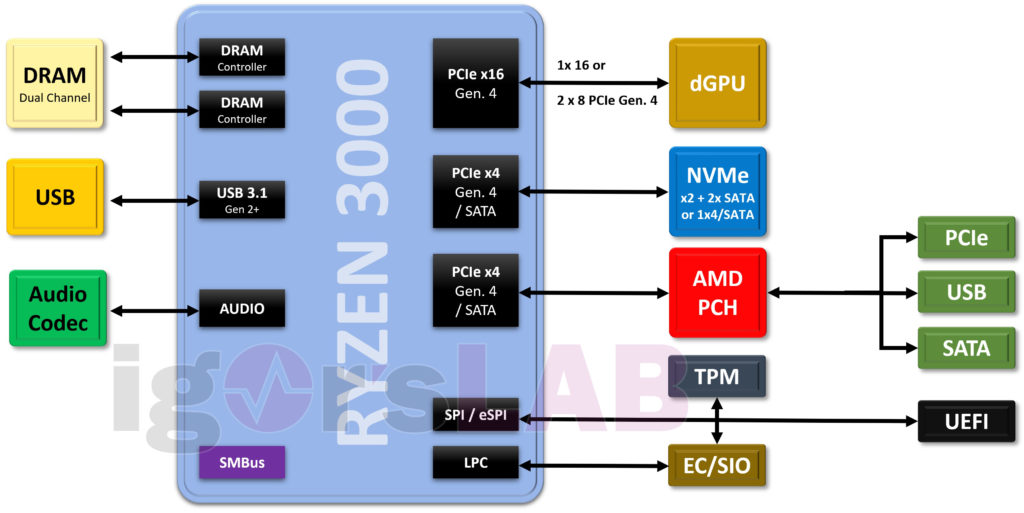 And now we come to the mysterious “Knoll Activator”.  Interestingly, this chip operates below the 300 chipset, although the documentation is of course also quite meager due to the small functional range of this activator chip. By the way, I took the liberty of slightly alienating the cover page by removing a few things for reasons of source protection.

I picked the introduction to the “Knoll Activator”, because it actually describes quite exactly what the good side does or rather what purpose it serves:

This document provides information about the AMD family of activator ICs, code-named “Knoll”, necessary in the AMD AM4 infrastructure for activating socketed processor peripheral I/O and processor features in the absence of an alternative AMD chipset. There are multiple product models in the “Knoll” family. Each model enables different peripheral I/O and AMD Socket AM4 processor features in the AMD AM4 platform infrastructure. See each Socket AM4 processor’s datasheet for details on enabled I/O and features per activator model.

The “Knoll” family is interfaced to the AMD Socket AM4 processor and operated solely through AMD platform software. No elements are accessible to the user. The user is only responsible for physically designing the circuit board for “Knoll” component placement, signal routing to the AM4 socket, and power supply of the “Knoll” component, consistent among all “Knoll” models. The “Knoll” models consume very low active power momentarily during startup, insignificant power thereafter in sleep mode… The “Knoll” device must be connected specifically to I2C Channel 2 on the processor.

Theoretically, once Ryzen has been activated, it can be used almost completely without a special AMD chipset. By the way, it is in principle possible to run any of the AMD chipsets on the existing Ryzen CPUs or the other way round even current Ryzens with old 300 chipsets. Because the CPU itself does not care about the periphery. The fact that new chipsets are generated in the course of the product cycles to ensure the best possible “user experience” is understandable, at least from a commercial point of view.

At first glance, it may seem surprising that board partners no longer use their own I/O solutions and produce custom boards that do without the expensive component in the form of an AMD chipset. HP shows that this is technically possible and perhaps even makes sense with the quite current VinsonC motherboard, which even uses a complete APU as pure SoC and also completely dispenses with the expensive chipset. However, these are customer boards that are never likely to reach the end-user market.

Things like a serial and Ethernet connection are solved by a normal, very cheap SIO chip (Super I/O), which complements the basic functionality of the Ryzen. Because you don’t need much more than the normal interfaces of the IOD (I/O die) of such a Ryzen CPU. So it is not only theoretically, but also practically possible to build small and self-sufficient systems without the expensive and power-hungry AMD chipsets, if you can do without certain features. This HP board has also proven this.

Personally, I would be very happy if you could get such simple boards for AMD’s entry-level APUs in the normal end user market, because then you would be able to use more powerful systems than the current embedded offerings from AMD, which you don’t explicitly need for gaming. However, at least AMD’s profit target should contradict this wish, which is a pity, but probably cannot be changed.

But perhaps a Chinese board manufacturer, who is not bound by various board partner contracts, will have mercy on the implementation of such a board. And I’m pretty sure that all this would be possible with the next generation of CPUs and APUs. You just simply have to do it. 🙂

Intel’s Alder Lake platform will be a hybrid: large and small cores for the x86 desktop market like ARM’s big.LITTLE
AMD Epyc Milan Leak – Three early Genesis samples listed in A0 stepping along with core configuration and clock rates | Exclusive