Granted, it sounds a bit lurid, but in the end it is. Well, at least a little. But which all-in-one compact water cooling system can cope with up to 400 watts of waste heat (and even a bit more)? Of course, the watt figures are a thing of the past because they also depend on the CPU model used and the resulting heat flux density. That’s exactly why I tested this piece on platforms that are known for their high power dissipation as well as their high heat flux density. Everything that is sorted underneath can then be calmly booked as a warm-up exercise. 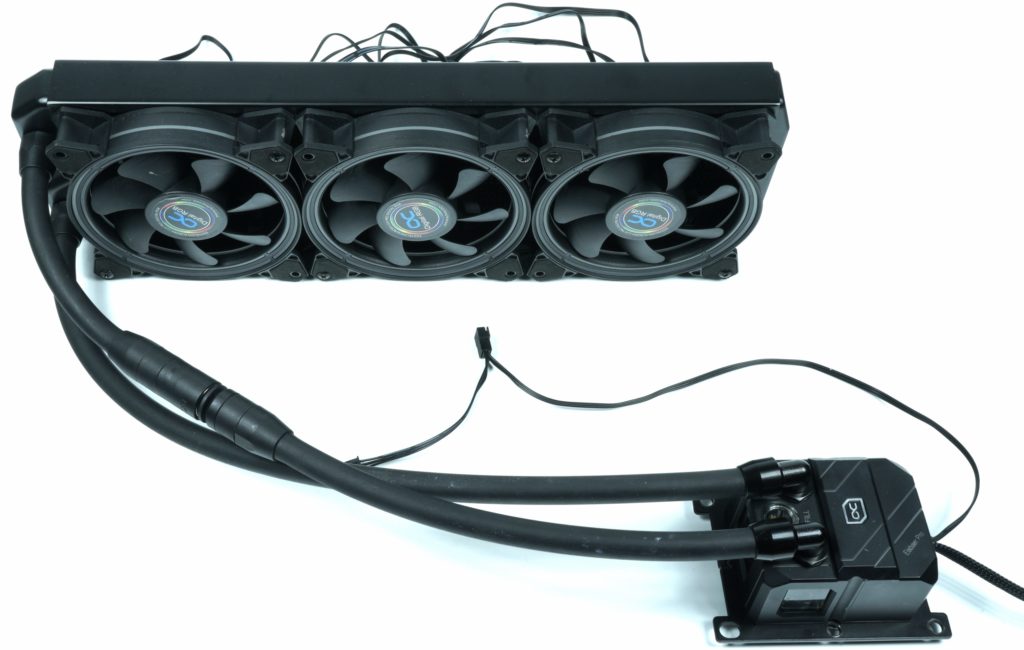 But let’s come back to the Alphacool Eisbaer Pro and the prototype, which once again made it into my own test lab. Since I have all common platforms including CPUs up to the real workstation area, there was only a kind of validation to be done, if this new AiO can meet the requirements of the “Pro” in the end even in the hard practice. This is exactly where today’s hands-on test will start, because it is first of all about a proof of the concept. The detailed test follows later with the finished product and certainly not with such an extensive use of hardware. 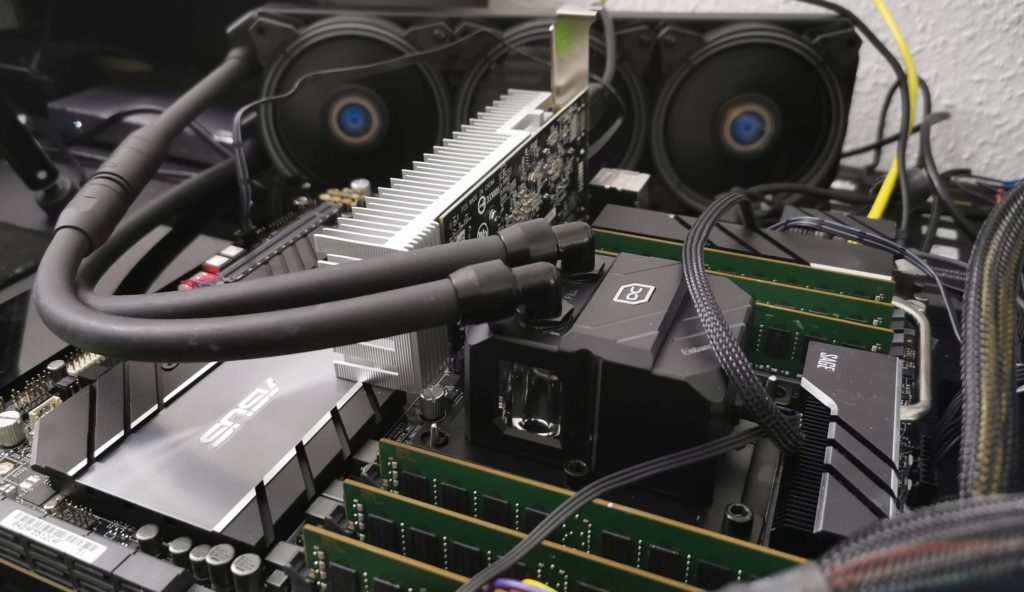 But first of all: it is currently only one of two real existing models, but already more than just a PVT sample, which is unlikely to change much until the (soon) start of mass production and which has shown some signs of use in my tests. Scratches and traces of heat-conducting paste are thus not included in the scope of delivery, but show very clearly that this AiO must have already led a quite exciting life. However, the angles in the picture will certainly give way to straight connections, as this AiO is a modification from Alphacool’s server portfolio and is therefore limited to the 2U format in terms of installation height. You don’t have these limits in the PC. 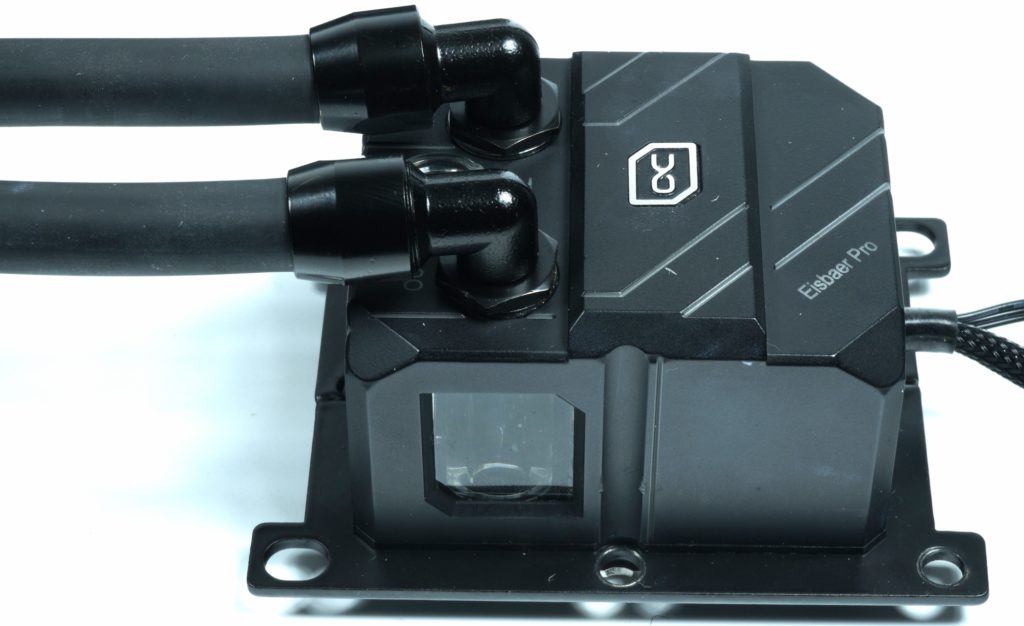 The model tested here has already been fitted with a 360 mm radiator and also already has the new Alphacool quick connectors (but only in the server version, the consumer AiO will use the older models). In the first check, these plastic connectors made a thoroughly useful impression. It could be opened and plugged together ten times without any leaks or leakage. However, you will probably have to allow for one or two small tears of the clutch when opening it. But the faster you unplug the plug, the less danger of dripping. The TPV rubber tubes on the AiO are approx. 40 cm long and should cause relatively little diffusion loss. As is well known, one can argue for a long time about optics, but not about the quality of such hoses. There is solid server technology here, which has proven itself in everyday life. 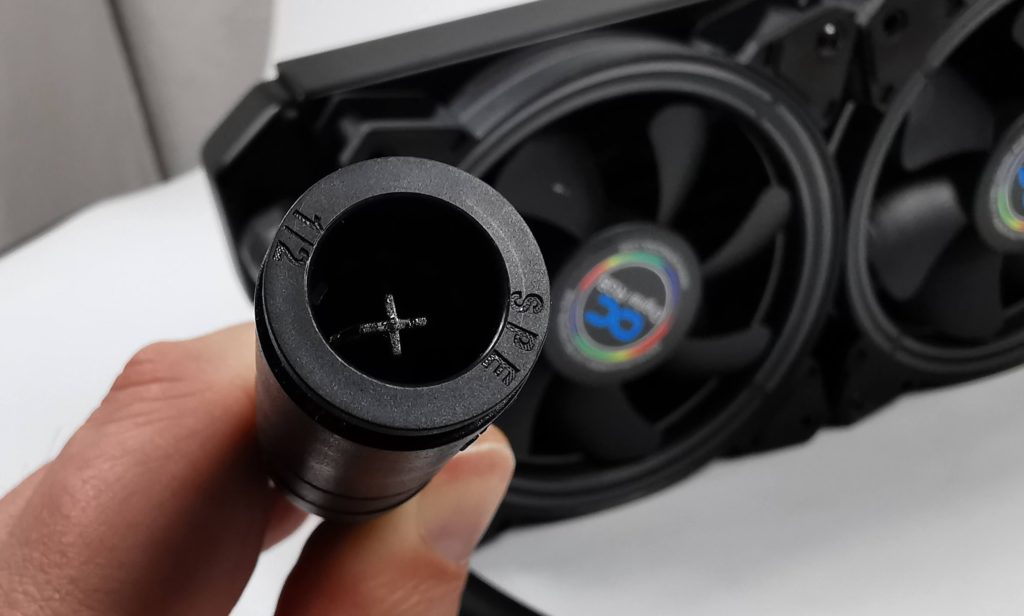 The pump sits in the pump housing, typical for Eisbaers, but has been completely redesigned. I measure approx. 2600 rpm and I finally decided not to turn it down because you can’t get an already quiet and almost inaudible pump even quieter without losing functionality. There’s nothing to be settled here, it was just as well. The new magnetic bearings do what they should and the flow rate is sufficient. I deliberately chose a slim radiator because, with the right fans, it is the most likely to fit into a PC concept that has to rely on a compromise between cooling performance and noise emissions. Further details will be given in the review of the final product. 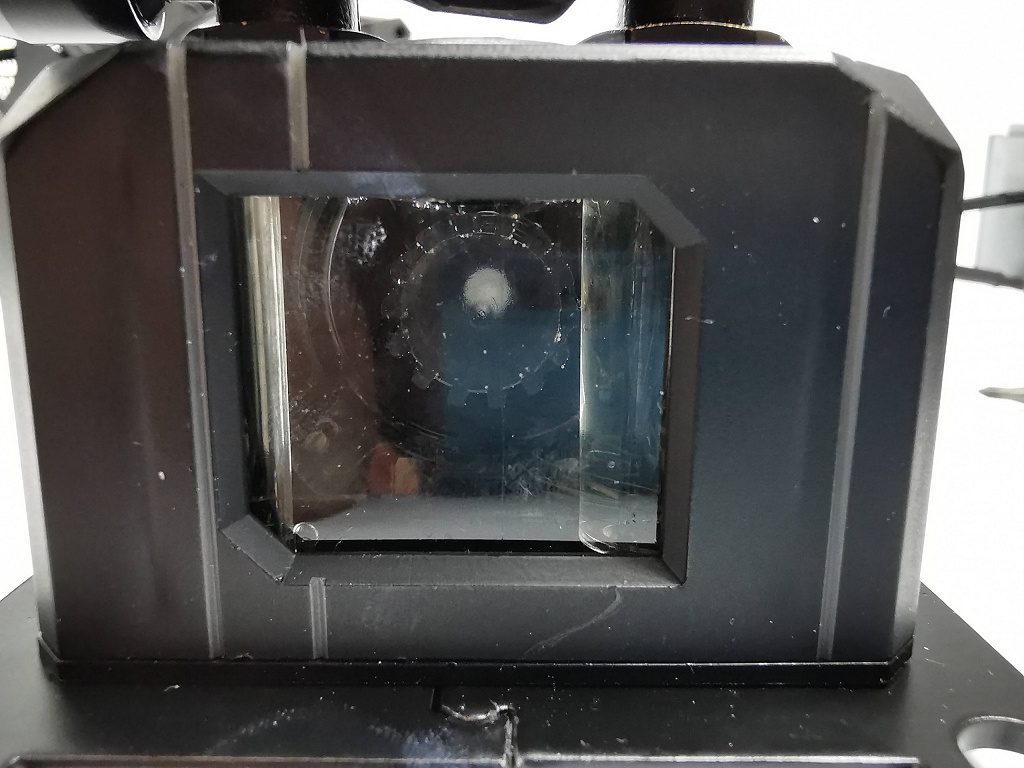 The cooling surface of the AiO is huge and is roughly equivalent to that of the Alphacool XPX Pro CPU water block. The interesting thing is that an AM4 bracket will be included here in addition to Intel’s C621 socket and the SP3 (TR4) in the end customer version. This covers all current Ryzen CPUs and the upcoming Ryzen 4000. The cooling surface clearly overlaps the IHS of the Ryzen CPUs, so that all discussions about a misalignment of the cooler by means of any adapter are automatically settled. There is certainly no better way to cover this. The advantage of the AiO with this overlapping cooler is that the contact pressure remains centered, which is lost with other, more cosmetic adapter solutions. But I will do a real test for this when these brackets are ready. 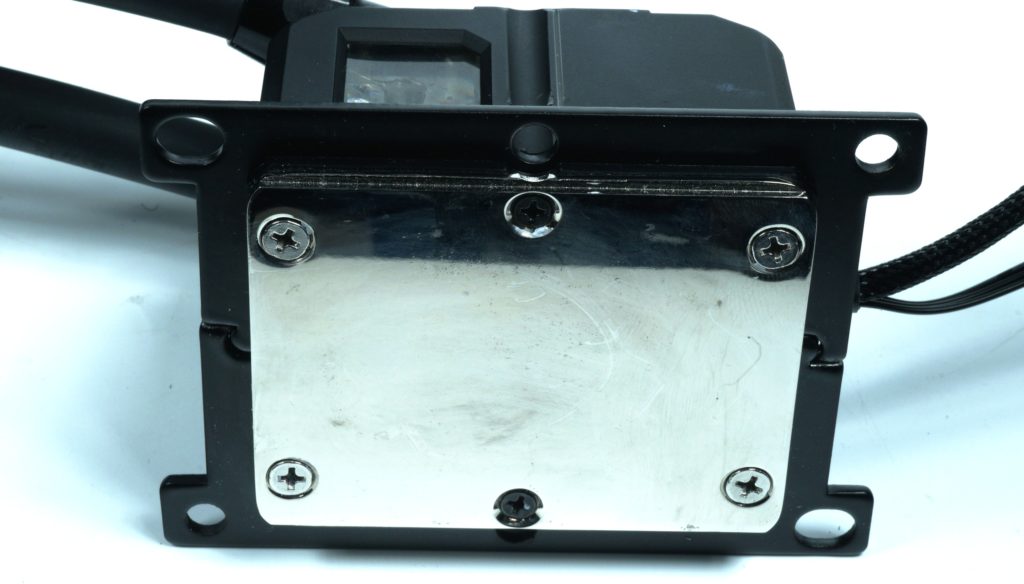 This is exactly where the limitations of using an AiO compact water cooling system usually lie. The statement that you can control 400 watts and more with a cooling solution is completely misleading if you disregard the heat flux density. For example, it is possible to a Threadripper 2990WX is much easier to cool than a Threadripper 3970X, whose chipplets are already manufactured in 7 nm and which has significantly smaller hotspots, where one has to dissipate the approximately same waste heat much faster over a much smaller area. 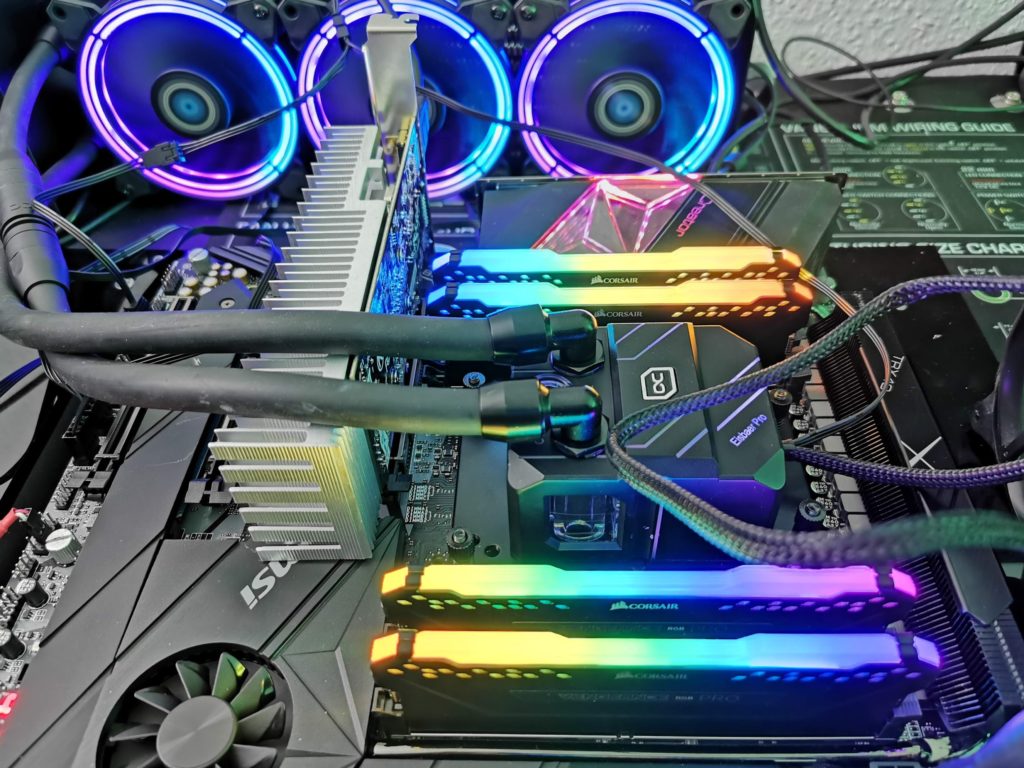 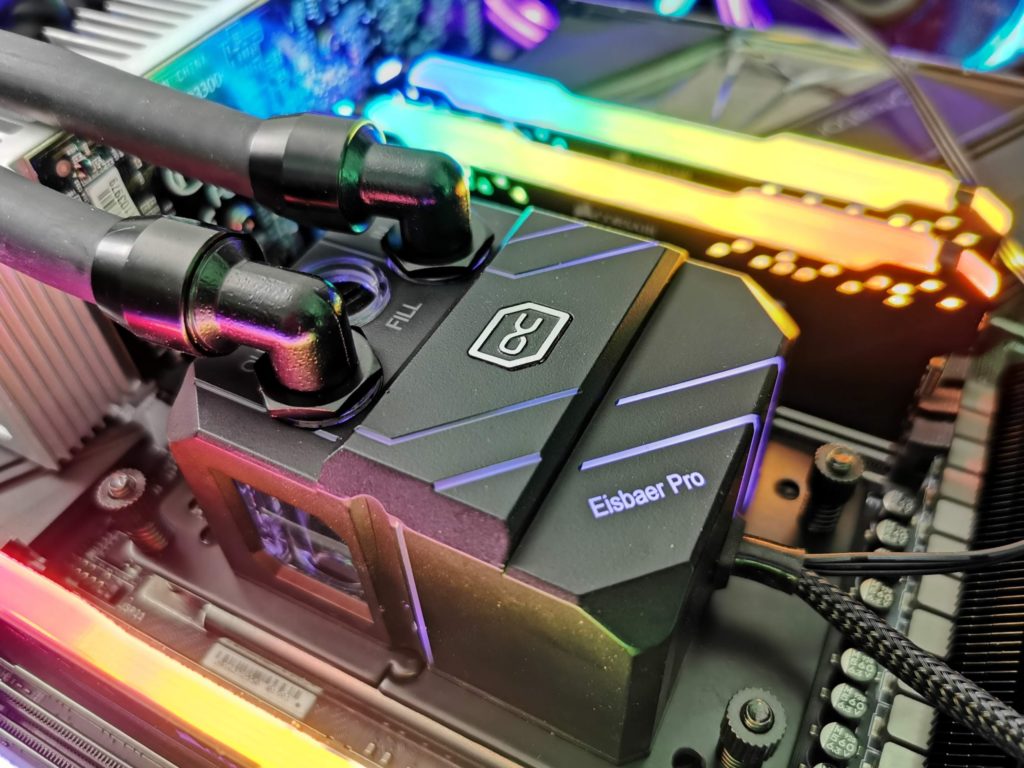 The simplest way to cool older Intel CPUs with their large structure width is still to use a cooling system. Thus, an Intel Core i9-7980XE remains even at about 360 Watt power loss still safely under 90 degrees, as long as the fans are not turned down too far (approx. 1200 rpm). If the propellers are turned up to full power, a few minutes with 430 watts and more are possible before the CPU starts to spin. This is exactly why I have fixed all the values listed below after 60 minutes, which should be quite sufficient for practical use. Especially since the voltage transformers then usually weaken faster than these AiO. 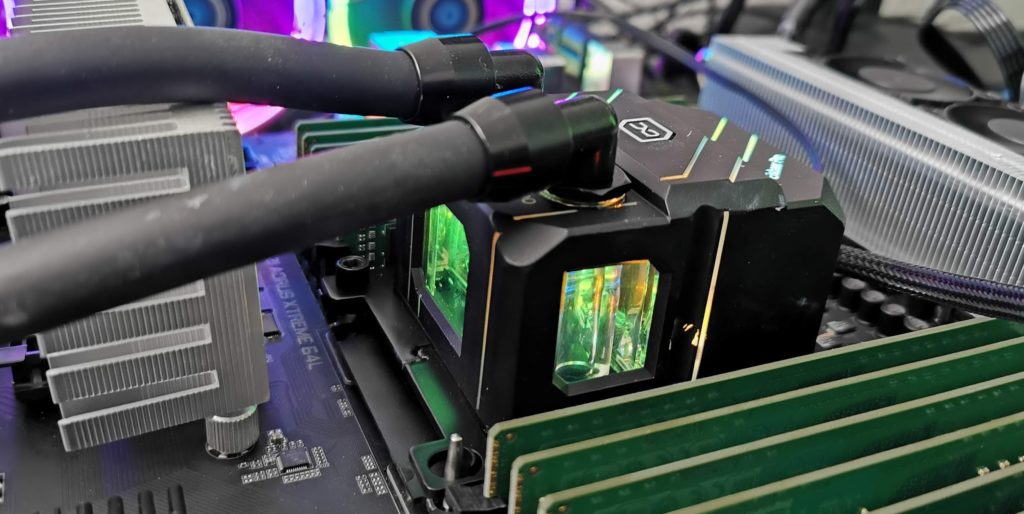 Let’s start with a rather light warm-up and an Intel Xeon-W 3265, thus the 24-core of the current generation. Since the CPU is designed for a TDP of 205 watts, the AiO is really bored. The 57 °C is reached after approx. 48 minutes at a fixed fan speed of 1100 rpm You can leave it that way and wait relaxed for the things to come.

The Threadripper 3970X is already a different caliber, because in addition to the four 7-nm chiplets, we get to the already mentioned problem with the very high heat flux density, since the heating of the IHS is very punctual. The support of the cooler on the so far (in terms of surface area) largest tested CPU is completely sufficient, the mounting kit is useful. However, the small union nuts should have been a little larger, because manual tightening is quite laborious. 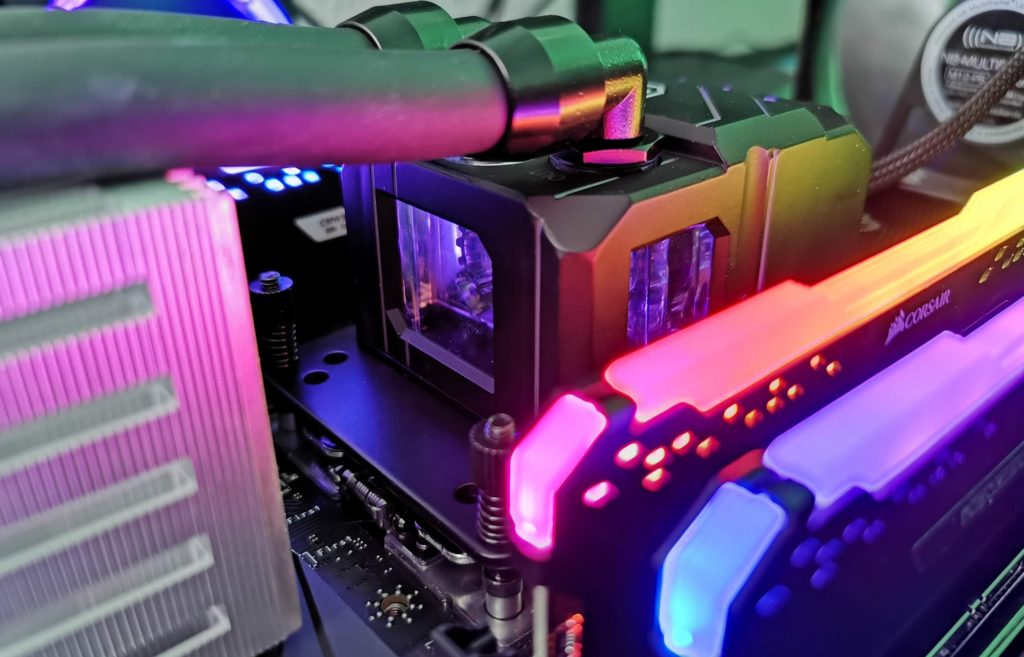 By default, 280 watts can already be easily extracted from AMD’s 32-core, which can also be disposed of quite elegantly. the 66 °C are a good value which can be reached already after approx. 30 minutes is reached. You can live with this, especially since other AiOs with adapters already advance into areas where the CPU starts to jerk around under permanent full load.

And where was the end of the flagpole then? Here, however, the heat flux density catches up with us, despite full fan speed of about 2000 rpm. While the old Threadripper was still coolable up to 400 watts and more without throttling, the 3970X can be cooled from about 360 watts reached the limit after another 32 minutes.  It may only trot sporadically, but 90 °C is now nothing that you really need for hours under continuous load. However, the CPU has already arrived at 4.3 GHz Allcore. Brute, what then 32 cores still achieve!

The first conclusion is mostly positive, because it is not yet a final sample. And in contrast to the server and workstation version, aRGB is of course also included. The cooling capacity is enormous for an AiO and good news for all owners of a Ryzen 3000, because the 200 watt limit can now be moved towards the North Pole without hesitation even with a Ryzen 9 3900X or 3950X. Nomen est omen.

NVIDIA NvEnc vs. CPU encoding: Can the video encoder of the Turing cards be used for twitch streaming and keep up with a CPU? Analysis with Netflix VMAF
Corsair H150i RGB PRO XT under test – Strong 360mm AiO with a simple design, but with lots of colour