Dare to Challenge – rarely has a slogan been more fitting than that of the Z590 OC Formula, ASRock’s new high-end overclocking motherboard! Intel’s latest mainstream CPUs of the Rocket Lake family don’t bring any big advantages for gamers, but for friends of memory overclocking the 11th generation opens completely new possibilities with its new memory controller. Unsurprisingly, all the motherboard manufacturers are throwing their hats in the ring once again on this occasion to fight for the crown of the OC battleroyal. 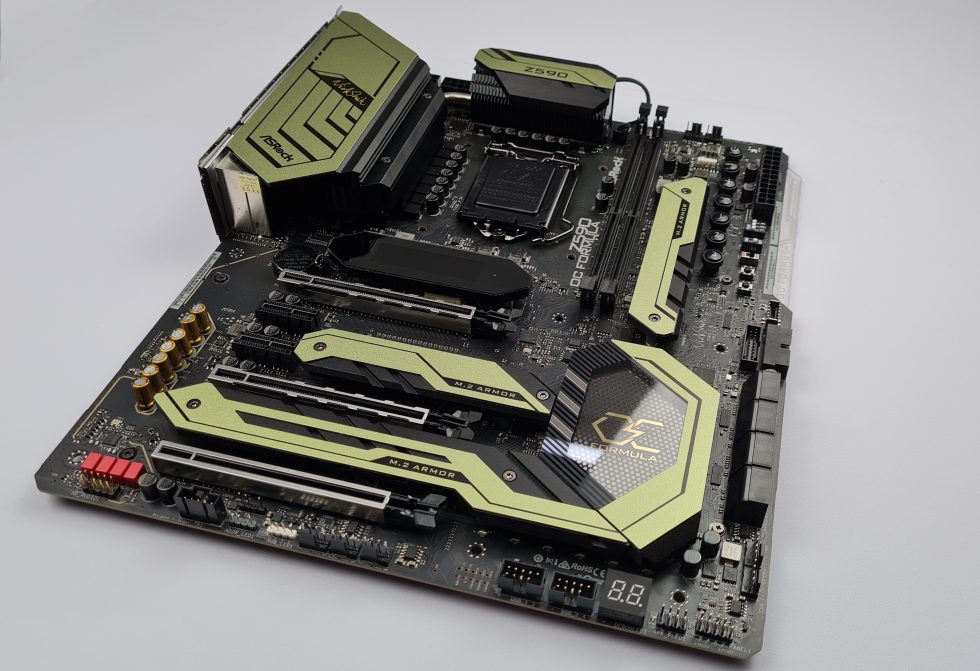 But this is not without risk, because in the end usually only one can prevail, in the performance and thus also in the choice by the XOC community, which always wants to use only the best hardware for the highest benchmark scores. If you are only a 100 MHz behind, you will be sorted out and, in case of doubt, as a manufacturer you will be left with the development costs. It is all the more remarkable that ASRock also dares to take this step to the spearhead of OC motherboards at the end of the DDR4 era.

The reference for today’s test is a Maximus XIII Apex. Asus has been able to get itself firmly locked into the hearts of the XOC community over the last few generations with the Apex series, making it the benchmark for what a board in this class needs to be able to do in order to compete. Other manufacturers like Gigabyte with the Tachyon, MSI with the Unify-X or EVGA with the Dark should also be mentioned, but have only made it to the market in homoeopathic quantities if at all so far and therefore can’t really have a say in today’s review.

So first, let’s take a look at the features ASRock has added to their overclocking flagship, largely due to world-renowned overclocker Nick Shih, whose experience and secret ingredients are meant to propel the OC Formula series to new heights. As it says on the front of the product page, “Unlike most so called overclocking motherboards that are designed by engineers who don’t have adequate experience in extreme overclocking or have never participated in an OC event, Z590 OC Formula is the only motherboard in the market that are designed by a genuine overclocker, Nick Shih, who is hands down one of the most talented overclockers alive.” So there is no lack of self-confidence. 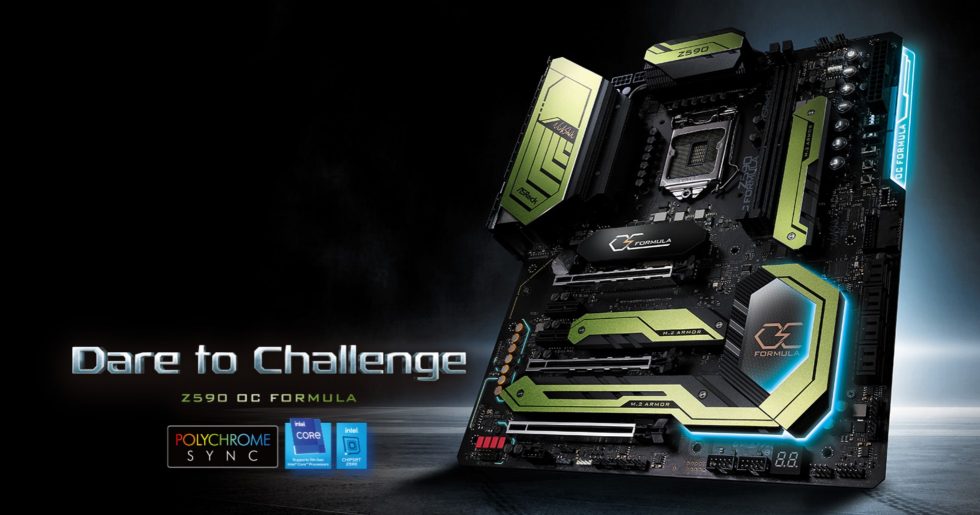 Probably the most exotic feature are the SMD DIMM slots, which are otherwise almost only installed on small ITX boards due to space contraints. In addition to the space-saving installation, (SMD) Surface Mount Devices DIMM slots offer another decisive advantage: better signal quality. With conventional DIMM slots, the contact feet of each DIMM slot pin protrude through the entire board to be soldered in place. Due to the actually unnecessarily long and protruding connections, signal reflections and thus problems occur, especially at higher frequencies. 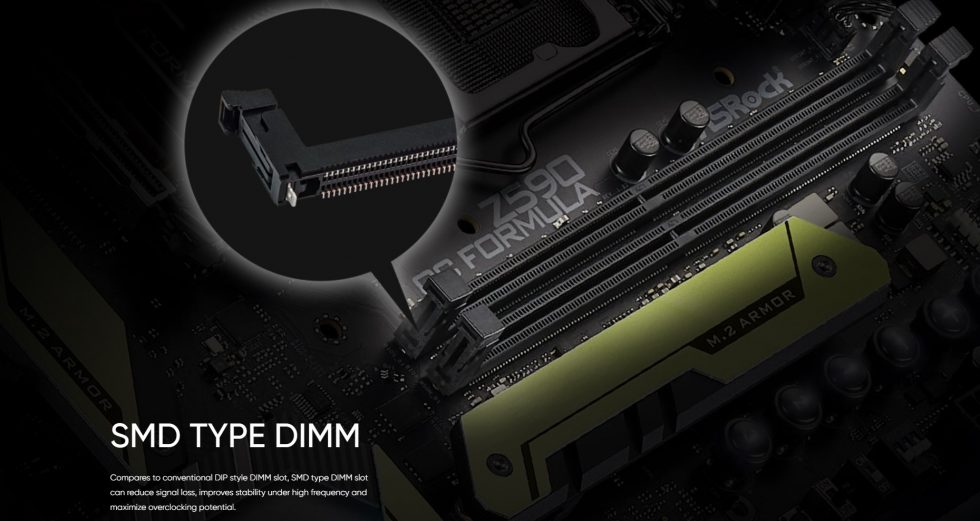 SMD DIMM slots, as the name implies, are mounted only to the surface of the board, which means more complex assembly, but also no excess traces and paths where signals can get lost and reflected. Furthermore – as usual for OC boards of this class – only 2 DIMM slots are installed to keep the load on the memory controller of the CPU as low as possible and to be able to move the slots of both memory channels even closer to the CPU. 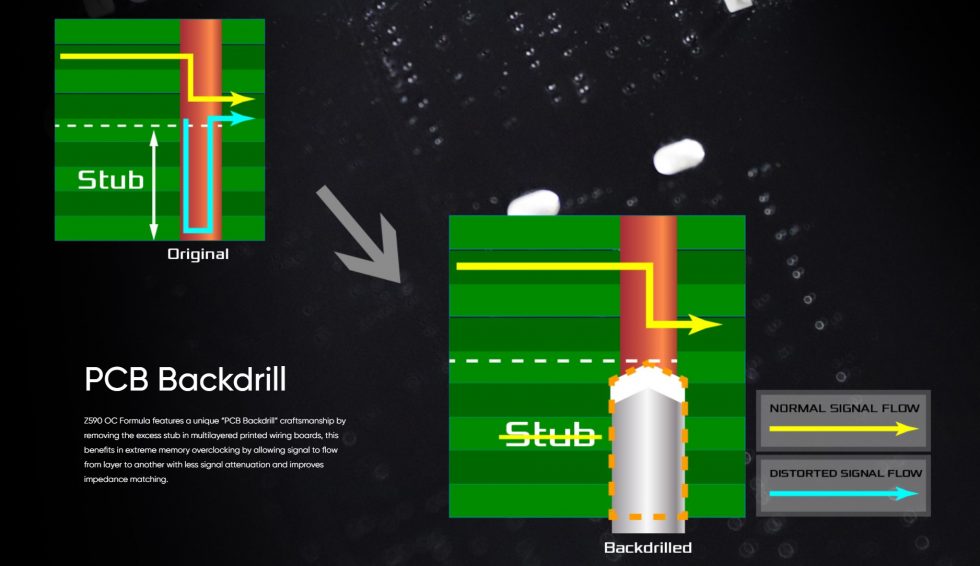 To improve the signal quality even more, ASRock also uses a 12-layer PCB with backdrill process, which some of you may have heard in connection with current Ampere Nvidia cards. The principle here is also simple but effective: The signal-carrying traces in different layers of the board are isolated from each other as well as possible and at vias, i.e. connection points between layers, excess conductive material is drilled out from the back to further reduce reflections.

As a consequence, ASRock advertises clock speeds of DDR4-5600 and more. Whether the board can keep what is promised, also for daily, stable use of such breathtaking speeds, will have to be seen in today’s test. But at least on the paper of the data sheet, the conditions are right for this.

On the other hand, the 16-phase voltage supply for the CPU core voltage, consisting of 90 A Smart Power Stages, and the 2-phase voltage supply for the main memory sound almost unspectacular. However, ASRock has definitely not skimped on comfort features for overclockers. So the board has an OLED display to monitor system parameters like voltages, temperatures, BCLK etc., on-board buttons for power, reset, but also BCLK plus and minus and 3 definable profiles.

Furthermore there is a “BFG” button, comparable to the Safe Boot of Asus boards, a retry button, dual BIOS with a dedicated switch, LN2 mode, slow mode, dip switches for the PCI-E slots and of course a postcode display. Does the hobbyist or extreme overclocker of the world miss anything here? I don’t think so. If you want to know more, you can find all information and links directly at ASRock’s website. As a starting point, I have linked the specsheet of the Z590 OC Forumla here.