Today I turn for the first time in detail to AMD’s upcoming Socket AM5 (version 2), as it will be used for the upcoming Raphael CPUs (Ryzen 7000). AMD consequently changes from the PGA (Pin Grid Array) with the contacts on the CPU to the much easier to handle LGA (Land Grid Array) because of the large number of required (1718) pins. After we had already published three articles around Intel’s socket LGA-1700 and there were various problems with the bending of socket and CPU and as a consequence also real cooling problems, I will show you today that AMD does many things right (and also better) from the beginning. As a reminder, Intel’s socket problems and our workarounds in advance: 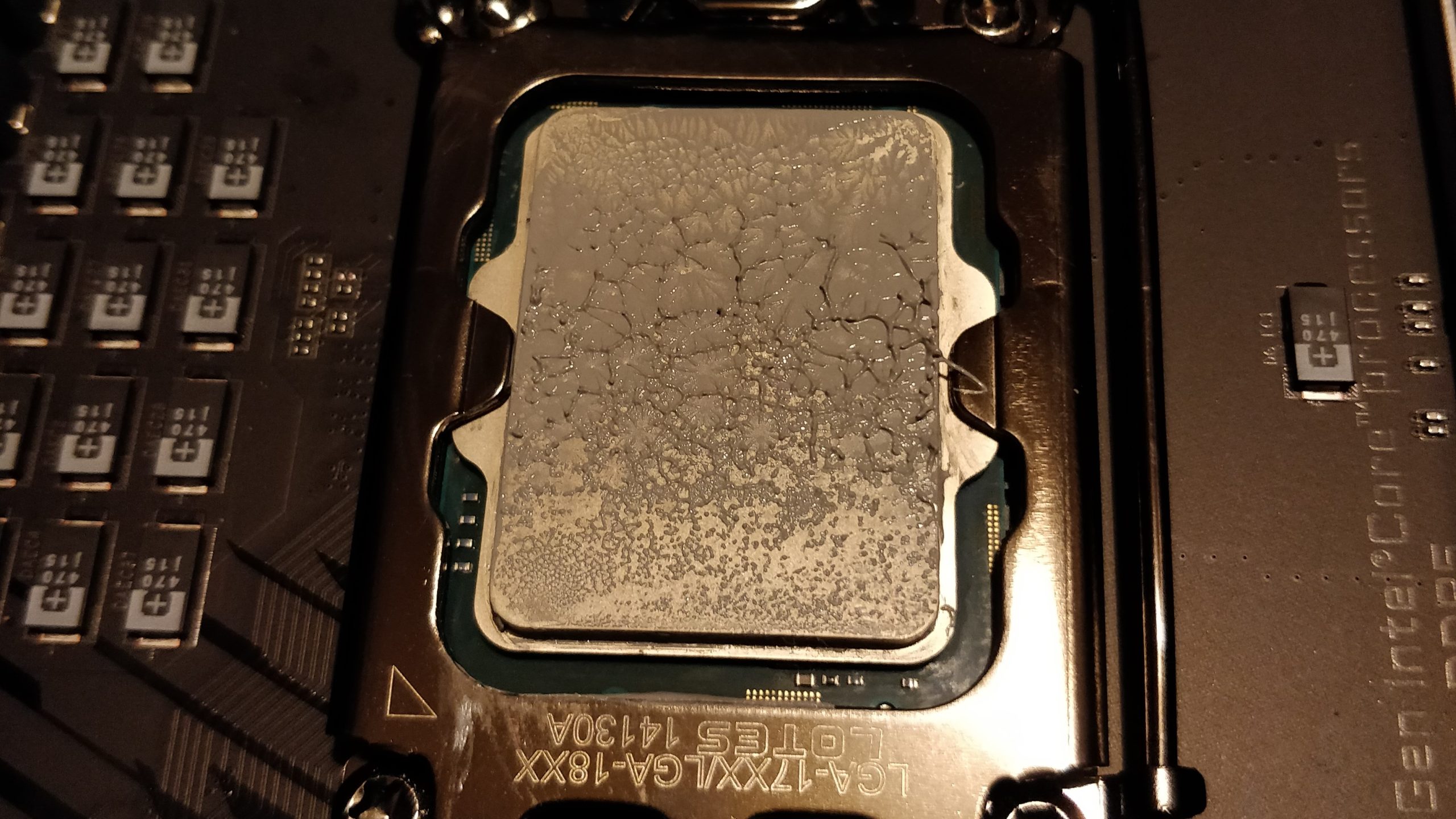 Alder Lake's cooling problem straightened out by 5 degrees! - Simple ILM-Mod for Intel's LGA-1700 socket | Practice
Intel's Alder Lake CPUs run hot, very hot. A few weeks ago, Igor had already identified the bending of the CPU and motherboard due to… 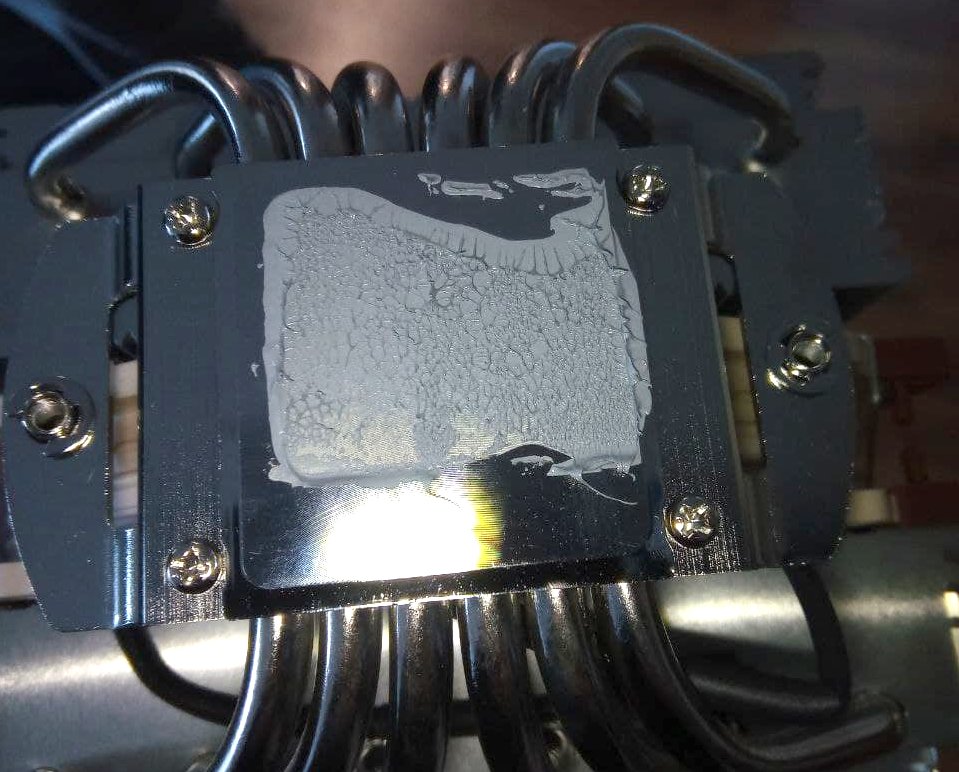 Cooling issues with Intel's Alder Lake - Problems with the LGA-1700 socket and a possible workaround
Badly fitting coolers, too low performance with actually good waterblocks and bent CPUs - meanwhile not only the feedback of the readers is piling up,… 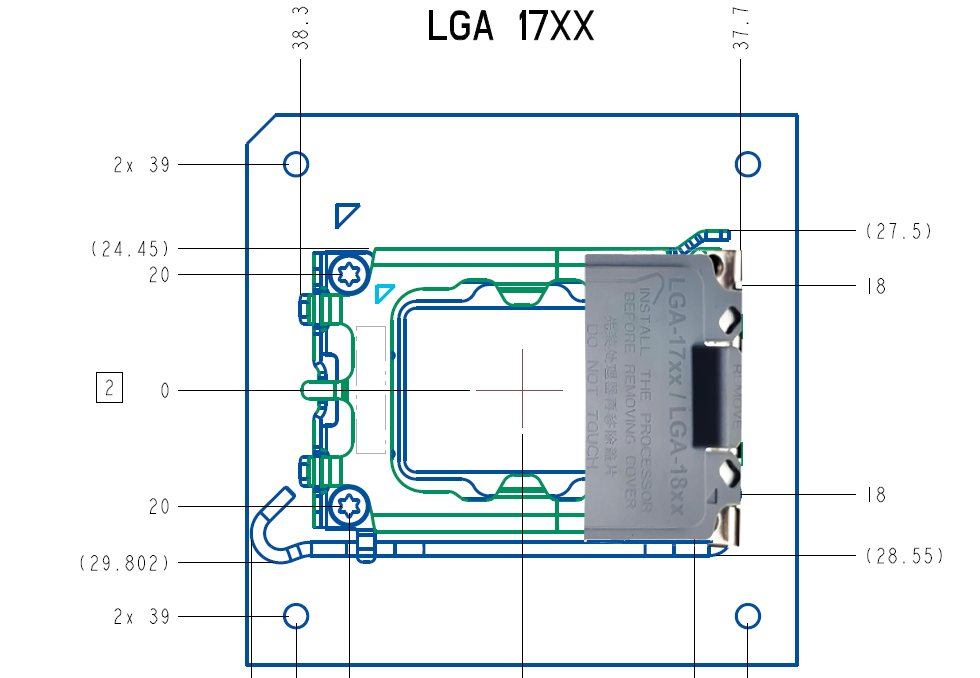 Intel Socket LGA-1700 and LGA-1800 in detail - Exclusive data and drawings for the new CPUs starting with Alder Lake | Leak
Disclaimer: The following article is machine translated from the original German, and has not been edited or checked for errors. Thank you for understanding!

The AM5 v2 socket

Since AMD (in comparison to Intel) has been very fair with me and our medium over the whole years, I will deliberately limit today’s article to rather superficial and obvious things that can already be found in public in a similar form or that can’t cause any damage. Let’s call it live and let live. The complete drawings of the base and the surrounding area, as well as the exact technical specifications, will remain what they currently are: confidential. Nevertheless, the details shown here today are enough to get a first (positive) impression of the upcoming new socket.

At first glance, the locking mechanism with the stiffener frame, the force frame and the lever latch looks very similar to what we also know from Intel’s LGA sockets. The CPU is pressed centrally with two lugs towards the LGA socket, while another lug is hooked into the stiffening frame so that you can then apply pressure to the two central lugs using the lever. 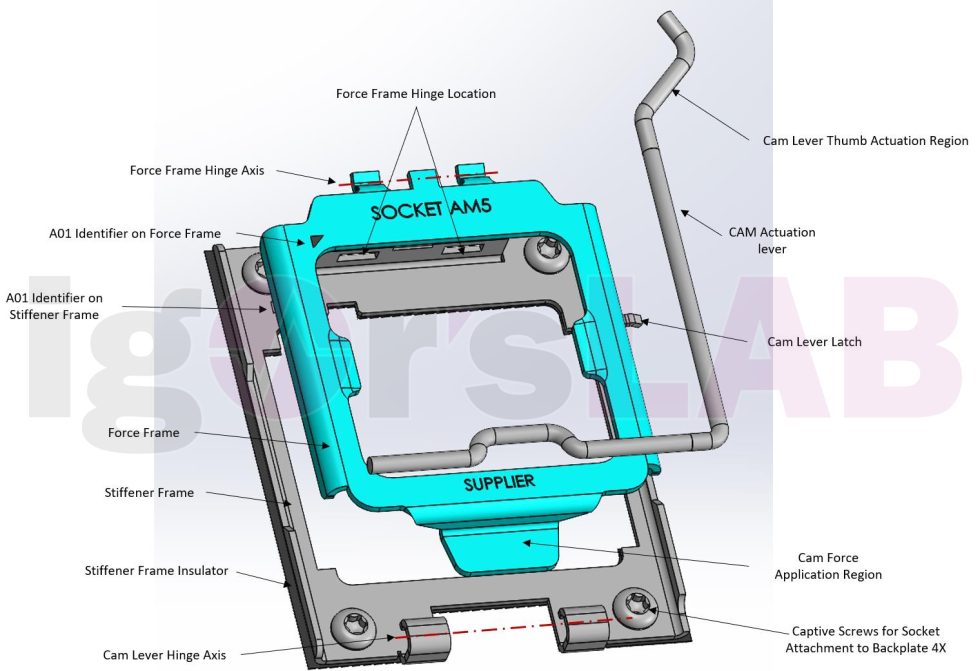 But what is the difference between the two very similar looking sockets? These are important details, which, for example, quite smartly prevent the sagging of the entire plinth structure. Socket AM5 will already use a very similar backplate to Socket AM4 for each motherboard out of the box, where the outer threaded sleeves will again accommodate the front mounting of the cooler. However, four additional threaded sleeves have been added, which are screwed to the socket (SAM) and thus offer a much better hold than Intel’s soft, back-sided plate on the LGA-1700.

The advantage of this solution is obvious, because the acting forces are distributed over a total of 8 different points and also over a significantly larger area. Well done, that’s the way to do it right! The annoying fumbling of the CPU out of the socket casing, where inexperienced fingers often cause irreversible damage to the pins, is significantly reduced by the two recesses for the fingers. These larger lateral recesses also serve somewhat for ventilation, even if one could see the practical use rather questionable. The hobbyist, on the other hand, will be happy because he also gets the chance for the first time to introduce his own, flat temperature sensor below the CPU (of course, only practical, non-conductive and heat-resistant models!) to measure the socket temperature directly on the PCB. 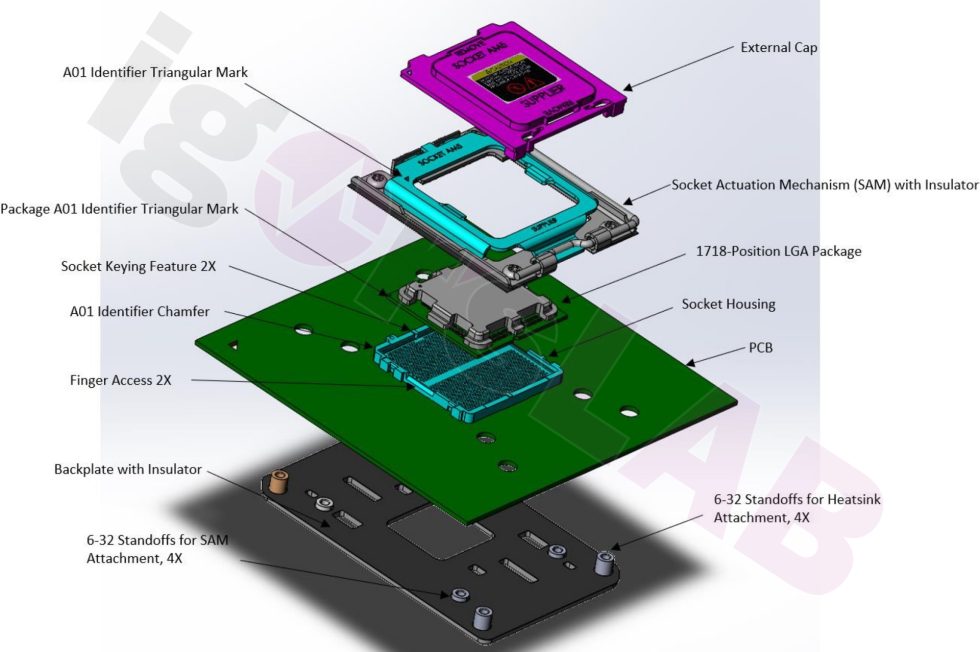 The two mounting points provided by the factory pre-installed mounting kit can securely fix cooling solutions up to 500 grams as before, so not much will change and you will certainly be able to continue using older coolers as well. For anything heavier, the four outer screws including the mounting kit have to be removed and you then have to screw the cooler directly to the backplate. And exactly at this point it becomes problematic with the backwards compatibility!

The new socket AM5 comes with a special backplate whose necessary cutouts differ significantly from those of the older solutions! In addition, the complete retaining system (SAM) is screwed to this backplate. However, these two points definitely rule out the possibility of simply continuing to use existing AM4 coolers with their own backplates. In this case, the manufacturer has to supply adapted backplates, or the pre-screwed part can be used directly.

It will also be interesting to see which motherboard manufacturer, if any, will also tighten up the RMA conditions when it comes to socket removal or removing the original backplate. After all, this no longer makes any real sense, even though it could render many an old cooler worthless. The hurdle here is at least a bit higher than with the Socket AM4, even though you no longer have to hold the backplate after unscrewing the 4 outer screws (or tape it down with power tape) so that it doesn’t immediately disappear into the depths of the case.

Something fits in there: Lian Li Q58 in review – water march in the tightest of spaces!
Alder Lake’s cooling problem straightened out by 5 degrees! – Simple ILM-Mod for Intel’s LGA-1700 socket | Practice