This means that it is already in the approximate, where AMD actually wants to go. While Nvidia has to be careful not to cannibalize its own sister card, the Quadro P6000, AMD does not (currently) have an in-house sister, which can be used with it. With Vega, AMD is now offering a new generation of GPUs that will have received over 200 changes and improvements in the redesign of the architecture. Even if in the end it probably boils down to a kind of new GCN generation: AMD emphasizes that the... Disassembly and radiator details Removing the upper hee cover requires some suitable tools. With a small Torx screwdriver (T5), the six small swivels that hold this cover can be turned out.... Board layout AMD has definitely thought a little bit about the division of the board, especially since the elimination of the external memory modules opens up new possibilities. Exactly in their place you now place the individual power supplies. We... Foreword to the application benchmarks Why we use the Quadro P6000 as a counterpart and not the Titan XP or GeForce GTX 1080 Ti certainly has several reasons, which we have already partially mentioned on the first page. In addition, there is nat... Cheat as you cheat can? It's easy to explain why we've changed our benchmark selection slightly compared to the recently released CPU tests. Since we have to compare several graphics cards from different manufacturers, it falls... Gaming with a "Prosumer" card? Yes, but... AMD itself says that the Radeon Vega Frontier Edition is not an explicitly gaming graphics card, but you can still do so with it. Another problem arises ... Even with DrectX12, we probably can't expect any miracles after the results we have just seen. Should a driver bang give a real boost, then the difference between DirectX11 and Directx12 performance could still be ... DirectX12 and Doom in the window The game Volcano vs. OpenGL 4.5 has been interesting for a long time when it comes to testing Doom. Annoyingly, the Creators Update of Windows again presented us with problems when it comes to the perfor... Power consumption at a glance We measure a value of 14 watts for the card in the idle, which is so okay in view of the scope of performance, even if we had hoped for a little less. But you can really live with that. For the multi-monitor... Temperature curve and clock rate The fan control is quite conservative, so that the maximum temperature of 84°C (short-term also up to 85°C) is reached relatively quickly. But then the card already has approx. 10% of their performance from the cold... Summary There was once a film called "The Great Bluff" - a classic in which you didn't really know who died in whose arms and who gets whom in the end. So either AMD has all enjoyed over a year on the nose ring...

This means that it is already in the approximate, where AMD actually wants to go. While Nvidia has to be careful not to cannibalize its own sister card, the Quadro P6000, AMD does not (currently) have an in-house sister that could be weakened. On the contrary, because AMD is trying quite elegantly to finally fill the gap of the top model in the almost abandoned Radeon Pro series with a suitable model.

Unlike Nvidia's Titan XP, the Vega Frontier Edition relies on the possibility to use the certified Radeon Pro drivers on request, which is the basic requirement for a program start for some software packages. Whether one recognizes oneself in the art word Prosumer, which describes nothing more than a professional consumer, or even comes directly from the workstation corner and would like a blue card of the red faction – the card can or can. should offer it. 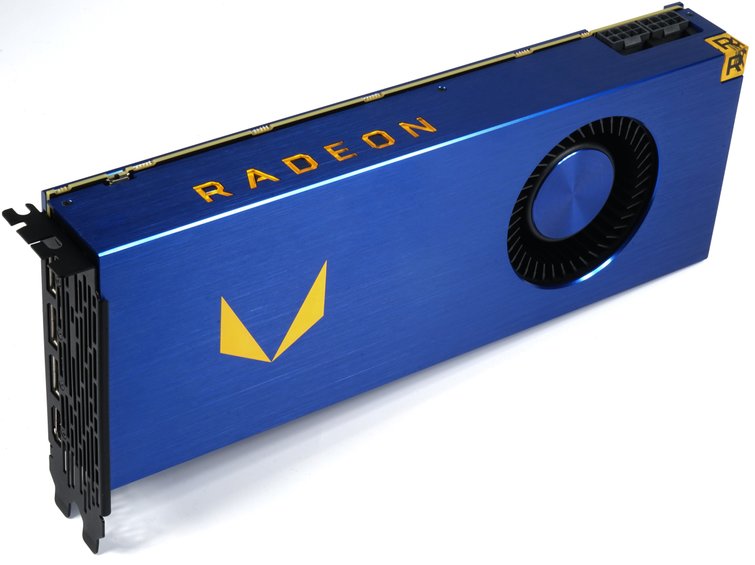 This would elegantly cover everything from the content producer to the typical CAD user. You should be able to play with it, of course. Only that AMD does NOT see the focus here, because for this you will launch RX Vega in the foreseeable future. In terms of price, the gaming offshoot will certainly be able to be offered at a significantly lower price.

Since our focus is not on the games, although we will of course take them with us, we put the Radeon Vega Frontier Edition (simply called FE later) with intent against the significantly more expensive Quadro P6000, which currently costs about three times as much.

First of all, such a comparison has its charm in terms of possible price savings, secondly, we can also test professional software that does not work at all or only runs badly with the Titan XP and thirdly, the game performance of the Quadro P6000 is in the warmed up condition hardly lower than that of the Titan XP.  Because if we're honest, we have to stand out from the reviews that have already been published. That's why we have given the technical aspect up to the board considerably more space.

The housing cover and backplate are made of blue anodized aluminium, which is valuable and cool. All screws are painted matt black. Only the printed Radeon symbol stands out in colour. AMD also follows the color scheme of the current Radeon Pro series with the WX cards, where this blue is much darker and stronger.

The top is characterized by the two 8-pin PCIe clamping supply connectors, as well as the yellow Radeon logo in the form of an acrylic cube, which is encased in the housing corner.

The end of the card is closed and on the frame you will find the usual holes for mounting workstation cards. The matt black powder-coated slot aperture accommodates three DP connectors and an HDMI 2.0. A DVI-I has been cleverly dispensed with for reasons of flow technology, because the aperture is at the same time the outlet of the warm exhaust air from the cooling system.