Based on an expert opinion I created for PayPal, the service provider has now decided in favor of the bruised buyer and has already transferred the money back. As long as you can prove everything cleanly, the buyer protection is quite useful, as long as you follow the most important rules, which I also describe below in the original article again. Documentation and witnesses, then almost nothing can go wrong. 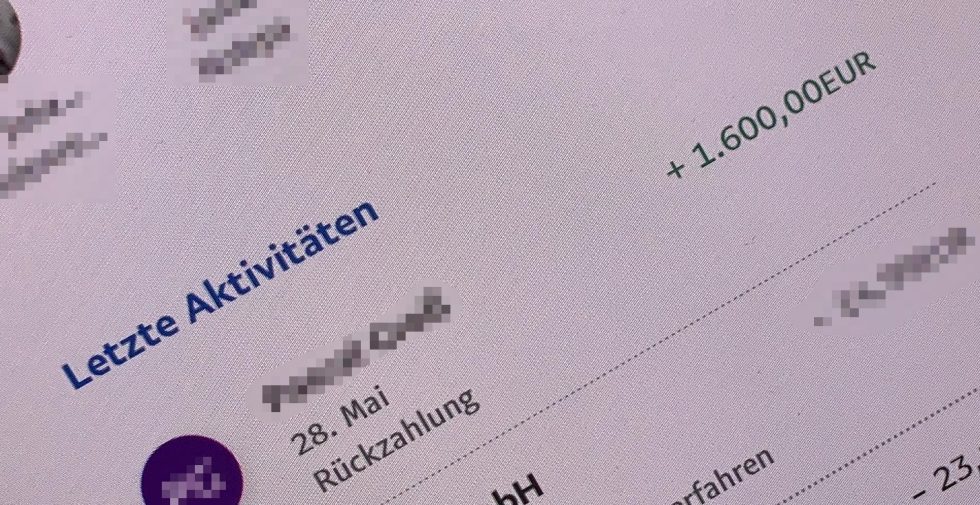 I must make one important preliminary remark in this very special case, which was recently brought to my attention, and in which I did not refuse my assistance. Even if I have taken over the detailed appraisal here free of charge, I am neither qualified legal counsel, nor do I have to judge the guilt or possible legal offences of third parties. For this purpose, in case of doubt, there are lawyers. But you don’t even have to let it get that far, with a little luck and sense, if you pay attention to a few little things that could end up being so important.

What happened? A supposedly lucky buyer purchased two GeForce RTX 2080 Ti with water block via Facebook Marketplace. After all, 1600 Euro for two used cards (Asus RTX 2080 Ti Dual, Asus RTX 2080 Ti Turbo) is a lot of money, but if they would still work and the two waterblocks would be mounted professionally, it would be quite a common offer in this day and age. However, an Asus GeForce RTX 2080 Ti Dual and a cheap OEM card from an Alienware PC (Dell) were delivered. I deliberately edited the conversation together and depersonalized it, privacy takes precedence. In the end, it’s all about a brief overview before I get to the actual topic.

Both cards were no longer usable, however the buyer was smart enough to handle it all through PayPal and use buyer protection. This point needs to be emphasized again. Also as a seller, before sending such a shipment, you should make a clear documentation of the goods, necessarily also with a witness. The same applies to the buyer, who opens such a shipment best with witnesses and immediately documents the contents. In this case, that’s exactly what probably helped the buyer quite a bit, even if PayPal still insists on an appraisal by a qualified person, which is understandable. Otherwise, anyone could come. This is where I come into play instead, because I took over this part (for once!).

I would ask that you do not overly bombard me with such things now as a result of the article, because it is a one-time concession to the community and the case is also very clear. If there are similar cases, I am of course always open, but I would like to point out that my time resources are very limited. PayPal, whether you like the service or not, can be a viable option to cover yourself with buyer protection, however. That is why I use this myself in this form.

First, I have to preface this by saying that both GeForce RTX 2080 Ti are definitely affected by a capital water damage, which completely limits the functionality in total and must have happened before shipping. Thus, both flooded maps are irreparable total losses, which I would like to explain in detail. Especially since traces of an attempted rescue by means of water could be found, which in turn indicates that the seller knew exactly what kind of damage he had caused.

The first damage, already visible and recorded from the outside, is an entry of the purple coloured liquid between the terminal of the water block and the circuit board in the area of the upper accumulators, well recognizable by the coloured heat conducting pads, which thermally connect the accumulator to the water block. 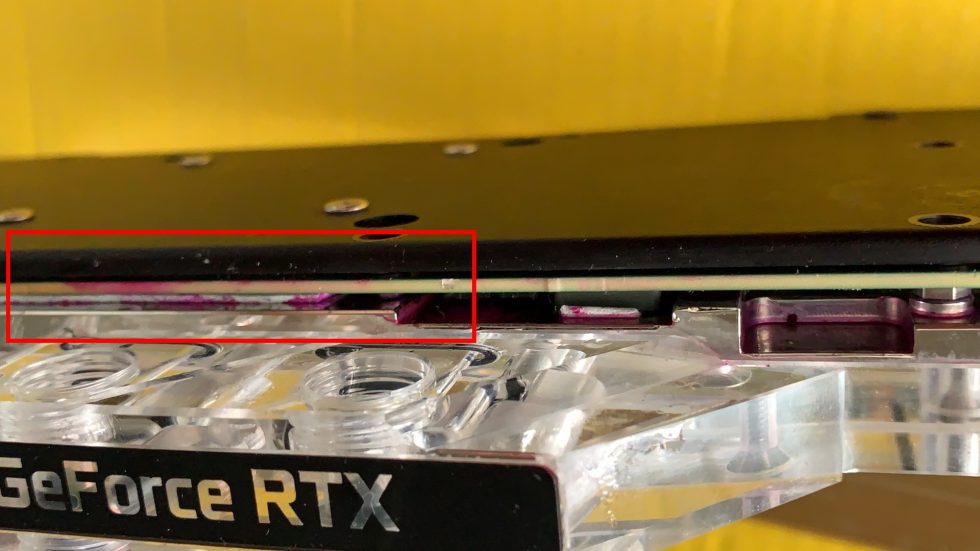 Traces of a second liquid can still be seen on the acrylic of the water block which was then dismantled, although it should be noted that distilled water alone cannot cause such traces. It can be assumed that in the worst case here, rinsing with tap water was used to remove the dyed pastel liquid. Even if the cards were dried off later, enough residual liquid naturally remains in many hidden places inside to leak out during later transport and to then result in such a damage pattern when drying out. 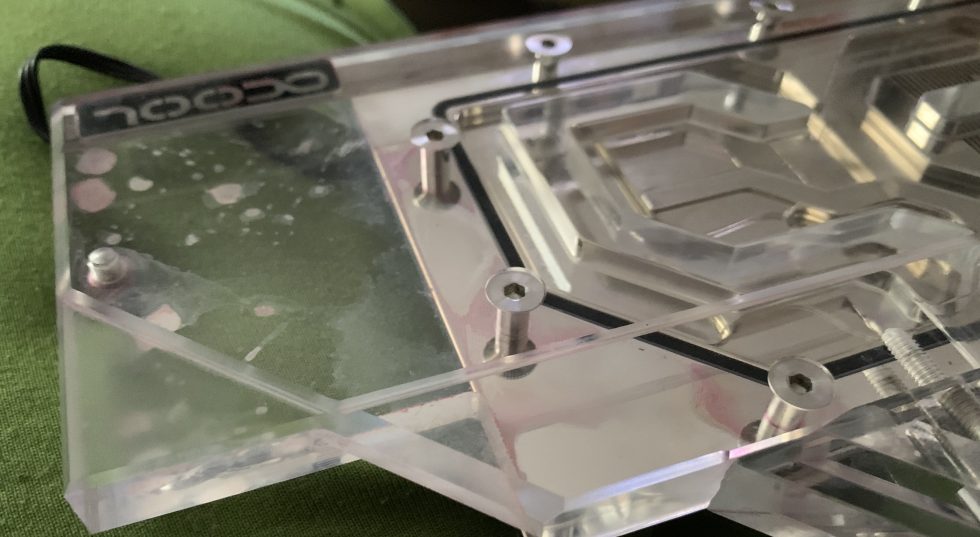 The fact that the cards were improperly cleaned with a completely unsuitable liquid (most likely even under pressure) is shown by the residual traces on the dismantled cooler. The marked area is the raised cooling area of the PWM controller of the power supply of the memory, which is also provided with a thermal pad directly on this circuit. You can even see very clearly through remaining debris and the course, in which direction was flushed. 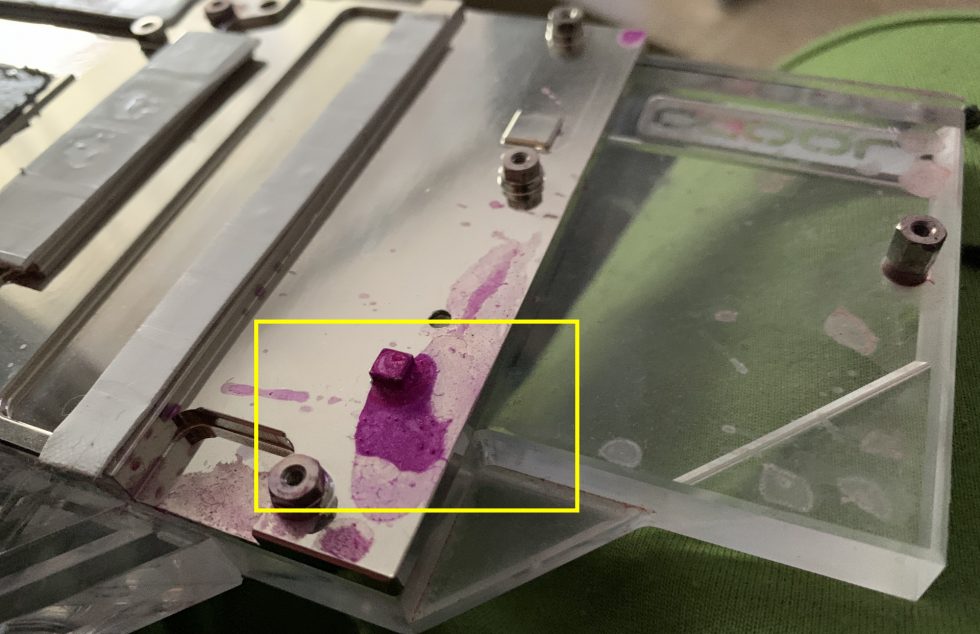 In the next picture you can see very well the counterpart in the form of the affected PWM circuit, on which there are even remains of the leaked coolant. Since such liquids are also slightly electrically conductive, one can assume at least a fine circuit of the external 12-volt line (sockets on the right) and the areas around the controller at this point. The stains on the sockets and the circuit board are the result of coolant residues and the used water that dried up later, as well as the damaged protective coating of the circuit board 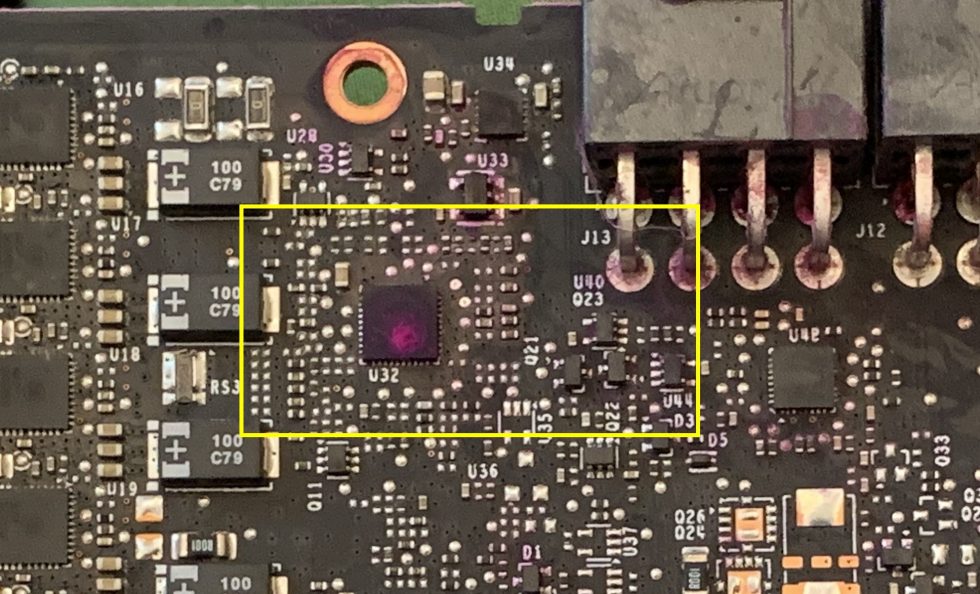 Another reason for the total failure of the card is the flooding of the highly sensitive area under the BGA of the graphics chip. You can even see with the naked eye the colored residue of the liquid that has entered in the area of the MLCC support capacitors. 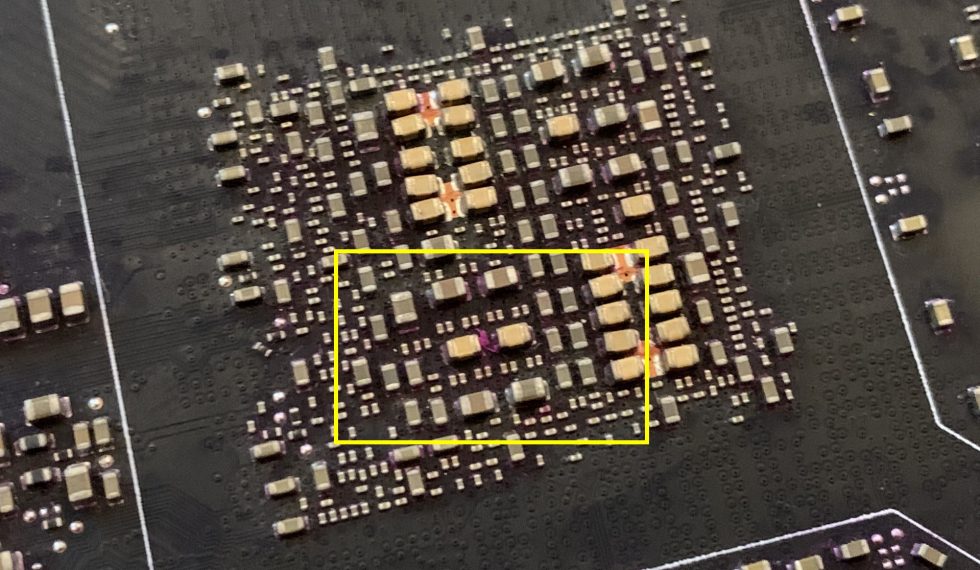 This could be cleaned again at great expense, but any cleaning would further damage or completely destroy the applied tropicalization (acrylic-based protective coating against environmental influences such as humidity, etc.). The fact that this layer has already been partially irreparably damaged can be seen here again from the dark areas. The extent to which fine connections and component damage have already occurred can also no longer be checked in the current state, as commissioning for measurement is no longer possible. 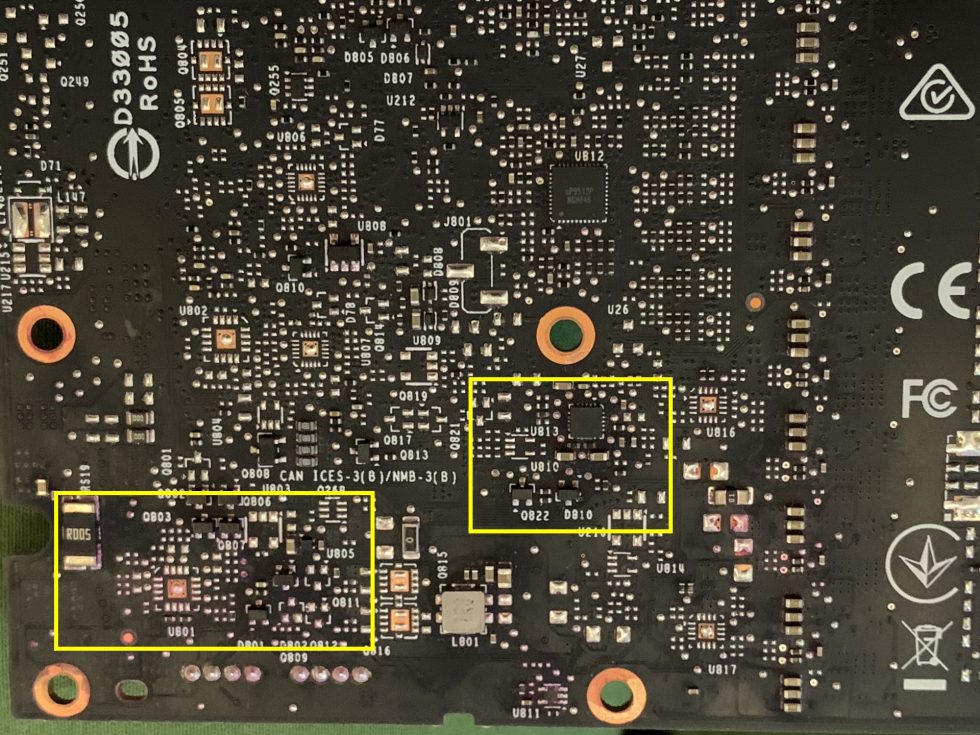 The last picture also documents the fraud attempt to sell a cheap OEM card as branded goods (Asus). The so-called UL number (E203413) printed on the board refers to Micro-Star International Co Ltd (MSI for short) as the manufacturer of this graphics card, as it is often used in SI products (in this case in a finished PC from e.g. Dell, who also like to use MSI motherboards). You can also see on the PCIe slot the irreversible damage to the data lines of the lanes at the end of the slot. Since also here the lacquer finish of the circuit board looks very attacked, already this would be a complete total loss, since it happened in a very sensitive area (data transmission to the motherboard) and also long-term damages are not to be excluded. 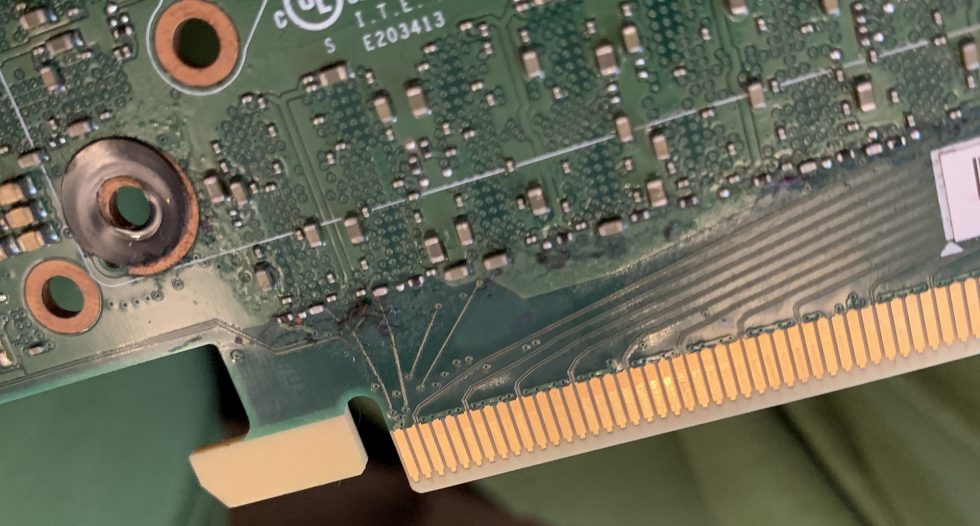 What should you do if you suffer water damage yourself?

Second-hand goods in the marketplaces of social networks can by chance and with a little luck be a bargain, no question. But even with higher-priced, serious-looking offers, the devil can be in the details, as is the case here. Because there a bloody layman has aggravated his damage by improper cleaning attempts and afterwards sold the whole thing as functional with full knowledge of the circumstances. In addition to that, they tried to sell a cheap OEM card as a branded product, whereas the OVP can’t match the packaged product that way either. This kind of thing doesn’t happen by accident, either, but with the fullest intent.

I am not a judge or investigator and therefore will not pass judgment on the seller, because I cannot and am not allowed to. But the whole circumstances point quite clearly to the fact that it did not go here with right things and I can only hope that PayPal recognizes the appraisal provided by me separately contentwise also fully in the sense of the bounced buyer and activates the buyer protection. The rest is up to each person to figure out for themselves and their conscience. If he even has one left. Update to follow.

Murphy at its best!