The large RX 6900XT will be AMD exclusive according to AMD’s own statements (“This card will be (for now) AMD exclusive. The Radeon RX 6900XT will be the AMD flagship series, which according to our sources will be in limited quantity”) probably first an item for the gallery, just like the Titan RTX. The GeForce RTX 2080 Ti, which even came quite close to a Titan RTX with a lot of OC, had to set the tone.  The parallels are interesting, because AMD’s Big Navi in the form of the RX 6900XT will have 80 compute units (5120 stream processors), the next smaller RX 6800XT will have 72 (4608 stream processors). Both cards will be equipped with 16 GB GDDR6 connected to a 256-bit wide memory interface.

And, as with the GeForce RTX 2080 Ti, it’s especially the board partner cards with a decent factory OC that get into the gamers’ focus. Yesterday I already had a suitable article about power consumption, today I will give you some first insights into the possible factory specifications and the limits of the Wattman, as the end user can and will find them. The values shown below are taken from a rather above-average board partner card and are on the one hand certainly exemplary, but on the other hand must be considered with the reservation of possible changes. The used BIOS came from Patrick Schur.

AMD Radeon RX 6000 – The actual power consumption of Navi21 XT and Navi21 XL, the memory and the availability of the board partner cards

Out of respect for the launch event planned for 28.10.2020, everyone will of course understand that a website does not want to mutate into a spoilsport. Therefore, some information is intentionally not included in the article and I will not (cannot) make a performance forecast here and now. However, if you are a battle-tested AMD end user and already have the relevant experience with Wattman and our optimization aid in the form of the MorePowerTool (thanks to Hellm for the nimble implementation), you can calculate the percentage power reserves quite plausibly.

But let’s get down to business. First of all it is reassuring that with the SoftPowerPlayTables obviously everything is still correct, even if AMD has slightly changed the BIOS structure, the eye of the programmer is sharpened and incorruptible. Ergo the Wattman may be optimized and the designated features may be modified. The recreational overclocker will be pleased, but I can already say in advance that we will not (as before) release extreme values that could contribute to the potential destruction of the hardware. Here we will reserve the right to test the limits again after our own initial tests. An LN2 version is certainly planned, but nothing for the general public. 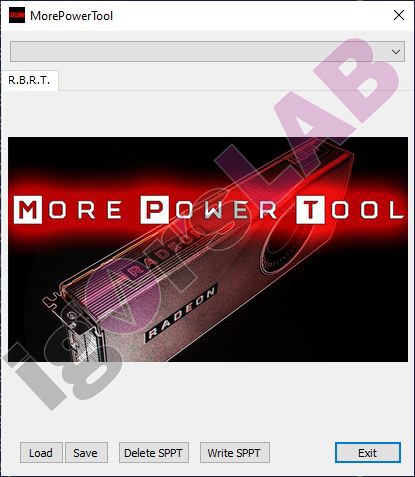 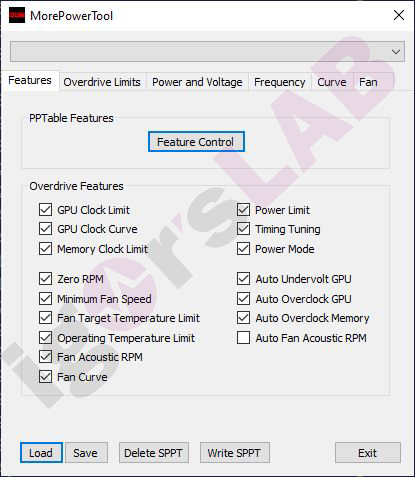 Let us now first have a look at the maximum specifications for the Wattman (Overdrive Limits). These are the respective minimum and maximum values for the individual controllers or the activation of individual functions. You can tell, for example,that with this already factory overclocked card an increase of the power limit for the GPU (“socket power”, VDDCR_GFX + VDDCR_SOC + VDDCI) is only possible by a maximum of 15%. We will remember this value for once. The clock settings of maximum 2800 MHz certainly look nice, but are far from LN2-free reality. The remaining specifications are self-explanatory.

More important is at the end, where AMD or the onboard partner has set the sliders for the end customer. 1.15 Volts for the voltage are already quite high and it will be interesting to see if and where the AMD software has a safety lock built in, because exactly this is what we can (within the scope of what makes sense) raise with the tool. The same applies to the SOC value. The power limit for the socket.Power is already at 255 watts. If you add the maximum allowed 15% (without MPT intervention), you end up at 293 watts. That would be plus memory up to 315 watts plus the rest (partial voltages, converter and board losses, fans etc.). Whoever raises this, certainly does not need a separate heater any more, as with the RTX 3080 and 3090 OC.

The maximum allowable currents (TDC limit) are also no unknown in the coordinate system and so the experienced user can optimize his own card quite neatly (or execute it in an exuberant way). But I already wrote that we will build in appropriate limits of reason. Just out of respect for the silicon. 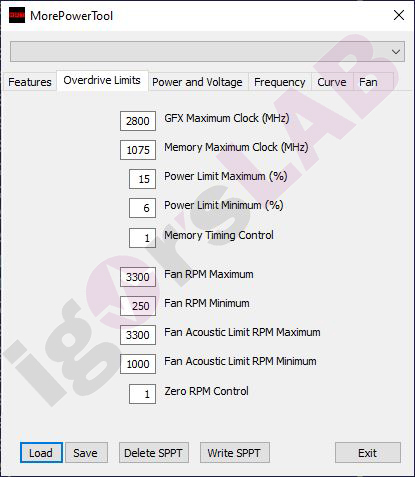 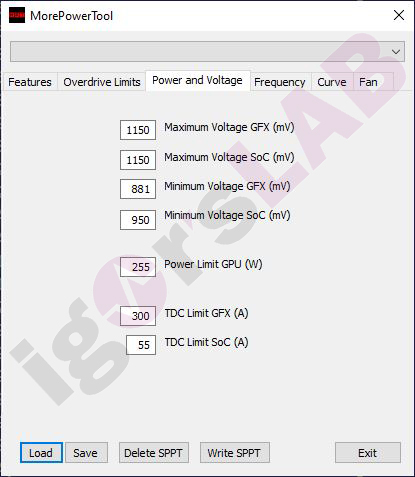 This very special board partner card sets the GPU clock to 2.577 MHz. If one converts this into the experiences with Navi10, then temporarily still approx. 2.3 to 2.4 GHz maximum “boost” clock should remain. Real under load this could still be between 2.1 and 2.3 GHz “gaming” clock. Depending on cooling and load scenario. Although this is still quite speculative, it is quite plausible. We already know the DPM states for the memory and it will also be an important task to make the timings editable in the Red BIOS Editor (RBE).

The values of the fan control tell us that AMD again locates the hotspot at 95°C, at least in regards to the fan control. It should be quite similar to the one of Navi, which is not very nice, but can not be changed. We can only hope that there won’t be software problems with some of our board partners again, which caused some irritations with Navi10 cards. The rest is self-explanatory and also depends on the board partner and the installed fans. 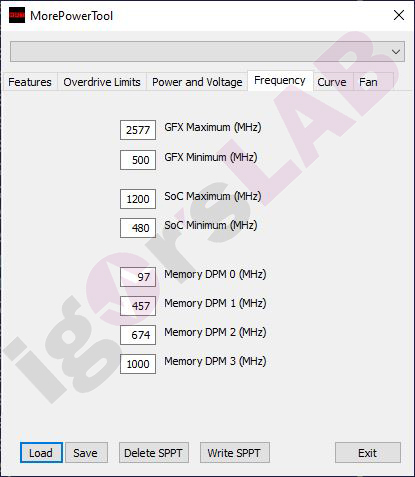 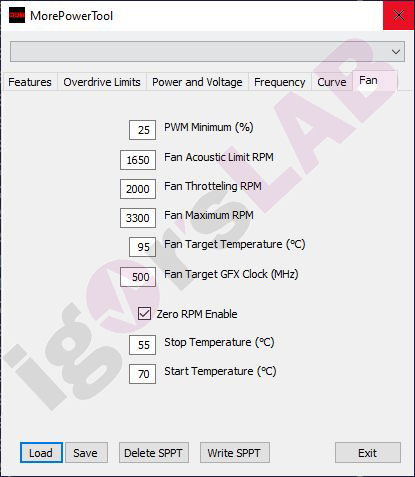 We are done with that again, I can’t and don’t want to publish more. I have already mentioned the reasons. So the performance test will not be available until the launch day, one way or another. It’s all about anticipation… Well, you know. 🙂