The comfortable thing for the tester is the brevity that this very unproblematic structure demands of one and which is then also reflected in the necessary text. The screws should be tightened diagonally alternating. They have stoppers due to the precisely adapted thread end. The last, still freely measurable torque was 0.6 Nm. This is a bit more than with the extremely lightly mounted Heatkiller IV but less than AMD’s maximum allowed. If you don’t like the included one-way wrench, just take a proper bit insert, that will also protect the screw heads.

The screws and spring disappear (almost) completely in the body, also depending on the board thickness of the motherboard. By the way, you could even use the original AMD backplate, because the threads and heights of the sleeves are identical. Again, please pay attention to the installation direction and the injection directly to the dies.

The distance between inlet and outlet is approx. 29 mm. But here you have to be careful with 90 degree angles. Compared to the EKWB cooler, the fittings can be screwed in as soft as butter, where a slightly frayed neck contrasts with the extremely high price and also gets in the way. At some point, however, the thread caught on there as well. In general, the overall impression of quality is significantly better than that of a 240-euro plus premium cooler. 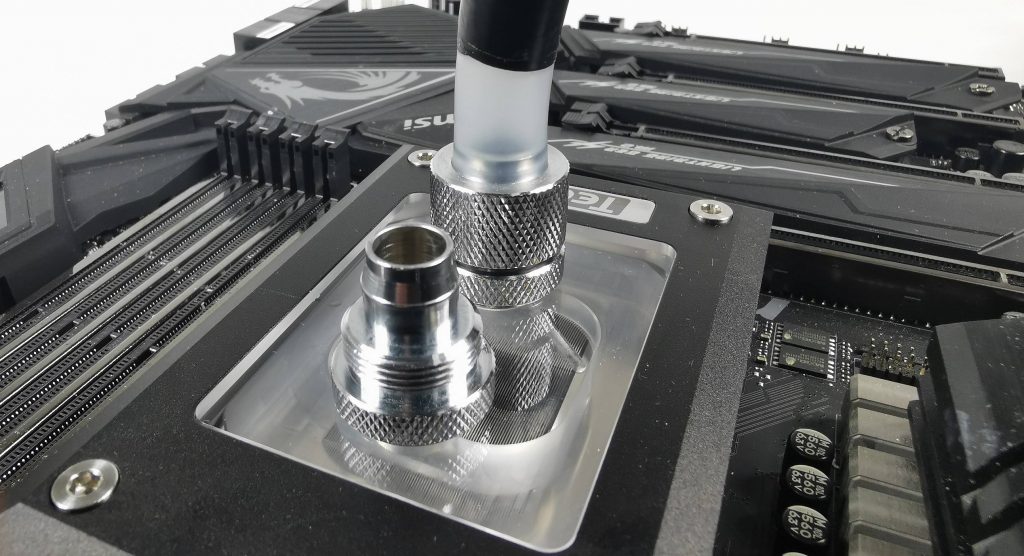 The base plate is fixed with 4 stainless steel countersunk screws. Again hexagon socket, but one size smaller. The EPDM seal adapts relatively cleanly to all shapes and still seals tightly even after being dismantled several times. I can of course judge it badly without long-term measurements, but for my taste it is very far out.

You know, like everyone else, I’m currently completely overloaded with NVIDIA’s graphics cards, but I still found time for some very elaborate test runs, which, apart from the start and the modifications, can run more or less independently for hours. Nevertheless, I decided to set the only water temperature at 20 °C. Since I only use clean, distilled water in the test system (Britta-filtered once a week), the viscosities are also the same. In the case of additives, the viscosity rises sharply with falling temperatures and the flow rate decreases rapidly as a result.

Furthermore, there was simply no time to test various flow rates against each other. The pressure drop is slightly higher than that of the Heatkiller VI Pro at the same inlet pressure, but one remains factually comparable, the EKWB cooler is the world champion in terms of flow rate due to the very large channel spacing, but one will notice the disadvantage later. That’s exactly why I decided to use a rather sporty 170 l/h for each cooler to cool a Ryzen 9 3900X at a fixed preset 150 watt package power. This time I used the Alphacool Subzero for the first time as a heat-conducting paste, because unfortunately I noticed very variable qualities between the individual Kryonaut tubes, which made a difference of more than 1 degree. This needs to be clarified first. 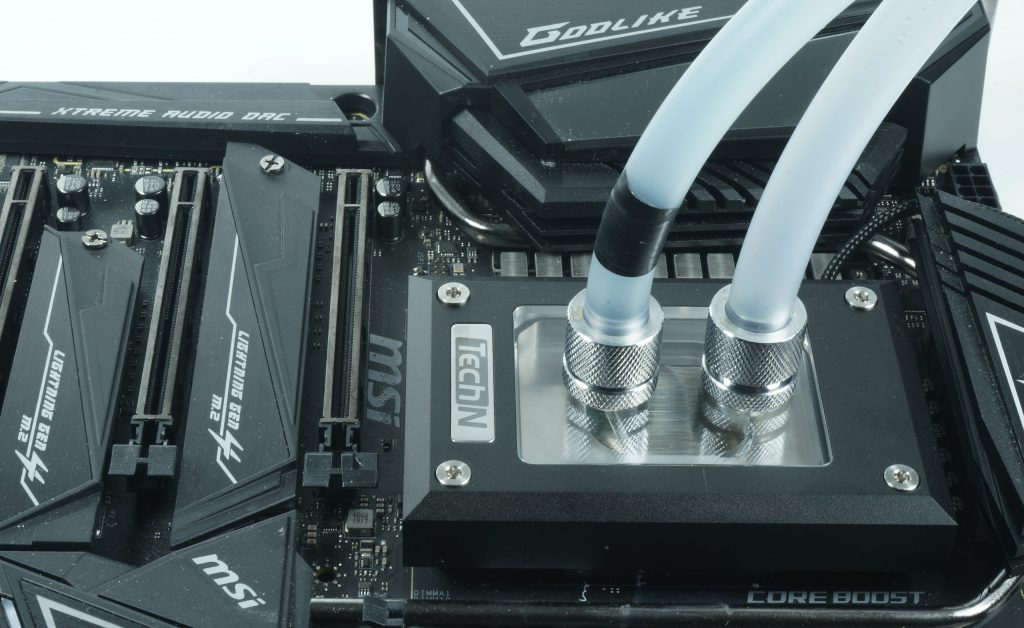 If, however, coolers can be so close together, such a difference would be the end of any serious measurement. By the way, as always, I tested the plausibility with a blob of Liqui Moly silicone grease, which is very heat-resistant and shows no differences at all. Cooling is done as always with the Chiller and, in addition to the approx. 9 litres in the original circuit, with an additional 20 litre expansion tank.

I run all three coolers with an identical package power and only start recording when nothing more significant changes. Each cooler has to run through a total of 5 runs of 60 minutes each, with each run having 15 minutes to warm up. My neighbours may forgive me and the chiller, which is now already standing on a bubble of air. But the 5 runs with a complete mount (assembly and disassembly) were important to me, because especially the two blocks of TechN and Watercool were so close together. In order to be able to prove a half Kelvin difference reliably, 2-3 longer series of measurements may be sufficient, but one does not feel comfortable with it. The Δ of the CPU package temperature in °C to stabilized water with 20 °C looks like this: 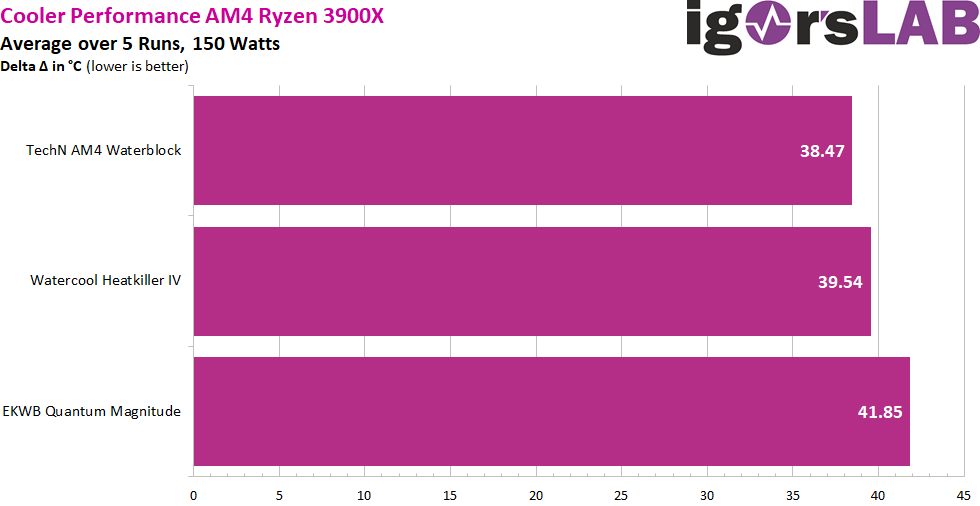 The distances are small, but clearly reproducible. This is also illustrated by the averaged curves from the 5 runs over 60 minutes each: 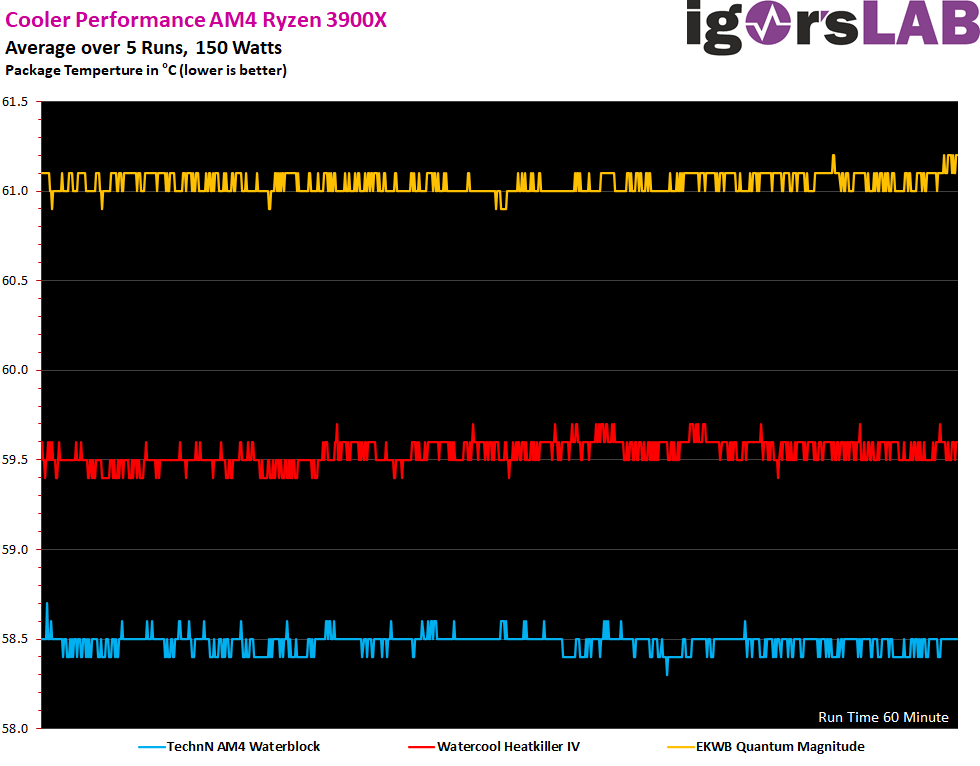 It has certainly been a question of time to find a really objective and comprehensive result. All three coolers do exactly what they are supposed to do, namely cooling. Surprisingly, the most expensive block in the test is even the worst, if you want to use the word here at all. The 2.4 degrees to TechN’s water block are a small house number in the high-end sector, if you still have the price of 240 Euros in mind, though, so the EKWB Quantum Magnitude costs 2.4 times as much as TechN’s AM4 water block and even almost four times as much as Watercool’s Heatkiller IV.

The AM4 water block from TechN is good, which can also be seen in the test results and the subjective user experience in terms of optics and haptics. What is still missing is proof of long-term constancy, which cannot be provided by such a test, however. The materials used, however, do not suggest otherwise and the workmanship including all the gaps rather has the charm and luxurious appearance of a very precise small series. Whether and how well that then scales in the mass, the future must show. The genes are right, the product as a total work of art fits the price, even if you take exclusivity into account. Of course, the cooler must first be available in the trade on a large scale in order to be able to speak of a real mass product. 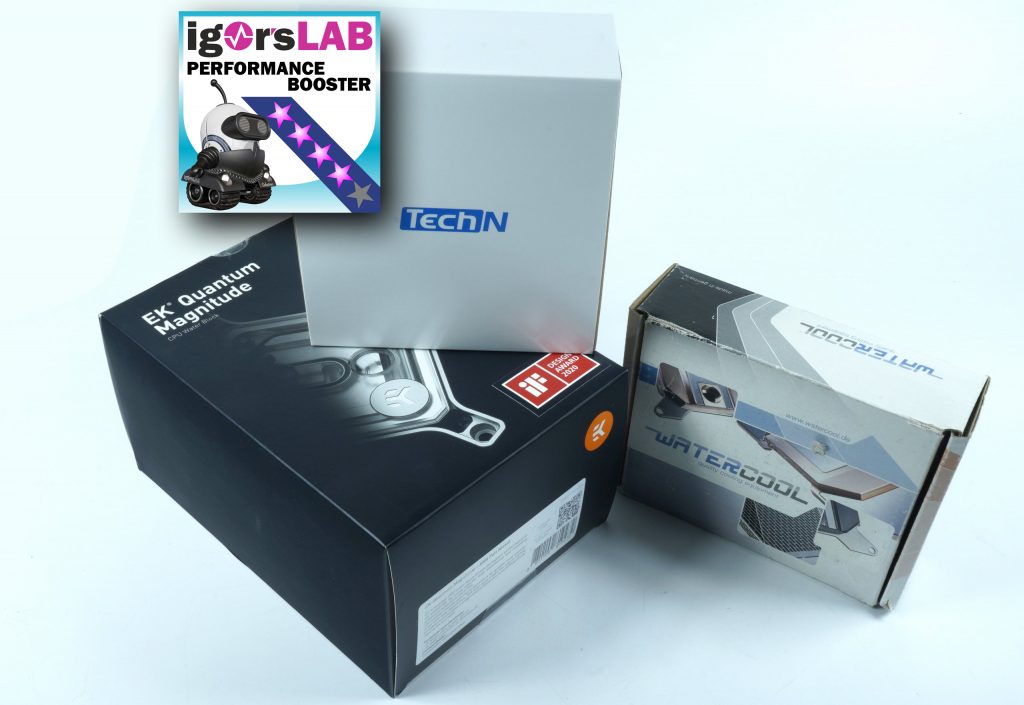 Currently it can already be ordered in the TechN webshop, further shops or distributors are to follow. If there should be imitators here in the forum, I would be glad about your experiences and values, also from the Intel variants, which I could not test myself due to time reasons. And that’s exactly where the manufacturer comes in, confidently challenging you to a reader test. Test a cooler for the AM4, 1151/1200 or 2066 socket yourself!

If you are living in DACH region and want to take part here and now, you are very welcome to do so in the form of a short reader’s test (in German) with picture, text and temperature values. Any interested party (or better challenger) can use the comment function in the linked forum thread. I’m really curious! Applications will be accepted until 31.10.2020, after which the respective tester will be selected by lot. So you should definitely mention the respective pedestal in the mail.