Our community member Gurdi was able to get his hands on a GeForce RTX 3080 just in time for the launch and was kind enough to invest some time to provide you with new insights around this card. Among other things, he also addressed the question of whether and how this new card could be made a little more economical and efficient. This is exactly the question I had asked myself and it is fortunate that Gurdi can now answer it for you. I will now simply leave the word or the next lines of this article to Gurdi… 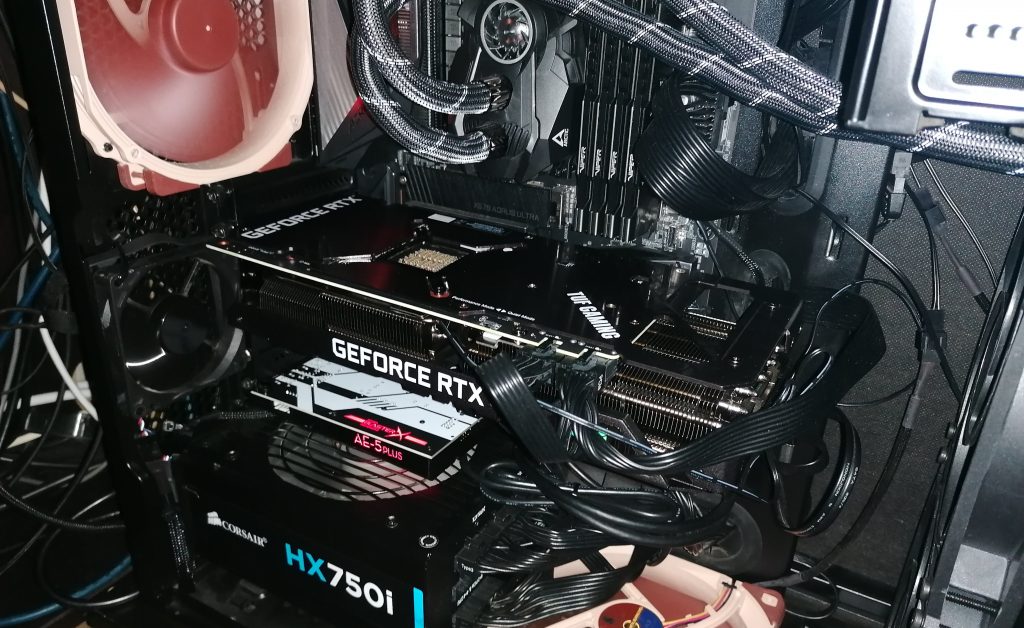 The new Ampere cards are finally on sale and the GeForce RTX 3080 recently celebrated its debut in the series. For the community I made some quick measurements, benchmarks and stability tests so that you have a good basis for your purchase decision or just values as orientation when tweaking. The ASUS TUF RTX 3080 Gaming 10 GB is used as an example, which has really become an outstanding custom model this time. The card feels very valuable all around, the metal shroud is really great and the look is pleasing, but remains unagitated. A discreet LED lighting completes the card and there is also a dual bios with performance/quiet mode. All in all at the current price point (around ~740€) an excellent overall package.

This time the ASUS TUF has really become an excellent custom model, the card feels very valuable all around, the metal shroud is really great and the look is pleasing but unagitated. A discreet LED lighting completes the card and there is also a dual bios with performance/quiet mode. All in all at the price point (around ~740€) an excellent overall package. On that card I got the worst binning, 0. More information about this below.

I had the card without factory -C, so 1710 MHz reference clock and standard power limit of 320 Watt. The cooling capacity of the card is impeccable in view of a whopping 320 watts. 64 degrees in perfect mode and around 71 degrees in quiet mode are achieved. The fans rotate with about 2000 revolutions or in quiet mode with about 1500 revolutions. During longer operation in a closed housing and under high load, however, the speeds may well rise above this. In general a good ventilation of the case as well as a solid power supply is mandatory for the cards of the Ampere series.

Theoretically, the power limit of the card can be increased up to 375 watts, but in practice I couldn’t get the card to use more than 350 watts even with OC. The reasons for this are unknown to me, since the 375 watts are clearly stored in the bios. On the second floor the boost clock rates vary between 1600-1900 MHz, usually the card is around 1820 MHz on average. But the card has one shortcoming, it hangs through a lot when mounted in the slot. Here I would recommend a GPU support or another tinkering solution like fixing with the 12V cables and a cable tie e.g.

There’s not much to add here, the card looks identical, the cooler is identical and there’s not much else going on between the 80s and 90s. Differences can be found in the power limit and the temperature limits in the bios. The power limit here is 350 watts as standard and 375 watts with maximization. Like all Turing cards the ASUS TUF exceeds these limits from time to time (up to 390 watts I have seen) partially. The fan speeds are identical to the 3080’s, only the temperature target has been slightly adjusted.

The card is impressively quiet for what is being discharged here, especially with the Quiet Bios. At the 3090 TUF I got the best binning, 0B is a 2 chip. Accordingly, the card also performs for me and it is even (temporarily) enough for the top ten worldwide in 3D Mark. The card is already booting @ stock under heavy load with an avg. Clock of over 1800 MHz, which is quite remarkable for a 3090 with standard power limit. With overclocking/undervolting, the card really turns up the heat and the good binning pays off. 1785 MHz are unvolted at 793 mv stable including raytracing, closed case and continuous load. This is an absolute peak value for a 3090. Here, the excellent power supply of the card also pays off, which ensures that only 285 watts are drawn on average. Configured in this way, the card mutates into an absolute top product! 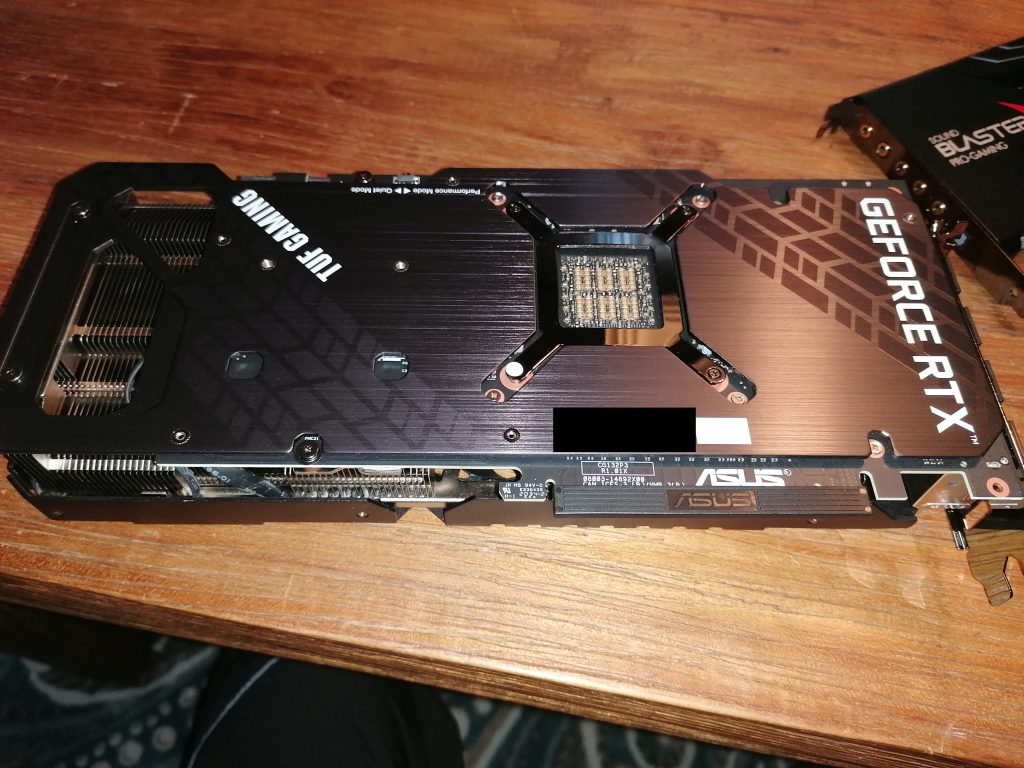 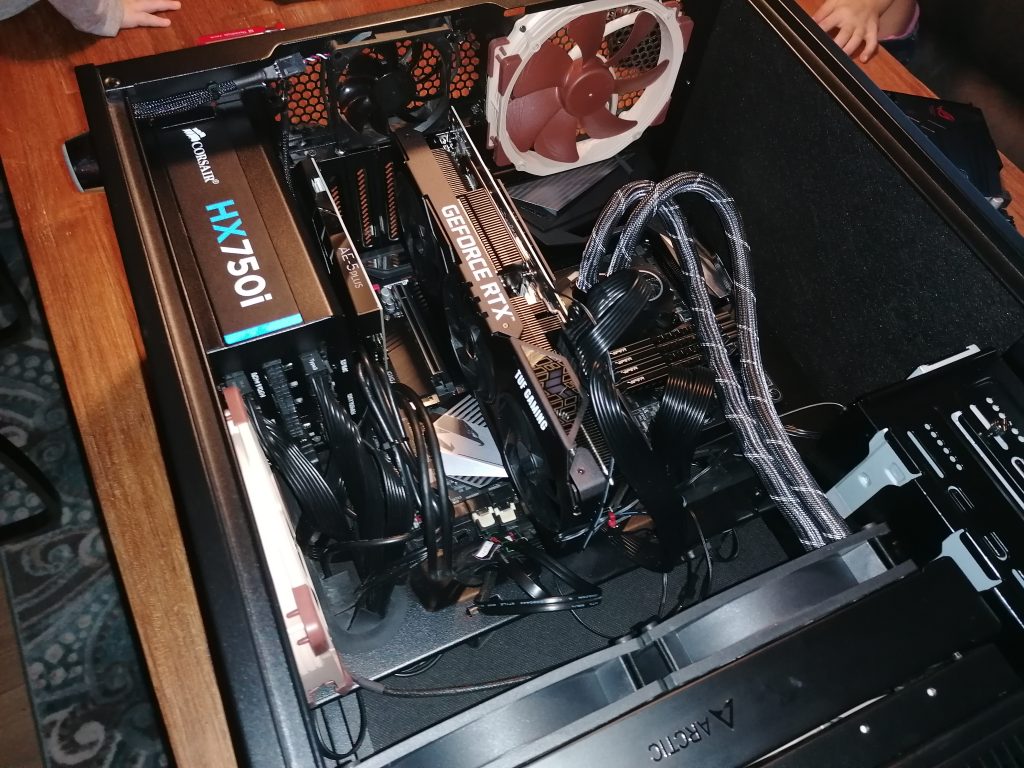 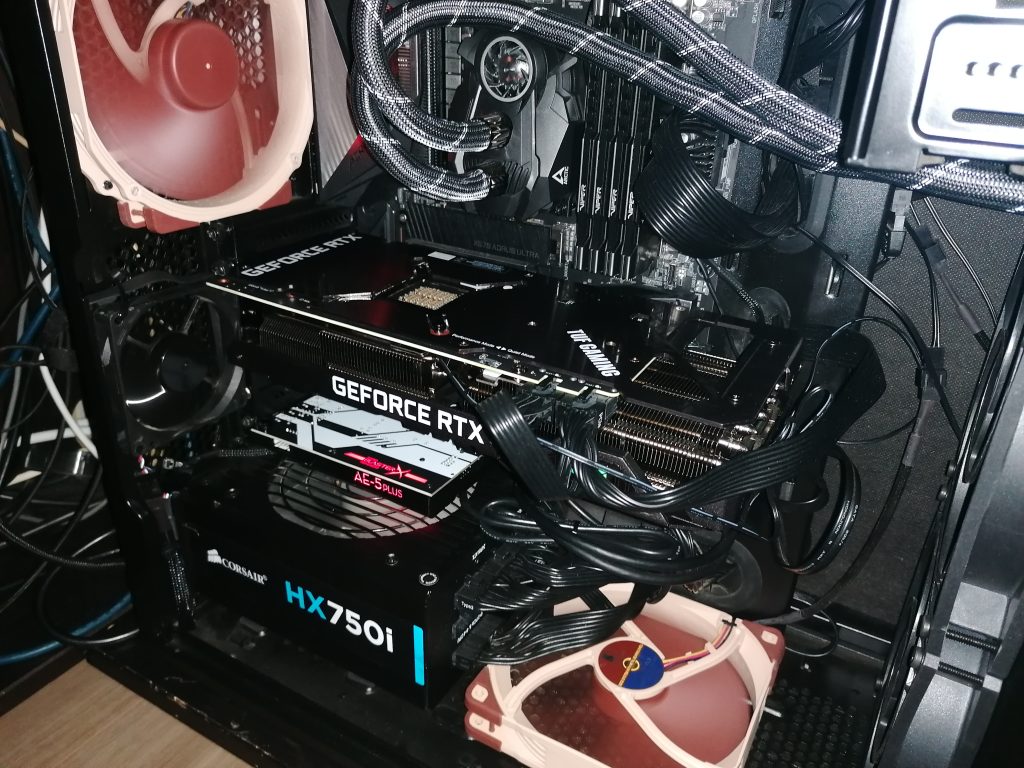 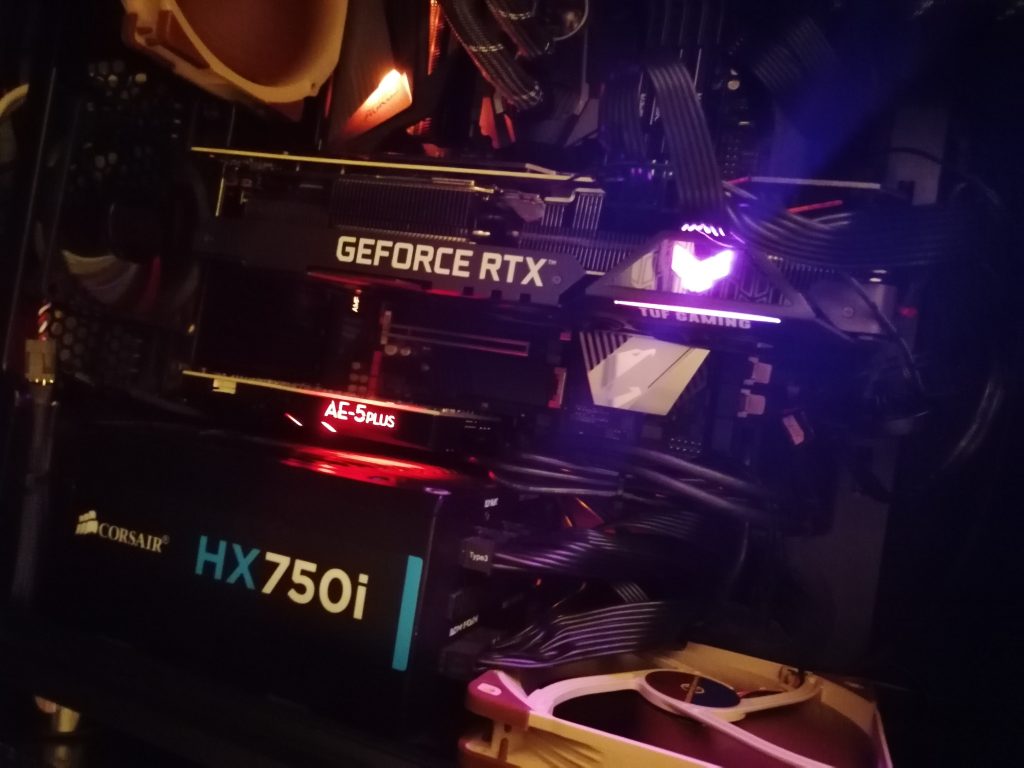 The card generally makes a valuable impression. In contrast to the ASUS TUF, the card also hangs stably in the slot and does not require any further support. The LED lighting is also discreet, but much more successful and chic than at the TUF as I think. The card comes with an offset of +60 MHz compared to the reference card (1755 MHz) and a power limit of 370 watts standard and 390 watts maximized. The card uses SP.CAPS only, but in a massive dimension in terms of capacity.

This is where your case ventilation comes into play, my values are clearly distinguishable from reviews with open construction, the values there are hardly to be kept in a closed case. The Bios of the Gaming OC is currently very popular because the card uses a slightly modified reference board and currently uses the highest power limit of 390 watts max. of the models with reference board. I personally find the continuous backplate chic and fits well into my case. In comparison, the clock behavior of the card is very quiet, which benefits the frametimes. The card usually moves at around 1800-1830 MHz boost without much fluctuation. A great plus, I think. But here you have to consider that the card also has a guta binning, with a potato chip the card boosted much lower. 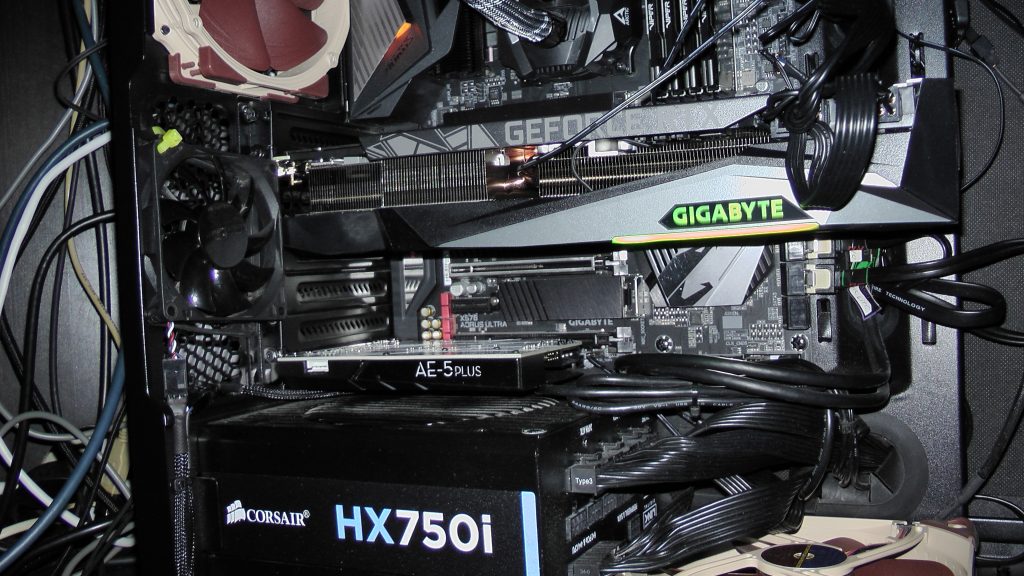 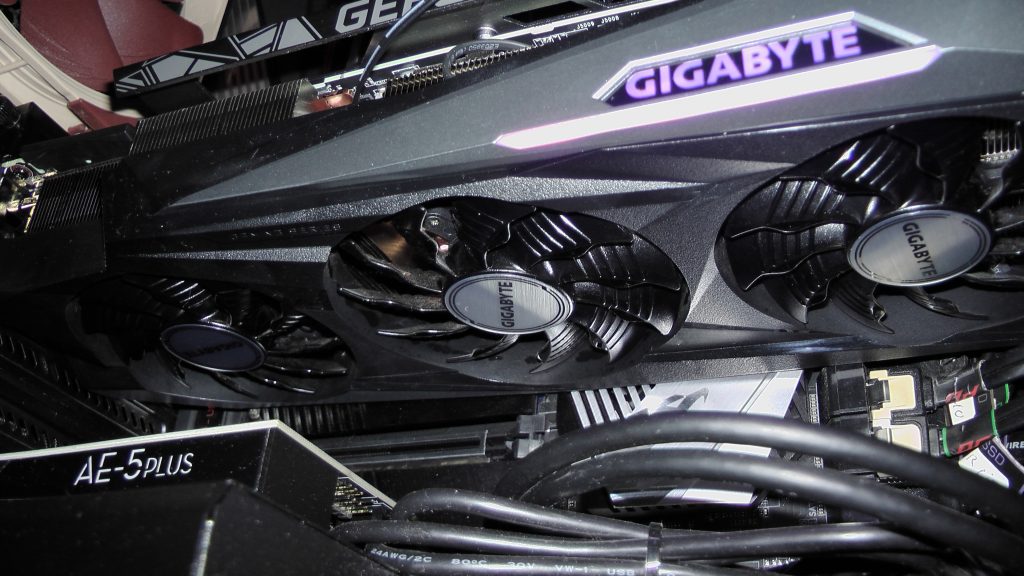 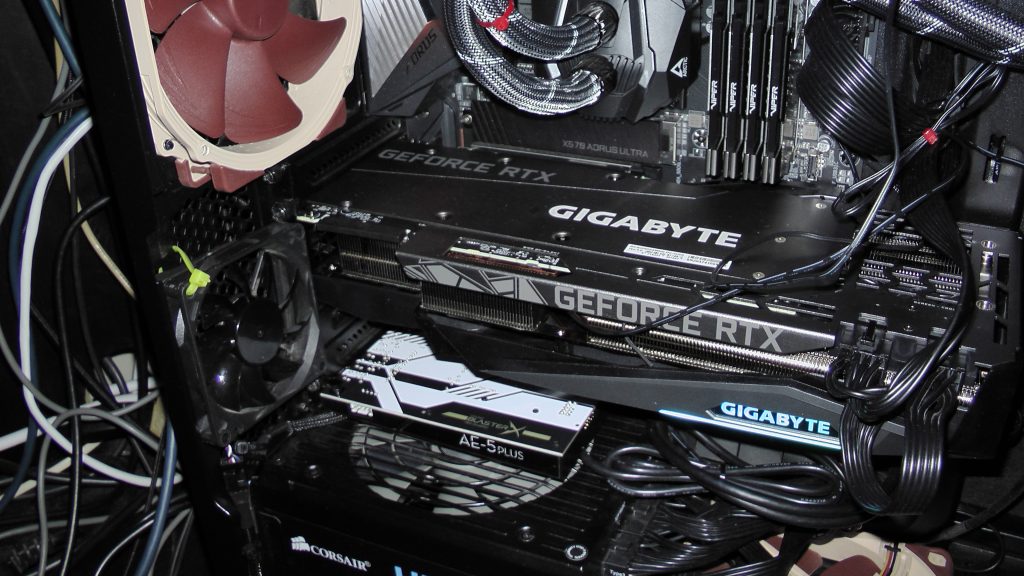 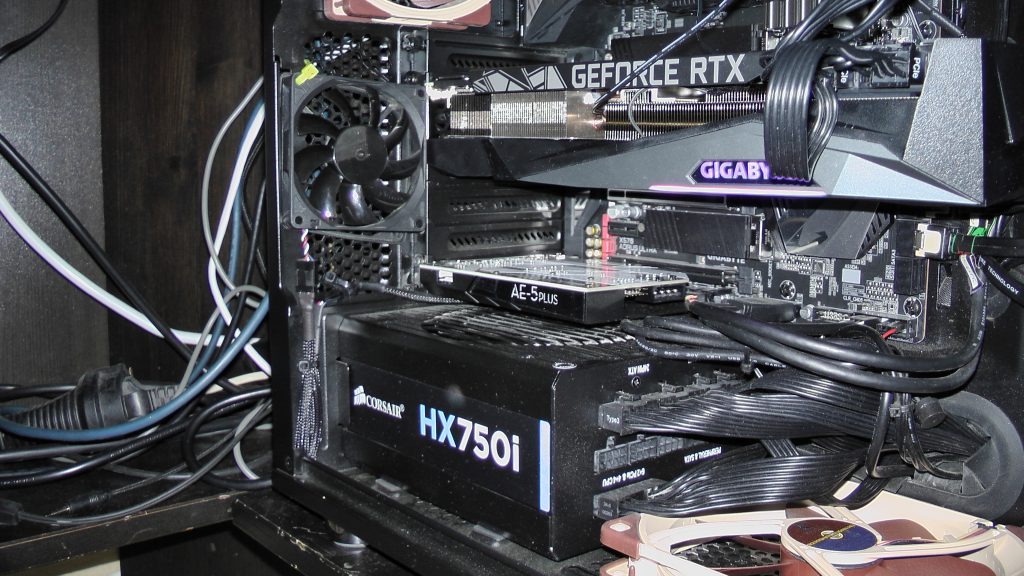 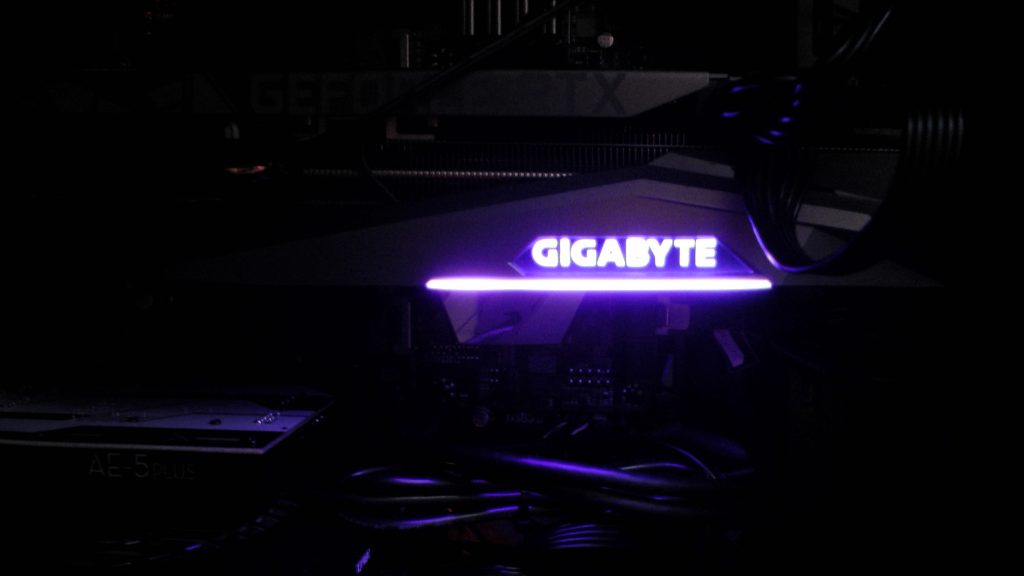 A negative aspect of the card is the 12V connections, which are looped through to the PCB. This makes the board generally a little bit more difficult for water coolers, but the board carries a reference board. So it should be feasible. But also the simple connection of the 12V cables becomes a test of patience, because the plugs simply do not snap in properly. In my eyes a clear design flaw of Gigabyte. People who install/remove their card often should avoid this model because of this.

Unfortunately, the voltage layout of the board is also a negative factor. I don’t know exactly what it is, but the card simply uses 20-30 watts more than the ASUS TUF 3090 with the same settings and comparable chip quality. This is particularly disruptive for undervolting. The additional power limit here compared to the reference is simply used to compensate for deficits in the board. It can be assumed that this circumstance also applies to other boards with a reference board and cheaper component assembly.

All in all a very good card, but with slight weaknesses in design. If you are looking for a good card with a reference board, which also has a very high power limit, this is the right place. Optics and cooling do not afford any weaknesses and the processing is also flawless except for the 12V connections.

Now we come to the actually more interesting variant with amps, the Undervolting of the GPU. The GPU here is more similar to Vega than Turing or Pascal. First a few general sentences. Very important first, the cards have P-States where they always set an offset to your set values, depending on the temperature. At 63 degrees, for example, this starts. This will result in your set value between 15-30 MHz on top! You must take that into account. There are 3 different ways to run the GPU in a more economical way, I will go into each variant in more detail below. Turn the page, please