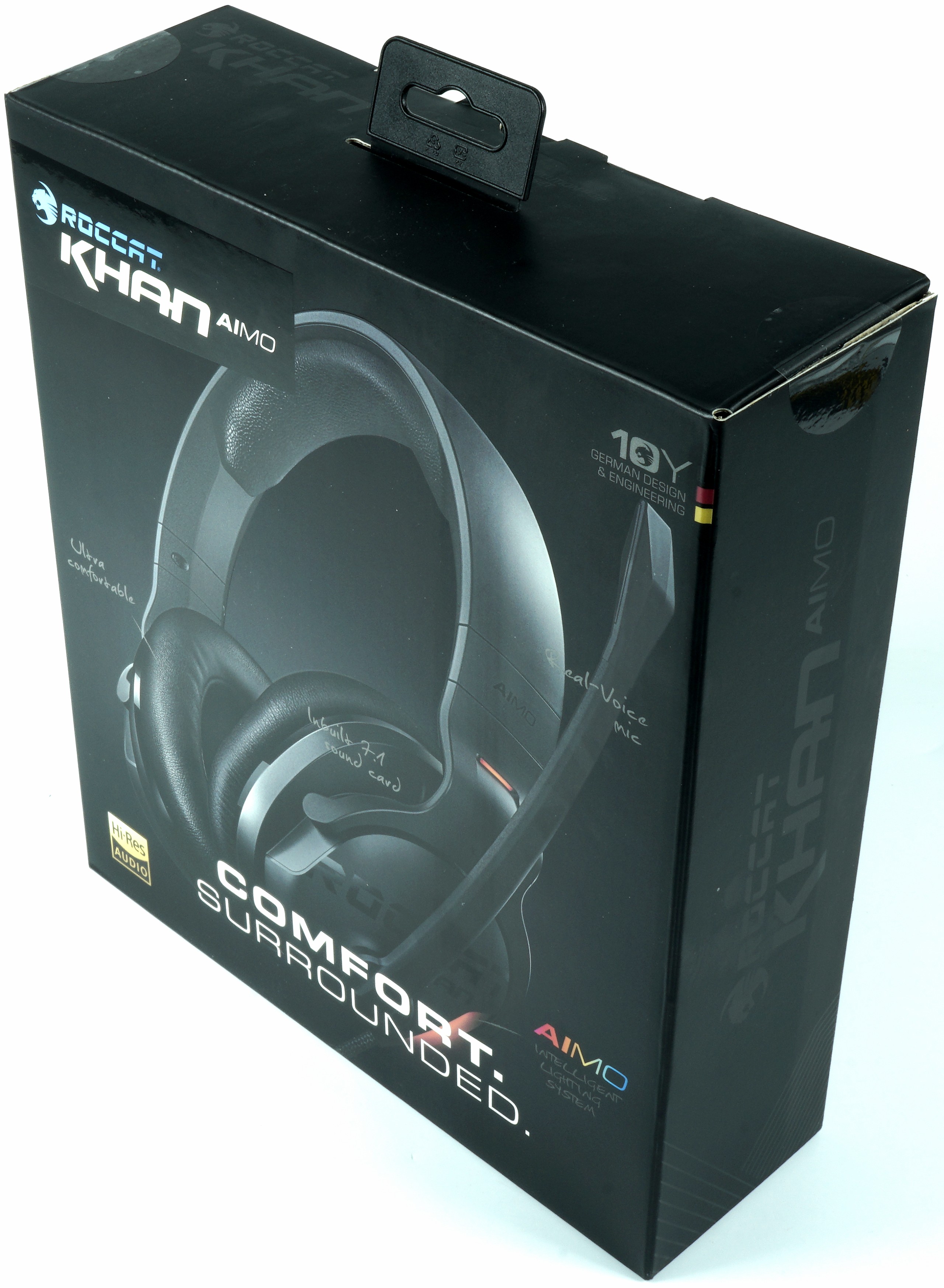 For currently just under 100 Euro (Saturn on offer from approx. 86 Euro) Roccat offers with the Khan Aimo the new edition or reinterpretation of the Khan Pro and wants to score with RGB and an active USB sound card. But this is exactly a point where it is worth taking a closer look and listening, as well as completely disassing the story. In order to be able to play at the forefront of this price range, you would have to do the usual forum recommendations of QPad, Kingston & Co. which are now even partially cheaper to have. Whether this is the case and what the headset can (or not) is what I will explain in this test.

The scope of delivery is very manageable, because you get the headset and the packaging with Asian air inside. That's it. The USB sound solution is installed in the headphones (I'll decompile all this later) and what you could do (but don't necessarily have to), would still be the manual download of the software. You might want to, because the sound improves a bit, because the default settings of the USB solution aren't really nice. But more on that later.

First of all, it is not HRA (High Resolution Audio), but the similarity has certainly not been chosen unintentionally. The JAS (Japan Audio Society) as the lead organization behind the label used by Sony for the first time years ago on its own record player writes e.g. for analog devices, that a "speaker and headphone performance of 40 kHz or above" can be achieved in the case of headphones (which is what is at stake). This label is not "awarded" either, but you have to pay for it.

In addition, the JAS does not say anything about the actual playback quality and the required parameters, but simply screws the upper limit of the frequency range up to twice the conventional transducer, but without any tolerance limits presupcinate. What sounds really good in the end, each company can decide on its own: "Listening evaluation process is added and final decision as Hi-Res Audio product to be proved according to each company's sound evaluation standard". But, of course, as always, I will listen to myself, measure it and judge objectively.

Visually, the black headset does not make a bad first impression at first, even the second look finds nothing really negative. It looks pleasantly timeless and almost restrained in its presentation. You can and can live with it confidently. However, the haptic access quickly reveals that it is a pure plastic solution, because apart from the head band with the spring steel inside, metal is completely missing from the body. In view of the price of almost EUR 100, however, this is a little, well, courageous.

Up to this point, we have already agreed that even simple elegance can convince and less often even more. Only the appearance of materials does not quite do justice to the price called. But given, because there are really worse things and you can even get used to plastic monocultures. And since you use a USB solution, RGB is not far away. The integrated multifunction chip, which also delivers the sound, is used to control THE RGB lighting, which is rather restrained with translucent inserts at the edge. But also with the Tear Down more.

Three axes and everything fits as if poured without pressing. You can really live with this, because the chosen solution with the two hinges is not new, but you don't have to reinvent the wheel when it's just running so nicely round. The adaptation to smaller or larger heads and various head shapes succeeds in any case without interference, which one knows to appreciate after at least one hour of carrying power. But even at these two neuralgic points, we cannot estimate how long-term stable the whole thing remains based on the choice of material. At the very least, one should avoid prolonged UV radiation, that can help.

The headband is sufficiently padded inside and it does not press anything even after a long time wearing the (without cable) 275 gram headset. In the meantime, compared to the first work, the processing has been improved, even if it still seems to be the same PU imitation of the PU.

The ear pads are still a bit soft and uncontoured, but definitely better than the first Khan Pro, where I was still able to admire baroque wrinkles like in Grandma's skirt. The whole thing is now possible, especially since the fastening has also been changed. The cushions now sit on their own frame, which can be pressed on the earcup. This requires caution and strength when loosening, but it works. 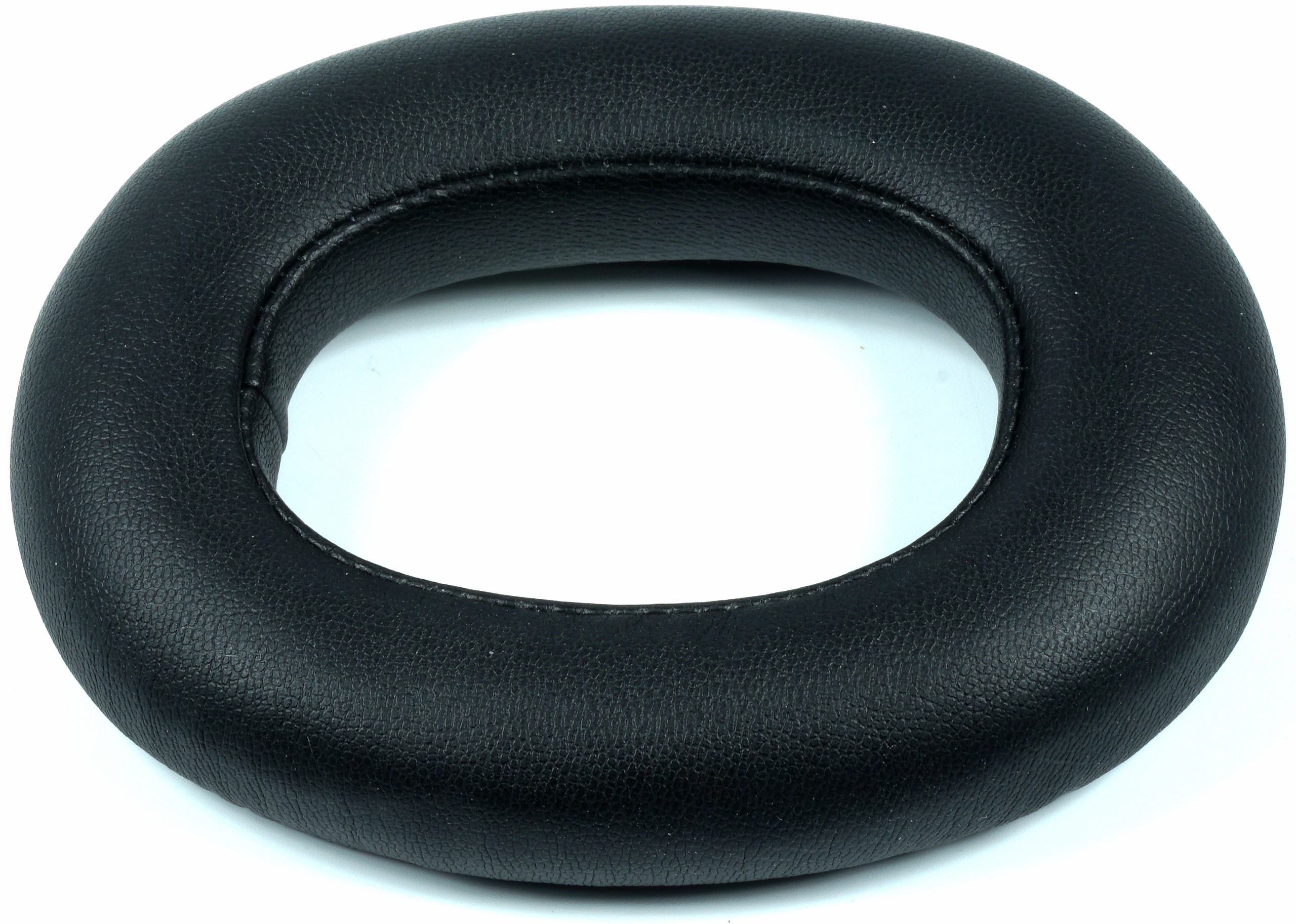 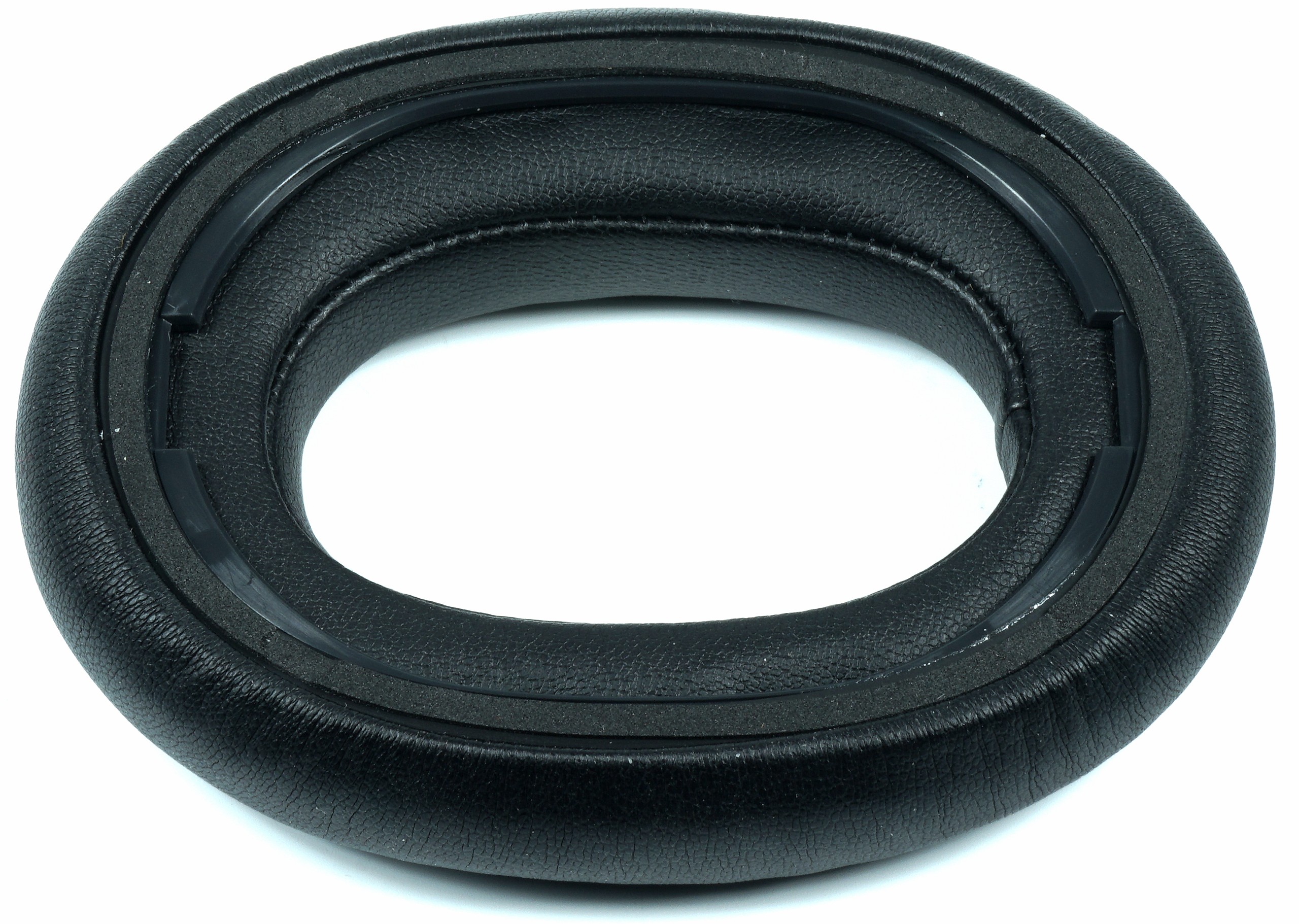 The small volume control does what it is supposed to do, but nothing more. You will certainly be able to find it intuitively, but it is not really reachable. The synchronisation is no longer an issue either, as the control is now unstarted and electrically controlled via the sound chip. Right next to it is the button for starting or shooting down the RGB night lighting. When you have the bow out, you can even find it without dropping the headset.

The mussels are screwed this time and let us also take a lossless look inside. But i'll be right next to the Tear Down. At least you can already see very clearly by the covering that the driver was arranged asymmetrically and also set at a slight angle towards the ear. This is currently fully on trend, but has yet to prove itself in the broad masses. The rotatable microphone arm is cleverly solved in the used ribbon form and memory function, the auto-mute function implemented in this way when folding up is very practical, because you can feel and hear the switching point quite clearly. However, the other person also listens to every movement clearly and since there is no low-cut, in extreme cases the louder membrane of the interlocutor sticks to the opposite wall.

Roccat Swarm has to be downloaded yourself, but this is not a hurdle. The installation is a bit tricky and dangerous because you install the optional (but required) distribution files from Microsoft (C++ Class Libraries, .NET Framework 4.5) in stealth mode. This is where you get an automatic Windows restart, which the distribution setups automatically force and that you can't cancel. What has not been saved is then gone. The GUI of the software is based on the QT libraries, scales well and is quite fixed. You can adjust everything you need, right down to the color of the LED.

The software also checks and installs firmware updates and itself. Loeblich. It's also nice that all this works without forced registration, thank you for that!

The moment of truth only becomes apparent after screwing up, at least in part. We see on the left the active shell with the cable connection and the motherboard, on the right the passive shell with the board for volume control and the RGB button. The soldering quality is ok, the boards are too. The tape strips, on the other hand, appear somewhat improvised, but are still better than tons of hot glue. 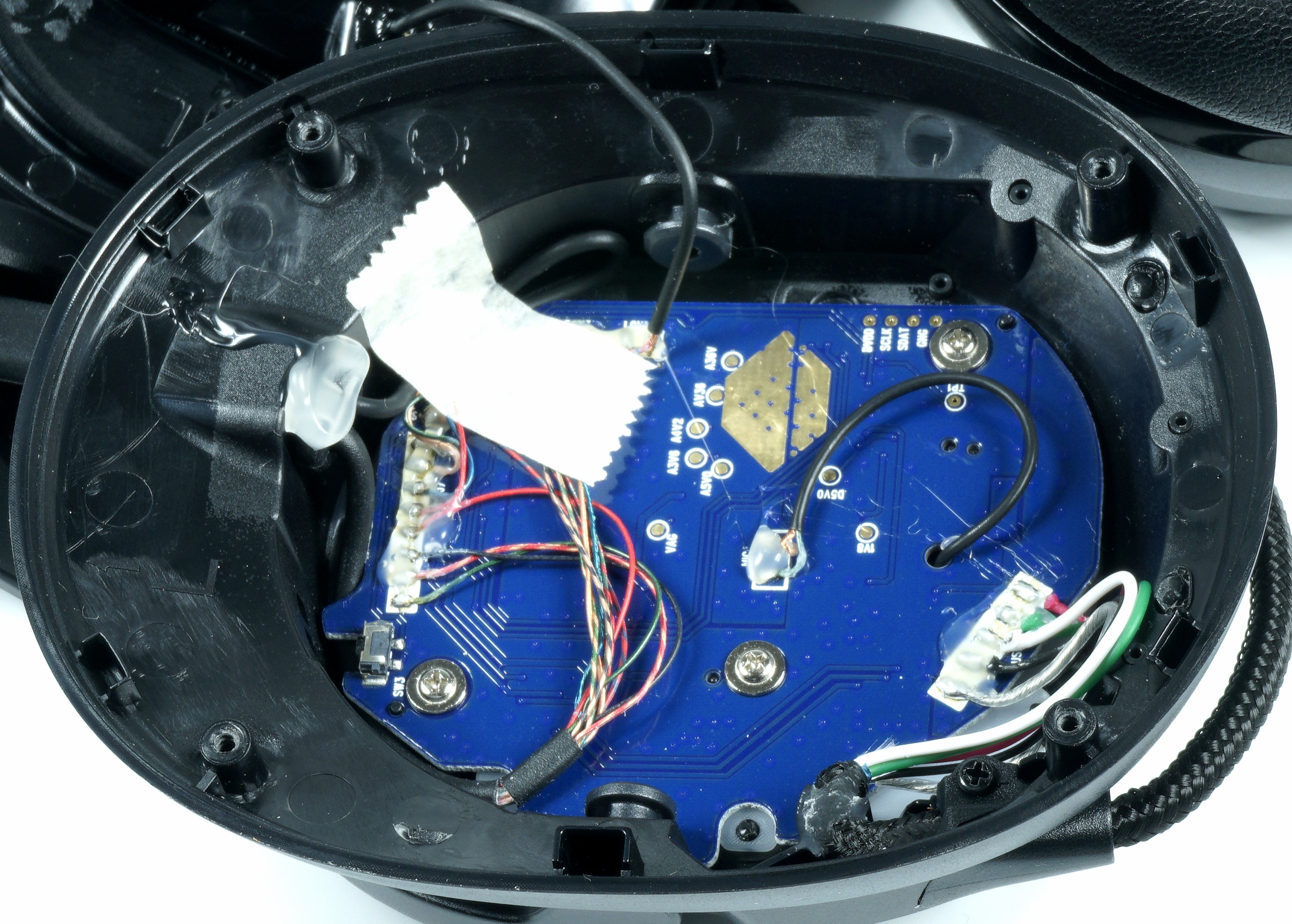 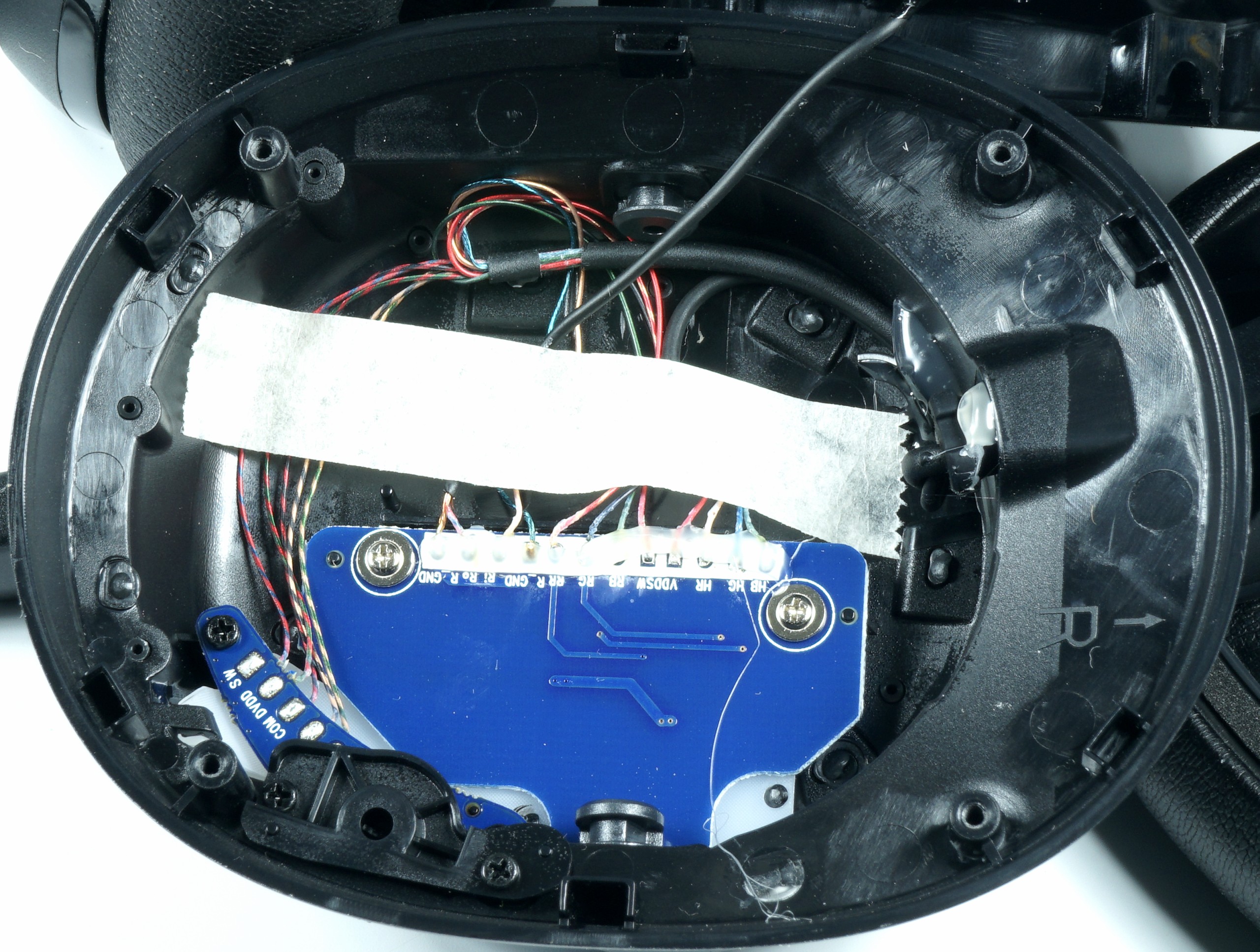 The 50 mm neodymium driver sits once again in a closed capsule and is not accessible, even if the back of the shell is screwed, still insoluble glue is used, which makes disassembly completely impossible. So I can't get any further here without having to completely destroy everything.

The chip of the sound solution used, on the other hand, is an old acquaintance: a CM6533X1 from C-Media, which, unlike the CM6533DH, cannot dolby. For this purpose, this chip combines DAC, amplifier and RGB control in one as an all-in-one solution. It includes an 8051 microprocessor, 256 KB SPI and 32 KB flash memory for the firmware, as well as a Tri-Color LED driver. And now we also come to analyzing the facts that this chip entails as a consequence.

You advertise with 32 Ohm and 99 dB SPL at one milliwatt in the specs. Of course, this only applies to the driver, but not to the overall solution! The CM6533X1 achieves a total output power of 15 mW (30 mW for both channels in total) at 32 ohms. This means that the maximum achievable sound pressure level (SPL = Sound Pressure Level) could theoretically be approx. 107 dB. This is not a small thing, but it is not much and is often lower in practice. 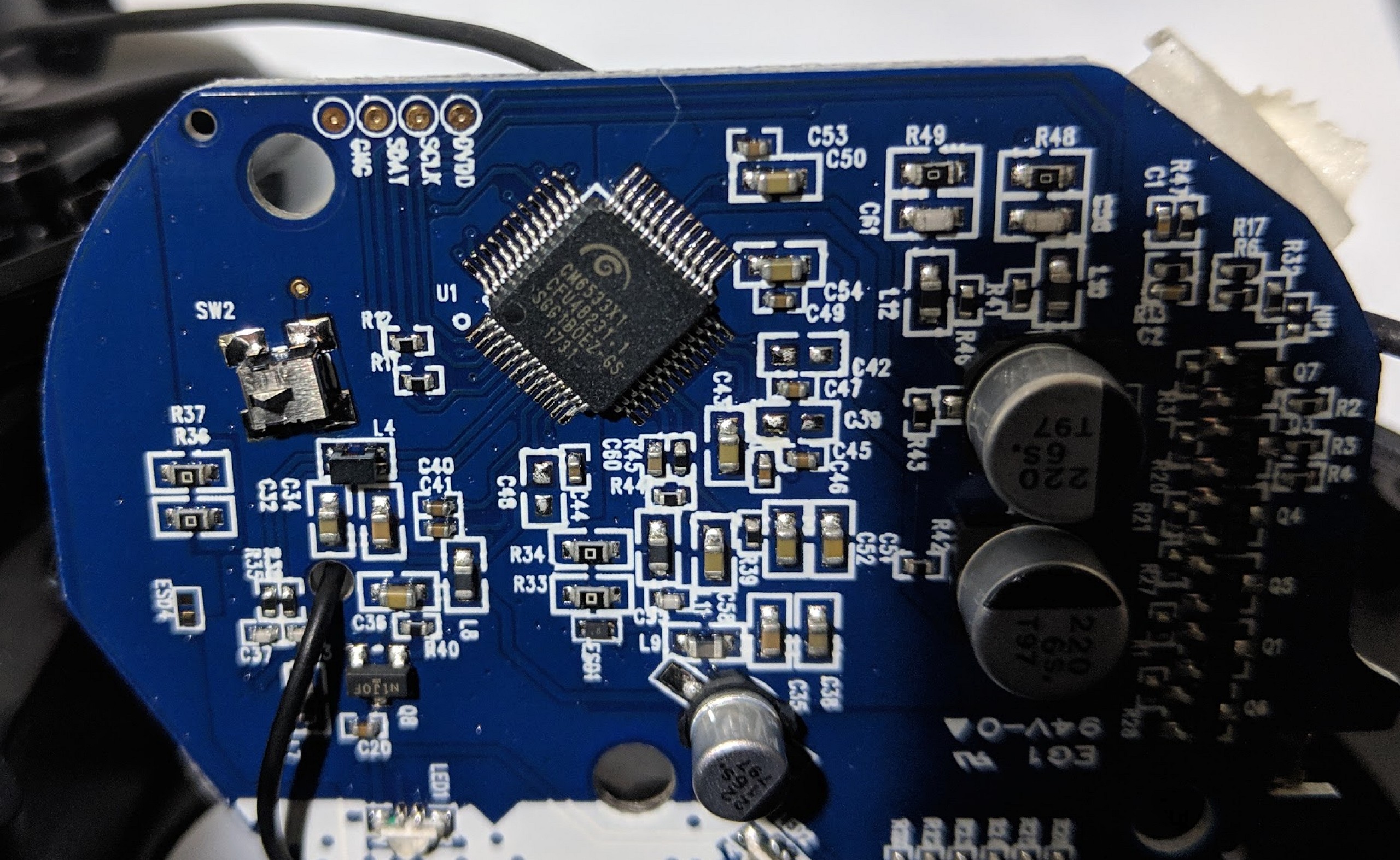 As a rule, 85 to 90 dB is assumed for a pleasant and child-proof sound pressure level and interprets e.g. the dynamic range for classic (HDR = High Dynamic Range) even with 30 dB more, so then a total of 115 dB! For gaming, shooters start with 16 to 25 dB, which would probably be enough in the end, but no longer offers any reserves. And even if the built-in driver might even be more and be much more level-resistant, the rather inexpensive USB sound solution will always be the limiting link here.

The DAC is good mediocrity, but acceptable. As an average listener in general, it is unlikely to be heard, whether this or a much higher-quality DAC is installed. The 96 KHz sampling rate with 24 bit is quite usable. The amp, on the other hand, weakens somewhat in the output power. The Xear sound processing of C-Media is quite mixed in quality. While the 10-band equalizer and all the level games are still quite usable, the surround implementation doesn't really look perfect. There are much better implementations.

But before we get to the actual test in practice, quickly all data and manufacturer information in tabular form: