I admit that motherboard tests are complex and often ungrateful for the tester, because the readership remains quite manageable, as long as it is, for example, an enthusiast platform like the Socket 2066. Nevertheless, I find it very exciting to observe what would be possible and also if you as a manufacturer make a little more effort in terms of design. And I even leave out all the PR keywords with relief, because nobody can buy anything for that anyway.

Sure, you can and must test motherboards for performance, but both the results of the usual CPU benchmarks and those of the memory tests are already so inconsistent with a single product that I find it almost honorable, since something with two or two want to compare objectively three products if the tolerance range of such runs, e.g. up to 2% (or more). Because the usual suspects like Cinebench & Co. are scattering. already much more. 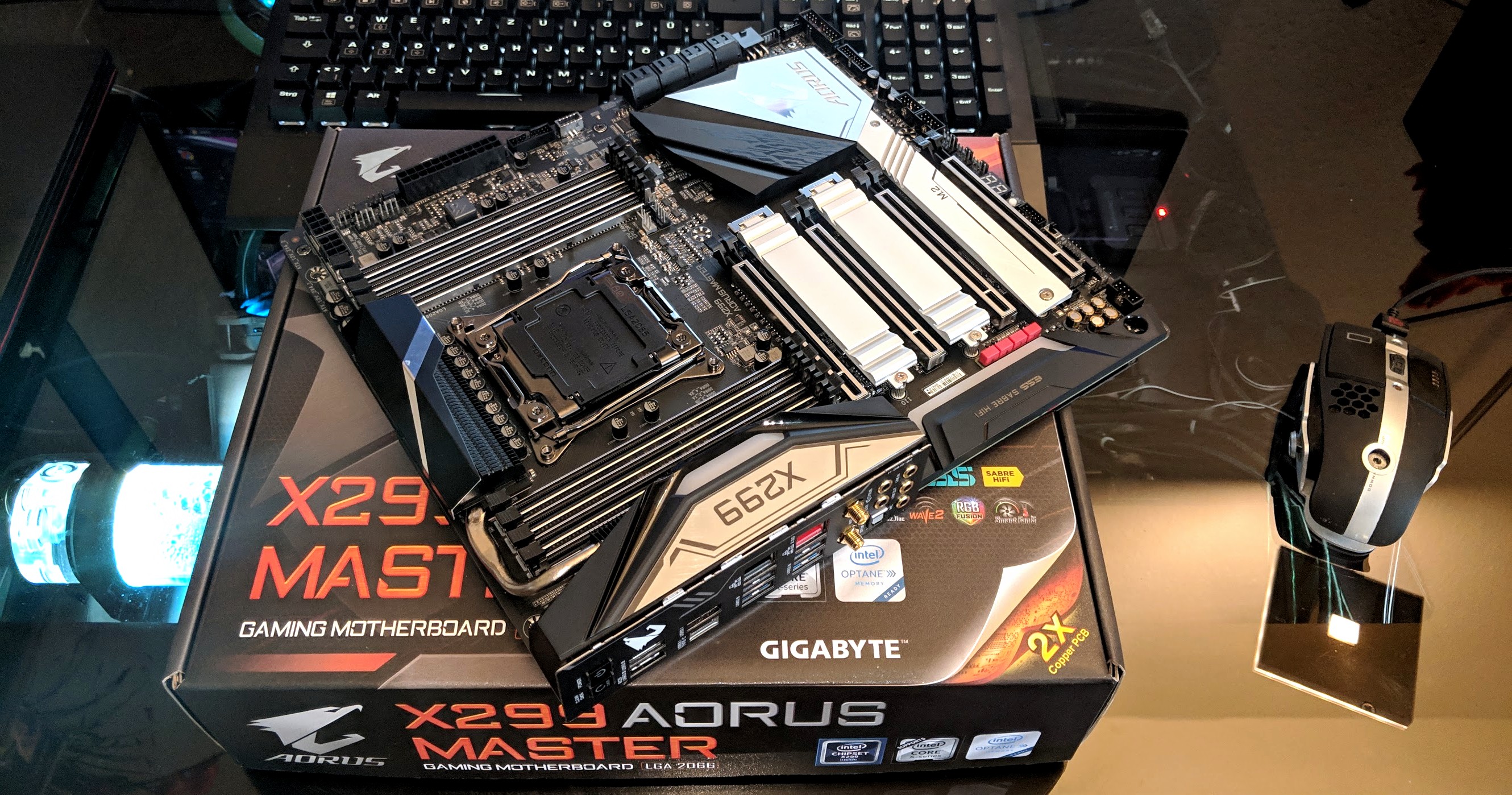 That is why, in this review, I will focus on the technical aspect and finally garnish the whole thing with benchmarks from reality. These tests will then also have to show whether the Board may have general weaknesses in certain areas. But I really struggle to create so-called leaderboards based on random benchmark situations because in normal life something like that means day-to-day form and when Windows coughs secretly, it's like re-dice three times.

By the way, I generally test offline and with a naked system, especially when it comes to the networks. Since the router is generally disconnected from the fiber optic network. For good reason. The rest is the usual procedure, so I don't have to re-describe and describe the entire operations in detail as long as it doesn't deviate from schema-F.

The fact that Aorus is the gaming-precious brand of Gigabyte and is supposed to form something like the counterpart to Asus' ROG in the end, everyone knows by now (almost) that. Then, of course, there is also the certain exclusivity or Luxury surcharge on it, but what's the point, as long as the equivalent is right and the overall package remains plausible. That's what I thought when I finally agreed to a test, because I was looking for a suitable board for our creator and workstation reviews. Aorus uses the E-ATX format, which should be taken into account when installing.

I don't want to spend long here celebrating the technical data and features, as well as a text-based unboxing, but now we also have YouTube and my channel from igor'sLAB. And since I was asked again and again why there is a supposed Deppenapostroph in it: it is the same reason as at the time with Tom's hardware. Outside of the German sensitivities, this is really the case.

Of course, I will not now take the readers into custody and call for the unconditional consumption of the moving images. Whoever (traceablely) refuses this medium, for whom I have the most important thing again in text form, because order must be.

The Aorus X299 Master is a top-class motherboard with the LGA2066 socket for Intel's Skylake-X and Kaby Lake-X generations enthusiasts processors. It is equipped with the X299 chipset ("Lewisburg") which supports up to 30 HSIO lanes (High-Speed Input/Output), as well as a maximum of 24 PCI-Express 3.0 lanes. In the logical sequence, the motherboard has four PCIe x16 slots, two of which are connected to the chipset with a full 16 lanes and the other two electrically connected to the chipset with eight data lines. This would result in the use of a 28- or 44-lane CPU even NVIDIA 4-Way-SLI or AMD 4-Way-CrossFireX configurations possible.

Equipped with a total of eight DIMM slots for DDR4 memory, a CPU with 28 or 44 data lines all slots are used in quad-channel operation and up to a maximum capacity of 128 GB. A 16-lane CPU supports dual-channel operation of four slots with a maximum capacity of 64 GB. Officially, DDR4 modules with up to 2,400 MHz can be used, whereby after overclocking clock rates of 4,000 MHz and more are also possible, which I also tested.

Three M.2 slots for particularly fast NVMe-M.2 SSDs and eight SATA 6G ports for 3.5- or 2.5-inch hard drives and SSDs (incl. RAID support) are available to the user here. The M.2 ports are connected via four PCIe 3.0 lanes and, in combination with the NVMe protocol, enable a theoretical data transfer rate of up to 4 GB/s. In addition, Aorus has equipped the M.2 slots with so-called thermal guards to keep the chips cooler. 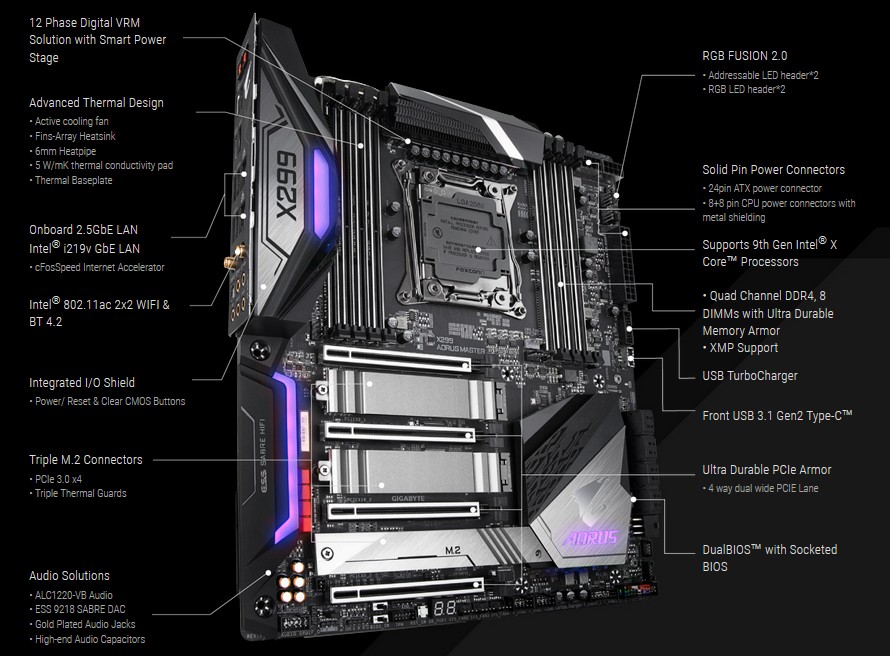 There are plenty of connectors on the I/O aperture of this performance motherboard. Interesting are the USB 3.1 port of Type-C and the USB 3.1 port, which rely on a controller from ASMedia (3142). For the necessary network connections, the Aorus Master has an Intel I219V LAN port and an interesting Realtek Gigabit LAN port with up to 2,500 Mbps, as well as Wi-Fi on Intel's 802.11ac standard (up to 867 Mbps). For the sound you use the quite neat Realtek ALC1220 codec and the ESS SABRE 9218 DAC, which is also to act as an amp.

As a feature overview, the manufacturer also has a list of the most important key points, which I do not want to close:

The new test system is not yet complete (we are missing e.g. microprocessor-controlled monitoring of all supply connections this time, but the basic concept is already in place. The Intel Core i9-7980XE is used, which can lead any motherboard gallantly into the worst case when it comes to power supply and thermal performance at the limit. The whole thing is also perfectly cooled with the Chiller, so that there are always the same conditions. 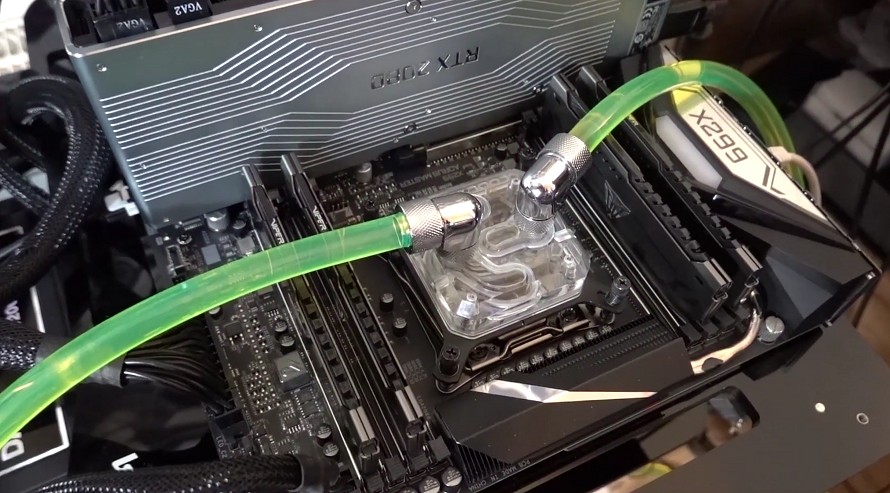 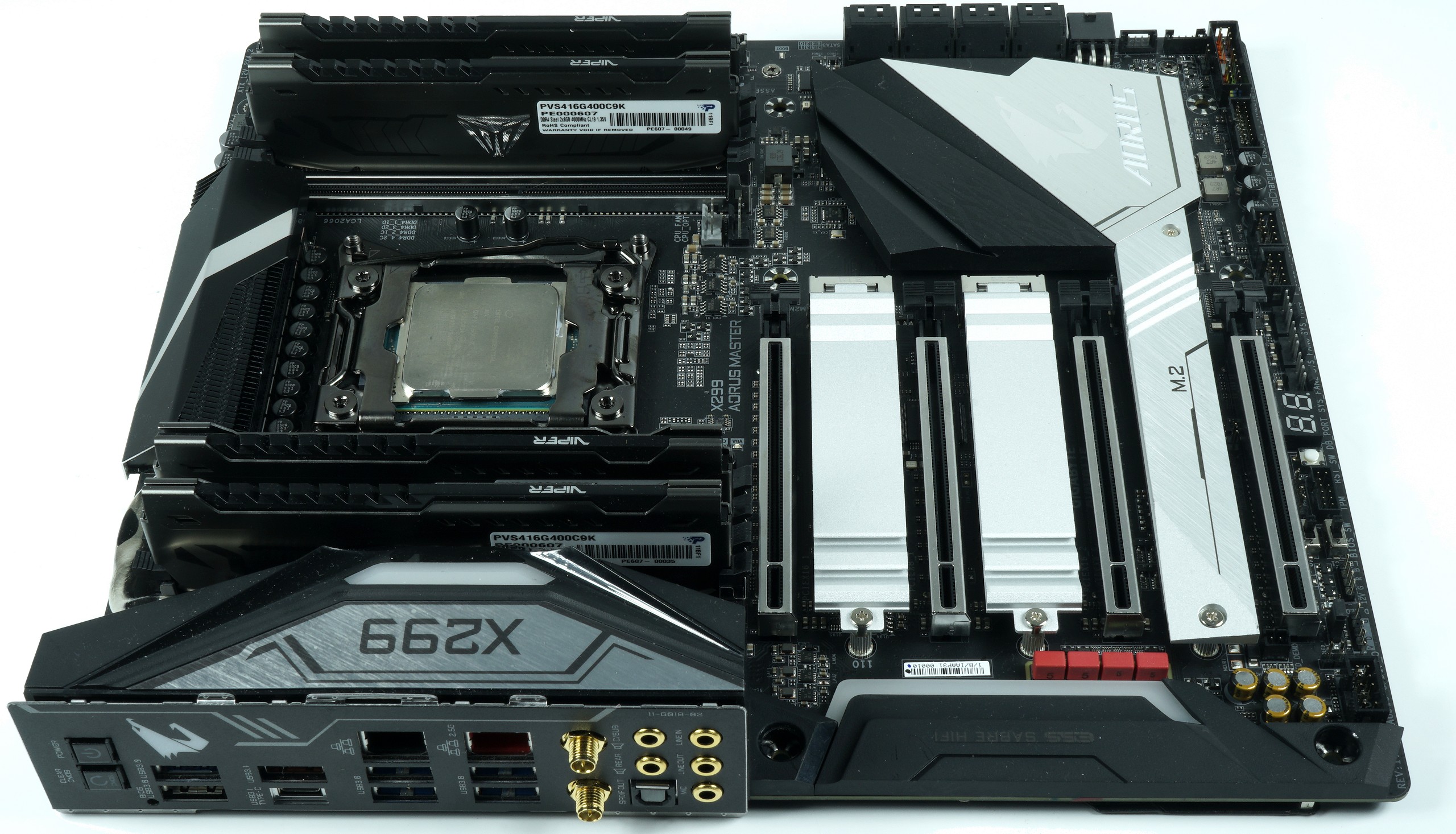 Nvidia GeForce GTX 1660 6GB with board partner cards from MSI – Something is moving (not just the pixels)
Roccat Khan Aimo in test – better than the Roccat Khan Pro or just different and colorful?