One finds the Realtek ALC1200 very often on beginner and mid-range motherboards, and if you google once or interpret the swarm intelligence of the relevant forums, there is also a frightening amount of half and ignorance in circulation. Some write from a highly labeled ALC887, others from a slightly slimmed down ALC1220. And the only right thing to do is: both are already completely wrong. The bigger and higher quality ALC1220 (2017) is even older, the ALC1200 came one year later (2018) and a completely different chip.

With an old ALC887 you can’t compare the ALC1200 either, that would be very unfair. The package of the ALC1220 is by the way not by chance bigger, because the functionality is, too. Nevertheless, the ALC1200 is no trash. On my way from a board manufacturer I was able to get the data sheets, which Realtek unfortunately still keeps under lock and key. At least I hope to destroy one or the other Urban Legend with today’s article. 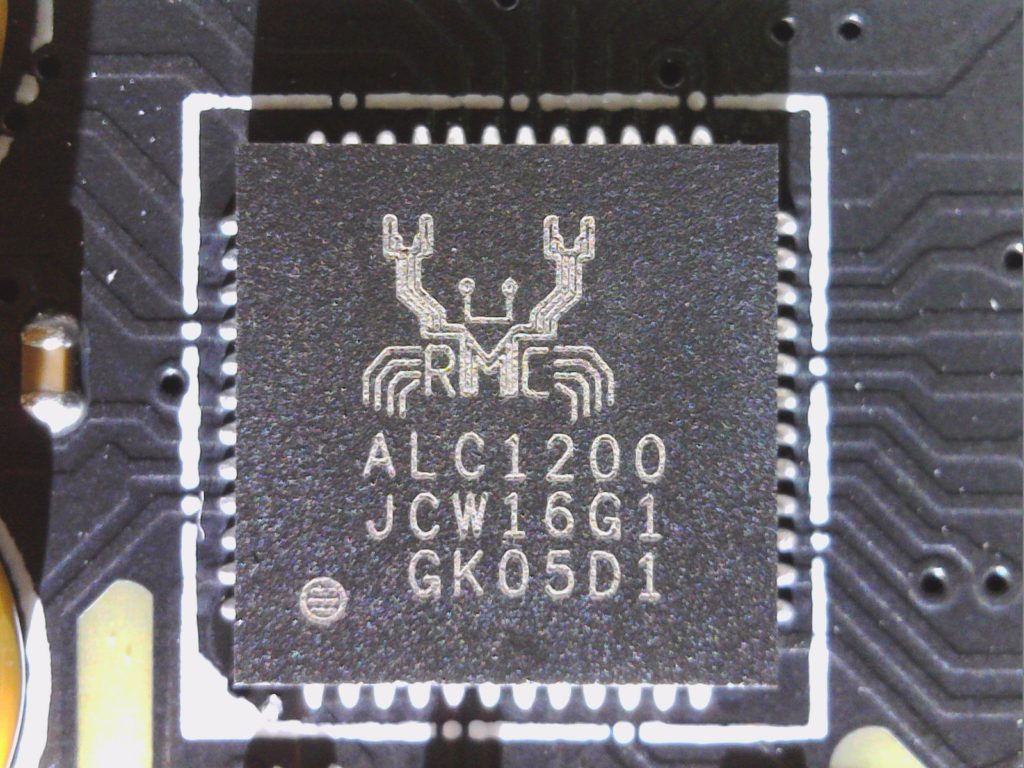 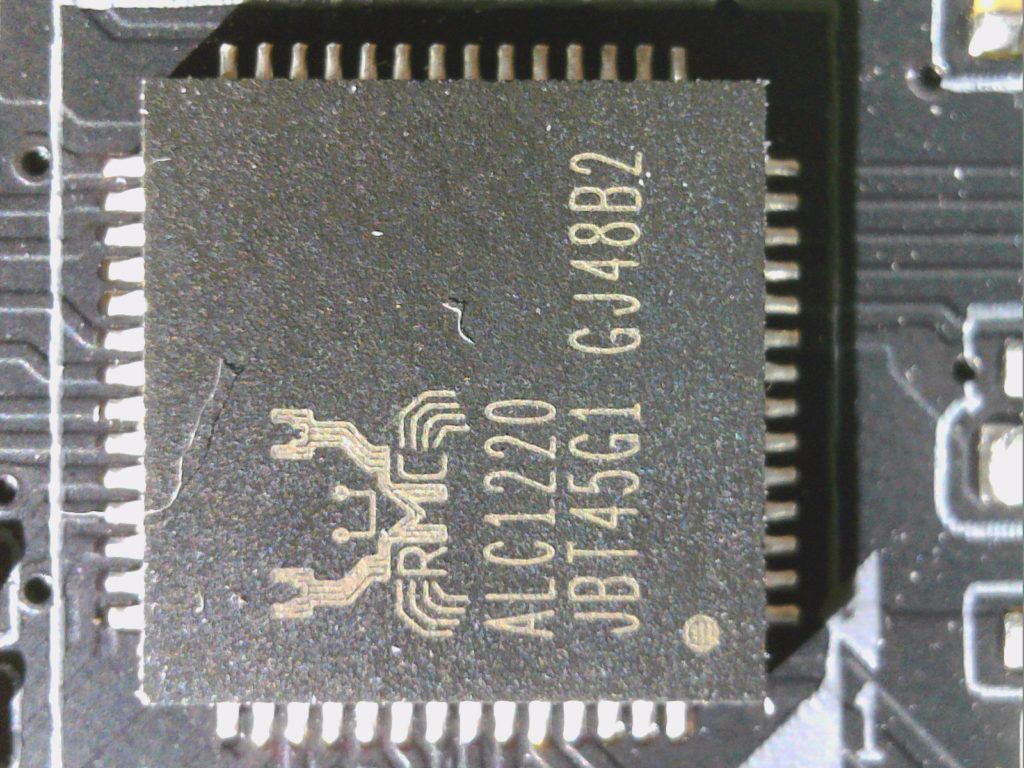 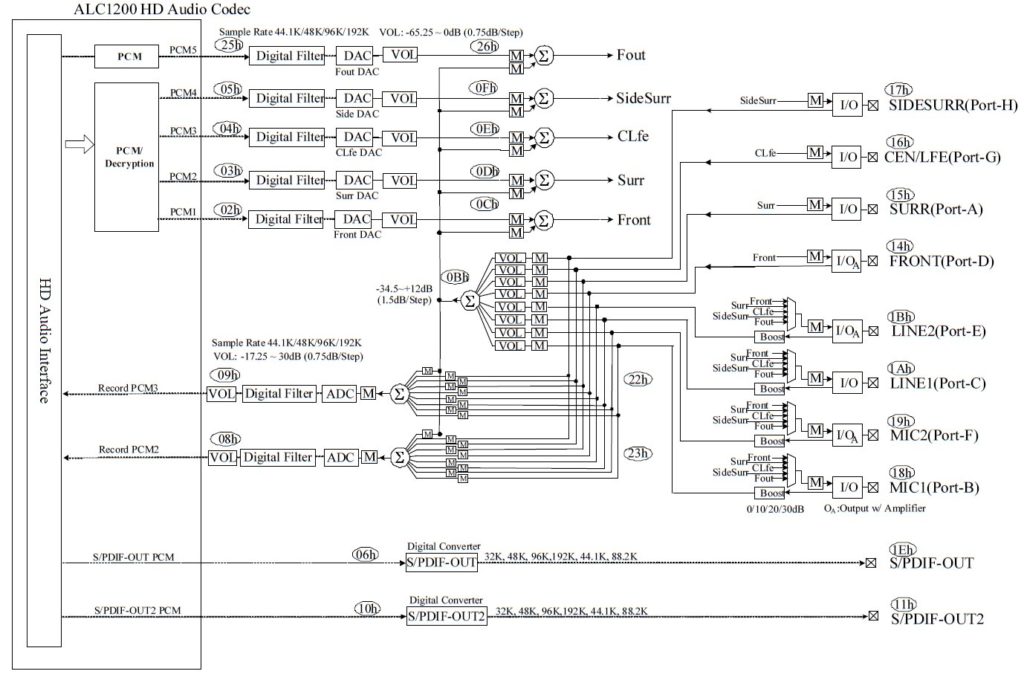 All analog inputs and outputs are input and output capable and all of them can also be processed by DSP according to user definitions. There are even three headphone amplifiers integrated at the analog output connectors (Port-D/Port-E/Port-F). These high output power headphone drivers deliver up to 30 mW into a 32 ohm load, making an external headphone amplifier unnecessary from Realtek’s point of view. The support of the 16/20/24-bit SPDIF output with up to 192 kHz sampling rate allows easy connection to HDMI-compatible devices or to various consumer electronics such as digital decoders and receivers. 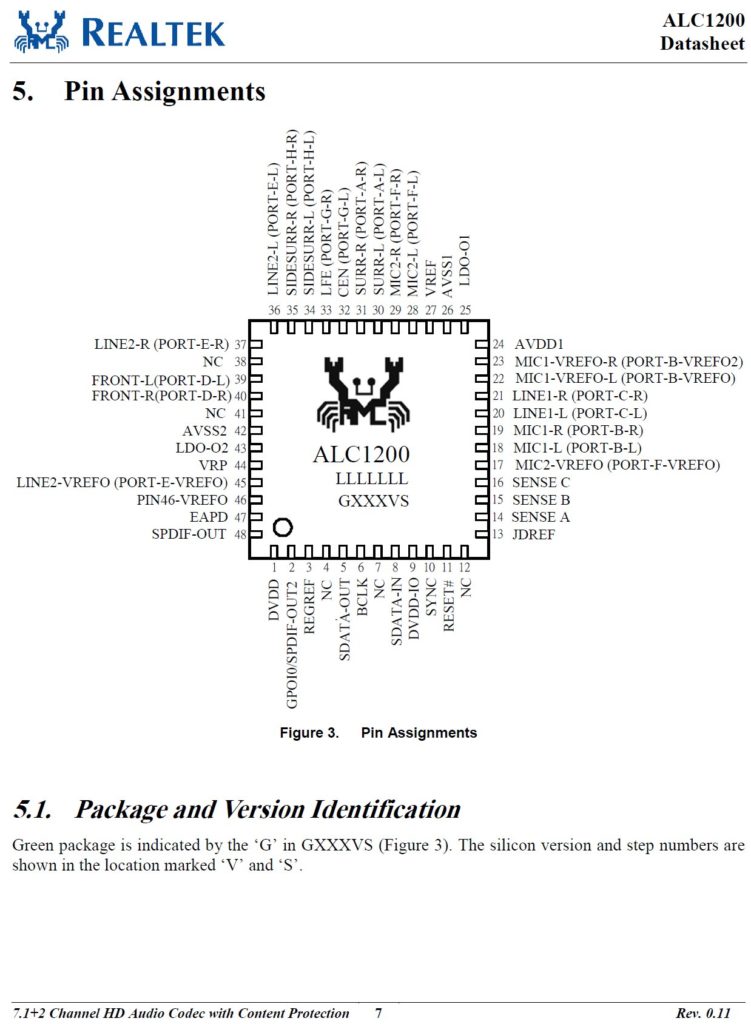 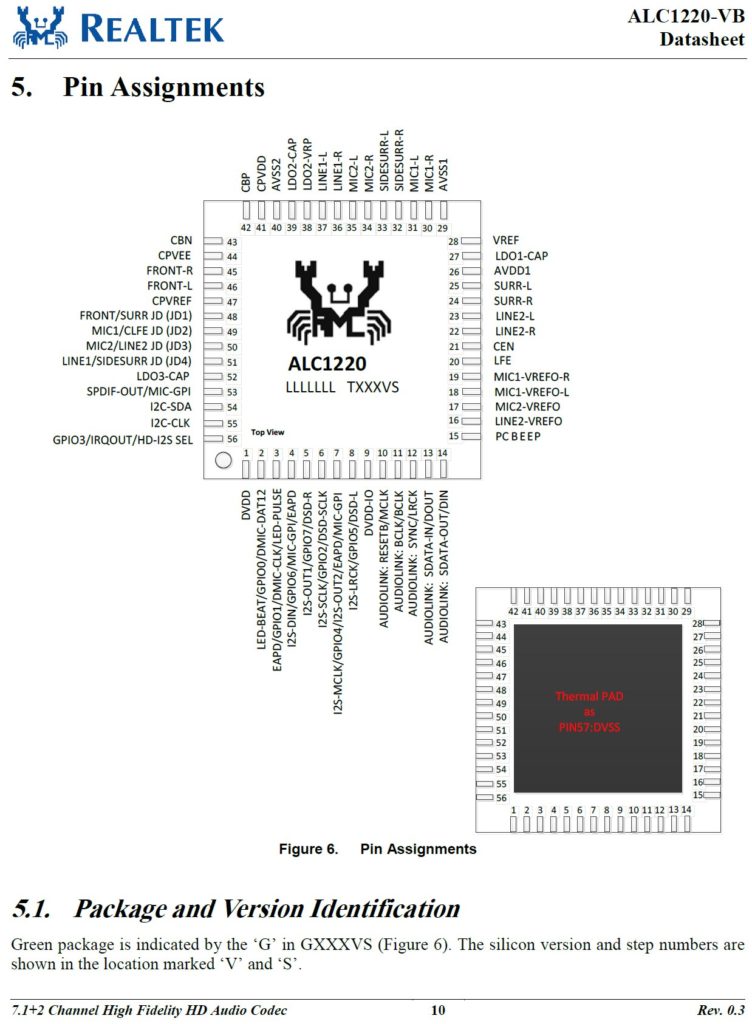 The differences to the ALC1220

The ALC1220-VB is also a SoC and high fidelity multi-channel audio codec with a bi-lingual interface, supporting High Definition Audio 1.0a and the industry standard I2S and I2C. The ALC1220-VB also offers DRM, 10 DAC channels and two channels for multiple streaming. However, the signal-to-noise ratio (SNR) at the front panel is now even up to 120 dB, i.e. 10 dB more. There are also three instead of only two stereo ADCs integrated and the line-in offers up to 110 dB SNR instead of the 102 dB of the smaller ALC 1200.

DRM is also not an issue, but the ALC1220-VB also has a Direct-Stream Digital (DSD) decoder and encoder to enjoy DSD stream content and create your own DSD streams with minimal quality loss due to DA and AD converters. The headphone amplifier at Port-D (front panel) is a so-called capacitor-free connector, which eliminates the need for an external coupling capacitor and ensures less distortion and fewer pop effects. This headphone amplifier at port D has a high output voltage of up to 2.1 Vrms and can drive high impedance headphones (up to 600 Ω), which is not possible with the ALC1200.

By the way, now you know why I always tell you to connect the headset to the front panel of such boards, but in general, the three (headphone) amplifiers for the output always work separately from the I/O shield and the front header for the HD car, with port D always being the front connector. Well, it should be. But I already had boards in my hands where exactly this was wrongly wired on the ALC1220 and Port-D was incomprehensibly unused.

The ALC is better than its reputation, but has some distinct disadvantages. The codec itself is absolutely ok and you will find at most a slightly higher noise floor in a blind test, but this depends strongly on the external circuitry and the selected gain. It is also a modern chip, whereby it is of course exactly one price and performance class below the ALC1220. The latter can also be used with higher impedance headphones, at least in the front audio, which definitely doesn’t work with the ALC1200.

As an end user, you can do without protocols such as I2S and I2C if necessary. The fact that DSD is completely missing is rather annoying in some situations. Then you might benefit from, say… the Nubert nuPro X-3200 is also nothing, because they could do that, but don’t get it delivered. But those who use the digital output or USB will generally not notice any difference, DSD and other sophistries are left out. Then it remains rather the question which third party software up to DTS is still supported. However, this is then a pure license question by the board manufacturer and not a hardware feature of the ALC1200.

Slime in the tubes including a long-term test – Particle filter, do-it-yourself filter and the follow-up costs of PVC tubes

MSI MAG B550 Tomahawk Review – Successful balancing act between costs and performance
NVMe SSDs in practical tests: What is the real advantage of PCIe 4.0 compared to 3.0 and is it worth the extra cost?