With the GeForce RTX 3060 introduced today, NVIDIA is now rounding out the Ampere portfolio on the downside for now. Since there won’t be a Founders Edition, I’m testing an MSI RTX 3060 Gaming X Trio instead, which shouldn’t be a problem in terms of comparability due to NVIDIA’s very tight TDP limits. But more about that in a moment, because the GA106 as a chip is new and we will have a closer look at it in a moment. In general, however, graphics cards are currently a sensitive topic, so that one has to separate very strongly between technical and emotional considerations. Therefore, let’s please leave miners, scalpers and the partly already megalomaniac retail sector aside for now and dedicate ourselves purely to the technology for the time being. I’ll write about the rest at the end, I promise. 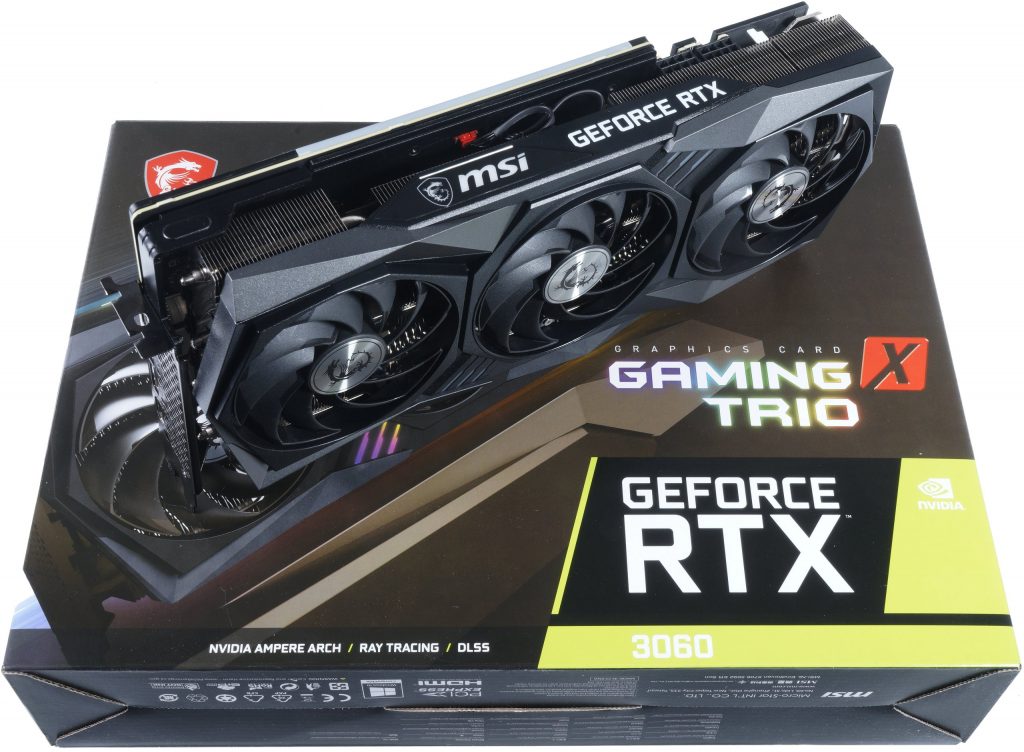 The chip of the NVIDIA GeForce RTX 3060 is based on the GA106 and is even significantly faster than a GeForce RTX 2060 Super in many respects, but is priced at an MSRP of 329 Euros. The RRP of the much faster GeForce RTX is only 70 Euros higher, but that’s almost right in relation. For the GeForce RTX 3060, NVIDIA uses a total of 28 SM of the maximum 30 units of the GA106 (see diagram below), resulting in a total of 3584 CUDA cores.

In addition to CUDA cores, NVIDIA’s GeForce RTX 3060 is also equipped with 28 next-generation RT (ray tracing) cores, 112 Tensor cores, 48 ROPs, and 112 TMUs. In terms of memory, the GeForce RTX 3060 also features 12GB of GDDR6 memory with a speed of 16Gbps, which has a cumulative bandwidth of 360Gbps on the 192-bit interface of the 6 memory controllers. 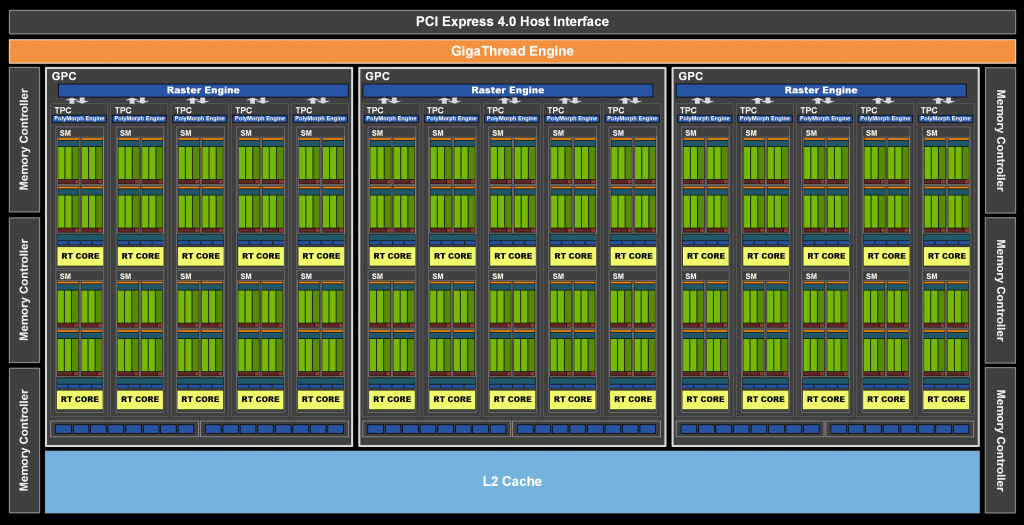 If you now extrapolate the 28 SM, you get the already mentioned 3584 CUDA cores. Ideally and only if all units are allowed to work with FP32. The gap to the GeForce RTX 3060 Ti is plausible, there is certainly no graphics card that fits in there sensibly anymore. But you could have really assumed that there would be a full 30 SM expansion with the RTX 3060. This way, however, NVIDIA can probably increase the yield in the end, which is not a bad decision considering the extremely hungry market. And you won’t notice the missing 2 SM. You just clock it a little higher and you’re done. Whereas that should depress efficiency somewhat, as we’ll see later.

Resizeable BAR has already been implemented on the hardware side, but this implementation is not yet fully functional. A retest will have to take place here in due course. So it’s really exciting to see what NVIDIA is now offering as a new entry-level RTX package, so while I’ll mostly be checking out the gaming environment today, I’ll also be checking out the production area as well. Because only then can you really do justice to a product. This also applies to the electrical conversion, the circuit board, the power consumption and the cooling. So reading material is already provided.

Now it’s straight to the point. We already know the constroction of the card from the Gaming X Trio as RTX 3070 and 3060 Ti. There we have the usual mix of plastic, light metal, and hardware, which the RTX 3060 is still going through the motions of and completely resembles its bigger sisters. The design with the 4.3 cm installation depth plus the 6 mm for the backplate makes this card a thick 2.5 slot design with all known advantages and disadvantages. It looks good, still feels quite valuable and you can accept the visual implementation, even if I like the elegant Suprim design much better.

With its 1454 grams, the card is a real heavyweight. The length of 32 cm is anything but short, and the installation height of 12.5 cm from the upper edge of the PCIe slot with the card installed to the top of the cover is also quite generous. The two 8-pin connectors on the top are an optical broadside and almost bragging and you will see on the next page on the basis of the board that you almost shoot with cannons on sparrows. There are also further details about the cooler design. Nvidia has logically omitted the NVLINK port. SLI is dead anyway and not wanted here.

RGB can be found on the top as a light bar (translucent plastic in the backplate, illuminated by SMD diodes on the back of the board), the RGB backlit MSI logo and two diagonal LED areas on the cooler cover between the fans.

MSI does not use USB Type C on the slot panel, probably because the VR hype has cooled down considerably in the meantime. Interestingly, AMD has added this feature to Big-Navi, while they seem to have already finished with it here. The new HDMI 2.1 port shouldn’t be missing, nor the three current DisplayPorts, of course. The very large cooling vents show which way the wind is (not) blowing, and that’s about it for the exterior.

The data of the MSI graphics card can be seen in the current GPU-Z screenshot, the rest I already mentioned above. The 1320 MHz base clock and the 1852 MHz boost clock are no longer a secret, just like the 1875 MHz memory clock and the memory expansion with 12 GB on the 192-bit interface. 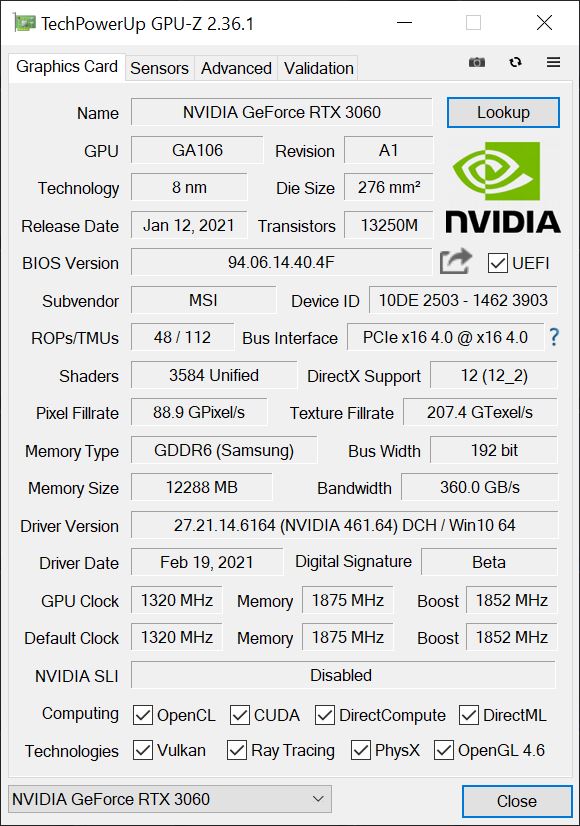 The benchmark system is new and is now no longer in the lab, but back in the editorial office. I now also rely on PCIe 4.0, the matching X570 motherboard in the form of an MSI MEG X570 Godlike, and a select Ryzen 9 5950 X that has been heavily overclocked water-cooled. Along with that comes fast RAM as well as multiple fast NVMe SSDs. For direct logging during all games and applications, I use NVIDIA’s PCAD, which adds to the convenience immensely.