On April 14, 2020 I had already teased the whole story about Minecraft for Windows 10 including RTX and explained the techniques behind it. That is why I am saving myself this new introduction and I prefer to get straight to the point. Minecraft RT, like Quake II RTX, relies on pathtracing of the complete image and that’s exactly what you can see – a crisp chin shutter flap right away with priced in. I had already written about the physical-based materials, the reflections, the global lighting and volumetric effects – just click the link and read it again.

Three things are required: a valid Microsoft account, Windows 10 in the latest build, and any GeForce RTX. Software-based raytracing on a Turing-GTX would theoretically be safe – but unfortunately only for still images. However, if you have met these requirements, you first have to download the free “Xbox Insider Hub” in the Microsoft Store, click on the “Minecraft for Windows 10 beta” for the content, confirm participation in the beta program and then download everything.
The six worlds, which I had already shown the day before yesterday, are then available for download as a map in the game. Install, open, activate RTX and DLSS and be happy. Despite the fact that the game even runs on a GeForce RTX 2060, if you leave it to Full HD for screen resolution, I was brave at times and loaded the map “Of Temples & Totems RTX”, which swallows the most resources. On Ultra-HD, even an RTX Titan oQuadro RTX went down to its knees.
The picture below therefore shows the use of a Quadro RTX 6000, whose 24 GB of video memory is still sufficient, even if it was already in the beginning in the direction of the 16 GB mark and this value has not decreased in the further course, the opposite was the case. With a bit of bad luck you end up with 18 GB or more. I have documented the screen from the start of the scene for all those who want to be amazed: Graphics performance: nothing works without DLSS 2.0

I guess Nvidia is relying on Quality DLSS in Minecraft, which significantly reduces resolution but can achieve the best DLSS result. The image produced above in Ultra-HD is actually rendered “only” in 2,560 x 1,440 pixels. But even that was already quite borderline in terms of resource needs. But, you have to admit that to Nvidia without envy, DLSS 2.0 shines once again. It looks, purely subjectively, even with better than native and without DLSS. You have to let that sink in first. 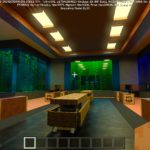 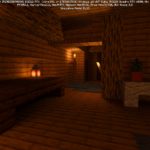 Which brings us to the six worlds. The one with the temple was border-brutal, the rest rather moderate to moderately sweaty. That’s why I grabbed exactly this map and added “Imagination Island RTX”, where the memory requirements can also be satisfied by the 8GB maps. However, I have to issue a warning here.

The keyword is “Raytracing Render Distance” in the Advanced Graphics Settings and the default setting with the 8 chunks (world pieces) are then also the maximum that you should set with a 6 or 8 GB map on the map “Of Temples & Totems RTX”. The middle position with the 16 chunks still fits the GeForce RTX 2080 Ti, RTX Titan or Quadro RTX 6000 and the maximum with 24 chunks then only runs on the RTX Titan or Quadro RTX 6000 without completely rotzed memory. You can still run this map with the RTX 2060 or 2060 Super, but it’s not really fun in this extremely demanding map anymore. Simpler maps such as  “Imagination Island RTX” brings some joy to the minimal FPS, which significantly increases the flow of the game. One thing is and remains a fact: RTX costs performance, but offers a really visible and overwhelming added value. You can now see Minecraft with completely different eyes.

Hot Diva: Unibos BR-TB3-X4 in review – portable SSD for the pocket with Thunderbolt 3 and small stumbling blocks
Patriot Viper VPN100 1TB NVMe SSD in re-review – Do the firmware and the NAND make the difference?