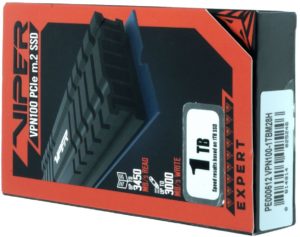 With the VPN100, Patriot recently launched another 1TB NVMe SSD, which relies on well-known components, so that i don't give up any puzzles in terms of assembly and which I had already tested before. But to use the current prices as a benchmark is going to be difficult, because the street price is running amok pretty much every SSD. A fast 1TB NVMe for 160 to 170 euros is now almost normal, apart from Crucial's usual price breakers, even if Patriot is on the usual, from the Taiwan Circuit Printed Board TECHVEST Co. Ltd. offers boards, which can be found almost in the same way in many products.

So why this follow-up or Second test? We'll see that in a while! Nevertheless, I already have a slight clone-sheep-dolly feeling beforehand, because apart from the firmware, this SSD resembles even the recently tested Sabrent Rocket 1TB almost like an egg to the other. However, the cooler of the Patriot VPN100 is pretty nasty glued and you only get it with a good hot air dryer. If you bend and pull too much here, you risk a veritable total damage, because the controller chip does not have a proper underfill, but lies rather hollow. Under load, the soldering pills will tear off under warranty.

For every user with normal skills and a motherboard with pre-installed SSD coolers, this NVMe SSD is eliminated. That is a pity, but it cannot be changed.

The SSD and its assembly

As with the previously tested VPN100 or the Sabrent Rocket, the controller is the well-known Phison PS5012-E12S, which has already been written enough and which I would locate in the midfield. However, there is little more detailed information for this iteration and the firmware used. In contrast to the Toshiba RC 500 SSD, which has also been tested, this is a widely used solution that is quite convincing in this price range.

… and then again from the back. Except for the serial number of the board and the stickers, everything is identical, up to the UL identification of the finisher and the board revision. The back is otherwise empty, which I find much better for cooling reasons. So here the 2TB and 4TB models are more likely to be equipped with modules, but not these 1TB SSDs.

The TLC NAND (IA7BG64AVA) of the tested SSD comes from Micron and is an iteration of the quite widespread Toshiba model, the SSD from the first test and the Sabrent Rocket on IA7BG63AVA. In the case of cache, all three models rely on Kingston DRAM, which is also acceptable.

Before I come to the measurements and my conclusion on the next page, I have attached the specs of the controller and also the manual as PDF. So reading material for the very curious.