I had actually been thinking about an Asus ZenScreen in the same size, because I would have liked to have had a portable monitor for both the smartphone and the notebook. But this monitor doesn’t have an hour in hands-on mode, because it unfortunately had a pretty good reflection and extreme halos. But the almost 270 Euros are a little steep considering the disadvantages and I started to look for a cheaper alternative.

You can get the USB monitor from M MEMTEQ for about 200 Euro, which is unfortunately still quite steep – but it is cheaper and much more matte. The part is not even badly made, even if it has some other small disadvantages, which I will explain later. Nevertheless I kept it because of the lower price and I don’t want to withhold the test from you. Firstly, you don’t always have to carry a heavy notebook around with you when a smartphone does, and secondly, a screen extension is often worth its weight in gold when working on a notebook. Especially when you have to do several things at once.

The scope of delivery is ok, as you get the display with magnets in the back, a hinged cover that can also serve as a stand, a data USB cable with one Type C plug each, a mini HDMI cable for the notebook and a USB charging cable including a power adapter. In addition there is a screen protection foil (which unfortunately shines) and a manual (even in German). The monitor does not contain batteries.

Let’s start with the positive. The light metal housing is very cleanly processed and the gap dimensions are even very good. The display fits perfectly and there are no missing areas at the edges. The torsional stiffness is completely ok, nothing will sag if you just lift it at one corner and hold it in the air. The whole thing is also an anthracite-coloured coated unibody, where the back and frame have been pulled from one piece. Waves and folds at the corners are not visible. Plus.

The operating elements and connections are located on the two short sides on the left and right. This is ok in principle, but unfortunately it prevents upright operation in this form. The manufacturer also advertises with it, but I still wonder how this is supposed to work. That’s because the USB power supply is on one side and the HDMI port on the other. It is therefore not possible to be plug-free on both sides. On the right are the on/off button, the toggle switch/controller for the OSD and the USB charging port. In the middle you can still see the opening for the 1-Watt speaker.

It is of course also available on the left side, in addition to the 3.5 mm jack socket for the audio connection, the USB-C data connection and the mini HDMI socket. There is no more to connect. Furthermore, the panel has no touch function, which is a pity, but mostly dispensable.

In my opinion, the shell, which can also function as a stand, is somewhat too weakly magnetized. I would have liked a more durable solution, especially for the train. Nothing has fallen over yet, but it has not only been close once. It really needs to be touched up. I have found a remedy by means of an extremely strong neodymium magnet and now the part stands like after a blue pill. But not every customer will probably have such extremely attractive and repulsive things available. 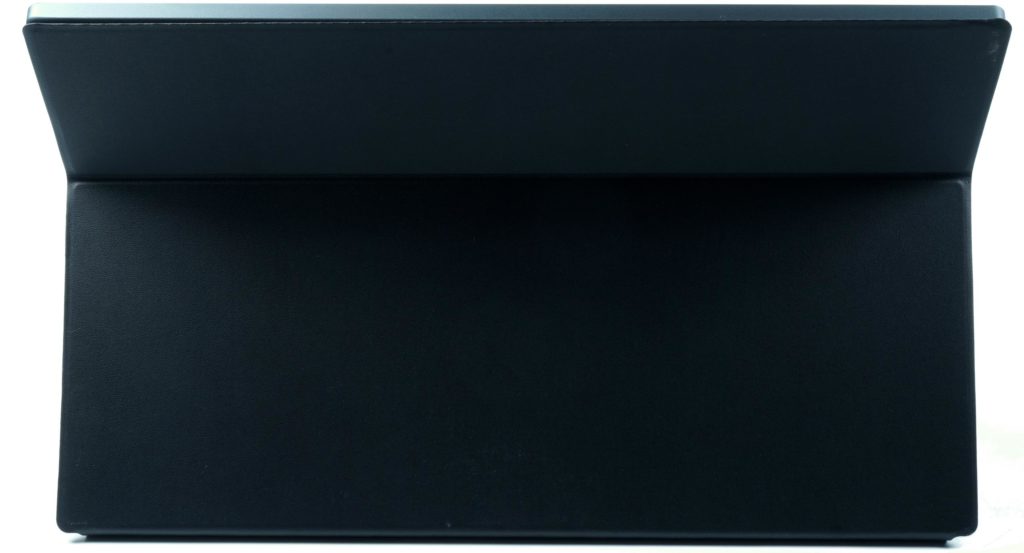 Before I come to the actual test, there is of course a quick summary of the technical data in table form, then we go to medias res on the next page. Because a further introduction is not really necessary. It is after all “only” a panel.