In keeping with the hot season, we have once again dealt with the active cooling of CPU, GPU and other components and use our tried and tested and very successful tutorials for years. We have now... The Heatspreader If you cut through a CPU once in the middle, you can see very clearly that the actual processor chip (which) only makes up a part of the total area and thus only part of the externally visible metal cover... Uneven and with gradient As if the misery as such weren't big enough, the CPU manufacturers put one more on it. According to the just mentioned unevenness of the surface, the respective heatspreaders of both manufacturers are also available in the outer form of a... Reference to our How-To article If you want to get much further into this topic and even plan a conversion yourself, take our big how-to-guide at this point: graphics card cooling and thermal paste optim... Thermal guide pads for advanced users: miracle or glare? First, let's make sure that pad can never replace the thermal paste for the CPU or GPU. They should only be used to remove other components such as Voltage converter (VRM), ... Cleaning and grinding The a and o for a good success and the adhesion of the metallic liquid is a clean and above all grease-free surface on the radiator floor and CPU heatspreader! Of course, the most suitable are the rivers... Why four different measurements for the charts? At the time, we had collected and evaluated many suggestions and wishes of our readers in the forum, which led us in the end to the decision to use all thermal pastes with water cooling as well as... Let's start with the AiO compact water cooling, as it is currently the most used form of water cooling and is safe enough for the inexperienced. The Liquid Metal Pad has a burnin, so we can control the CPU for a short time... Under air, the deltas get slightly larger, but the order remains roughly the same. Here it becomes clear once again that very good pastes can already tend towards liquid metal, if you really have the spin out when applying. Much... The boxed coolers and everything from the entry-level segment that uses push pins or AMD's holding clips can't apply so much pressure that the tougher pastes can hold their own. This is especially true of the diamond pastes and Kingpin Coolings KP-x,... We quickly remember the extra chapter. The only conductive solutions we tested for this were the paste-like conductonaut slated by Thermal Grizzly and Coolaboratory's Metal Pad. The rest is too hot... Consistency is always a smaller or large spring foot for newcomers, because with increasing viscosity, the paste is then also what is called tough. The actually excellent Kingpin KP-x is such a classic representative, the si... The thinner a paste is, the easier it is to handle. However, other criteria are also taken into account here, because some pastes pull nasty threads when tearing off, which remind you of cheap Gauda on hot spaghettis. It's... Summary One should not expect miracles from (however expensive) pastes, but a significant improvement over the normal average. Nevertheless, in the end, it is often less important what you pay for a paste and what the...

In keeping with the hot season, we have once again dealt with the active cooling of CPU, GPU and other components and use our tried and tested and very successful tutorials for years. We have now summarized these content in terms of content, at the request of many readers, into an article and updated them in terms of content to the extent that we felt it necessary. In addition, there are also measurements of various thermal pastes and pads, which we have now integrated as charts. Nevertheless, before the actual results, we want to go a little deeper in order to be able to better understand the problem. 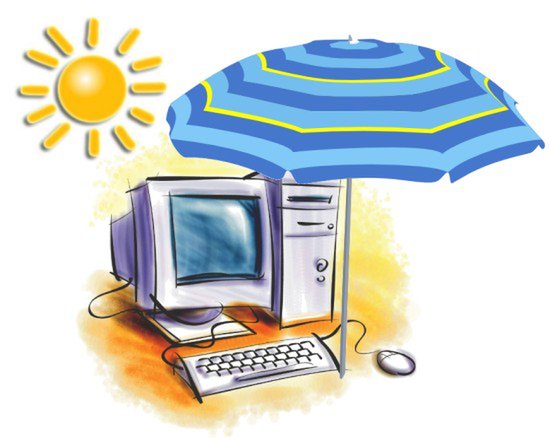 If you count later and find 87 chart entries, be reassured: we didn't calculate toothpaste and the sticky cream for the third parties, because that would be too much of a good thing. Or isn't it? Let us simply be surprised at what dental care products can do.

Inner values: Paste is not equal to paste

With the real products comes of course also the variety and thus the agony of choice. Their exact composition is in almost every case a well-kept secret, but the margin is not so great and the most important components could usually even be googled. Almost all pastes for CPUs are designed for a temperature limit for continuous operation of approx. 150°C, some even go up to 300°C or higher.

The composition of a paste then also determines the theoretical thermal conductivity, its electrical conductivity, viscosity and long-term durability. But what exactly is in it? The simplest pastes contain for the most part only zinc oxide and silicone as a binder, but are hardly offered as a serious product in this classic form.

Most suppliers rely on a mix of this base and other encores, such as aluminium. For example, the Prolimatech PK1 with 60-85% aluminum content, 15-25% zinc oxide and 12-20% silicone oil, as well as some antioxidant a classic representative of these metallic pastes. More mysterious is, for example, Be Quiet with the DC 1, for which you specify 60% metal oxides, 30% zinc oxide (is zinc not a metal?) and 10% silicone. 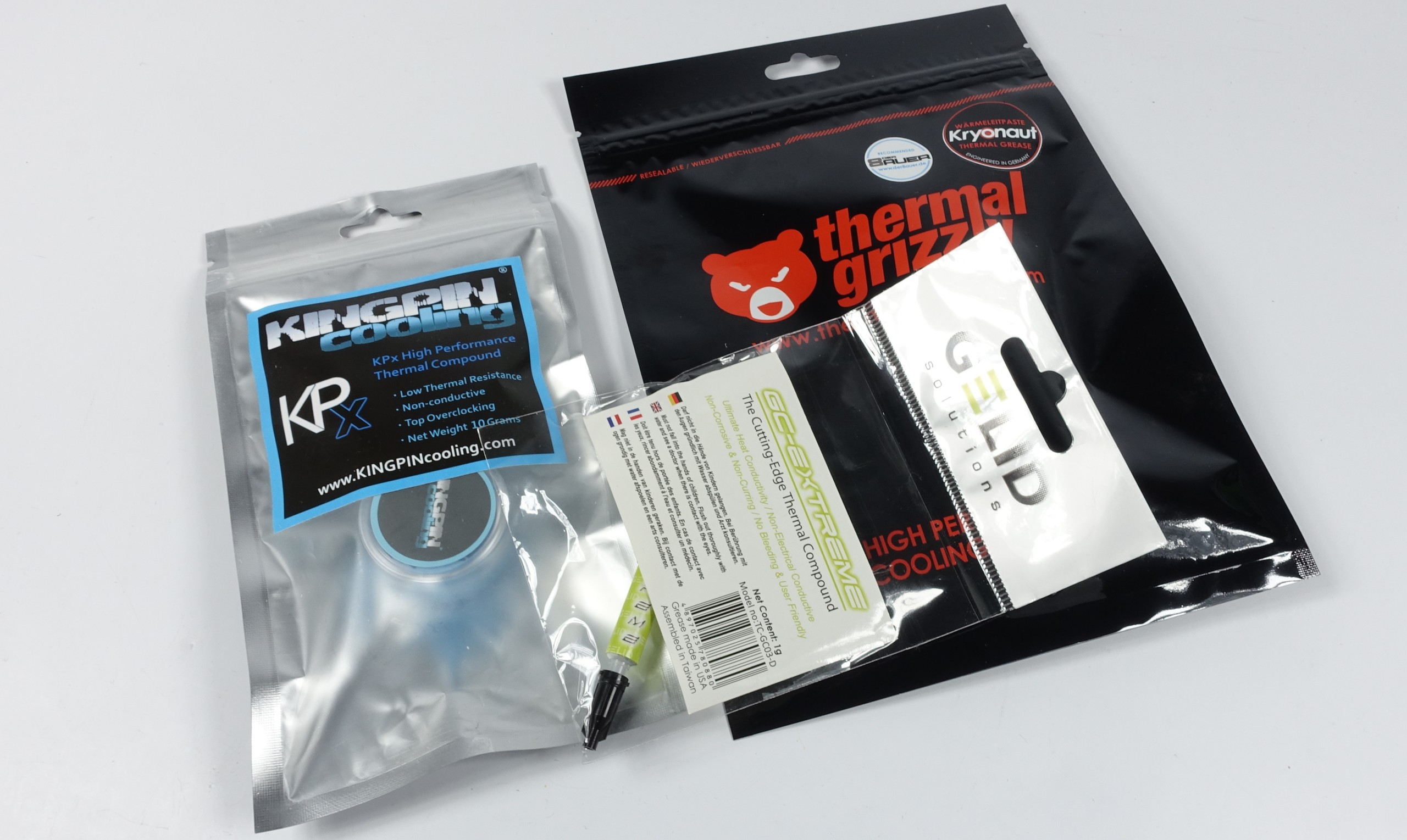 Three of the best thermal pastes on the market today

In addition, in this class you will find e.g. also individually designated additions made of silver (e.g. Arctic Silver 5). Graphite-based pastes such as the professional WLPG 10 from Fischer Elektronik, on the other hand, are almost always silicone-free, achieve very high thermal conductivity values (10.5W/m-K), but in turn can usually be processed much more cumbersomely and are also almost always electrically conductive.

Carbon nanoparticle pastes are aimed in the same direction, but are also rather unsuitable for our purposes due to their good electrical conductivity and price. Copper-based pastes have become rather rare, but they are still there (in sporadically).

However, silicone as a popular and cheap binder is quite creepable and so manufacturers strive to at least limit or limit this unpleasant property. completely dispense with silicone. This also applies to the so-called "oiling", in which the paste dissolves into its basic components and the silicone simply creeps away.

But: there are only a few real (global) manufacturers of thermal pastes or their basis, which is then often only more or less marginally individualized by third-party companies in order to establish a "new product" on the market through different consistency and color. The rest is marketing – and very often just wishful thinking. Many differently labelled pastes are even (almost) identical in the end, but can differ considerably by the price. In addition, physics and chemistry cannot be raped.

As you get older, you get slower

Another point that we must not conceal for a reason is a possible serial fidelity and, above all, the overrun of the storage period of these products. Manufacturers usually specify up to three years for the period of use of unenlisted packs, but all too often forget the imprint of the actual production date. Of course we would like to thank you for this tip from the forum.

In the test field, for example, we have both the Diamond 7 and Diamond 24, which differ only in the pack size, with the Diamond 7 faring significantly worse. Both pastes differ, although in any case quite tame, again significantly in their consistency. So it may well be that such a rather expensive and almost exotic product is stored forever before a customer has mercy on it and buys it.

Conversely, it is often helpful, at least preventively, to buy these things in larger shops with a larger goods flow or from a local dealer, who can also give you information about origin and/or storage time.

The difference in quality between a cheap third-party paste and what OEM manufacturers use is smaller than you think – and often non-existent. It is also not uncommon to achieve a leap in performance simply by carefully screwing the components together and then, of course, crediting this to the new paste.

Very cheap silicone pastes like Arctics MX-2 or MX-4 are easy to apply and do not cost the world, but they bring nothing out of work and are long out of date. Improvements will hardly be achieved, rather a deterioration. This applies to conversions as well as to a newly assembled PC. 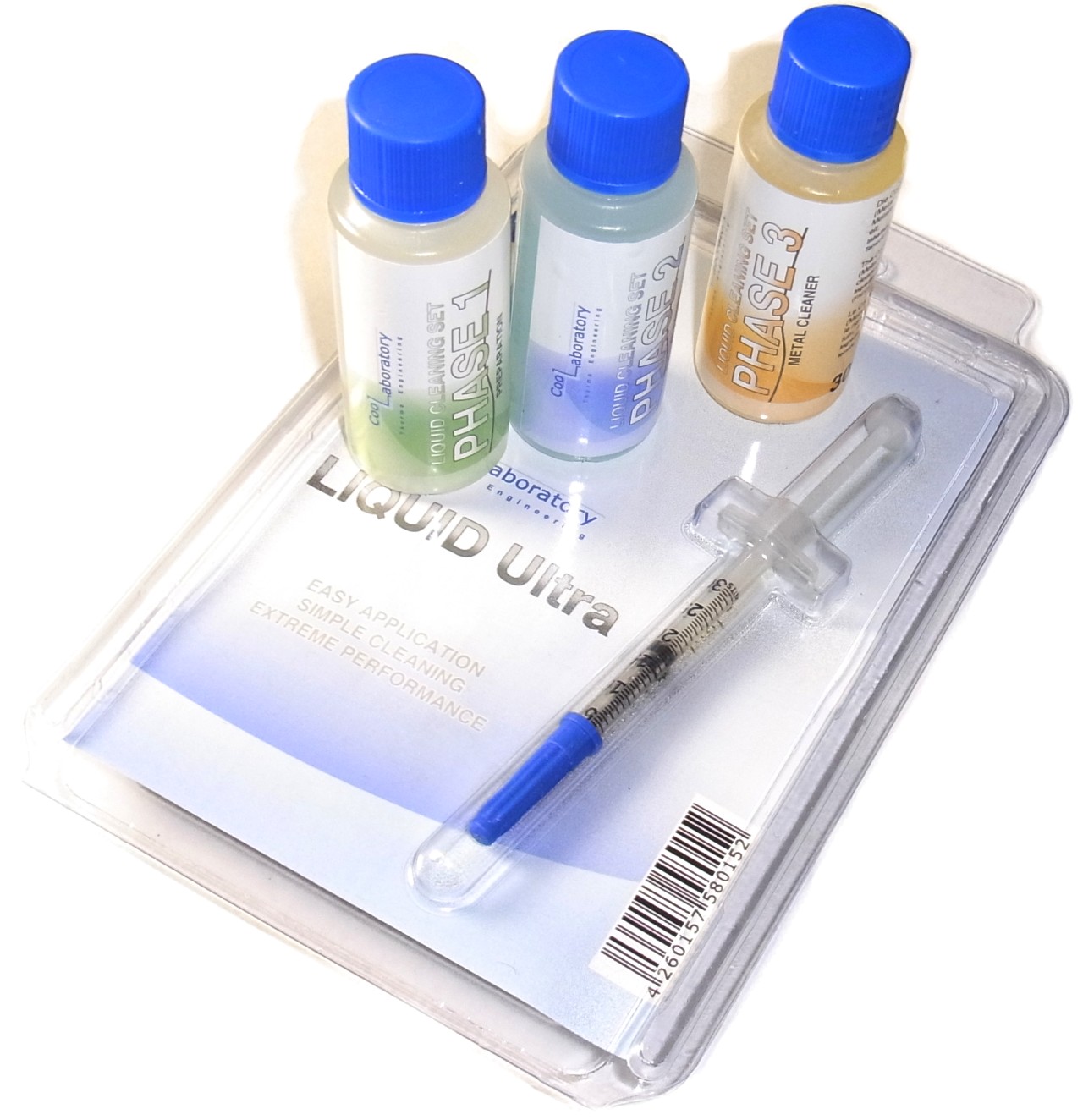 Liquid metal is rather something for experienced users and professionals, because the process is difficult to master and you then have the problem with the possible warranty or Warranty, because these "pastes" can never be removed without residue and without a trace, if a hardware defect occurs.

The application of these highly conductive pastes and the problem of suitable material surfaces is not without its problems, so we will deal with them separately.

However, in order to achieve an above-average performance, it definitely makes no sense to use only mediocre to good products, because here the effort tends to outweigh the benefits. You really have to dodge very good to outstanding pastes if you want a measurable and palpable success compared to the general average and then also realize the perfect application of the pastes.

Apacer AC730 1TB in review – The unbreakable hard drive on the go? (With videos)