Who doesn’t know them, the multiple entries of the supposedly same graphics card and the annoying consequences of this registry collecting mania? Sometimes you don’t even consciously notice this and then wonder why a new graphics card of the same chip type suddenly runs unstable after a replacement. DDU is certainly a solution, but then everything is gone and you start again from zero on the driver side. And no, it doesn’t only hit AMD graphics card owners and their MorePowerTool insecurities, but also the friends of the green faction. And it also makes Windows startup much slower if too many cards are recorded and the operating system has to pick the right entry first. 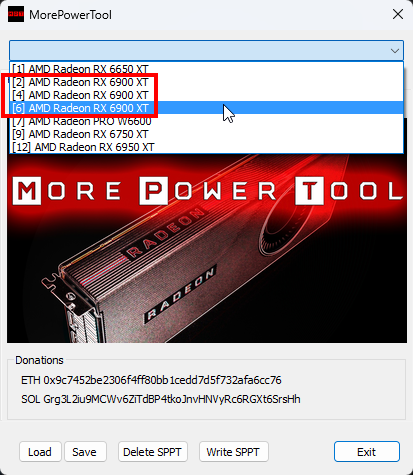 Even when benchmarking, you have to be careful if, for example, you have replaced a Radeon RX 6750XT several times. Then, for example, something like this happens in the picture below, which completely falsifies the results. Silent BIOS vs. OC BIOS as an extreme example. Unfortunately, the silent BIOS is active at the moment (see picture below). Much too high boost clock and much too low base clock, whereby the registry actually even used the ancient entry of an RX 6700XT, including incorrect PowerPlayTables by the way. But NVIDIA owners shouldn’t laugh too soon either, because I had a similar effect once with a GeForce RTX 3080 Ti SG from KFA2, which couldn’t keep the clock rates of the previously installed MSI RTX 3080 Ti SUPRIM and constantly crashed. There is really no question that there is still potential for optimization here. 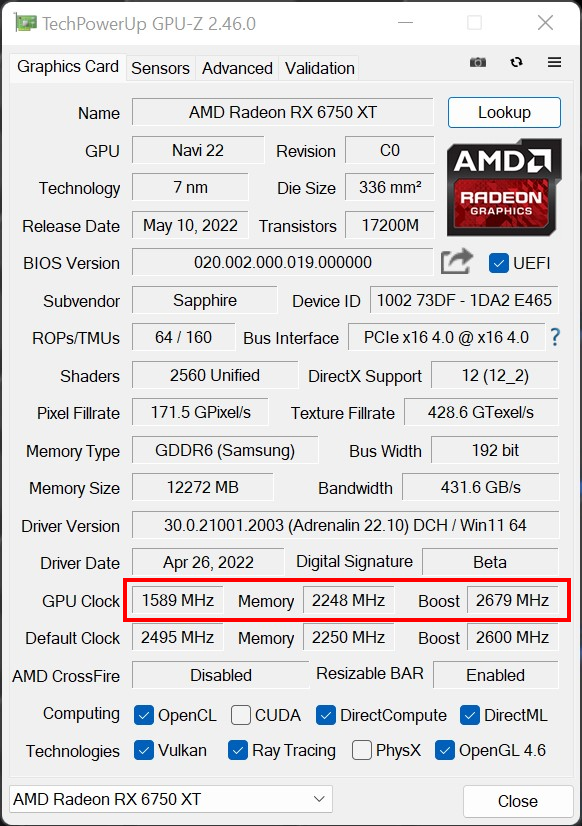 Chaos in the registry and our new tool as a remedy

If you look into the registry for the example with the three entries for the Radeon RX 6900XT, you will also see three very similar entries, two of which are too many. At the latest when the MorePowerTool is to be used, good advice is expensive, because which card is actually the active one? And you don’t even have to have a different card installed, sometimes just swapping the monitor or port is enough to create a new entry.

This is exactly where our new tool comes into play. It lists all graphics cards and their variants that have been in the system and whose residues are still stored in the registry. The program itself must be started as administrator (right click on icon -> properties -> compatibility -> run as administrator) then it also works with the listing and its cleanup: 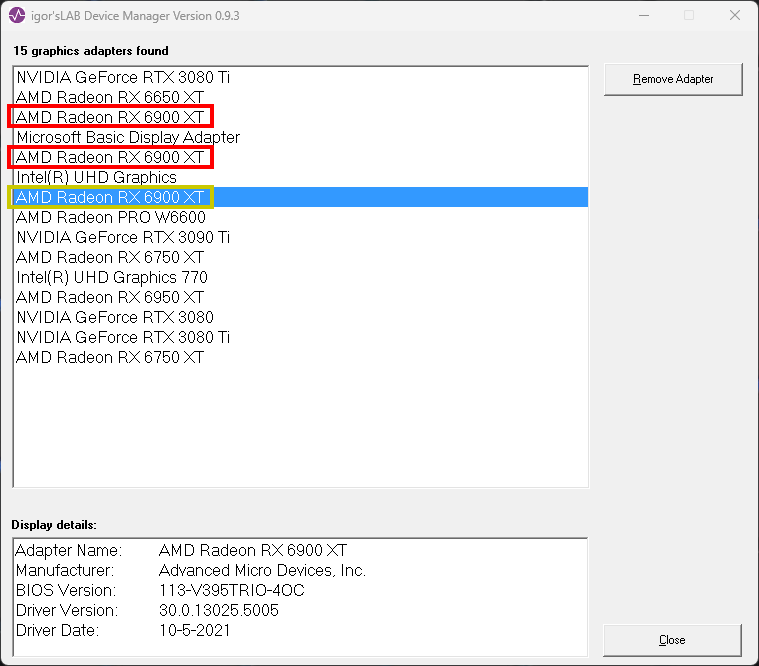 If you click on one of the listed entries, you can at least determine from the driver date which one is the older one and can go away. This is done by clicking the “Remove Adapter” button after selecting the adapter. This has the unbeatable advantage over DDU that you can preserve individual entries and also keep the driver in the original. After editing and deleting, however, you should definitely restart the computer once.

If you delete all of them (or at least the currently used adapter) and then restart, you may not see any available adapters in MorePowerTool. However, this is not due to our tool, but to the peculiarities of certain driver versions, which show this behavior even when DDU is used. Then it helps to install the graphics driver over it again (without having to uninstall it completely first). This is a feedback to all who reported such errors with the MorePowerTool from time to time.

I came across it only after searching for the first community requests while debugging the MPT and finally got up the nerve to program the cleanup tool right away. So far, I have always manually cleaned up the registry before every benchmark run, because the mere driver uninstallation unfortunately does not help against the multiple entries. AMD and NVIDIA should urgently improve this. A bit of recursive deletion in the keys is really not witchcraft.

The software is free for all users, but certainly not completely free of all possible bugs. Even though I have tested it for a long time, often enough the devil lurks in the details. Therefore your feedback is also welcome and as always use at your own risk. However, this registry section is rather uncritical and required keys reconstruct themselves automatically. Nevertheless, I must of course preface this with the usual disclaimer, also for my own safety. The program that you can download from our site is virus-free and has been tested several times in this regard. However, since registry entries are touched, the heuristics of certain antivirus programs may well cause warning messages. However, this can be safely ignored as long as we serve as the source.

What the leaks about NVIDIA’s new cards are good for, what is true and why kopite7kimi sometimes seems to be “wrong”
Edifier Airpulse A200 Active Speakers Review – Great Feast for the Ears at a proud Price